Battle of the Titans
Nears Conclusion

Communities around the U.S. — and more than a few Boeing and Airbus managers — are waiting for news of which aerospace giant will build the next generation of airborne refueling tankers. 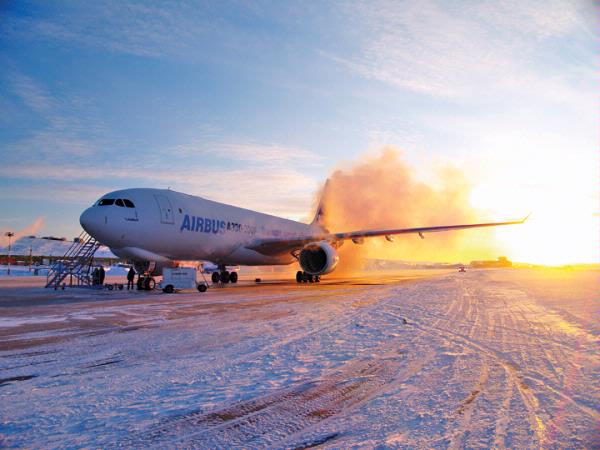 ew industries are as coveted for their capital investment as the aerospace and defense sectors. On the high end, projects employ highly skilled people at high wages, and they routinely trigger additional investment from such suppliers as makers of advanced composites and components.

These days, few contracts are as coveted or anticipated as the one that will go to either Boeing or Airbus — the US$35-billion replacement order for the U.S. Air Force’s 179 KC-135 aerial refueling and tanker aircraft. The two aerospace rivals have been competing for years for the nod to build the new generation of tanker. The current aircraft, the KC-135, is based on an Eisenhower-era airplane, the Boeing 707, that stopped flying passengers years ago in most parts of the world.

Boeing’s bid is based on a state-of-the-art version of the highly successful 767 airliner, which first took flight in 1981; the Airbus bid uses the also-successful A330 airliner as its underlying airframe. The government is expected to name the contract winner by the end of 2010. A third bid, a joint venture of Rancho Cucamonga, Calif.-based U.S. Aerospace, Inc., and Russian aerospace company Antonov, was rejected by the U.S. Air Force over the timing of its bid submission. The JV challenged the elimination, but the U.S. Government Accountability Office denied the challenge in an early October ruling.

"While we are disappointed with the outcome, we are pleased that the GAO determined that there is no evidence of any bias against working with international partners in bidding for U.S. military projects," said U.S. Aerospace Director Michael Goldberg in an October 6 company press release. "This bid was only the first step in effectuating our ongoing long-term business strategy. Merely submitting our joint bid and participating in the process has created a sea change in how the global aerospace industry views globalization and working together with leading aircraft manufacturers around the world. We look forward to continuing to bid on major U.S. military projects, and to supplying cost effective, high quality aircraft alternatives for commercial airlines and freight companies seeking to purchase, replace or upgrade their fleets."

Whichever aerospace giant wins the contract, numerous locations will benefit. Airbus parent European Aeronautic Defense & Space (EADS) plans to build an assembly plant in Mobile, Ala., if it wins the tanker contract. Workers at the facility would also produce the freighter version of the A330 airliner, adding to its aircraft-order potential. The A330-200F entered service in early 2010.

Should the KC-X Tanker Modernization Project be awarded to Boeing, more locations than just the Everett, Wash., 767 assembly plant will benefit. Boeing in recent weeks has issued several statements detailing the economic benefits in the U.S. of Boeing winning the contract. Nationwide, says Boeing, the NewGen Tanker program will support approximately 50,000 total U.S. jobs at the company and more than 800 suppliers in more than 40 states.

New Jersey, Boeing maintains, will benefit from an estimated 320 total jobs and generate an estimated US$17 million in annual economic impact. New Jersey manufacturers ready to produce components on the NewGen Tanker include Accurate Bushing, of Garwood, and Avionic Instruments, of Avenel. Currently, Boeing has 179 employees in New Jersey and works with nearly 471 suppliers/vendors, delivering a total $464 million in annual economic impact.

Boeing says Utah will benefit from an estimated 480 total jobs and generate an estimated $22 million in annual economic impact if the Boeing NewGen Tanker is selected as the next Air Force aerial refueling aircraft. Utah manufacturers slated to produce parts for the NewGen Tanker include Parker Hannifin in Ogden and Boeing in Salt Lake City. Currently, Boeing has 750 employees in Utah and works with nearly 253 suppliers/vendors, delivering a total $283 million in annual economic impact.

In August, Boeing announced plans to expand its St. Louis-area operations with a new manufacturing facility at MidAmerica Airport in Mascoutah, Ill. The facility, scheduled to open in late 2010 or early 2011, will use leased space in an existing building to house assembly and subassembly work. It is expected to initially bring approximately 75 new manufacturing jobs to Illinois.

"This facility’s proximity to BDS [Boeing Defense, Space & Security] headquarters, the presence of an established, skilled work force, and the infrastructure at MidAmerica Airport make it an ideal choice as Boeing looks for opportunities to expand our core business and ensure our St. Louis site remains competitive as we meet the high-value, low-cost needs of our customers," said Dennis Muilenburg, BDS president and CEO, at the expansion announcement.

Illinois is providing a $2.3-million business-investment package to the project, which will leverage Boeing’s $7-million investment. The state’s investment package will support Phase I of a potential three-phase project by Boeing to expand the Defense, Space and Security Group operations and create a Strategic Manufacturing Center at the airport. The center will serve as the lead facility for manufacturing complex sub-assemblies for Boeing products and will be the company’s first manufacturing facility in the state of Illinois, where Boeing moved its headquarters in 2001.

Meanwhile, other companies are investing in the aerospace sector in the U.S. and in other markets. Pioneer Aerospace, a designer and manufacturer of parachutes and auxiliary equipment, is expanding operations at its Columbia, Miss., facility, in Marion County. The company is investing $500,000 in new equipment and adding 50 new jobs as a result of the expansion. Pioneer is expanding to fulfill contracts to manufacture flare parachutes and is also increasing the number of people employed on its existing parachute line to build cargo parachutes. The company currently employs approximately 320 individuals.

GE Aviation announced in October an expansion of its work force in Durham, N.C., of 40 new hourly jobs in 2010 and additional hiring in 2011 to handle increasing work loads at its aircraft engine manufacturing and services facility. The company has also invested more than $8 million in plant improvements and equipment at the site.

"GE Aviation’s Durham location has grown from 275 employees last year to about 320 employees in 2010," said Doug McLean, plant manager of the GE Aviation Durham facility. "The expanded work force and the $8-million investment in the facility and equipment will enable us to manage the growing production volume of GE’s new fuel-efficient GEnx engine for the Boeing 787 and 747-8 aircraft," along with the increased production for GE90, CFM56 [built jointly with CFM International], GP7200 [built jointly with Snecma] and CF34 engine lines.

The Bristol Aerospace division of Magellan Aerospace plans to build a US$21.3-million, 140,000-sq.-ft (13,000-sq.-m.) advanced composite manufacturing facility in Winnipeg, Manitoba, in support of the Joint Strike Fighter (JSF) program. The launch customer for the new Center is BAE Systems in the United Kingdom, which awarded Magellan a contract to produce the JSF F-35 Lightning II horizontal tail components. Canada is a partner nation in the funding of the Joint Strike Fighter aircraft, which Lockheed Martin is building.

Back in the commercial aerospace arena, the British Embassy in Manila announced that British firm B/E Aerospace has chosen the Philippines as the site for the manufacture of galleys for the Airbus A350XWB, a new generation of wide-body aircraft, with an initial investment of $30 million. U.K. Ambassador to the Philippines Stephen Lillie said the Philippines beat 32 other countries in B/E’s initial list.

The project will create over 300 jobs. According to the Ambassador, B/E Aerospace, Inc. and its Leighton-Buzzard division, B/E Aerospace UK Ltd, the facility will accommodate a multi-billion-dollar contract for the manufacture of the galleys. Completed galley units will be shipped to Marseilles, France, and then on to Toulouse, France, where the aircraft will be assembled. 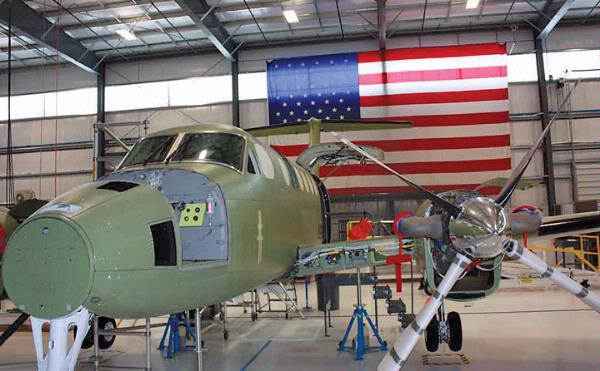 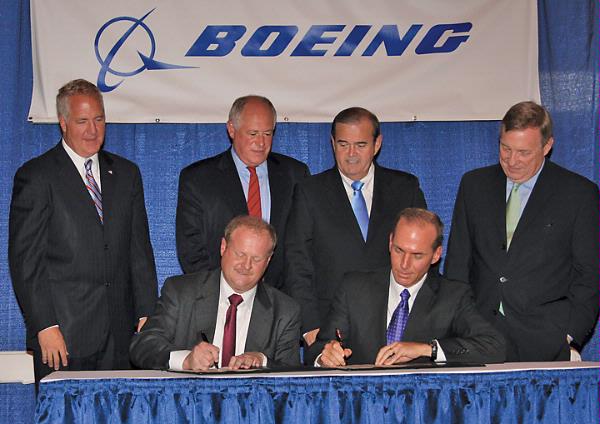 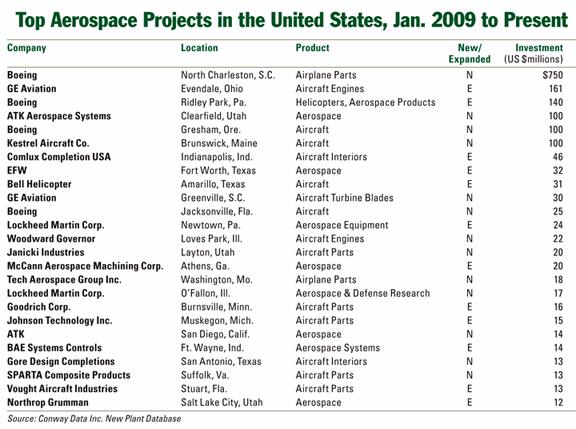 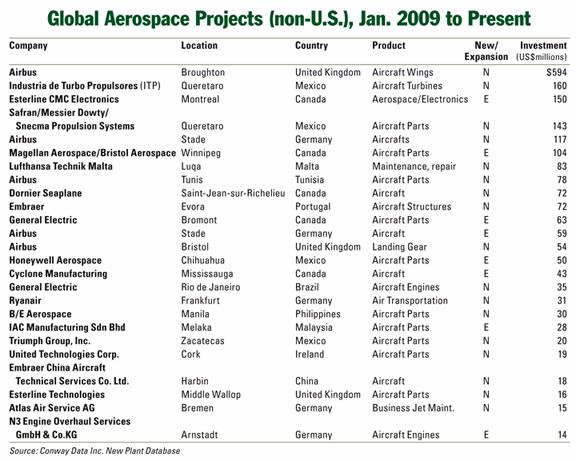