FDI IN THE USA 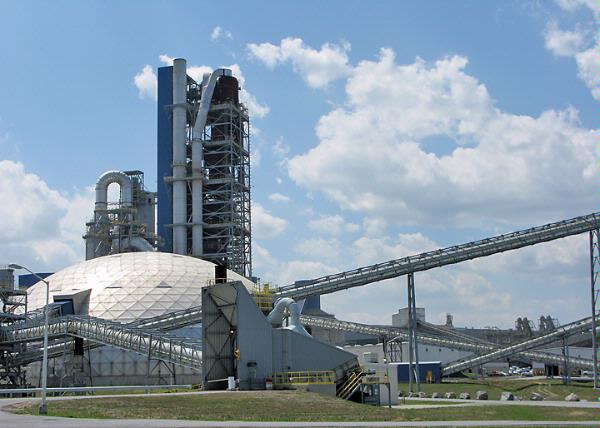 Cement specialist Essroc, part of the Italian Italcementi Group, has invested $500 million in its Martinsburg, W.Va., plant over the past few years.
Photo courtesy of Essroc

Some states keep a close watch.
Others, not so much.

by JOHN W, McCURRY
A 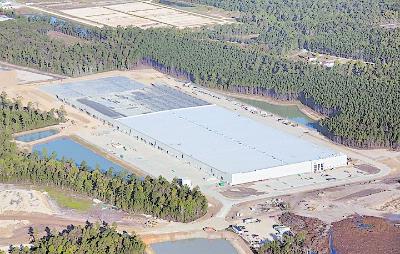 TBC, one of the largest marketers of automobile replacement tires and a subsidiary of Japan-based Sumitomo Corp., is nearing completion of a massive distribution center near Charleston, S.C.
Photo courtesy of the Rockefeller Group-MeadWestvaco Foreign Trade Zone/Charleston

ustralian firm Unilife Medical Solutions is nearing completion of its US$26-million global headquarters and manufacturing facility in York, Pa. The maker of pre-filled retractable syringes expects to begin production in early 2011 at its new 165,000-sq.-ft. (15,328-sq.-m.) plant. The project, which is being developed by the Keystone Redevelopment Group, will create 241 jobs and retain 87 employees moving from the company’s Lewisberry facility.

"Our new global headquarters and production facility that is now being developed in York, Pennsylvania, will give us the required flexibility to rapidly expand our business as we move towards a NASDAQ listing, commercial production and the signing of supply agreements with current and future pharmaceutical customers," said Unilife CEO Alan Shortall when the project was announced.

The Unilife project was one of 20 FDI-supported projects in Pennsylvania in 2009. Total investment was $213.5 million with 502 jobs created. The state reports that projects in the life sciences sector had the biggest impact.

Pennsylvania was one of the states with robust FDI that responded to a recent Site Selection survey. In addition to life sciences, other sectors seeing strong FDI are energy, aerospace and automotives.

States vary widely in their tracking of FDI data. Some do an excellent job, while others do not compile statistics. In fact, one state offered the response "that information is not currently collected" to three FDI-related questions. Other states rely on the Bureau of Economic Analysis statistics which lag by two to three years. But it is possible to piece together at least a sketch of FDI trends from some of the statistics and highlights received from states responding to the survey.

South Carolina has historically been adept at attracting FDI. That continued to be the case in 2009 with investments totaling $447 million with 2,299 jobs created. State officials cite the TBC Corp. distribution center project in Berkeley County as the 2009 project having the greatest economic impact. TBC, one of the largest marketers of automobile replacement tires and a subsidiary of Japan-based Sumitomo Corp., chose a site 25 miles (40 km.) from the Port of Charleston for a 1.1-million-sq.-ft. (102,190-sq.-m.), $52-million distribution center, with plans to create 120 jobs. TBC cited access to the deepwater port as a key factor in its decision.

Ohio recorded 37 FDI projects during 2009 which created 1,566 jobs and investment valued at more than $981.8 million. The largest project was the $650-million V&M Star steel plant in Youngstown, built by a subsidiary of French firm Vallourec and Mannesmann (see the Ohio Spotlight in the May 2010 issue at SiteSelection.com for a complete project profile). Ohio also secured six investments from Germany, five each from Canada and Japan and four from Switzerland.

Defense and Energy Lead the Way

In Mississippi, the $30-million expansion by Stark Aerospace was the largest FDI project in 2009. The company, a subsidiary of Israeli Aerospace Industries Ltd., opened a new 86,000-sq.-ft. (7,989-sq.-m.) facility at the Golden Triangle Regional Airport in Columbus. The expansion allows the company, which makes unmanned aerial vehicles, to house its corporate offices and manufacturing operations under one roof, and created 100 new jobs. The facility welcomed a visit in early October from Uzi Landau, Israel’s infrastructure minister. Mississippi is working to expand its business relationships with Israel and its companies.

Virginia reported 38 FDI projects in 2009 with the largest investments coming from Germany, Japan, Canada, the U.K. and Italy. One of the larger projects in terms of capital investment and jobs created is the Cobham Composite Products facility which opened in Suffolk in May. Cobham is a division of Cobham Defence Systems of the U.K. The company expects to create nearly 200 jobs within five years.

"The most significant factors that sold us on Suffolk included its outstanding quality of living, close proximity to excellent academic institutions with complementary curricula to our industry, and most importantly a high-technology skilled and disciplined work force available through the over 18,000 retiring military personnel annually," said Jeremy Wensinger, president, Cobham Defense Systems division.

Kansas reported four FDI projects in 2009 with a total of $348.5 million in capital investment and 1,194 jobs created. The primary project was the $50-million Siemens Energy wind turbine plant in Hutchinson which is expected to create 400 jobs.

Colorado’s FDI was also dominated by the wind energy sector in 2009. The state reports 12 projects with a value of $1.2 billion and the creation of 2,000 jobs. Colorado also lists the extensive investments by wind equipment manufacturer Vestas, which have exceeded $1 billion in the state since 2007.

In Alabama, where 48 projects worth $2.2 billion and 8,412 jobs were logged in 2009, automotives led the way. The $290-million Mercedes-Benz expansion, which is creating 1,000 jobs, is cited by state officials as the leading FDI project.

Louisiana reports that it does not track FDI data comprehensively, but the state had four major projects in 2009. A $350-million investment by SNF Flopam in a polymer manufacturing plant in Iberville Parish was the largest. A subsidiary of the French company SNF Floerger, the water-soluble polymer manufacturing facility will employ more than 500 with an average annual salary of $57,400.

"This facility is the largest single greenfield investment in the history of our company," said SNF Holding Co. president Peter Nichols. "We’ve reached this significant point in our project with the tremendous support from the state of Louisiana and so many individuals in Iberville Parish. We look forward to executing our construction plans over the next few years and having a lasting impact on the parish and state."

West Virginia reported six projects during 2009 with an investment of more than $146 million. The state cites the Essroc cement project investment in Martinsburg, which has totaled $500 million over the past four years, as the largest project. Essroc is part of the Italian Italcementi Group.

Oklahoma reported three FDI projects worth more than $408 million. Investing companies are from Australia, Japan and the U.K. The largest project is the ongoing investment by Australian firm Red Fork Energy, which is involved in shale gas exploration in three areas of the state.

Texas cites a Financial Times report that the state had 106 projects in 2009. The biggest investment, according to the state’s response to the Site Selection survey, is an investment of $700 million by Royal Dutch Shell. 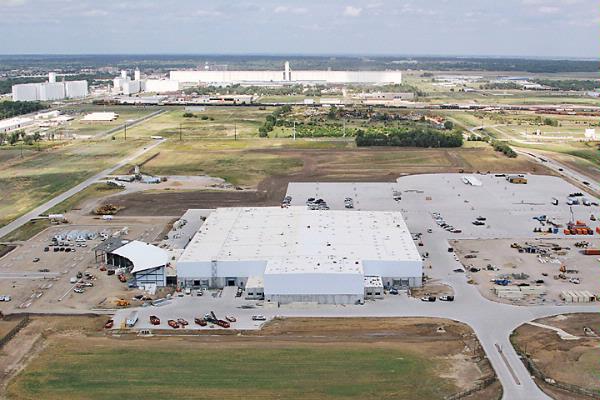 This late September aerial photo shows the construction progress of the Siemens facility in Hutchinson, Kan.
Photo courtesy of the Hutchinson/Reno County Chamber of Commerce