Will the World Cup and Summer Olympics in a few years give Brazil
a leg up on the competition for tourism investment capital?

nvestment promotion officials in are hoping global sporting events, mounting middle class spending power and a favorable political and economic climate will help the country realize more of its enormous potential in the travel & tourism sector. Brazil's allure to visitors as a vacation destination is easily apparent — especially with respect to the Northeast coast, where the climate is sunny and tropical year-round and the sand dunes and beaches of Rio Grande do Norte, for example, beckon. Investors, however, are a tougher sell.

The Northeast is the focus of a push from 's ADIT — the Association for Real Estate and Tourism Development — to lure investors and vacationers from Europe and the primarily. (In May, ADIT broadened its scope from a northeast regional agency to a national one during the annual Nordeste Invest conference organized by ADIT.)

will host the World Cup in 2014 and the Summer Olympics in in 2016, giving lodging investors the surety of fully booked properties during those events. But their real impact may have more to do with raising the profile of the tenth-largest economy in the world as a leisure destination before, during and after those events, hopefully prompting and other travelers to bring their spending money to .

Twelve Brazilian cities will host the World Cup, including the northeastern metros of , , and — the latter being the location of Nordeste Invest. For many travelers, this region affords relative proximity by plane, when they can avoid having to transit through or , three hours by air to the south. is building a new airport that will include significant cargo and logistics assets and increase annual passenger capacity fourfold when complete. But even direct flights to the region won't change the requirement for visitors to obtain a visa from an embassy or consulate, which, coupled with the distance from most cities, presents a barrier to tourism from the States.

Hotel investors are bullish on in general, with several major chains indicating in August, at ADIT's VII International Real Estate and Tourism Investment Meeting in Florianópolis, their intent to expand their footprint.

" has become the apple of Starwood's eye," said Viviene Boverio, director of investment acquisition for Starwood Hotels. "We have noticed a series of investment opportunities in . Our purpose now is to expand and be present in the country's main capitals. We are also looking for land owners to develop partnerships, by developing projects, structuring projects and attracting investors."

Julio Gavinho, director of development for Hyatt, added this: " has a great economic potential and a market ready for hotel brands." With the country's good momentum, and through studies that indicated a lack of hotel brands in , he says, "we from Hyatt are interested in building 50 hotels in in the next 10 years."

Paula Muniz, Hilton's director of development for , said that the hotel group was focused on acting in regions that have not yet been touched. This may include , which has several resort hotel properties along the Atlantic coast but no hotel properties yet that would be known to, and perhaps preferred by, business travelers to the area.

"We will bring four different Hilton brand names to , everything from low-budget hotels to luxury," Muniz stated. "In , there is a great potential for hotels, and that's why we are expanding our brand in the country."

Indeed, by some estimates, there are only about 100,000 hotel rooms in all of — there are more than that in each of the , , and markets. Still, remains a story of two leisure investment markets — the big cities where demand for rooms is constant and growing, and the still-developing resort markets of and other locations that are virtually unknown.

The latter will remain a tough Brazil nut to crack, especially with the Brazilian real as strong as it is in late 2010 (making bargains hard to find at resort cities on the coast) and the irksome visa issue, where U.S. visitors are concerned. What's more, Brazilians often find it more cost effective to travel to and other destinations than to stay at the resorts in . And high interest rates and lack of a double-taxation treaty with the make the business case for investing in harder to make.

"The visa issue has a direct impact on U.S.-branded hotels," says hotel investor Hans J. Hahne, partner, international investments, at EuroVest Partners, LLC, , "We have shifted away from resort developments in . We now focus all of our time and energy on urban hotels in the limited service area."

Hahne points to a lack of transparency where obtaining financial data on properties is concerned as a drawback to investing in Brazilian hotels. As for resorts, "The double-taxation issue triggers a different investment strategy, meaning as an investor, you only want to be a developer," he says. "The day you open your doors to hotel guests, you should be exiting your project. You exit the project and enjoy your development profit, if there is one, and that profit is taxed at the 15-percent tax rate, as opposed to ordinary income, which is taxed in the high 30s-percent range."

Hahne says he is currently more intrigued by Colombian properties, where a 30-year corporate income tax exemption is in place, and by . "I am very bullish on . There is no visa requirement for Americans, the infrastructure is excellent, and they need more hotels. I see a big future for the leisure sector there."

Even with its drawbacks, Brazil remains Hahne's number one Latin American investment market given its size — its population at about 200 million is the fifth largest in the world — and development potential. "That is very quickly followed by and . And let's not forget ," he adds, "which for all its bad press has outstanding GDP growth and excellent tourism infrastructure."

Only , though, will have the rapt attention of the world twice in the next several years and new infrastructure associated with hosting the World Cup and the Olympics. 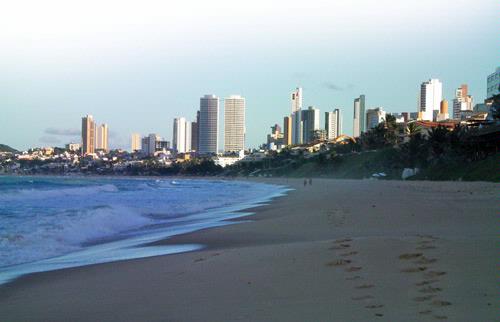 Natal, in Rio Grande do Norte on Brazil’s northeast coast, is one of 12 cities hosting World Cup matches in 2014.