Helped by the Ameren Illinois Utilities Act On Energy Program, Donnewald Distributing will see up-front incentives and a faster payback on the energy-efficiency investments it’s made at a new $10.5-million distribution center in Greenville, Ill.
by ADAM BRUNS
“W

e're part of the infrastructure. We're the people behind the power."

So says Mike Kearney, manager of economic development for Ameren Corp., in describing St. Louis-based Ameren's two-state footprint in Missouri and Illinois, and how his team works behind the scenes to make job creation connections that transcend political boundaries.

Those links begin with logistical infrastructure that encompasses the Mississippi River, rail, airport-related projects and a robust highway network. The common links also include values endemic to the Midwest: a strong work ethic, and an equally strong case to be made when it comes to overall costs. The value proposition goes beyond reasonable rates for salaries and real estate: For the 12 months ending Dec. 31, 2009, Ameren Missouri's industrial rates were approximately 35 percent below the national average.

"We share so much in this region," says Kearney. "When you look at the economic diversity of the two-state area, there are unique opportunities, and it really depends on what the company's needs are."

With $24 billion in assets, Ameren is among the nation's largest investor-owned electric or gas utilities. It serves 2.4 million electric and nearly one million natural gas customers throughout its 64,000-square-mile territory, which boasts approximately 6 million residents. Ameren's economic development efforts are helping to increase that customer tally one by one.

Among the companies whose needs Ameren helped fulfill in 2009 were Fiserv and MiTek Industries in Missouri, and Johnson Controls, Arch Coal, Kraft and Midwest Nonwovens in Illinois. All told, Ameren's team, in conjunction with community partners, helped attract more than $1.1 billion in investment and some 2,291 new jobs to the region it calls home.

Energy efficiency is assuming an increasingly higher profile among Ameren's business clientele. Among the projects unifying the region is one that's helping Donnewald Distributing Co. concentrate its assets. The Anheuser-Busch distributor is investing $10.5 million in a new 166,000-sq.-ft. facility in Greenville, Ill., that will employ 80 people. The project near I-70 in south-central Illinois consolidates the company's footprint from four area facilities to one, located in the center of company territory.

The Ameren Illinois Utilities Act On Energy Program worked with the project's contractors to provide incentive funds to support energy-efficiency objectives at the new complex. (Ameren Missouri's Business Energy Efficiency Program is similar.) Measures include motion-sensitive lighting, high insulation value and, most important, a $1.5-million geothermal HVAC/refrigeration system using a new five-acre lake next to the tilt-up concrete building. It's the first Anheuser-Busch distribution center in the nation to use geothermal energy for its cooling system.

The project will achieve approximately 750,000 kWh of annual energy savings and will receive an incentive check of approximately $50,000. Act On Energy incentives will reduce the payback period for Donnewald's project by approximately one year and will defray roughly 15 percent of the project cost.

The incentives and accelerated depreciation on federal taxes "really helped make our mind up to go the geothermal route," says Mike Donnewald, president of Donnewald Distributing Co. But first his team had to get the go-ahead from experts that geothermal would work on a scale this big, helping keep 70,000 sq. ft. of stored beverages cool.

The facility opened for business in June 2010, just as one of the hottest summers on record was just getting up a head of steam. In August, as Donnewald speaks, it's 100 degrees outside, but "walk into our warehouse right now and it's a nice cool 68 degrees," he says. "You almost need a coat to go in there. There is no natural gas coming into this building at all. I'm amazed at how well it's working."

It's sweet reward indeed, as Donnewald and his team fought to make the numbers work, even though traditional HVAC equipment would have been nearly three times less expensive. But Donnewald counts himself in the green camp: "I feel like we use way too much of the world's energy," he says. "I wanted a nice new building, a place our employees could be proud to work in, but I also wanted to be as energy-efficient as possible. We found the right mix here."

In exchange for the extra investment, in addition to the cooling, Donnewald employees get a lake stocked with fish to grace their property.

"It's amazing how it's worked out," says Donnewald as a couple dozen Canadian geese stop over outside his window. "If we can do all of this and still save the amount of energy Ameren projects, it's really going to be a win-win for everybody."

"We think energy efficiency is part of taking care of the customer," says Kearney.

Or, as Donnewald puts it on behalf of his own customers, "Fresh beer tastes better."

The tools include a just-completed two-state logistics study and a revamped quality of labor survey. Again, says Kearney, building collaboration around shared regional economic assets is the key to success. He points to the China hub logistics effort being promoted by the St. Louis Regional Chamber and Growth Association. The project is centered around making property at Lambert-St.Louis International Airport a hub for Chinese company cargo needs.

"That's not just an opportunity for one location, but it's multi-state in terms of creative synergies throughout the region," Kearney says. "We're central to a lot of markets. In fact, in our logistics study, we identified a market of 78 million people with above average incomes within an eight-hour drive from St. Louis."

The logistics study also helps educate community leaders about how to position themselves in terms of companies' space and training needs. A key to success is reinforcing to those communities the importance of a) updating data on their inventories of existing buildings and b) keeping up with the needs and wants of their existing businesses.

The refashioned quality of labor survey makes better use of electronic databases. "As a prospect looks regionally, beyond a certain locality, we're able to aggregate that data and create different mixes and matches of geography," Kearney explains. "As much as we would like to think that successful economic development rises and falls with electric utilities, it doesn't. Labor quality, work force and innovation are at the forefront."

The surveys also provide some insight into the business community's satisfaction with Ameren territory: The average number of years at the present location for 43 company respondents to a survey in mid-Missouri was 44 years.

Like the farms that populate both sides of the Mississippi River basin, projects large and small are part of the fabric that makes this heartland region thrive. Similarly, Ameren counts itself part of a regional family of partners at the state, regional and local levels, all of whom seek to cultivate prosperity.

"This is a team sport," says Kearney. "Beyond delivering safe and reliable energy to our customers, supporting long-term sustainable development for our area is a commitment to community stewardship." 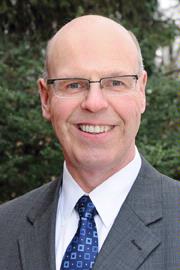 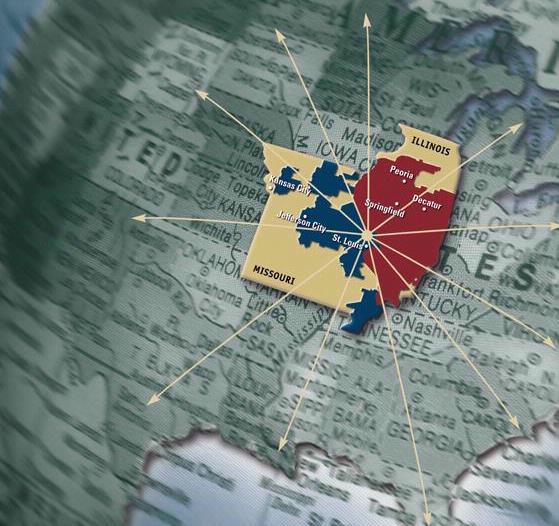