For Your Own Protection? In November 2009, Tata Consulting Services hired its 300th employee at this $20-million facility it located near Cincinnati in 2007. The company intends to hire up to 1,000.
F

or Indian business process outsourcing firms such as Tata, Wipro and Infosys, something not so funny happened on the way to the August recess of the U.S. Senate. A $600-million border-security bill that passed included a new provision calling for companies with 50 or more employees whose U.S. payrolls were at least half composed of foreign workers with H1-B or L-1 visas to pay exorbitant new fees per each foreign worker. The fees would pay for a primary portion of the overall bill's border-security programs.

"While the full details of implementation are not available, we estimate the impact on Indian firms could be as high as US$200-250 million per year," said a statement from Indian technology company association NASSCOM, which added that Indian companies take under 12 percent of all H1-B visas, and that U.S. firms who also use the visas but come in just under that 50-percent line would not be affected by the new measure. A NASSCOM spokesman told The Wall Street Journal that between 70 percent and 80 percent of typical member firms' U.S. work forces were composed of workers on temporary visas. The fees are estimated to be approximately $4,000 for renewals and $4,500 for new visas (up from $2,500).

"We believe this will have negative impact on Indian companies which are investing in the U.S., employing U.S. talent, driving U.S. technological talent and are overall aiding the U.S. economic recovery," NASSCOM continued. "In addition to this, in absence of a totalization agreement, Indian firms and Indian citizens pay in excess of $1 Billion to the U.S. in [the] form of Social Security, with no benefit or refund. This bill is indirect protectionism and contrary to the Obama administration's repeated pleas to the international community to avoid taking such actions. The adoption of these provisions by the U.S. hinders the free movement of people essential for promotion of free trade."

The association went on to say that the measure would lead to "diminished inflows of Indian talent." But would that necessarily mean hiring of more U.S. citizens?

A review of new facilities and expansions by Tata Consultancy Services, Wipro and Infosys tracked over the past decade by the Conway Data New Plant Database shows major investments in Mexico (Monterrey) as well as in the U.S. Infosys established an operation in Dallas in 2004, and Tata Consulting Services in 2007 announced a $20-million, 1,000-worker facility on the outskirts of Cincinnati. In November 2009, TCS said it had hired its 300th employee at that Miami Township campus in Clermont County, and that more than 225 associates had joined TCS from top universities throughout the United States over the previous several months. "The Cincinnati region is a great place for us to recruit and train local talent to meet the demands of our customers as they grow out of the downturn," said TCS North America President Surya Kant. "The strong partnerships we continue to have with the greater Cincinnati academic community, including the University of Cincinnati and Ohio State University, ensure that we will continue to find skilled professionals in this region."

A North American spokesman for Tata declined to comment for this story, or to provide any numbers regarding employment of U.S. citizens and visa holders. Queries to Infosys and Wipro also went unanswered. However, some light was shed on Tata's momentum in the States by its financial statement released in July: "In terms of markets, North America and Asia led the momentum for growth." Among the key delivery highlights was implementation of the first phase of a new property tax management system for "one of the largest districts in California, USA."

In the meantime, major BPO firms continue to service the North American business needs of their clients quite satisfactorily from abroad. Mahindra Satyam announced in May a five-year renewal for India-based design and artwork services for the global needs of pharmaceutical giant GSK. And in July, Mahindra Satyam announced a new Offshore Development Center for BASF IT Services at one of the Indian firm's offices in Chennai, India: "Currently, there are 150 associates operating out of this ODC with plans to ramp up to 500 associates by 2011 in order to extend services to BASF in North and South America and for the Asia Pacific region," said a company press release.

GM and VW Expand in Mexico The most recent expansion at GM’s plant in Ramos Arizpe was in 2008.
I

n early August General Motors announced it would invest $500 million to produce a new vehicle and eight-cylinder engines at its complex in Ramos Arizpe, Mexico. The project will create 390 new jobs. The company last expanded in Ramos Arizpe in 2008, when it invested $469 million and announced its intent to create 875 new jobs.

The announcement came one month after Volkswagen Group opened a new section at its Volkswagen de México plant in Puebla for assembly of the new Jetta. With help from this plant as well as the new plant coming online in Chattanooga, Tenn., VW still plans to sell 1 million vehicles per year in the U.S. by 2018. It also plans to invest some $1 billion in Mexico over the next three years, after having already spent approximately that amount since 2008.

"Efficient production with high localization and new products tailored to the wishes of our North American customers will bring further growth momentum in Mexico," said Dr. Jochem Heizmann, member of the Board of Management of Volkswagen AG with responsibility for Group Production. More than 70 percent of the parts in the new Jetta come from Mexican suppliers. Heitzmann also said VW is on the brink of announcing the location of a new engine plant to serve both Puebla and Chattanooga.

"Mexico is one possible option," said the VW release.

hen a corporation consolidates, some locations lose and, generally, one wins. That winner in July was Bowling Green, Ky., where state and company officials gathered to celebrate the near completion of Fruit of the Loom Inc.'s $47-million world headquarters expansion, which will create 600 new jobs by the time it's complete in early 2011.

The expansion includes the relocation of all sales, marketing and management support operations for its subsidiaries of Russell Brands LLC and Vanity Fair Brands LP from Atlanta and Alpharetta, Ga., and Alexander City, Ala.

"We are proud to have been a part of the Bowling Green community for over 70 years," said John Holland, president and CEO of Fruit of the Loom Inc. "Consolidating the key management group for these brands with our Fruit of the Loom and BVD management team will strengthen our ability to correlate growth strategies within different distribution channels, utilizing the variety of brands and products available from these recent acquisitions in our U.S. and international markets. We are also fortunate to have many of our people within these operations make the decision to relocate their families to Bowling Green."

The celebration was followed a few weeks later by the August announcement that SCA would invest $50 million and create 65 new jobs at its North American Personal Care manufacturing operation in Bowling Green, which currently employs 180. The division makes adult incontinence products. The expansion adds 89,000 sq. ft. (8,268 sq. m.) to the 459,000-sq.-ft. (42,641-sq.-m.) site.

"Part of the project will allow SCA to begin manufacturing products in Bowling Green that we have been importing from Europe," said Sune Lundin, president of SCA Americas. That move means the continuance of SCA's manufacturing partnership with Japanese company Unicharm, with which it had worked in Europe.

"We are very pleased and excited to partner with SCA to bring our first United States manufacturing project to Bowling Green," said Takahisa Takahara, president and CEO of Unicharm.

Look In the Mirror 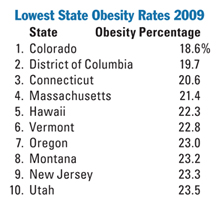 Work force health may be the least-discussed site selection factor of all, for legal reasons as much as lack of awareness. And it's generally understood that health issues can increase as a person's body weight does the same. In early August, the Centers for Disease Control released their latest snapshot of state-specific obesity prevalence among adults in the United States. The U.S. Surgeon General issued the "Call to Action to Prevent and Decrease Overweight and Obesity" in 2001. By 2007, no state had met the "Healthy People 2010" objective to reduce obesity prevalence among adults to 15 percent. How did the states look in the mirror in 2009?

"Overall self-reported obesity prevalence in the United States was 26.7 percent," said the CDC, an increase of 1.1 percent from 2007. Still, no state met the obesity target of 15 percent: Colorado and the District of Columbia were the only jurisdictions with prevalences below 20 percent, part of a general trend. In 2000, 28 states were below that threshold; in 2005, it was down to four, and in 2007, only one.

The rest fall somewhere in the middle. Anchors Don’t Weigh Down These Towns

July report from Atlanta-based Garner Economics on job growth figures released by the federal government in May showed that 95 of the nation's 392 metro areas were experiencing year-over-year total job growth, up from 68 metros in April and 51 in March. Among industrial sectors, the largest percentage increase from December 2009 to May was manufacturing, with 39 metros adding employment in Mayversus just four in December 2009. "Contrary to the belief of some, manufacturing employment is not dead," wrote Tom Tveidt, Garner's research economist.

While May's 95 growing metros were mostly confined to the eastern half of the nation, the 19 metros that Garner said experienced uninterrupted employment growth from January through May were a bit more evenly dispersed.

"The 19 don't share a single industry strength or characteristic, but most owe their performance to a reliance on the handful of sectors that have weathered the recession well (namely Government/Military, Health Services, and Private Education)," wrote Tveidt. However, we noticed one characteristic among many of them: the presence of major institutions, be they of government, higher learning, tourism or the corporate variety. Below are those nifty 19, listed alongside their most well-known anchors. SITE SELECTORS - IT’S TIME FOR MIDWEST COMMUNITIES TO CHANGE: If the Midwest needed a wake-up call, it was delivered in a big way on Nov. 26 when General Motors announced that it would schedule five automotive plants for closure. (Dec 19, 2018)