Technological evolution is behind a
new generation of giant, renewable
energy plants that leave yesterday’s
projects in the dust.Increasingly,
they are major job generators, too. 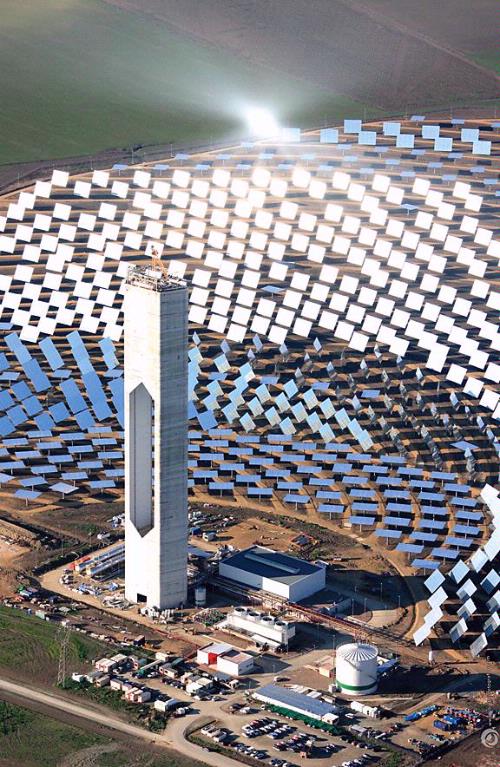 These are just two recent examples of renewable energy superlatives that today are more commonplace as global energy demand increases and fossil-fuel solutions lose currency. The regions where these superlatives are built and installed already are huge jobs generators.

When finished, the ambitious Alta Wind Energy Center being built by Terra-Gen Power LLC in Kern County will have the capacity to generate 1,550 MW of power, nearly double the capacity of Roscoe Wind Complex in Texas, which currently has the distinction of being the world's largest wind farm.

The project is going up in the Tehachapi Pass, about 75 miles (121 km.) north of Los Angeles. The project will supply power to 1.1 million people, or the equivalent of 275,000 homes. Terra-Gen Power says AWEC will create more than 3,000 U.S. manufacturing, construction, operation and maintenance jobs.

Vestas will supply 190 wind turbines, the company's largest order for a single site in 31 years. All blades for the Alta project will be produced at Vestas' blades factory in Windsor, Colo. And a majority of the towers will be manufactured at Vestas' new tower factory in Pueblo, Colo. The first 50 turbines will be commissioned by the end of 2010 and the remainder will be online in the first half of 2011, according to Vestas. This order marks Vestas' eighth North American deal announced in 2010, totaling 1,336 MW this year among four turbine types.

In the Arizona desert, the largest concentrating solar plant in the world, Solana, will soon be taking shape. To be developed by Spanish firm Abengoa Solar, Solana will be installed about 70 miles (113 km.) southwest of Phoenix, near Gila Bend. Solana, with 250 MW of power output capacity, is based on parabolic trough technology and thermal storage using molten salts. When operation starts up, the plant will have the capacity to supply clean power to 70,000 homes and will eliminate around 475,000 tons of CO2.

Solana will include six hours of molten salt thermal energy storage capability, which will allow energy to be dispatched as needed during cloudy periods and after sunset. With this capability, Solana will be able to generate electricity well into the evening to help meet summer peak demand. Solana will produce enough energy to serve 70,000 households.

The White House recently announced that the U.S. Department of Energy has offered a conditional commitment for a US$1.45-billion loan guarantee to Abengoa Solar, Inc. The loan will support the construction and start-up of Solana. Abengoa Solar has made it a priority to utilize U.S.-made components wherever possible for the Solana plant. More than 75 percent of the equipment and supplies required to build Solana will be manufactured in the U.S. These include steam generators, heat exchangers, power equipment, glass, steel, concrete and other construction materials.

Rioglass Solar, a Spanish manufacturer of glass for commercial solar plants, announced in early August that it would build a $50-million U.S. headquarters and manufacturing facility in the Phoenix suburb of Surprise to supply the Solana project.

Abengoa, based in Seville, deploys both concentrating solar power (CSP) and PV technologies at its power plants. Its primary installations are in Spain, but it also has smaller installations in California, Colorado and Texas in the U.S., and in Italy. It also has projects planned in Abu Dhabi and Algeria.

"Going forward, the two technologies will both play a role because they are suitable for different geographies and they are complementary in terms of megawatts," says Florian Klein, Abengoa's director of strategy. "Photovoltaic is useful in single-digit-megawatt projects. CSP comes into play in 25 to 30 and up. We don't see a conflict between the two necessarily."

Klein says CSP will be much more prominent in Abengoa's future.

"CSP offers an advantage in the fact that we can store thermal energy either by vapor or molten salts or other technologies in the pipeline," he says.

Abengoa's first projects were built near Seville, including the world's first two CSP towers, which were built between 2007 and 2009.

"It was a logical choice for a company based in the south of Spain to have the first development built close by," Klein says. "We had good access to land and some subsidy advantages to produce in that region. It's not only a commercial plant, we have other facilities such as testing sites for prototypes. In total, it was the best solution for us."

"Solar radiation is the first order," Klein says. "Then, it should be close to electrical infrastructure with a connection point to the grid. There should be access to water, and the site should be relatively flat. There is some margin for that depending on the technology you use. Also important is the legal framework. We need to have a stable political environment and some sort of legal framework to get the project financed.

"We see ourselves as one of the technology leaders in the field and we want to maintain that position and expand going forward," says Klein. "If you look at the development in CSP you would have to say over last the 10 years that Spain has been the early adapter in the market. We expect the U.S. will play an increasing role in scaling up the technology and becoming by far the most important market in the coming years. We are getting ready to meet this demand and we will be there once this inflection point happens."

Citing supplier projects such as Rioglass Solar, Klein says it is an advantage to have a manufacturing operation nearby. Abengoa seeks local suppliers as much as possible.

"It is an industry where we still need public money to build plants," Klein says. "Politicians do care that a good part of the plant is supplied locally. We agree with this assessment."

Klein believes the cost of solar power will eventually decline to the point that government assistance in projects will no longer be needed.

"You can find a number of road maps that talk about the cost curve we will experience over the coming years. It is our firm expectation that the cost of plants and electricity they will produce will go down. No one can be sure about the time frame and how significant the reduction will be, but it is our expectation that in the future this industry can stand on its own feet."

A new solar company has emerged from a Pasadena, Calif., technology incubator to begin manufacturing operations of solar modules it describes as "next generation."

Energy Innovations, which was born in Pasadena's Idealab, has developed a solar module called Sunflower that uses lenses to concentrate the sun's energy onto ultra-high-efficiency solar cells similar to those used in satellites. By concentrating sunlight, Sunflower modules use 1/1,200th of the expensive photovoltaic material found in traditional solar panels. The company says Sunflower modules convert more than 29 percent of the sun's energy into electricity, nearly double the average 15-percent conversion efficiency found in traditional photovoltaic panels sold today.

Abundant sunshine brought Energy Innovations to Poway, a San Diego suburb, where it has moved into a 60,000-sq.-ft. (5,574-sq.-m.) headquarters and manufacturing facility. The company has already begun manufacturing and expects to have 100 employees within six months and 400 within four years.

"There are 263 days of clear sunshine in Poway and that's critical to the testing of our products," says Joe Budano, CEO of Energy Innovations. "San Diego has a pretty vibrant and growing cleantech cluster with something like 400 green energy or cleantech-related businesses, so we have access to engineering and manufacturing talent."

Budano says his company's principal market is in the southwestern U.S., so locating near San Diego helps minimize distribution costs.

"We also found an absolutely fantastic building that has expansion capability and a willing landlord that provided expansion rights and flexibility in our lease," Budano says. "Incentives did not drive our decision. California has nothing to offer us but good sunshine and the usual training programs. We also recently received a $3.5-million low-interest loan from the state targeting companies producing clean energy products."

Energy Innovation's customers will primarily be utility companies who will install the modules on roofs or in large solar farms.

Traditional wind turbines, with their tall towers and long blades, can generate a lot of power, but also require a lot of open space, making them unfit for densely populated regions. This has lead to a subcategory commonly referred to as urban turbines. Continental Europe was the first region to embrace these smaller turbines. Innovative new designs are leading to greater acceptance around the world, with the U.K. becoming the scene for some striking new installations.

London's new Strata SE1 tower, a 43-story residential building developed and built by Brookfield Europe, puts urban turbines in the middle of the city's skyline. Brookfield says the tower is the world's first development to integrate wind turbines into the construction of a building. Electricity generated from three turbines at the top of Strata is expected to contribute 8 percent of the skyscraper's total energy consumption.

Also in the U.K., a manufacturer of small wind turbines is installing them in all sorts of tight places. Quiet Revolution builds its wind turbines in South Wales. The company eschews the urban turbine description of its products, preferring to portray them as "wind turbines that work well in environments close to people and buildings." Clients include major retailers, developers, government departments, schools and universities.

Urban wind turbine installations are also springing up across the U.S., with products from companies such as Portland-based Oregon Wind, which designed and manufactures its products in Portland, and Urban Green Energy, a New York-headquartered firm that has a production facility near Beijing in China's Hebei Province. 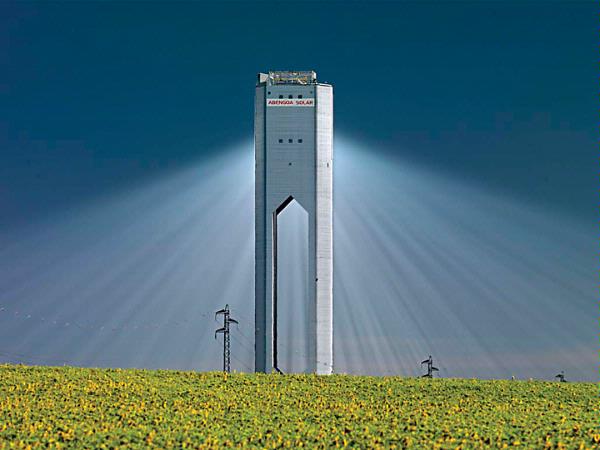 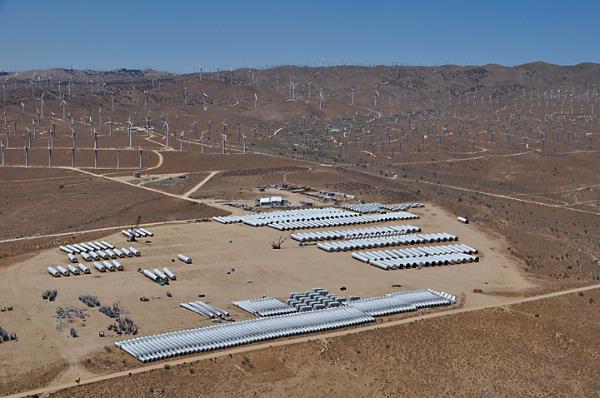 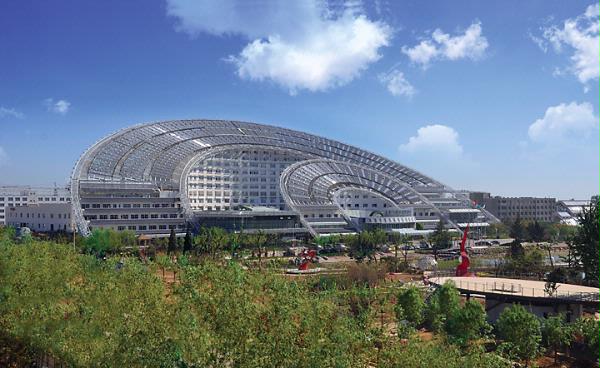 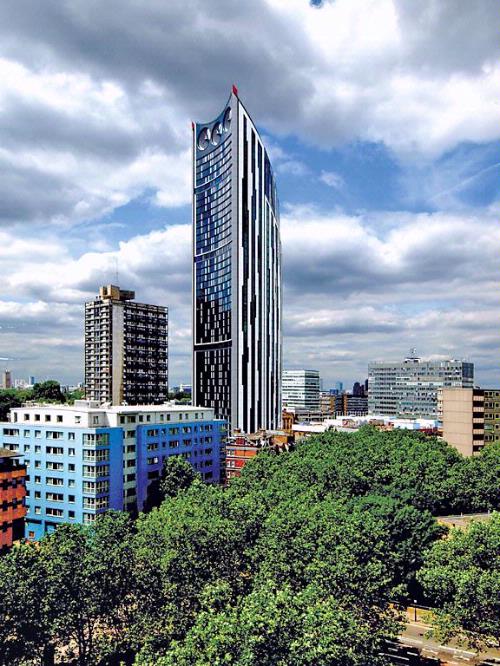 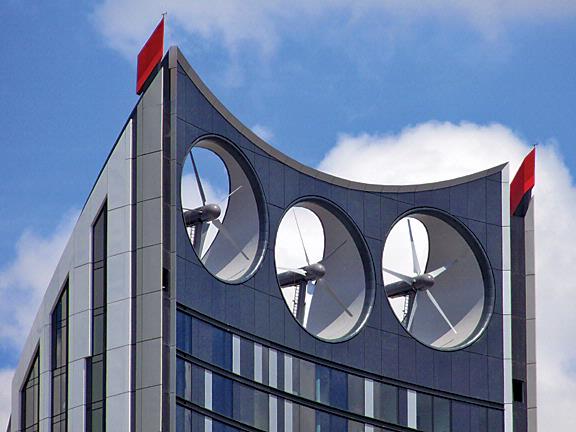