Composites loom large in the future of industry.

omposites are gaining increased use in a myriad of industrial sectors including automotives, aeronautics and wind energy. The trend is spurring new projects, new partnerships and new supply chains.

Long-time collaborators BMW and SGL Group, a carbon fiber specialist, have teamed for a joint venture known as SGL Automotive Carbon Fibers, which will produce carbon fiber to be used in composite parts for BMW’s new Megacity vehicle. BMW’s quest for a "green" supply chain for the new electric vehicle took the German firms on an intercontinental search to ensure that the carbon fiber required for the urban commuter vehicle’s composite structure is manufactured in a sustainable way. As reported in the May issue of Site Selection, that search ultimately led the joint venture to Moses Lake, Wash.

Site Selection recently spoke with the joint venture’s co-managing directors — Andreas Wüllner of SGL Carbon and Jörg Pohlman of BMW — about the project.

"Our team wanted to build not only a new car but a new way forward in developing vehicles," Pohlman says. "We are re-doing the business model, and one of the very early things we established for the Megacity vehicle is that it would have to be a green vehicle, and along the entire value chain we would look at establishing sustainability symbols. The whole project will be sustainable from development to manufacturing to selling the vehicles."

Reducing the amount of energy required to operate the vehicle dictated lighter materials, so the effort turned to carbon fiber. Also, producing carbon fiber requires a lot of electrical energy, so Wüllner says it was essential to reduce electrical costs.

"When you look at what you need to do to produce carbon fibers, the largest cost is energy and then capital expenditures," SGL’s Wüllner says. "The cost of energy can be influenced. You need a reliable electrical energy source because you cannot cope with energy interruptions. Even milliseconds of power outages can influence your process. In this case, with BMW, it was crucial to have a sustainable production process, which means being energy-efficient on the one hand, but on the other hand, the carbon footprint has to be as minimal as possible."

The joint venture hired the McCallum Sweeney consultancy to conduct its site search, which looked at dozens of locations during its initial phase, Pohlman says. The key factor in the search was finding a steady source of renewable energy to power the new plant.

"We had a map with many dots on it and we were very open in where we were considering," Pohlman says. "We didn’t focus only on North America — we thought maybe Scandinavia. It became clear that we would need hydropower, because it couldn’t be wind and it couldn’t be solar because we needed a reliable source without interruption."

Costs in Scandinavia proved to be too high, so the search soon focused on the northwestern U.S. and southeastern Canada. Additional considerations included land availability, permitting processes, availability of skilled labor and the potential for natural catastrophes such as earthquakes.

"Obviously, if production of this material got cut off, the entire vehicle could not be manufactured," Pohlman says. "This plant will really be the single source of this material for this vehicle."

The 60-acre (24.3-hectare) site has room for expansion and is potentially sufficient for 10 manufacturing lines should business conditions warrant. The timetable for expansion beyond the first phase is open.

"The land we have has room for expansion and clearly we need that," Pohlman says. "We assume in the future the material will be used not only by BMW, but by all vehicles. If you want to meet emission standards in the future without compromising the functionality of vehicles, you have to find ways to make cars lighter. Carbon fiber is obviously a good solution."

Wüllner too believes composites will become a major component of automobiles going forward:

"In the long run, I am convinced that carbon fibers, or carbon-fiber-reinforced plastic, will become the third material group to be used as a standard material along with steel and aluminum. It won’t be a total replacement, but it will be a good combination along with some form of aluminum. Composites save weight. However, other auto companies have to learn to cope with this material. BMW started more than 10 years ago and learned to product the parts internally. This will happen for sure with other companies. You do not need aerospace-grade fibers in vehicles. If you do it smart enough, you can do it with industry-grade materials, which can lead to cost reduction."

Wind energy is another growth engine for composites, Wüllner says.

"In the wind industry, rotor blades are where you can potentially use a lot of fibers," Wüllner says. "Rotor blades are getting long and longer, and as the number of offshore wind parks increases, you will find more carbon fibers in those rotor blades."

During the initial phase of the project, the BMW/SGL joint venture will invest US$100 million and create 80 jobs as it develops two carbon fiber lines, each with an annual capacity of 1,500 metric tons. The first production building will be completed by the end of 2010, and the joint venture will install machinery in January with a plan to commission the first carbon fiber line during the second quarter of 2011. To put that into perspective, the entire global market for carbon fiber during 2009 was 30,000 metric tons, Wüllner says.

Another automotive company that is moving fast into composites is Italian firm Lamborghini, which recently announced a new Advanced Composites Research Center (ACRC) at its headquarters in Sant’Agata Bolognese. The center carries out research on design and production methods for carbon-fiber elements. The car builder has also developed a new production process for complex carbon-fiber structures.

"The consistent development of carbon-fiber technology is a key element of our strategy," said Stephan Winkelmann, president and CEO of Automobili Lamborghini. "The most important parameter for super sportscars is, now as in the future, the weight-to-power ratio. Therefore, as there is a limit to power increase due to emission regulations, we must work on weight reduction. Extensive use of carbon fiber, even at structural level, allows Lamborghini to be at the forefront of development techniques."

Kestrel Aircraft, which has ambitious plans for large-scale production of its composite-based turboprop aircraft, chose a site at the soon-to-be decommissioned Naval Air Station Brunswick (NASB) in Maine for its first manufacturing facility. Kestrel will lease a 170,000-sq.-ft. (15,800-sq.-m.) hangar that was built in 2004, a year before the base was pinpointed for closing in the 2005 round of BRAC. The base has already greatly curtailed operations and is due to officially close in May 2011. NASB is being re-developed under the Brunswick Landing brand by the Midcoast Regional Redevelopment Authority.

Kestrel Aircraft is the new name of Farnborough Aircraft Corp. of the U.K., which developed the plane. Kestrel will invest more than $100 million in the project and will eventually create more than 300 jobs after it ramps up to full production, a process that will take about two years.

Kestrel CEO and Chairman Alan Klapmeier says he grew up with a fondness for Maine, having visited the state during his childhood. So the journey that led to the selection of Brunswick was a combination of two factors: a subjective perspective on quality-of-life factors that Maine offers and a more objective look at the company’s needs.

Klapmeier says Kestrel needed just the right kind of airport facility that fit its needs with the necessary aviation infrastructure and available manufacturing buildings. The Brunswick selection came after a search that included looks at several aviation facilities, including other BRAC closures, in south-central and southeastern states, he says. An aviation veteran, Klapmeier founded Duluth, Minn.-based Cirrus Design in 1984 and served as its CEO for 25 years.

"You can take any airport, obviously if it has the right infrastructure," Klapmeier says. "That’s what we did when we moved Cirrus Design to Duluth. We looked at military facilities in the past and had been aware of the BRAC process. Some of the sites we looked at had older buildings that needed a lot of work."

Klapmeier says from his previous look at BRAC, he had kept in the back of his mind which other bases might be closing. Hearing several years ago that Brunswick would be closing, he decided to take a closer look.

"Brunswick puts all the advantages together," Klapmeier says. "It has a very nice building that will make an ideal manufacturing facility."

"What Maine has is this really broad background and focus on composites through the Maine Composite Alliance and what the engineering school [University of Maine AEWC Advanced Structures and Composites Center] offers. People are more aware of the terms and techniques."

Klapmeier says production on the new plane won’t begin for a couple of years, but he hopes to open an office at the site in the near future. He plans to produce 50 of the planes, which he estimates will sell for $2.5 million to $3 million apiece, during the first year of production. Kestrel plans to create 300 jobs, but that may be just a start, he says.

"Three hundred jobs is a target number along the way. I will be surprised if it isn’t a lot more than that. I’m optimistic about general aviation in the long run. It provides valuable transportation in a busy world. By saving time, it creates and enhances economic activity."

Beyond Boats and Wood

The University of Maine’s composites center in Orono was established by the National Science Foundation in 1996. It has worked with more than 300 clients around the globe in development, design and prototype testing of the full gamut of composite products.

"The lab is rather unique because of its ability to integrate all of these functions under one roof," says Dr. Habib J. Dagher, director of the center. "We also help with business attraction to the state."

When the lab first started, it concentrated on wood composites to take advantage of the state’s natural resources. Hence, the AEWC (Advanced Engineered Wood Composites) part of the center’s name. But the center has moved far beyond that and wood products development is just a small part of its work now. The lab is currently undergoing a major expansion.

"Maine has a growing composites industry," Dagher says. "It was born initially in the boat building industry. The industry came together about 15 years ago under the Maine Composite Alliance to work as a unified group in an industry cluster." 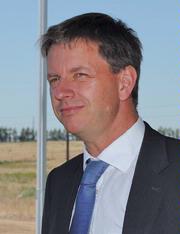 Jörg Pohlman (below) of BMW and Andreas Wüllner of SGL Carbon are co-managing directors of the new SGL Automotive Carbon Fibers joint venture. 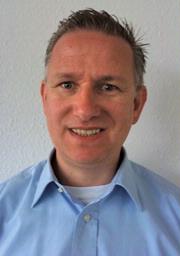 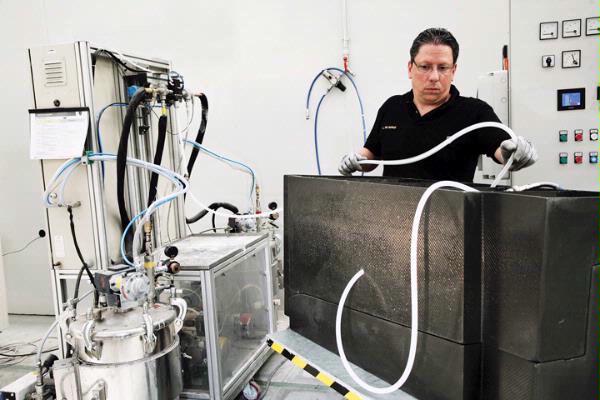 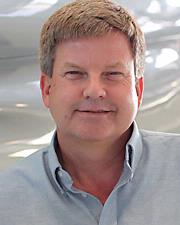 Use of Composites Will Accelerate 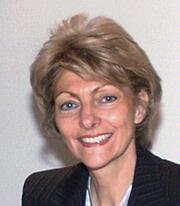 "In the U.S. up to 2015, two markets will see a high growth in composites use — aerospace (11 percent) and wind energy (7 percent)," stated Frederique Mutel, president and CEO of JEC Composites. "At a worldwide level, significant substitution by composites against traditional materials will occur in specific industries such as aeronautics because new aircraft types need a higher level of composites due to the importance of lightening issues for fuel efficiency, transportation (higher fuel efficiency) and construction (rehabilitation issues in developed countries, infrastructures and water networks in emerging countries)."

JEC Composites’ study finds the composites market (the final parts processing market) represents a worldwide market of €62 billion (US$78.7 billion), divided between North America (40 percent), EMEA Europe, Middle-East, Africa (31 percent) and Asia/rest of the world (29 percent). In volume, the global market accounts for 8.6 million tons. The forecast calls for a growth rate of 4 percent in volume until 2013. The growth in North America and Europe should be around 3 percent while Asia could be 6 percent.