s your next-generation distribution network better served by fewer, but larger, facilities, or by more, but smaller, facilities?

That depends. For some, the "new paradigm" may call for smaller facilities with smaller ranges. For others, a more centralized network may ring true.

Logistics models in either case will be driven by trends such as rising fuel costs, a rise in domestic "re-shored" manufacturing, the evolution of mega-regions and even the emerging trend of collaborative logistics, whereby companies attempt to merge networks on a spot or regular basis to realize efficiencies of scale and of container use. Perhaps most important of all is a trend towards proximity to critical customers. Many companies, led by giants such as Kraft, are using the ultimate bypass and finding new ways to ship orders directly from plants to those top customers.

"It's been handled less, and is subject to less damage," explained Scott Boyer, associate director of transportation – customs, Kraft Foods Global, Inc., at a session on customs at the Americas Competitiveness Forum in Atlanta in November. "What we'd like to be able to do is direct-plant shipments across the border. Kraft has actually shipped direct to a customer. We just started, but there are substantial challenges involved."

Professionals like Boyer are after lowest landed cost. He said he sees inventory in transit as capital in transit.

"Several years ago, someone at Kraft said if you could take one day of inventory out of our network it would save $1 million in capital," he said.

The map below depicts the relative strengths of locations based on how many times their regions occurred in a Cushman & Wakefield Business Consulting analysis of DC networks ranging from one U.S. location (Indianapolis was the preferred option) to 15 (which brings Denver into the picture).

Initial analysis by Cushman & Wakefield Consulting Partner John Morris, a member of the Oversight Committee for the U.S. Transportation Research Board, looked at states' geographic centers. A more nuanced take evaluated the nation's top 82 warehouse markets for their potential as an "optimal" DC location, going forward, as the need for DC space closer to customers will rise. His team measured expected over-the-road outbound truckload costs, only, using a state-to-state truckload matrix and point-to-point rates per mile, taking into account the direction of travel. Demand was based on the aggregation of population at a 3 digit zip level.

The data reveal some possibly surprising locations that keep showing up in multiple scenarios: , for instance, as well as , ; , ; and

Based on freight over the road to consumers, explains Morris, is surrounded by somewhat limited population. "The Chattanooga/Valdosta approach to covering , and appears to make more sense in this model," he notes. The solution appears to suit Amazon.com, which at press time was in negotiations for two distribution centers in that city and nearby that would mean 1,400 jobs and $164 million invested.

Why does appear only once in the Cushman & Wakefield transportation analysis, in the six-DC model? The city is "certainly a strong DC location, but, as the model grows, it instead seeks to add space in Midwest locations that surround ," notes Morris. And why no Dallas-Ft. Worth? Morris explains that "appears to tandem well with " in covering .

Morris says if a DC is a dotcom-fulfillment, small-package facility, its network would be much different than that for a normal store-fulfillment network. "E-commerce facilities are not as sensitive to distance and location-based differences in freight costs and should attempt to locate where they may not compete as much with store fulfillment DCs for qualified labor."

Conway Data analysis of new and expanded corporate logistics facility projects between July 2009 and July 2010 falls in line quite well with this map and with a similar methodology employed by Chicago Consulting Managing Partner Terry Harris. But balancing where the people are with where the buildings and multi-modal infrastructure are best brings a few exceptions to demographics into the mix: strong performances by such metro areas as , Dallas-Ft. Worth, and .

The Wait for More Weight

Even as the EPA promulgates new fuel efficiency standards for trucks, a pending measure before Congress might raise allowable truck weight limits by as much as 20 percent, to 97,000 lbs. The measure is part of twin transportation bills currently in House and Senate committees. According to a report in The Wall Street Journal, Kraft, for example, would use 6 percent fewer trucks and save 6.6 million gallons of fuel annually. MillerCoors, the paper reported, would reduce its weekly rig count by 25 percent.

What might such a development do to a DC network? Among the principal effects, says Terry Harris, "It's going to make truckload transportation more cost-efficient. So that would mean things such as 'we can ship more from a plant than we can from a warehouse.' Kraft is a big-time example of the benefits of this."

On the other hand, efficient truckload transportation allows you to ship to a remote regional warehouse more efficiently, and have it have a bigger scope. For a company that doesn't have customer orders in truckloads [they're all LTL or less than truckload], that might expand the role of the regional network."

Harris thinks companies do too little direct-plant shipping. "By and large, companies set up regional warehouse networks and assign six territories to them, and they don't look at what I call flexible sourcing, which means looking at an order and deciding how that order should be fulfilled — plant or warehouse, which warehouse, or maybe even split by products ABC from one place and DEF from another, or back order part of it. The idea of flexible sourcing is treating every order uniquely, rather than fixed territories and customer assignments."

Harris says flexible sourcing was part of the promise of sophisticated transportation management systems, but that in general "they have not fulfilled that promise," concentrating on narrow fields such as carrier choice rather than, say, whether the order "should have come from the plant in Chicago."

Harris says in his analysis for clients eastern continues to rise to the top, thanks to its proximity to chugging marketplaces in the Northeast, and its distance from " congestion, taxes and difficulties in business climate, not the least of which are driven in part by unions." He also sees enduring performance in and , and strong growth in and .

There's one area in which Harris says no ports or communities are ahead of the game: the July 2012 deadline for X-ray scanning every single shipping container coming into the United States, whether at ports or at land border crossings such as Nogales, which sees 1,700 trucks a day. While it may not provoke the headlines that TSA body scanning has wrought, the fancy dancing it's making ports perform has some foreign governments up in arms, and could have economic consequences.

Harris foresees some companies backing themselves up with longer lead times, and potentially suffering increases in inventory to guard against delays.

Mike Crosby, president and CEO of international surveillance and communications technology and solutions provider Aria International, said in an interview this fall that his company is aggressively pursuing business in this sector as that 2012 deadline approaches. He said it's a political hot potato for the 2012 election, and that the Department of Homeland Security has the authority to delay the deadline for two years. DHS said as long ago as early 2009 that it would not be able to meet the deadline.

Aria is working with a number of foreign countries — including nations in Southeast Asia, Europe and — to create public-private partnerships to handle scanning duties. Evaluation of the technology involved is ongoing at the new for Border Security and Immigration in , a DHS center of excellence led by The University of Arizona and The University of Texas at .

A 2010 report from the European Commission said "a total of €430 million [US$598 million] would be required for investments for scanning and radiation detection including significant changes in infrastructure to create space for extra facilities for ports and terminals involved in U.S.-bound container traffic. Operational costs in European ports would rise by more than €200 million [US$278 million] annually, including expenditure for 2,200 extra staff."

Crosby says one Asian nation, for example, would need to spend approximately $25 million to support the operation of about 12 mobile scanners and keep goods flowing from its major port, where 70 percent of outbound traffic heads to the U.S.

"That's about $24 million that the government doesn't have, but the port is terrified they have to put their economic well-being in the hands of our U.S. Congress." That very same Congress may yet provide some salvation: Two measures introduced in 2010, and currently in committee, would delay the July 2012 deadline until the technology has evolved sufficiently, or allow less intrusive scanning to suffice. 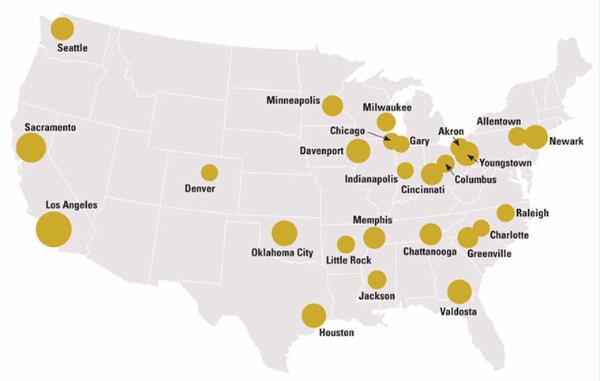 The city circles on this map are sized according to how often they appear in a Cushman & Wakefield truckload shipping analysis of most cost-effective DC networks, from one facility to 15. 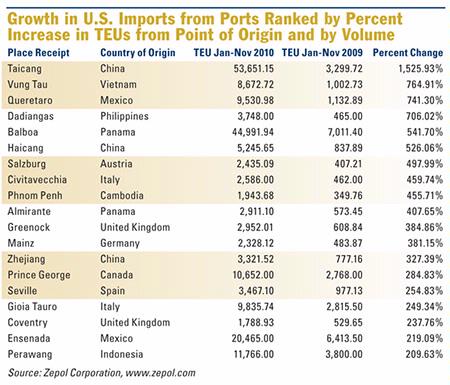 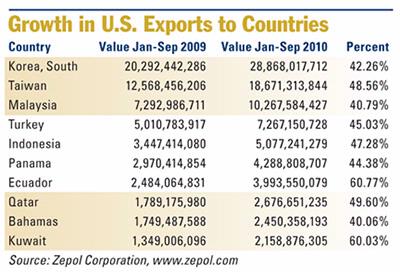