Meeting customer needs is job one for expanding companies in Maine. 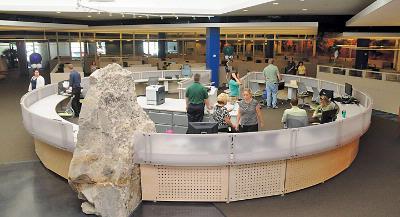 MMG Insurance Co. has doubled the size of its corporate headquarters while steadily increasing its work force over the past 10 years.

"We have doubled in size the last 10 years in revenue from written premiums, and our work force is up from 115 to about 165 today," says Shaw, president and CEO of MMG, which in September was named the Insurance Company of the Year by the Maine Insurance Agents Association.

"We occupy about 50,000 square feet [4,645 sq. m.], which is double what we had prior to our expansion in 2007," Shaw adds. "We are so keen on being located in Maine that we built this addition with the concept of future growth. We probably have a good 10 to 15 years of growth here before we have any pressure on the facility."

Shaw credits his firm’s solid growth to one primary factor: the work force of northern Maine.

"Our location allows us to provide something that is very difficult to compete with, and that is our ability to provide exceptional customer service," he says. "Our people have a natural inclination to be very nice, and they understand the need to take care of the customers’ needs. The work force here provides us an opportunity to perform highly."

The MMG work force expansion is part of a building IT and telecommunications job-creation wave throughout Maine.

Walter Elish, president and CEO of the Caribou-based Aroostook Partnership for Progress, says the customer-oriented skills of the work force make Aroostook County a haven for operations such as Sitel and the Defense Finance and Accounting Service (DFAS).

"Sitel is a customer contact company with call center facilities all over the country," explains Elish. "They employ 300 people here on average, and they have been able to thrive here because of the productivity of the labor force." The DFAS center is one of only five left in the country following the latest BRAC closure round.

"The center in Limestone, Maine, is one of those five," says Elish, "and it survived the latest round of defense spending cuts because our labor force is so highly coveted."

Another firm, BalanceBPO, decided to locate in Aroostook — the largest county by area east of the Mississippi River — because it saw Presque Isle as the best choice for an operation that processes credit cards and debit cards.

"They were considering a facility in Texas, but they chose us because of our people," Elish says. "They now employ about 100 people here."

Elish also cites Virtual Managed Solutions, a software development company, as an example of the region’s recent economic growth. "That company was started after the owner was laid off from his firm in Caribou," says Elish. "Today, VMS writes software for small to mid-sized companies and it is doing very well."

Elish notes that plants based in northern Maine often outperform their counterparts in other parts of the country. "Labor force is a big location advantage here," he says. "It will often be cited as the main reason why companies choose to locate here. Our focus has been to try to diversify our economy, and we are having some success with that effort. MMG is a great example."

MMG’s Shaw adds that incentives played an important role in helping his company to expand. "We were able to attract a couple of incentives when we did our addition, both through the city and through the state," he says. "The Aroostook Partnership has been a strong advocate for the company."

The sector’s momentum is not confined to the state’s vast upstate, however. TD Bank added considerably to Maine’s job base in July when it located 500 new workers in a 60,000-sq.-ft. (5,574-sq.-m.) call center in Auburn, about half an hour north of the Portland metro area. The $16-million investment is designed to achieve LEED-Gold certification.

"This facility will provide 24/7 support for our bank’s customers," says Jimmy Hernandez, spokesman for TD Bank. "This is a major green project for our company, and it will serve all of our customers."

"The Lewiston-Auburn area is an important employment base for TD Bank," said Bharat Masrani, president and CEO of TD Bank. "The talent and legendary work ethic of employees in the Lewiston-Auburn region is one of the reasons we chose to locate our newest call center here."