In the nation’s center, a solid work ethic is one of them. 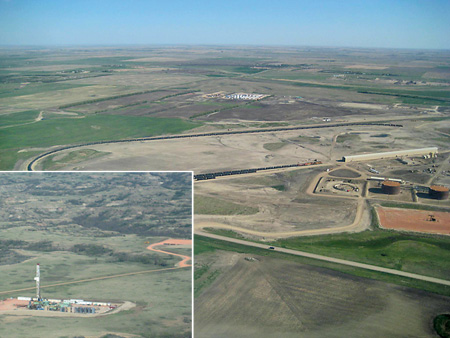 SELF-SUFFICIENT REGION: A new rail facility from EOG Resources carries a unit train per day of oil from the edge of the Williston Basin in Stanley, N.D., south to Cushing, Okla., home of the nation’s largest tank farm. Pictured in the inset is one of the hundreds of oil wells sprouting amid a welter of activity in North Dakota’s Bakken and Three Forks shale formations.
W

hen a business caucus survey conducted during the state's 2010 legislative session by the South Dakota Chamber of Commerce and Industry asked members to describe how their business had been during the previous year, the top two selected responses were "Our business has kept strong throughout; feeling a bit guilty" (31 percent) and "Hard year but we kept staff tightened up and worked harder" (26 percent).

Those answers tell you all you need to know about an entire region's economic and psychological outlook, composed of equal parts stoicism, fiscal conservatism, long-term perspective, short-term sweat and all-around good humor.

State GDP growth rate numbers released by the U.S. Bureau of Economic Analysis in November bear out the theory that the Plains states of North and , , , and have weathered the recession better than most, with four of the six in the highest quintile. had the 6th highest overall GDP increase from 2008 to 2009, with a 1.4-percent increase and total GDP of $38.3 billion, led by the healthcare, finance and insurance industries.

Among the most recent energy investments in the was the late November announcement by Borets-Weatherford, a global provider specializing in the engineering, manufacture, sales and service of Electric Submersible Pump (ESP) systems for the oil and gas industry, that it would establish its North American headquarters and an R&D, engineering and training facility in .

Borets-Weatherford, an Oklahoma Quality Jobs Program participant, purchased the former Ramsey Winch facility with plans to make a significant capital investment in upgrades in 2010 and 2011. The investment, along with the 26 current employees, supports a $52-million economic impact in the region. Borets-Weatherford will consider different options for the available shop space and could employ up to 125 individuals in the area in the next two to three years. The Tulsa Metro Chamber, among others, supported the project.

Borets-Weatherford opened in a temporary location in in 2009. The company moved into its new facility in August 2010. Raymond Standridge, the company's vice president of North American operations, said the company chose the Tulsa region for several reasons, including Oklahoma being the birthplace of ESP technology, excelent university and technology center educational programs, a readily available professional work force and the attractiveness of the Quality Jobs Program, which offers enhanced incentives for job creation, allowing existing and new businesses to take advantage of both tax rebates and tax credits providing they meet the criteria for payroll and job creation.

On Dec. 22, the state announced that another energy services company, Baker Hughes, had been accepted into the Quality Jobs Program. The company, which already employs 2,400 people in the state, could create up to 667 direct, indirect and support jobs over the next 10 years as a result, and already has added approximately 91 qualified jobs since its acceptance into the program.

"We are committed to ­—and to the region in particular — as a core area for our manufacturing and supply chain organization," said Art Soucy, vice president of supply chain for Baker Hughes. "The skilled work force, our long-time investment in major manufacturing plants, and the local distribution channels to global markets make the area a good choice for our operations."

In early December, Siemens (see profile on p. 38) celebrated the official opening of its new wind turbine nacelle assembly facility in , , its first in the The 300,000-sq.-ft. (27,870-sq.-m.) facility will soon ship its first nacelles to wind farms in . Its payroll of 130 is expected to triple once the factory is fully operational. The operation opened the same week that the company announced new wind turbine manufacturing locations in Tillsonburg, Ont., and .

' friendly rival is getting in on the wind action too. On the first day of winter, Dec. 21, 2010, a 200-job, $16-million wind turbine technology investment blew into , from Nordic Windpower. A $5.6-million incentive package includes resources from the state's Community Development Block Grant, new jobs training, and employee recruitment and referral programs, as well as sales tax exemptions for equipment and machinery purchased. Nordic will relocate its headquarters and operations from and to facilities near overseen by the Kansas City Aviation Department. The company also explored locations in and .

"We appreciate the warm welcome from Governor Nixon, and the work of the Missouri Partnership, Kansas City Area Development Council, and the Economic Development Commission of Kansas City in helping us to make this important decision," said Tom Carbone, CEO of Nordic Windpower. Support also came from Kansas City Power & Light and .

The move comes a scant two and a half years after Nordic announced a new turbine manufacturing facility in . That investment was supported in part by a $16-million conditional loan guarantee from the U.S. Dept. of Energy. Early in 2010, the company received an injection of $38 million in a round of equity financing led by Khosla Ventures.

Reached by phone the day of the announcement, Carbone confirmed that the company would gradually move to and shut down the leased site. He said the site search began in February 2010 with the assistance of Newmark Knight Frank, and followed a set of nine criteria that included ability to attract professionals, proximity to the wind resource ("essentially from Texas up to the Dakotas," he said) and access to transport options for its large, heavy components. Last on the list, said Carbone, was the incentives package, which came into play once his team had narrowed its search from 14 areas in 11 states to just a handful.

The company will occupy two existing facilities near KCI airport, including a former overhaul facility American Airlines shut down in September 2010. "We'll be occupying that space to assemble turbines in the short term," said Carbone.

Nordic has secured the DOE loan guarantee commitment, but has not drawn down on it. Carbone says by the time Nordic closes the loan, the move to K.C. will be complete, and the loan proceeds will be used for equipment, tooling, component parts and to reimburse some expenses related to design and development. "From that perspective it is transferable," he said, "in that it was not going to be used on bricks and mortar."

Carbone praised the community for its quality of life, supplier network and strong university alliances. "Unfortunately," he said, "it was not in what we saw to be the market where future projects would be sold and developed. Transferring material out to and then having to transfer it back to the could affect our cost base."

K.C. is not the only community feeling a breeze. Earlier in December, Vest-Fiber, a Denmark-based supplier of fiberglass products and services primarily to the wind turbine industry, chose Moberly, just northeast of , to be the location of a new manufacturing facility. An investment of $2 million will create 50 new local jobs. "In our search for the ideal location, we found to be the strategic center of all wind-related production facilities in the ", said Hans Leerskov Hansen, business development manager of Vest-Fiber. "We were also pleased to find the right skills and work ethic available."

The new facility in Moberly should be operational by February 2011. The project was announced the same day that a separate 100-acre (41-hectare) site in Moberly, was designated as the state's sixth Certified Site. 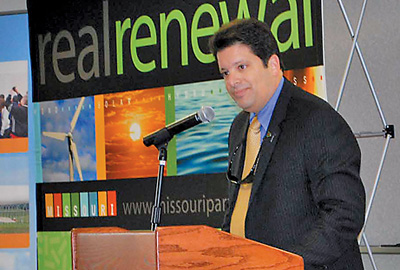 variety of energy resources, from shale oil in to shale gas, ethanol and wind, supports the Plains region's stable economy. Moving energy through the region also means big economic development: TransCanada's controversial Keystone XL pipeline expansion still awaits approval by the U.S. State Department, but the states through which it passes are preparing for it as resolutely as they do for any other change in the weather.

's Bakken and other oil shale formations continue to stoke economic activity. As of October 2010, according to the North Dakota Industrial Commission Dept. of Mineral Resources' Oil and Gas Division, the state's record high 166 active oil rigs were producing 342,347 barrels per day in the state, also an all-time record high.

"Over 95 percent of drilling is still targeting the Bakken and Three Forks formations," wrote department director Lynn Helms in a Dec. 15 note. "The major wind and snow storm the week of October 25th delayed hydraulic fracturing and truck transport of oil. With 75 percent of oil production transported by truck from the well site winter weather can impact average daily production significantly."

So much the better for rail and pipelines.

"There are three additional pipeline and rail projects in the review or engineering stages, two that are under construction, and one that just concluded an open season," wrote Helms. "The U.S. State Department decision on the Keystone XL pipeline continues to generate significant controversy."

The projected economic development spinoff of that pipeline, however, appears to generate more jobs than consternation (see chart). is even offering a property tax exemption. Analysis published in June by The Perryman Group in concluded that the total economic impact on the economy over the 100-year life of the project included $20.931 billion in total spending, $9.605 billion in output, and 118,935 person-years of employment, in constant (2009) dollars.

INTERVIEW WITH MISSOURI PARTNERSHIP: The Key to More Partnerships (Sep 16, 2021)