‘Gold Mine’ Or
Flash In The Pan?

The number of practical applications developed thus far for graphene
can fit on the head of a pin … a very tiny pin. 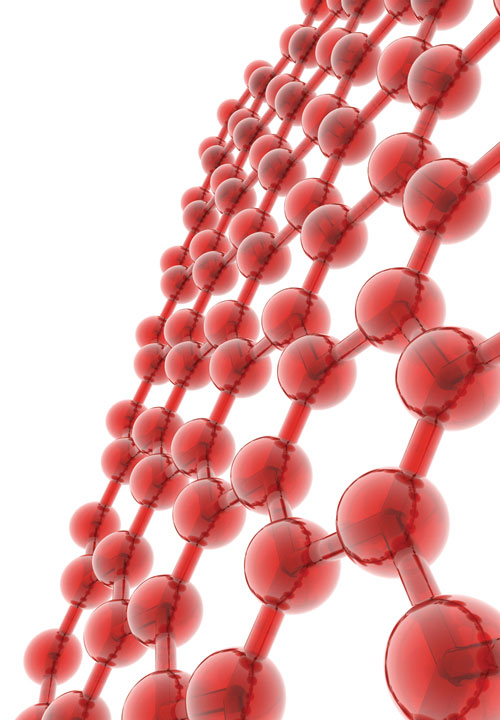 by DEAN BARBER
I 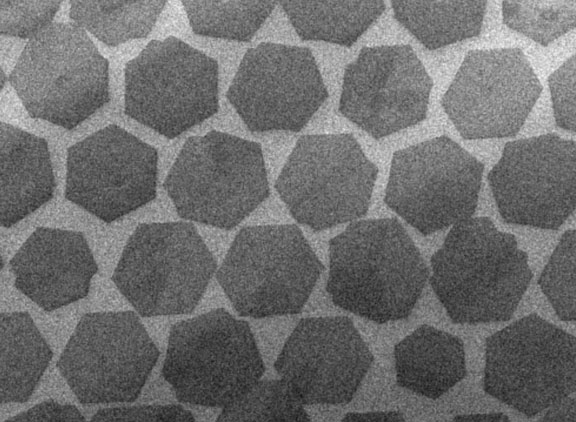 This scanning electron microscope picture shows individual crystal “grains” in an array of a material called graphene. Researchers have developed a method for creating the arrays, an advancement that opens up the possibility of a replacement for silicon in high-performance computers and electronics.
Image courtesy of University of Houston

t is being touted as a miracle material, capable of all kinds of things that will change life in profound ways. Indeed, the promise of graphene, the subject of an estimated 3,000 research papers in 2010, has many people in academia and industry almost giddy with excitement.

Some say it could spell the end for silicon, and change the future of computers and other devices forever. Others speak of graphene being 200 times stronger than structural steel and how it would take an elephant, balanced on a pencil, to break through a sheet of graphene the thickness of Saran Wrap.

But if any miracle properties do exist, they have only ever been demonstrated on the tiny nano scale — with the exception of Graphene Devices Ltd., a SUNY-Buffalo spin-off making graphene-based materials for defense contractors. The nagging truth is that work to commercialize graphene, which is essentially a one-atom, single layer of graphite, is today largely confined to laboratories.

But its potential is intriguing and could one day include new high-tech hubs that fuel local and regional economic development. Penn State researchers are producing 100-mm.-diameter graphene wafers for future use in super-high-speed electronic devices. University of California at Riverside and Rice University researchers are working on development of graphene amplifiers for future use in Bluetooth headsets, among other applications.

"Graphene can trigger a smart and sustainable carbon revolution, with profound impact in information and communication technology and everyday life," writes "Gabriel," co-proprietor of InfoGreenGlobal.com, an alternative energy news Web site, in a May 2011 post. "Its unique properties will spawn innovation on an unprecedented scale and scope for high speed, transparent and flexible consumer electronics; novel information processing devices; biosensors; supercapacitors as alternatives to batteries; mechanical components; and lightweight composites for cars and planes."

But some researchers familiar with graphene remain skeptical.

"It’s been described with almost every superlative under the sun, and the one they left out is that it is the most hyped material in the world," says Dr. Walter A. de Heer, whose team at the Georgia Institute of Technology was the first to file a patent for a process of making simple electronic devices using graphene.

The Georgia Tech patent was filed in 2003, a year before graphene was "discovered" and seven years before two researchers in the United Kingdom were awarded the Nobel Prize in 2010 for their work on graphene.

Said one of the Nobel winners: "From the point of view of physics, graphene is a gold mine. You can study it for ages."

The problem is that it essentially has been studied for ages, or at least a pretty long time, says de Heer. And some researchers may be ignoring the body of work that came before them.

"This is the most massive repackaging campaign that I have ever seen in science. Ninety percent of what you see that is being sold as graphene is regular old graphite," de Heer says. "Now I am not saying that graphite is not interesting. I think it is an extremely interesting material. But it is not a new material. So in order to stimulate interest, you put a spotlight on it and give it a new name and attach some fancy anecdotes to it."

In the mid 1890s, Edward Goodrich Acheson discovered that overheating silicon carbide produced almost pure graphite. He had found that silicon vaporizes at about 4,150° C (7,500° F), leaving behind graphitic carbon. This graphite was another major discovery for him (he would log more than 70 patents in his lifetime), and it became extremely valuable as a lubricant. The Acheson Graphite Co. was formed in 1899. In 1928, his company was merged with National Carbon Co. (now Union Carbide).

Fast forward to 1956, when Union Carbide opened its Parma Technical Center just outside Cleveland. Two years later, Roger Bacon discovered "whiskers," carbon fibers, which are polymers of graphite, in which the atoms are arranged in big sheets of hexagonal rings that look like chicken wire. With his discovery, some claim Bacon was the first person to produce carbon nanotubes — hollow cylinders of graphite with diameters on the order of single molecules.

The point is simple — there was a large body of research on graphite well before any "discovery" of graphene was announced. In terms of mechanical properties, graphene and graphite are identical, says de Heer.

"The only difference between graphene and graphite is that graphene has one layer while graphite has many," he says.

If graphene holds any real promise for commercial application, at least in the near term, it will be in the area of electronics, and even there he throws in a caveat.

"Graphene does promise to have some new electronic properties that are not seen in graphite," de Heer says. "But it is very difficult to exploit these properties, and actually to this day no one has succeeded. No one has succeeded in making graphene do something truly better than you can do with conventional electronics."

But they are trying. At IBM, the push is on to use graphene to make smaller and faster transistors. The research at IBM indicates that high-performance graphene-based transistors may be produced at low cost using standard semiconductor manufacturing processes.

"We are getting preliminary results that show that graphene can be grown on a large scale practical for an industrial manufacturer," said Yu-Ming Lin, a researcher at IBM, in a May interview. The company believes that commercialized graphene transistors will provide a performance boost in applications related to wireless communications, networking, radar and imaging.

"Within five years we should be able to see some commercial product," said Lin. "One of the things that we also emphasize is the ability to manufacture these new devices using wafer-scale technology that some conductors are adopting. This is certainly achievable using graphene. We have demonstrated wafer-scale production on a two-inch wafer, and in the foreseeable future we expect to grow to larger and larger dimensions."

In June, in a paper published in the magazine Science, research scientists at IBM announced that they had achieved the first integrated circuit fabricated from wafer-size graphene, and demonstrated a broadband frequency mixer operating at frequencies up to 10 gigahertz (10 billion cycles/second).

"Despite significant scientific progress in the understanding of this novel material and the demonstration of high-performance graphene-based devices, the challenge of integrating graphene transistors with other components on a single chip had not been realized until now," said an IBM release, "mostly due to poor adhesion of graphene with metals and oxides and the lack of reliable fabrication schemes to yield reproducible devices and circuits.

"This new integrated circuit, consisting of a graphene transistor and a pair of inductors compactly integrated on a silicon carbide (SiC) wafer, overcomes these design hurdles by developing wafer-scale fabrication procedures that maintain the quality of graphene and, at the same time, allow for its integration to other components in a complex circuitry."

IBM recently opened the Binnig and Rohrer Nanotechnology Center — a facility for world-class nanoscale research recently opened on the campus of IBM Research – Zurich. The building is the centerpiece of a 10-year strategic partnership in nanoscience between IBM and ETH Zurich, one of Europe’s premier technical universities.

Graftech has filed more patents in graphite material science, with nearly 800 patents, than any company in the world, says Lionel Batty, vice president of corporate research and development.

Graphene is interesting, but the technology of making it commercially "is just not there yet," Batty says.

"There are essentially two ways to make graphene — build it up from the molecular level or break something graphite down to the graphene level. The problem with building it up from the atomic level is that the methodologies that people are talking about are essentially at lab scale and high cost," says Batty. "The issue is whether someone can make it at a low enough cost and high enough volume to really matter."

Graftech currently makes a thin flexible graphite product called SS1500, or Spreadershield, that serves as a passive heat spreader and heat shield. It can be die-cut, press-formed, or laminated with plastics, metals, adhesives, and other materials. It is used in cell phones, laptop computers, handheld gaming devices, batteries, projectors, set-top boxes and automotive electronics.

"We are watching and waiting. If something happens, we would like to be involved and engaged and help scale it up and commercialize it, but I wouldn’t have a prediction on when that may happen. I simply do not know," he says.

Just as GrafTech has pioneered the use of graphite in heat spreaders for consumer electronics applications, graphene has thermal properties that may allow it to remove heat from electronic devices. That has been the focus of the research by Dr. Alexander A. Balandin at the University of California, Riverside.

A longtime problem facing the electronics industry is the removal of heat, which is a byproduct of the computation in your computer chip. You come to understand that when you put a laptop computer on your lap.

"Graphene has extremely high thermal conductivity. So if it is incorporated in the chip design, it could possibly get rid of hot spots," Balandin says. "That would mean that electronic devices would work better and faster, and their lifespan would be longer."

Such an application may not require high-grade or pure graphene, he says, which may allow a product to come to market sooner. But for all its potentials, Balandin says graphene will never be the end-all and replace silicon. Rather, it will work in concert with it.

Because graphene does not have certain on-off switch properties that silicon does have, that in itself will limit its use in electronics. "Graphene may come to occupy a certain niche in electronics," he says.

Like de Heer at Georgia Tech, Balandin cautions that graphene remains at the lab level.

"There have been a number of different materials that have initially shown a lot of promise and excitement but later on did not lead to much," he says.

Because it is a transparent conductor, some see graphene as the eventual replacement material for indium tin oxide, essentially a conducting glass and the current standard material for transparent electrodes used in LCD displays, solar cells, iPads and smart-phone touch screens.

Samsung, the Korea-based consumer electronics maker, may be on the verge of coming out with touch screens made from graphene. At least, those are the rumblings coming from the company. But observers note that Samsung has in the past promoted future products that have never come to fruition.

Even if such a product were to come to market, de Heer would view it from a certain perspective.

"To me that is all very interesting, but not earth shattering," says de Heer. 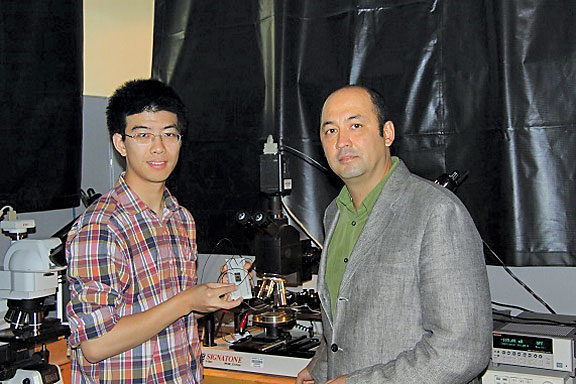 Prof. Alexander Balandin (right) with his student Guanxiong Liu, who is holding the very first graphene amplifier and phase detector built in Balandin’s Nano-Device Laboratory at the University of California, Riverside. 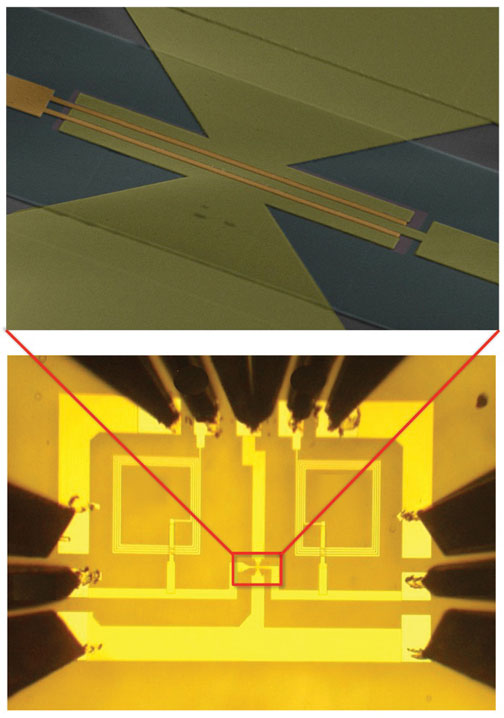 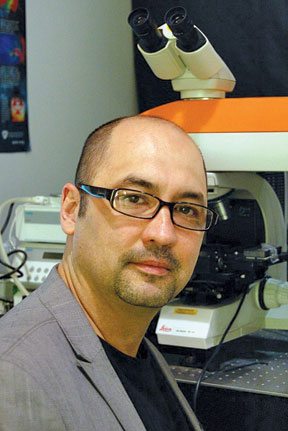