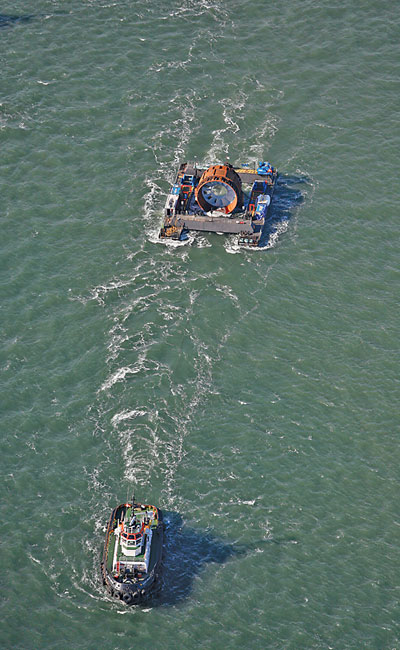 North America’s first commercial-scale tidal power turbine, a 1-MW unit from OpenHydro, is towed into position at the FORCE test site in the Minas Passage, Bay of Fundy in 2009.
Photos courtesy of FORCE

Industrial skills and a sense of sustainability conspire to bring new energy to a regional economy in more ways than one.

tlantic Canada has taken heat over the years for its overfished waters. The kinetic energy those chilly waters produce may be harder to deplete.

The Bay of Fundy pushes over 100 billion metric tons of water every tide. How strong is that tidal force? Turbine developer OpenHydro and its partner Nova Scotia Power found out when they retrieved their first 400-ton demonstration unit from the bay in December.

"The structure appears to be in excellent condition overall and, consistent with the images we obtained this summer, we now know that all of the blades are missing from the center of the unit," explained OpenHydro CEO James Ives. "It's too early to be certain, but it appears this is the result of the tidal regime being much stronger than we initially believed."

Leading the way in Nova Scotia is the Fundy Ocean Research Center for Energy (FORCE). Current research suggests up to 2,500 megawatts may be safely extracted from an area surrounding FORCE's location on the Minas Passage — more than Nova Scotia's total electricity demand. FORCE is scheduled to host four of the world's most advanced tidal technologies in 2012, and is currently fabricating four lengths of submarine cable with a combined capacity of 64 megawatts. The projects mesh well with the province's plans to quadruple its supply of renewably sourced electricity by 2020. The provincial government passed regulations last fall that will encourage the development of commercial, transmission-connected tidal arrays through the establishment of a feed-in tariff, or guaranteed price, for electricity sold to the Nova Scotia grid.

"With four turbines and the largest submarine cable capacity in the world, total project investment at FORCE will exceed [C]$100 million," said John Woods, chair of FORCE, in May. "That represents significant economic activity and jobs in our province — and we are just getting started." The total capacity of all four cables will be about 64 devices, enough power for more than 20,000 homes.

Participants in FORCE include Nova Scotia Power (with OpenHydro), Alstom (with Clean Current), Minas Basin Pulp and Power (with Marine Current Turbines), and Atlantis (with Lockheed Martin and Irving Shipbuilding). Funding partners include the governments of Canada ($20 million) and Nova Scotia and Encana Corp., as well as the participants.

Job creation and retention has resulted at the existing Nova Scotia operations of Lockheed Martin and Irving, as well as at firms such as IT International Telecom, whose contract for half the cable installation has provided approximately 100 jobs. The cables themselves are being manufactured by Prysmian at a facility in Arco Felice, Italy.

FORCE spokesman Matt Lumley says a supply chain analysis of the marine energy sector is now being conducted by the province. He says contracts alone have resulted in hundreds, perhaps thousands, of person-years of work for a work force that can boast 25 years of offshore oil and gas experience, represented by some 300 supply and service companies offering skills and technology in such disciplines as surveying, barge and towing, offshore structures and engineering and project management.

That said, Lumley admits the Minas Passage is not exactly teeming with industrial activity.

As regulatory approvals occur, Lumley says FORCE will have the capacity to scale up to arrays of between five and 10 devices each. In the meantime, regardless of where in the world they wish to locate their devices in the end, technology developers want to come to Fundy first.

"If you can survive here and make power safely and reliably, odds are you'll be able to do it anywhere," says Lumley.

DSME is contributing $20.4 million for 51 percent of the venture, while the province has a 49-percent stake. The Canadian government has contributed another $10 million. DSTN has hired 115 workers initially, who are already fulfilling orders for 30 towers.

Central to the company's success thus far has been a training partnership with Nova Scotia Community College. At the plant inauguration, DSTN announced a further research partnership with Dalhousie University. "The progress we see here today underlines that we are well on our way to creating a renewable energy cluster in Nova Scotia," said DSTN CEO Nam-Ki Lee.

Back in Newfoundland and Labrador, there are indications that the fishing industry is taking steps toward renewable status itself, as new aquaculture operations take root.

Supported by $8 million from the province, Northern Harvest Sea Farms, which also has operations in St. George, New Brunswick, is investing $23.5 million in a new salmon hatchery in Stephenville, and expansion of its cage farming operations in the Coast of Bays region.

More good aquaculture news came in June when New Brunswick–based Gray Aqua Group, which also has ongoing operations in Newfoundland and Labrador, said it would purchase and reopen a fish processing plant in Hermitage, N.L. The firm's last major investment came three summers ago when it announced a $16-million, four-site salmon aquaculture operation in the Bay d'Espoir region of New Brunswick.

The Hermitage reopening announcement this summer came one week before the Government of Newfoundland and Labrador became the first jurisdiction in Canada to release a Coastal and Oceans Management Strategy and Policy Framework.

"As Newfoundland and Labradorians, we are tied to the ocean and our coastal areas through our history and our culture," said Clyde Jackman, the province's minister of fisheries and aquaculture. "Protection and sustainable development of these areas is a priority for our government and will continue to be so." 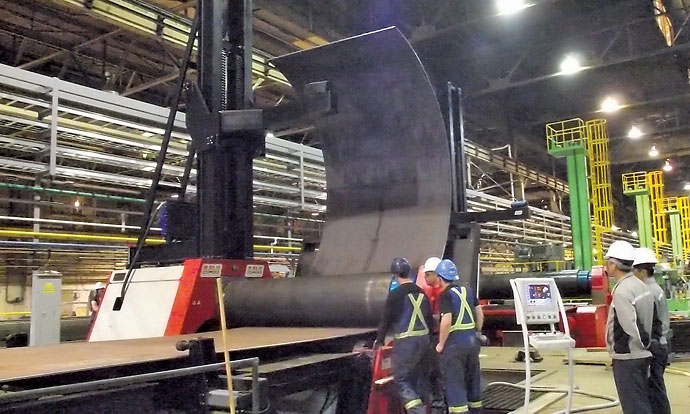