States that exempt or abate property and
sales taxes on computer and telecom
equipment will soon make the short lists
of data center site selectors. 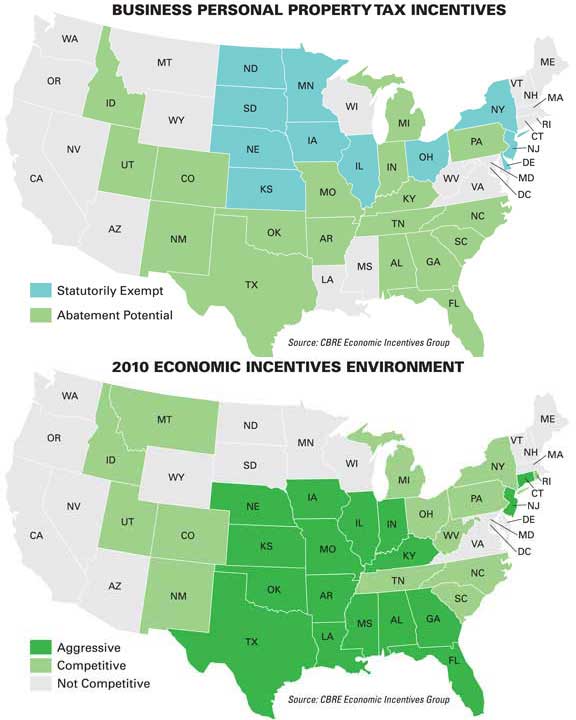 ata centers don’t set records for new jobs created when the switch is thrown for the first time and the servers and cooling systems come to life. But they are prized projects nonetheless, and savvy states fight aggressively for them. States have a direct influence on two of the three most important data center site selection factors — property taxes and sales taxes. The third, power rates and availability, is the province of the utilities and their commissions.

By one measure, power is the most important factor. Fifty percent of respondents in the latest (spring 2011) Jones Lang LaSalle Data Centre Barometer, issued by the firm’s London-based Data Centre Advisory Group, rank availability of power as the most important factor in choosing a new data center, followed by location and efficiency of the center.

Other factors are important, too, including latency (data’s time in transit), geography, incentives and lack of natural hazards. "For financial institutions, processing trades is more important than backing up email, so latency is a very big play for them," says Bo Bond, managing director at Jones Lang LaSalle in Dallas, who co-manages the firm’s data center practice globally. "You see it also being critical in the gaming industry, because of the amount of content riding on the pipe. Many of those companies tell us they have to be located in the central part of the United States or that they need an eastern and western hub to cover that requirement. It varies according to the vertical within the industry."

Bond moderated a panel discussion involving economic developers and utility representatives at a data center symposium May 19 in Dallas hosted by that city’s Integrated Design Group, an architectural, engineering and design firm focusing on data centers. Among the points discussed at length, says Bond, was the role of state and local taxes: "There is a significant tax burden that could potentially be mitigated based on choosing one side of the river or border over the other. We spend a lot of time evaluating that. I’ve seen projects completely pick up and move from the preferred state due to a potential tax implication that would be hundreds of millions of dollars over the life of the lease or the useful life of what these people think a building has. It’s extremely important."

A more recent requirement for many data center users is sustainability, especially given their energy consumption. "Some data center users — enterprise-wide or otherwise — are trying to be greener in their construction and energy usage," says John Lenio, economist and managing director of CBRE’s Economic Incentives Group, in Phoenix. "We’re having more discussions lately about the fuel mix of power generation. Some companies are very concerned about their carbon footprint, and if they have a choice between opening a data center in a high-carbon-based market and a market with a higher renewable energy standard already in place, the tie breaker goes to the power provider and region that has more renewable power."

"For capital intensive data center users, the [regret] tends to be, ‘I wish we had chosen a lower net-tax environment, even with incentives,’ " says Lenio. "Incentives only mean something in the context of the taxes you’re paying. A 50-percent abatement of $3 will be higher than the 50-percent abatement of $1." See the maps showing the states with property tax exemptions and abatement potential and the 50 states’ economic incentives environment.

"The Carolinas, Iowa, Kansas, Virginia, Nebraska and Tennessee are the main states that come to mind," says Lenio. "Washington and Oregon are relatively interested, but they’re not knocking on our door about data centers every three months, whereas these other states are."

Tier Five projects in the six-tier Nebraska Advantage incentives program exempts all sales tax on project capital purchases and personal property tax for up to 10 years on computer systems for Internet Web portals or data centers. "An important point about this is that you can apply for these incentives on a per-project basis, not per company," noted Mark Norman, senior director of business attraction and retention at the Greater Omaha Economic Development Partnership, to a group of site consultants visiting Omaha June 17th. "For a data center, you’ll never pay property tax on your equipment as long as you’re making a sizable investment." Tier Five projects require a minimum investment of $32 million.

What-if modeling becomes more important — and more complex — if Jim Kerrigan’s assertion that data center users tend to under-project the amount of space they will need during the term of the lease is true. Kerrigan is executive vice president and director of Grubb & Ellis Co.’s national data center group, in Chicago.

"Companies project their growth based on what they’ve done historically, and some factor in how much space they need or don’t need using virtualization," says Kerrigan. "But look at Facebook and how much space they took last year. Every time we thought they were done taking space, they took more. Then they announced they were doing a build-to-suit, and then they took even more space. How do you plan for some of these models that haven’t existed before?" Facebook is building its first data center in Prineville, Ore., and occupies space in several data centers around the U.S.

Factor in mergers and acquisitions, and the science of predicting data center space needs becomes still more imperfect. And that could be an opening for space negotiators to insist on more flexible lease terms than they may have settled for in the past.

"Users have better leverage, because there are more [space] options," says Kerrigan, referring to REITs and other investors and developers building space to house the data processing requirements of an increasingly wired world. Areas hoping to capitalize on the capital investment data center operators and users represent clearly must be able to deliver plenty of bandwidth, space and power.

"An emerging requirement has to do with climate," says David Schirmacher, chief strategy officer for Edison, N.J.-based FieldView Solutions, a consulting firm specializing in data centers. "There is now enough momentum and players using new technologies, such as air-side economizers, that data center site selectors are also looking at locations from a climate perspective. Yahoo sited their data center [in Lockport, N.Y.] not only in a climate that has air temperatures below a certain range for much of the year, allowing them to use air for cooling, but they also located it physically in the direction of the prevailing winds. That is an increasingly significant location factor." (Read Site Selection’s profile of the Yahoo project in the Nov. 2009 issue.) "The benefit," Schirmacher notes, "is massively improving overall energy efficiency by using outdoor air rather than mechanical cooling systems, saving energy and lowering costs.

"I cannot say there is an ideal location for data centers," says Schirmacher, "because it depends on the business. But there are more parameters that go into the equation now, especially this climate requirement, than ever before."