Alcoa’s CSO says if you’re not uncomfortable yet, the goal isn’t high enough. 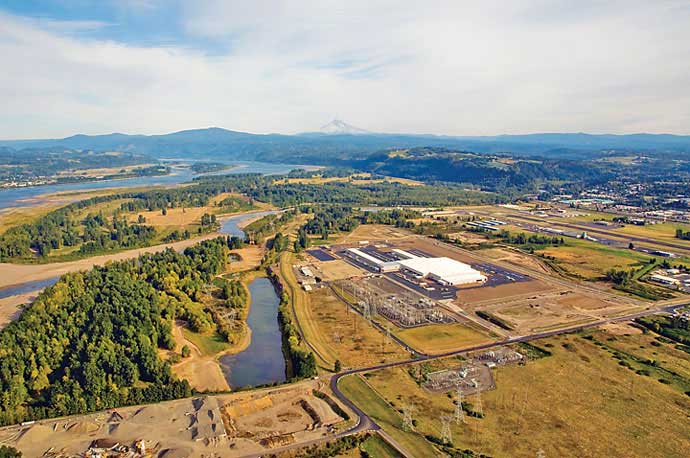 The Port of Portland, Alcoa and FedEx Ground were recognized by the U.S. Environmental Protection Agency this spring with the national Phoenix Award for the top brownfield redevelopment project in the country for Troutdale Reynolds Industrial Park in Oregon.
Photo courtesy of Port of Portland
by ADAM BRUNS
J 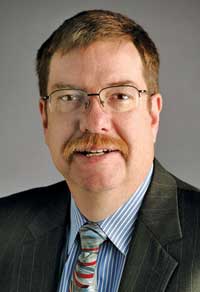 ust last year, Alcoa named Kevin Anton to the newly created position of chief sustainability officer, but the aluminum giant didn’t just discover the concept. In fact, Alcoa was included in the Dow Jones Sustainability Index for the ninth consecutive time in 2010. In May it announced it had exceeded its 2020 goal for carbon reduction, and was the first company to receive silver-level Cradle to Cradle® Certification for primary aluminum.

In an interview, Anton says Alcoa was focused on sustainability well before it was cool, beginning at the top with leaders such as Paul O’Neill in the 1980s and early ’90s, and continuing today under current CEO Klaus Kleinfeld.

"That fact that he took me out of a line job and put me into the CSO role tells you where he thinks it is" in importance, says Anton. "It’s a business imperative. I’m a member of our executive council, which is effectively the leadership that drives the company. Members of my steering committee are a combination of more senior leaders and those who will be leaders in the future."

One level below that steering committee is a working team comprised of content experts from environment, health and safety; product and technology professionals, human resources and communications and government relations, among others. Anton says they are the folks turning sustainability vision into something actionable across the real sustainability team at Alcoa: its 59,000 employees. And the company’s real estate and facilities team is essential to the transformation.

"We have a very talented group of professionals there," says Anton of that team. "We have people who understand the markets around the world, who are good at understanding the infrastructure we have, how to position the properties to compete against others, and how you can transform a building."

Anton brings three decades of global operations and strategy experience to the job, having most recently served as vice president, finance and strategy for Alcoa Global Primary Products, and before that as president of Alcoa Materials Management. His accession to the CSO spot came at the end of a review of the company’s strategic framework for sustainability that began in late 2009. He says about six months of strenuous effort went into the process, and no goals stayed the same on the other end.

"We want to make everybody uncomfortable," he says. "If they’re not, the targets aren’t stretched enough."

Concurrent with the establishment of new goals was the development of a sustainability scorecard to align near-term sustainability targets with business strategy across every business. Beginning in November 2010, each business now reviews its scorecard with executive management at every quarterly business review. The CSO also leads a roadmap approach to longer-term (2020) sustainability goals.

"We use goals and processes just like we would for revenue or EBITDA growth or cash generation," explains Anton. "One topic they have to discuss is how they are tracking sustainability metrics, and how they are using sustainability as a lever in everything they do — new production design, energy efficiency, the footprint of our factories."

But all the planning documents in the world don’t add up to the power of the paycheck: During 2010, 20 percent of the company’s variable compensation was tied to achieving significant aspects of its sustainability targets such as greenhouse gas reductions, energy reductions and safety metrics. "Those incentive compensation payouts go down into plant level supervision," says Anton. "It’s driven fairly deep into the organization."

Do pockets of resistance linger?

"Because we’re an organization that likes to deliver on commitments, if you’re a plant manager and have an environmental target, and you know the technology as deployed today wouldn’t allow you to get to that target, you’re uncomfortable stepping up for it," says Anton. "That’s when you have to pull on that innovation to get there. Some get there easier than others."

While many sustainability programs are loaded with bells and whistles, it’s the "blocking and tackling" in areas such as energy efficiency that can yield immediate and meaningful results, as projects saving $50,000 here and $100,000 there add up.

This spring Alcoa hosted about 80 if its energy-efficiency leaders from around the world at Oak Ridge Laboratory in Tennessee, where they exchanged ideas with customers from such companies as Nissan and Ball Corp.

"People who do this are the most motivated people you’re ever going to run into," says Anton. "In 2010, measured against 2008, we saved $100 million on reduced energy. So there’s really, really significant money available there, and it’s a quest that never ends."

Anton says water-related efforts are catching up to the company’s efforts with energy and emissions, citing an ongoing project at Alcoa’s Cleveland plant, and another at its smelter in Bellingham, Wash., that has saved on the order of 1 million gallons per day thanks to switching from water-cooled to air-cooled compressors. Wireless metering, he says, is the next great opportunity.

The company in 2010 initiated supplier sustainability pilot programs in Canada and Latin America, and plans to implement a global program in 2011.

"We’re going to go after probably the top 150 or so suppliers," says Anton, initiating dialogue, making sure sustainability is on their radar screen, getting a better picture of those suppliers’ footprints and processing methods, and collecting data according to existing Global Reporting Initiative standards (the most popular tool for sustainability reporting).

"We use it also as a way to assess risk," says Anton: "We’ll come across some that don’t have sustainability on their radar screen, which will tell us that’s a high-risk supplier. That will work its way into our sourcing." Between those top 150 and all the company’s energy suppliers, the supplier program will cover approximately 80 percent of Alcoa’s spend, says Anton.

The Cradle Will Rock

Another area Alcoa points to with growing pride is redevelopment of its former sites. The former home of a smelter in Troutdale, Ore., in April won the Phoenix Award from the U.S. EPA as the best brownfield redevelopment project in the nation, and is now home to a major distribution center for FedEx Ground that opened in October 2010 and employs 800.

The company’s cradle-to-cradle efforts include products for commercial building exteriors and for electronics. To further close the sustainability loop, Alcoa recently took a 10-percent stake in Electronic Recyclers International (ERI), the largest electronic waste recycler in North America. A project announced in May closes the loop entirely, as ERI announced it would open a regional recycling hub in Badin, N.C., in the Badin Business Park, located at the site of a former Alcoa aluminum smelting plant.

Alcoa, which has been actively recruiting businesses to the Badin site, first contacted ERI in December 2010 during the company’s search for a Southeast recycling center. It considered locations in Georgia, Tennessee and South Carolina. The facility is expected to bring up to 200 jobs to the community. ERI is investing $5 million in the facility, and Alcoa is spending an additional $5 million on building improvements. After ERI moves into its new property in 2012, the park will have 535,000 sq. ft. (49,702 sq. m.) of industrial space and 50 acres (20 hectares) available for development.

"When we come to town, we’re usually the largest employer, particularly with smelters," says Anton, who serves as Alcoa’s representative on ERI’s board. "The impact we have on communities can be huge. Often the communities grow up around us. Other times, they basically remain small towns. That’s the case in North Carolina. When we took the decision to close the smelter there last March, we recognized we have to do some economic development there — we owe it to the community to not just leave an empty lot there. We’re working actively to recruit new business to the town.

"This whole idea of cradle to cradle on industrial sites is important," says Anton. "Alcoa is going to show some real industry leadership on that — and we’ll have sites available around the world." 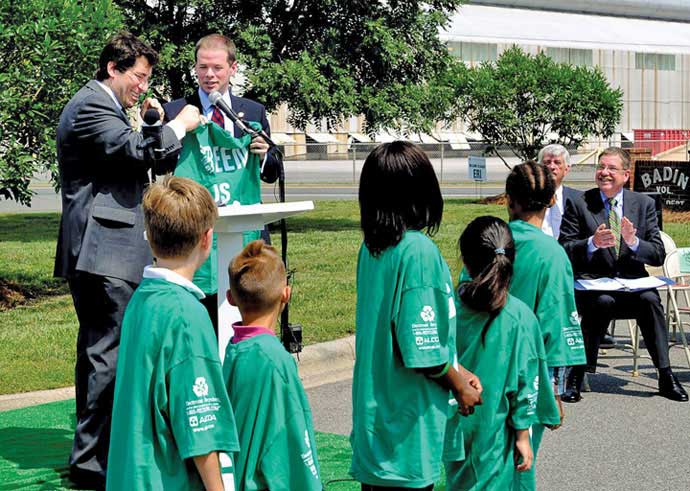 Kevin Anton in May celebrates with local, state and company officials and schoolchildren at the announcement of a new facility from Electronic Recyclers International in Badin Business Park, located on a former Alcoa smelter site in North Carolina.
Photo courtesy of Alcoa