Dollar General’s new distribution center in Bessemer, Ala. (rendering above), will be its 10th in the nation. Though all 10 are in the eastern half of the U.S., the company is beginning to locate stores in the West, including California in 2012.
I

n early June, FEMA announced that more than 4.3 million cubic yards of debris had thus far been removed in Alabama in the wake of the deadly tornadoes that swept through in late April, nearly half of the estimated 10 million cubic yards created by the storms. But some building materials in 'Bama are still going up instead of being gathered up. Construction continues on Dollar General's 10th U.S. distribution center in Bessemer, part of the Birmingham metro area. The 1-million-sq.-ft. (92,900-sq.-m.) facility, announced in early spring, will be located on a 106-acre (43-hectare) site and will eventually employ 650 people.

"Dollar General stores have been a part of the Birmingham community for four decades," said John Flanigan, executive vice president of global supply chain, in March, calling the location a "great strategic fit for our company's expansion plans."

Dollar General currently operates 498 stores in Alabama alone, among more than 9,500 located in 35 states, which in fiscal 2010 generated $13 billion in sales. In early May the company, based in Goodlettsville, Tenn., along I-65 north of Nashville, donated $100,000 to the American Red Cross to help communities devastated by the tornadoes.

In its June first-quarter earnings statement, Dollar General said it plans to open approximately 625 new stores and to remodel or relocate a total of approximately 550 stores in 2011.

A May release from Clayco, which is building the facility, said the center would serve 1,100 stores. Dollar General in June said it plans to spend approximately 25 percent of its planned 2011 capital expenditure of between $550 million and $600 million on special projects such as the new DC, which the company said would now be receiving a $90-million investment instead of the originally announced $60 million.

When Clayco announced its selection as the contractor on the project on April 19, one week before the tornadoes, it said the facility would be fast-tracked for completion by March 2012. One day after an official groundbreaking ceremony was held on June 8, a Clayco spokesperson confirmed that the project is sticking to that timetable.

"The immediate impact was a lot of the initial subcontractors were regrouping and seeing what they could do to assist in the Tuscaloosa area," says Dave Moses, executive vice president and partner at Clayco. Other than that, he says, "The weather did not have a significant impact on our work." ew York-based KLG Advisors in May released a report detailing top U.S. metro areas for acquiring and retaining IT talent. After excluding 11 “ultra high-cost” IT markets such as New York, L.A., Chicago and Seattle, KLG next looked at only those metros with at least 20,000 IT workers. The resulting 27 metros were then evaluated against factors including concentration of IT talent as percentage of total work force; growth of the IT labor force; and university and college IT graduate output. At right are the results.

Continental Lift
The rubber meets the road in southern Illinois.

Continental Tire has been a southern Illinois mainstay for 35 years. Its new investment further cements the German company’s commitment to the site, and will boost employment in Mt. Vernon to more than 3,000.
Take it to the Limit

Illinois played an historical role in the Interstate highway system's development thanks to a several test track loops constructed in the early 1950s. Continental Tire needs testing grounds too, but has chosen Uvalde, Texas, a crossroads of sorts itself just west of San Antonio. It's not exactly near much else, however, which is all well and good for a proving grounds where tires must be tested to their very limits. 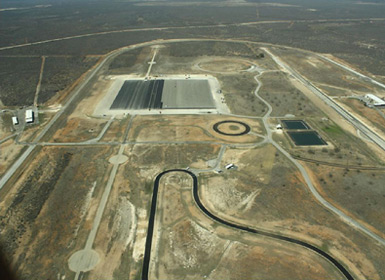 llinois, with 2,170 miles (3,492 km.) of Interstate highways, ranks third in the nation in such miles, behind only Texas and California. Thirty-seven thousand daily Interstate highway travelers through a certain swath of southern Illinois know Mt. Vernon as that brief stretch of Interstate where east-west I-64 and north-south I-57 converge. That's 148,000 tires rolling through per day — thousands more when you make allowances for big rigs.

Tire tallies on the roads and on the assembly line soon will be increasing in Mt. Vernon thanks to the May announcement that Continental Tire the Americas (CTA) will invest US$224 million in the expansion of its tire plant there, where it's been located for 35 years. Gabriel Sanders, deputy director of the Office of Business Development at the Illinois Dept. of Commerce and Economic Opportunity, says Illinois beat out an existing Continental site in San Luis Potosi, Mexico, and a greenfield option in Indiana for the investment.

The new project will create 444 new jobs over the next five years, as the Germany-based company increases overall production capacity by four million car and light truck tires annually.

The week before the announcement, Senate Bill 4 was signed into law by Gov. Pat Quinn early in the state legislative session. The measure's passage proved to be the linchpin securing the deal. It allows qualifying companies to apply their Economic Development for a Growing Economy (EDGE) tax credit against either the company's annual withholding tax liability or their annual corporate income tax liability.

"Today's announcement would not have been possible without the support of the state of Illinois," said Nikolai Setzer, head of Continental's passenger & light truck tire division and member of the executive board of Continental AG. "Adding production capacity to meet this regional demand was absolutely essential as part of our global growth strategy. This business growth is highlighted by a double-digit increase in total volume for the Americas region over the past two years." In March 2011, CTA announced a $210-million investment to expand production capacity at its plant in Camaçari, Bahia, Brazil, creating 400 new jobs and doubling capacity to more than eight million tires per year.

The biggest corporate presence in southern Illinois, Continental has invested more than $486 million in Mt. Vernon since 2006, adding 430 jobs in the process to bring the site's total work force to 2,588. Sanders says the company first talked to his DCEO team in September, followed by more precise talks about other options on the table.

"We were trying to close a gap in the cost differential presented to the company by the different locations," says Sanders, describing how the company's analysis, like most, sought to balance initial capital outlays and long-term operational costs. The project helps the state fight the public-perception battle that's unfolded since early January when the legislature boosted individual income tax rates to 5 percent from 3 percent and raised the corporate income tax to 9.5 percent from 7.3 percent.

"Tax is very important, but it's not everything," says Sanders, noting massive recent investments from Navistar, Motorola and Chrysler, among others. "They feel comfortable putting their hundreds of millions of dollars into this state. That says everything, really."

In addition to its Interstate overlap and central location, Mt. Vernon also is a point of convergence for three Class I railroads. Mary Ellen Bechtel, executive director of the Jefferson County Development Corp., says area infrastructure is only getting better. CTA will be seeing a new entrance road built to separate employee traffic from deliveries and shipments, as well as a new rail spur. And the company has worked with nearby Rend Lake College to establish "Conti University," allowing employees and their families to take college classes for credit right on site. Other area improvements include two major hospital expansions and a referendum passed in April giving the go-ahead to construct a new high school.

Last but not least, plans are in motion to expand the nearby stretch of I-57 from Mount Vernon south to Marion to six lanes within the next five years.