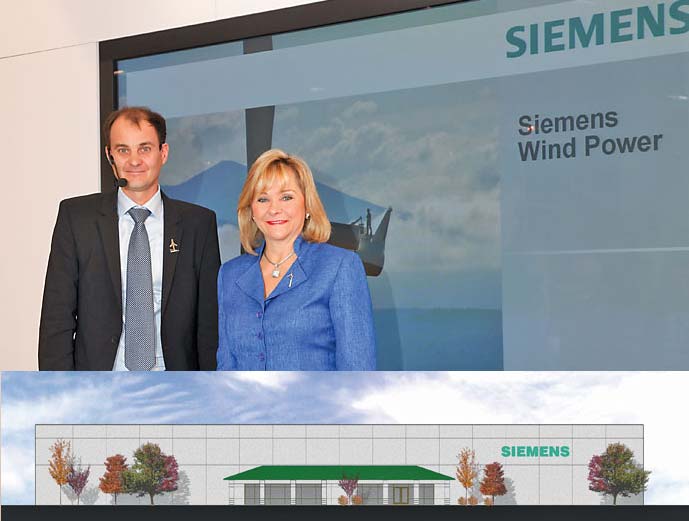 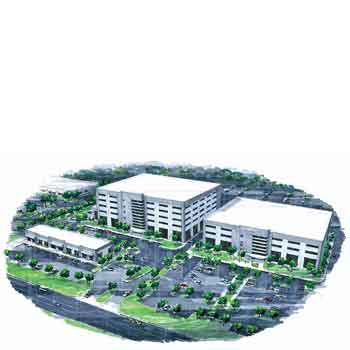 ind farms sprouting up across western Oklahoma and Texas drew Siemens Renewable Services to pick Woodward, Okla., for a major wind turbine parts distribution center. Construction of two buildings totaling 64,000 sq. ft. (5,945 sq. m.) began in late May. It will be the company’s largest wind warehouse in the U.S. and will support 24 wind farms when it opens later this year, a number which will grow to 30 in 2012.

Siemens is actively involved in wind projects across Oklahoma. The company provided 44 wind turbines to Oklahoma Gas & Electric and the University of Oklahoma for the OU Spirit wind farm located near Woodward, which was commissioned in 2010. The university has a goal of using 100 percent renewable energy by 2013. Siemens also supplied 66 turbines to CPV Renewable Energy Company’s Keenan II wind farm, located near Keenan, in 2010 and Keenan I wind farm in 2008. Siemens is also providing 95 wind turbines for OG&E’s Crossroads wind farm in Dewey County.

"We looked at our locations, a good chunk of which are in west Texas and Oklahoma, and we looked at where our future locations will be, such as New Mexico," says Tim Holt, CEO, Siemens Renewable Services. "You can draw a circle of where you would put that facility to reach all the wind farms in a given time in a cost-efficient way. Secondly, we looked at the different communities and incentives that were offered. So, it was a mix of best location and what was offered."

Holt says Siemens’ search began with about 15 sites and was quickly narrowed to three or four. He says the search was done in-house through Siemens Real Estate, which will own the property and lease back to Siemens Renewable Services. The nearest Siemens wind manufacturing site is the new nacelle production site in Hutchinson, Kan., about 190 miles (306 km.) northeast, but that wasn’t a consideration in the selection of Woodward.

"This will be a service site and will have a little different profile," Holt says. "It doesn’t necessarily have to be close to manufacturing. We wanted to be close to customers and installations. We will be handling a lot of smaller parts such as circuit boards and nuts and bolts."

Holt says Siemens worked with the Woodward Industrial Foundation and, toward the end of the process, with Gov. Mary Fallin and the Oklahoma Dept. of Commerce. "Overall, the investment in this facility is a little over $3 million, and a good chunk of it comes from incentives," Holt says.

The facility will begin operations in October or November with about 15 employees, and will ramp up to 40 over the next few years. Holt says Siemens’ North America wind business is thriving with more than 4,600 wind turbines installed or on order.

"Our growth globally is projected at 30 percent year on year over the next three years," Holt says. "The U.S. might be slightly higher. That’s the gross aspiration. Right now in the U.S., we have roughly 4,200 megawatts installed. Most of the service work we do is on projects sold a year or a year and a half ago. It’s a long-term stable business."

Attracting engineers in sufficient numbers has been a key to the growth of Oklahoma’s aerospace sector, which now accounts for about 10 percent of the state’s economy. The state moved to keep that pipeline flowing in April when Gov. Mary Fallin signed a law re-establishing tax credits for engineers going to work for Oklahoma companies as well as for the companies that hire them.

The bill restores a tax incentive that was put on moratorium last year by the Oklahoma state legislature. The legislation extends tax credits of $5,000 a year for up to five years to engineers who are hired in Oklahoma. The companies hiring the engineers will receive a tax credit equal to 10 percent of the compensation paid to an engineer during the first five years of employment if the engineer graduated from an Oklahoma college. If the engineer graduated from a college outside Oklahoma, the tax credit is 5 percent.

"With Oklahoma having a much lower unemployment rate than most of the nation [5.6 percent], it makes sure our work force is focused on key areas like aerospace," says Dave Lopez, Oklahoma’s Commerce Secretary.

Lopez also notes that the Legislature approved a quick-action closing fund for the governor to use in competing for large projects. However, it was not funded.

"The structure is there, and hopefully it will be funded as the economy improves," Lopez says.

Oklahoma is home to more than 300 aerospace companies, and another 200 companies that support aerospace/aviation. The industry employs more than 145,000 people, representing more than $12 billion in industrial output and $60.6 million in state sales tax revenue annually. Lopez says Oklahoma has many advantages that bode well for the continued rise of the state’s aerospace sector.

"Oklahoma has some unique assets in unmanned aerial vehicles, and that’s a growth opportunity for applications for both military and commercial applications," Lopez says. "There is design going on at Fort Sill, which has a testing runway. Oklahoma City is also home for the FAA’s training center. One day, Oklahoma might be the UAV capital of the U.S."

The state has an array of ongoing aerospace projects, such as Boeing’s six-story, 320,000-sq.-ft. (29,728-sq.-m.) building in Oklahoma City that will be home to the Boeing B-1 bomber program and C-130 Avionics Modernization Program, both of which are transitioning to Oklahoma. Boeing broke ground on the project in April.

In early June, Boeing became the first participant accepted into the state’s new PrimeWIN program, an incentive program that’s part of the Oklahoma Quality Jobs Program and is designed to match qualified Oklahoma subcontractors with federal prime contractors. The PrimeWIN Contractor Incentive Program provides both a cash benefit and a qualified subcontractor base for primes. It offers prime contractors a cash rebate of up to 2 percent of the Oklahoma work force qualified labor costs. The cash incentives are paid quarterly for a maximum of 10 years by the Oklahoma Tax Commission.

FlightSafety International plans to dedicate its new flight training system production facility in Broken Arrow in August. The company says it will create more than 300 jobs at the 340,000-sq.-ft. (31,586-sq.-m.) facility over the next few years. FlightSafety, which has been operating in Oklahoma since 1978, designs and produces sophisticated flight simulators used to train business, commercial and military aviators. 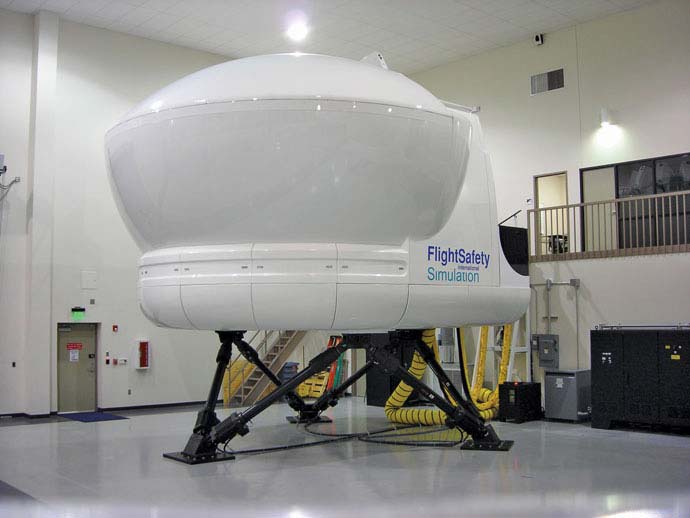 Flight Safety International will build flight simulators at its new facility in Broken Arrow.
Photo courtesy of the Oklahoma Dept. of Commerce