A publishing giant’s move puts the World Trade Center site back in vogue. 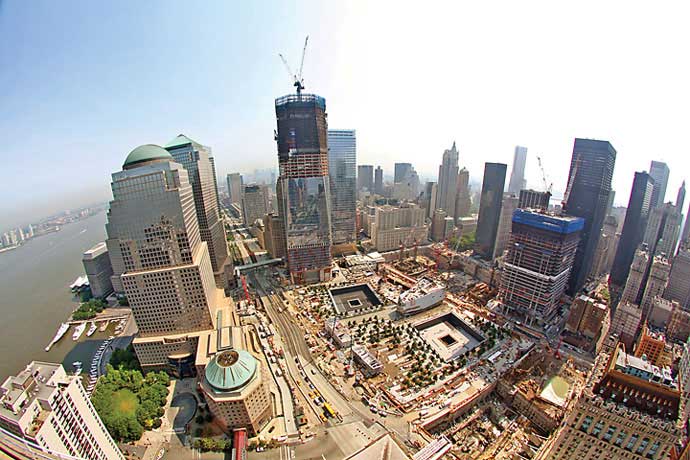 As it reached two-thirds of its eventual height of 104 stories, One World Trade Center (center, with mirrored glass façade) welcomed a lease and relocation from Condé Nast.
Photo courtesy of Port Authority of New York and New Jersey
by ADAM BRUNS

A June 2010 "Talk of the Town" piece by New Yorker journalist Lauren Collins described how the One World Trade Center building had reached the 20th floor in May, and how its builders hoped to rise by a floor every 10 days until they reached the planned 104 stories. She also mentioned that her parent company was looking the place over.

More New Yorker stories now will be penned in the building itself, after executives from parent Condé Nast stood on the 34th floor just before Memorial Day earlier this year and signed a lease worth approximately US$1.9 billion with the Port Authority of New York and New Jersey to occupy one-third of what eventually will be the nation's tallest building, part of the 16-acre (6.5-hectare) World Trade Center site owned by the authority. The 20th floor Collins reported from a year earlier is the first floor of the swath of 1,046,262 sq. ft. (97,198 sq. m.) Condé Nast will take possession of in 2014, going up through the 41st floor, for the next 25 years.

The deal is the largest lease in Lower Manhattan in more than 25 years and the biggest move ever from Midtown to Downtown.

On the same day as the lease signing, the Port Authority Board finalized an agreement with The Durst Organization for an equity membership in One World Trade Center, after having reached a tentative agreement last August. Durst will make a minimum equity investment of $100 million for its membership interest, and will take on primary responsibility for tenant fit-out, leasing and property management. Durst also will be looking for a new tenant for the Four Times Square building that Condé Nast is leaving, while the Port Authority will pony up for the remaining five years of that Times Square lease.

As of the signing date, the construction schedule at One World Trade Center had outpaced last year's projections and reached the 66th floor level, rising at a rate of one floor per week. The structure, designed by architect David Childs of Skidmore, Owings and Merrill, is scheduled to be completed at the end of 2013, with 3 million sq. ft. (278,700 sq. m.) of office space and a LEED-Gold rating.

Getting In and Out

Condé Nast's 22 floors of space will house the publishing giant's global headquarters and its 18 magazines, 27 Web sites and other affiliated business - more than 3,000 staff members in all.

Port Authority leaders said the signing "validates the turnaround at the World Trade Center site" instigated in 2008 with the arrival of Chris Ward as executive director at the Authority. They also expressed hope that Condé Nast's arrival would trigger the same kind of development renaissance downtown that the publisher's 1999 arrival at the 48-story Four Times Square building sparked in that neighborhood. The governors of New York and New Jersey, New York Mayor Michael Bloomberg and a host of government officials and real estate pros all praised the deal as a validation for downtown as a thriving corporate destination for sectors beyond finance, as well as a place for those companies' people to live.

"Condé Nast has a long history in New York and has thrived in part due to the city's indefatigable energy, power and vitality," said S. I. Newhouse, Jr., chairman of Condé Nast. "We are proud to be taking part in the revitalization of Lower Manhattan."

A feature central to construction headaches was also central to the deal: The WTC Transportation Hub, scheduled for completion underneath the structure by 2014, will offer the highest concentration of mass transit in the city, serving hundreds of thousands of passenger per day.

"It's certainly a complicated site, but we worked through those issues," said Gregory Tosko, vice chairman of the New York Tri-State Region for CB Richard Ellis, during a post-announcement press conference. Tosko and his CBRE colleagues Mary Ann Tighe, CEO, and Ramneek K. Rikhy, senior associate, represented Condé Nast in the deal - just as CBRE did 12 years ago in the move to Times Square. Condé Nast CFO and COO John Bellando helmed the company's analysis along with Bob Bennis, the company's managing director of real estate.

"The issue of access to the site was really one of the main focuses of the negotiations, and Gregory and I feel confident it's solved," said Tighe.

Also on the team finalizing the lease were Philippe Visser, director of World Trade Center redevelopment for the Port Authority, and Tara Stacom and Alan Stein of Cushman & Wakefield. Visser affirms that the transit hub was of primary importance.

"A huge percentage of the Condé Nast population takes the subway to work, and also lives in the five boroughs," he says. "One of the big selling points was coming through this magnificent architectural wonder of the Calatrava-designed transportation hub." The company closely analyzed commuting patterns and the travel paths its employees would follow, and how a planned underground concourse could best accommodate those staff members' needs. "That was something we had to work out with Condé Nast over the course of negotiations," says Visser.

Above ground, structures and people are literally looking up in every direction.

"The curtain wall is at about floor 38, and you can really see it visibly on the skyline now from all points around New York City," says Visser, who came to the Authority from Tishman Speyer two and a half years ago after previous work on large-scale development projects with such firms as Vornado Realty Trust and Forest City Ratner. "Every acre of the site is under construction, which is the first time since 9/11 that that's taken place. Tower 2 will be built to grade. The transit hub is under construction - the trusses that will hold up the roof are being installed. And Tower 4 is really starting to move too."

Among 15 critical issues that the Port Authority identified and has addressed in the past 30 months were completion of the 9/11 memorial monument and plaza by the 10th anniversary (not on track then, but on track now) and integrating construction schedules so that all components of site redevelopment could advance more smoothly. For instance, says Visser, the decision was made to work top-down instead of bottom-up on the transportation hub, building its roof first so that the memorial and plaza could be finished.

In addition to simply tightening up schedule and budget rigor, he says, momentum also came in the wake of a foundational deal reached in March 2010 between the Port Authority and developer Silverstein Properties after several years of rising acrimony and a descending economy. The agreement calls for the Port Authority to provide backstop financing for Silverstein's first tower in the area known as the "east bathtub," and for the city and state together to provide limited backstop financing for Silverstein's second tower if it hits certain private-market triggers.

First In Line
Overshadowed figuratively, if not literally, by the announcement was the building's first tenant, China Center New York LLC, a division of Vantone Industrial Co., Ltd., which signed a 190,810-sq.-ft. (17,726-sq.-m.) lease in May 2009 for portions of the 64th floor and the entire 65th through 69th floors. The China Center's mission, expected to get fully under way by 2013, is to provide upscale event and business spaces for high-profile Chinese and international companies.

In April the organization unveiled its "folding garden" interior design concept. "Once in place, the vertical Chinese garden folding through 64th to 69th floors [will] provide an extraordinary space for Chinese and U.S. business leaders to build relationships and provide a dramatic showcase for the rise of modern China," said the China Center, which is aiming for LEED-Platinum certification of its space. That same month, Mayor Bloomberg joined the Partnership for New York City in welcoming more than 50 top Chinese CEOs to New York for the second annual China-U.S. Business Leaders Roundtable, held at the New York Stock Exchange, where 68 Chinese companies are listed. Several also have headquarters in the Big Apple.

China Center spokesperson Yan Tai says the center's core team of 10 currently works with an extended team of another dozen across such fields as legal, design and accounting. She says hiring might reach 100 as the organization gets rolling over the next year or two, though how much of that hiring will be outsourced is still under discussion.

China Center originally had signed up seven years ago to be a tenant at Seven World Trade Center, before that deal fell through. In a statement, China Center President Xue Ya said Condé Nast's lease would boost high-end corporate interest in the building, and that "together, China Center and Condé Nast already help make the building even more iconic."

Reached by phone, Xue says inquiries from the Chinese private sector are on the upswing, including from companies in the life sciences, pharmaceuticals, automotive and now consumer-product sectors. She says her organization has always looked first to downtown over midtown.

That sentiment is echoed by Visser, recalling that a number of Asian financial institutions were among occupants of the original World Trade Center.

"And other companies liked the symbolism of the World Trade Center site," he says. "It was a great place for them to land in New York City and in the U.S. We are excited about continuing that great relationship. I'd expect there would be even more interest to come."

So as the completion of the 9/11 memorial approached along with the 10th anniversary of the twin towers' destruction, this year's Memorial Day was all about looking forward:

"You need somebody to go first," said CBRE's Mary Ann Tighe of the pioneering move. "Condé Nast prides itself on being a forward-looking company. They apply that culture in their real estate as well."

"What the lease means is that I think the World Trade Center has become the really sound choice for corporate real estate executives to look at to put office and headquarters space," says Visser. "That's happening now. With security, operational flexibility and certainly large blocks of space, the World Trade Center has become a sound bet. If you think about where it was three years ago, before the assessment, I don't think anyone would have said that then."

"We built a new reality at the World Trade Center," Ward said at the signing, "and this transaction will be the exclamation point on that turnaround."

More exclamations could soon follow: Negotiations continue on a possible lease at One World Trade Center by the U.S. General Services Administration. And in early June, Swiss banking firm UBS was considering moving its trading floor operation to Silverstein's Three World Trade Center from its 700,000-sq.-ft. (65,030-sq.-m.) edifice in Stamford, Conn., where UBS moved in the 1990s from New York City. 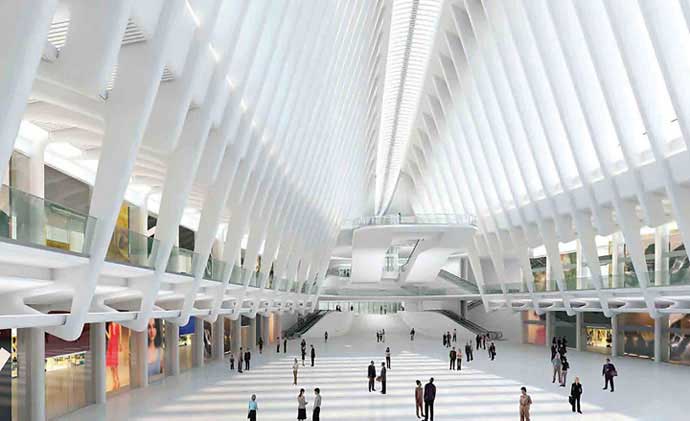 Construction progress and ease of use in a new $3.4-billion transportation hub, designed by Santiago Calatrava, were central to Condé Nast’s analysis of the World Trade Center site.
Image courtesy of Port Authority of New York and New Jersey