Research Pacts:
A New Twist on the
Public-Private Partnership 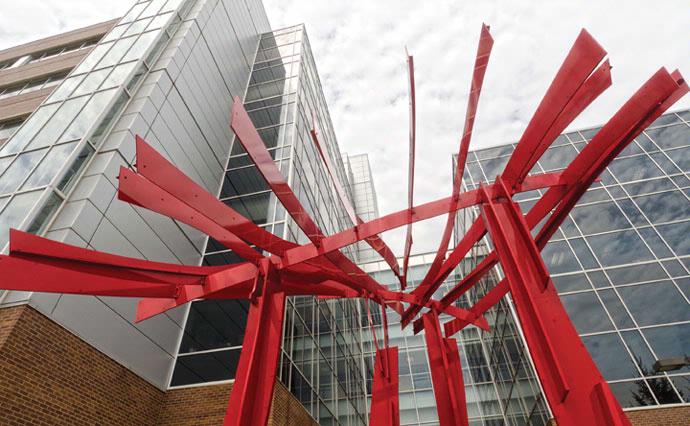 rocter & Gamble has expanded the scope of its university research collaboration program beyond Ohio's borders to neighboring Michigan. In February, Michigan's University Research Corridor (URC) — a consortium of Michigan State University (whose Chemistry Building appears below and on this issue's cover), the University of Michigan and Wayne State University — signed a master research agreement with P&G that has since expanded to include 10 more public universities in the state.

The agreement adds horsepower to URC's role as a driver of economic activity in southern Michigan. URC Executive Director Jeff Mason explains: "We don't see ourselves at the University Research Corridor in the economic development business, but we do see ourselves and the three world-class research universities that make up the URC as economic engines. Our focus is on collaborating with local, regional, and state economic development entities to leverage the strengths of these institutions to benefit the state's economy." Now URC can add private enterprise to that list of collaborators.

Michigan State University got a taste of corporate collaboration in January 2009, when IBM announced it would locate its Global Delivery Center for Application Services on its campus. The IBM facility, the first of its kind for the company in the United States, is the product of an agreement with the school to expand MSU's recruiting, research, and educational partnerships with the information technology giant, which located similar projects in Columbia, Mo., and Dubuque, Iowa, within the past two years, and identified higher education resources as a chief criterion in those projects' locations as well.

"The partnership leverages multiple assets across the university system, including engineering and computer science, business and also social science," says URC's Mason. "These activities include customized training and work-force programs, direct faculty interaction, as well as research and development collaborations." The project expects to create up to 1,500 direct and indirect jobs by 2014.

Meanwhile, P&G is bringing a fresh approach to the world of corporate product research, giving select university systems the opportunity to work directly with a consumer-products powerhouse in the product research, development and commercialization process where all parties involved benefit, including the regions in which the research is conducted.

In April 2010, the Ohio Board of Regents, which oversees the University System of Ohio's 14 public universities, signed a similar research agreement with the Cincinnati-based conglomerate that, in essence, simplifies the legal process that companies and universities use to negotiate research projects, allowing innovative ideas to come to fruition faster. The agreement addresses most of the factors pertinent to university-based research, including intellectual property rights, publication of research and licensing structures.

"For the first time, with just one agreement, we are unleashing the collective power of Ohio's universities to help turn ideas into products, and products into jobs," said then-Gov. Ted Strickland at the signing ceremony. "This agreement generates positive impacts for everyone involved — P&G is able to take advantage of Ohio's most creative research minds, and our universities get to collaborate with P&G on new products." The statewide agreement is based on a master agreement between P&G and the University of Cincinnati that was created in 2005.

Michigan Gov. Rick Snyder put the significance of the 2011 pact in his state this way in his February 2011 State of the State Address: "It's groundbreaking. It's a collaboration that will speed innovative ideas to the marketplace by simplifying the legal process companies and universities use to negotiate research projects."

P&G is forging similar agreements outside the U.S., as well. In September 2010, the company entered into a three-year Master Research Collaborative Agreement (MRCA) with the Singapore Government's Agency for Science, Technology and Research (A*STAR) that builds on a previous agreement the two formed in 2006. The MRCA sets the stage for more cutting-edge market innovations, according to A*STAR. The initial focus of the collaborative research will be on developing Transformative Platform Technologies (TPT) for chemicals, bio, smart products and packaging, as well as process development, to aid new product development for a wide range of product categories in which P&G is active, particularly consumer care.

When complete in 2013, P&G's new Innovation Center in Singapore will be home to much of the A*STAR-P&G research. The MRCA will also provide P&G with access to research services and facilities at Singapore's research hub — Biopolis and Fusionopolis.

"In Europe, we're looking at universities in the United Kingdom and research institutes in Germany," says Nikolaides. "In Asia, in addition to the A*STAR agreement, we're looking to identify partners in China. It's important that we know the lay of the land with universities in those regions in terms of knowing the consumers and also with respect to the students. It's critical in our mission and those of the universities to give students opportunities to work on real-life problems that collaboration with industry can provide. And there is correlation between doing research at a university and recruiting and hiring from that university. Everybody wins — the students, the university and the industrial partner."

So do East Lansing, Ann Arbor and Detroit (home to Michigan State, University of Michigan and Wayne State University, respectively) and the regions that are home to the other public universities in the Wolverine State's agreement with P&G — and the Ohio university towns, too.

"Bringing research out of the laboratory and into the commercial marketplace is very difficult for universities to do on their own," says Nikolaides. "That's why industrial partnerships are absolutely critical. P&G would be very interested in helping a professor at a university who is working on, say, particle and fiber manipulation — non-wovens technology, such as what goes into a Pampers diaper — to determine sustainable materials that reduce dependence on petroleum products. We might provide financial or in-kind support, perspective and coaching, to commercialize something. That professor now has a viable start-up opportunity."

Communities are eager to attract those start-ups and help cultivate them into new, growing businesses. "An industrial partner helps mitigate the risk associated with the translational research stage," says Nikolaides. "You have a thriving incubation environment now, which will attract venture capitalists looking to invest in good opportunities. If an enterprise catches fire, you have jobs and a tax base. Everyone's happy. The trick is hitting the right chord of how universities and private industries work to maximize that effect."