Davidson County, N.C., surpasses all micropolitan
areas in the U.S. in corporate real estate projects in 2010. 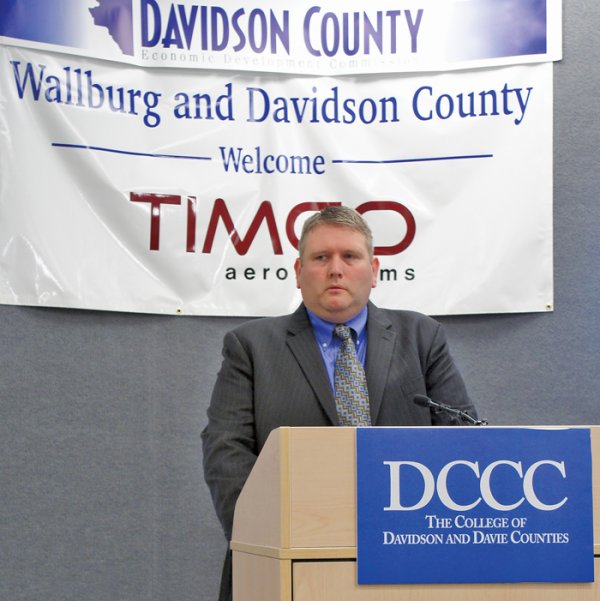 TIMCO Aviation Services CEO, CFO and CAO Kevin Carter announced in 2010 that his firm would invest $5 million in a 500-job manufacturing plant in Wallburg, N.C., in Davidson County.
by RON STARNER
A

community that made its fortune making furniture for the world is now the No. 1 small town in America when it comes to corporate facility expansion projects.

The Davidson County community in the Piedmont Triad region of Central North Carolina easily outdistanced runner-up micro Statesville-Mooresville, N.C., which had 17 projects in 2010. Filling out the top five were Seneca, S.C., with 13 projects, and Wooster, Ohio; and Lancaster, S.C., which each had 11.

"We have a very aggressive community when it comes to business recruitment, retention and incentives," says Steve Googe, executive director of the Davidson County Economic Development Commission. "Our elected officials all clearly understand the importance of incentives and have been very aggressive in pursuing company projects. We go after small and medium-sized projects, and that in turn has brought some of the larger projects to us." 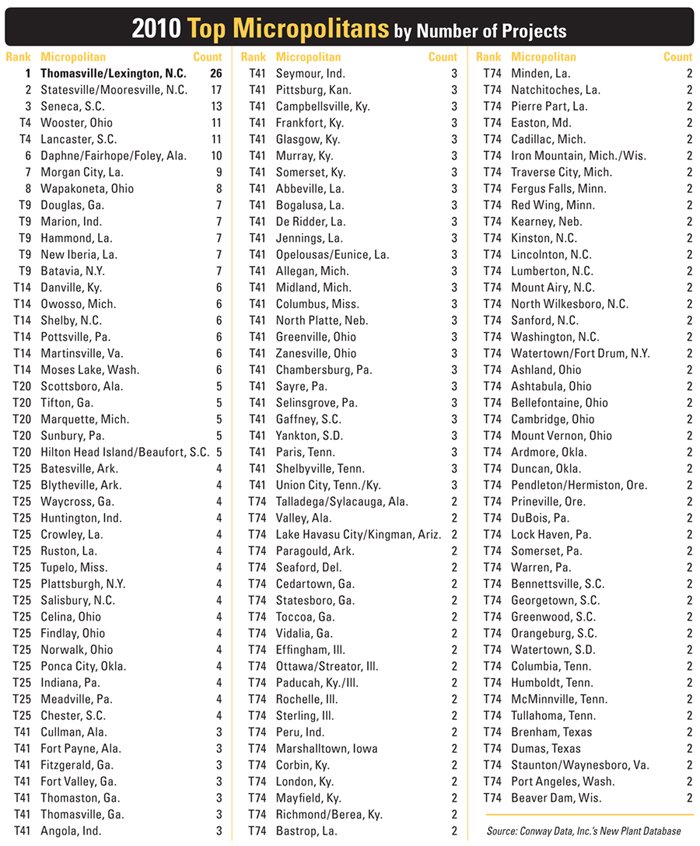 Googe met Kip Blakely, vice president of sales and marketing for TIMCO, while attending the Paris Air Show. "We attended a dinner hosted by Mr. Blakely and his wife while we were in Paris," says Googe. "There were probably 30 of us with the delegation from North Carolina. I thanked him for his hospitality and walked back to the hotel with him after dinner. He said they would start an East Coast seatback manufacturing operation and he didn't want to do it at the Greensboro airport where they are based. It's funny, but I had to travel all the way to Paris to meet a guy from Greensboro."

A move-in-ready building helped seal the deal, Blakely tells Site Selection. "We looked in two different countries, four states and six counties in North Carolina. Wallburg came to the top of the list of every metric we had," the TIMCO executive says.

"The most important factor in our site selection process was that we were very familiar with the work ethic of the people in the area," Blakely says. "We are in the business of making airline furniture, and we knew the people of this area knew furniture making very well."

A Place Suppliers Can Call Home

All TIMCO needed to finalize the deal was a facility. "We looked at distribution buildings throughout the region," says Blakely. "When we came across the Tyco building, we knew right away that it was a wonderful building that had the appearance of being over-engineered. We knew it would be easy to convert it into a manufacturing facility."

The plant is located on the borders of Davidson, Forsyth and Guilford counties and is only 15 minutes from TIMCO's corporate headquarters at the Piedmont Triad International Airport in Greensboro. The property consists of just under 70 acres (28 hectares).

"Our long-term plan is to put a business park on the site and encourage our suppliers to inventory their material there," says Blakely. "Our suppliers would be locating their own facilities within the park."

"The logistics of the Wallburg site was very important to us," adds Blakely. "Interstates 85, 40 and 77 are all within easy reach. In our business, the majority of the seats are delivered to air carriers outside the U.S. We will get four production lines up and running by the end of this year."

The company's familiarity and comfort level with North Carolina were critical. "We just celebrated our 20th anniversary in Greensboro last quarter," Blakely notes. "We have 1,800 employees in North Carolina out of our 3,500 throughout the U.S. The North Carolina incentives were very helpful. We used the One North Carolina Fund, the Job Development Investment Grant and the Golden LEAF Fund. In North Carolina, all you have to do is find a good economic developer and let them do their magic. For us, that was Steve Googe."

TIMCO is not alone. In 2010, 26 companies made the decision to expand in Davidson County, including sizable facility investments from Save-A-Lot Food Stores, United Furniture Industries and Windstream Communications. St. Louis-based grocery retailer Save-A-Lot announced a $24-million investment in a 328,000-sq.-ft. (30,471-sq.-m.) food distribution center that employs 42 people in Lexington.

"The Save-A-Lot deal involved what I call 'stick-to-it-ive-ness,' " says Googe. "I met them at our industrial park in Lexington in 2004 for the first time, and we worked on them ever since. The players changed along the way, but we persisted and got the deal done. We used a One North Carolina Fund grant and a Community Development Block Grant to fund construction of the project on 70 acres [28 hectares] in the Lexington Business Center at the intersection of Interstate 85 and Interstate 285. They will be operational in November of this year."

The distribution center will serve up to 200 stores in Northern Georgia, South Carolina, North Carolina and Southern Virginia. The company operates 1,200 stores nationwide.

L. Brett Chambless, partner with Lee & Associates in Atlanta, served as the site selection consultant for Save-A-Lot. "Our search covered a lot of territory," he says. "They did a logistics analysis to find the optimum mileage to their existing stores and their planned stores. It ended up being the Greensboro-Piedmont Triad area. We looked at sites within a 50-mile [81-km.] radius. The search included locations in Virginia, a large section of North Carolina, and the northern section of South Carolina."

There were many location factors that came into play, but "there was not one factor that was more valuable than the others," says Chambless. "It was the sum total. We were looking at available sites that had industrial zoning and had industrial utilities in place. We needed an attractive labor force, and Davidson County certainly has that. The labor environment is not volatile there, and workers can be hired at a reasonable wage level."

Chambless also credits the local government. "The city and the county were very involved in recruiting this company," he says. "That did lead to some incentives, but incentives typically don't make the deal ­— they just make the deal better."

Having dual-feed power to the site was essential, notes Chambless, because the build-to-suit facility will be a multi-temperature warehouse. "It will have a dry warehouse, a cooler section and a freezer section," he adds. "We will end up being a big consumer of electricity."

"If the economy just stays stable, we expect to be north of 270 employees by October 1 of this year or even faster than that," says Bob Cottam III, vice president of operations for Piedmont Risk Management and consultant for United Furniture. "I was in charge of site selection and the development process for United Furniture. We looked at work force, demographics, transportation and available buildings, and selected a handful of potential sites for the company."

The short list of sites was narrowed to High Point in Guilford County; the Madison-Eden area north of Greensboro; Martinsville, Va.; southwestern Pennsylvania; Siler City in Chatham County, N.C.; and two sites in the Lexington-Thomasville area.

"We ended up purchasing a 366,000-sq.-ft. [34,000-sq.-m.] plant in Lexington from Stanley Furniture," says Cottam. "Steve Googe had a lot to do with the selection process and leading us to this building. It has proven to be a very successful startup."

A few factors proved pivotal, says Cottam. "First of all, we had a comfort level with Steve Googe and the Davidson County establishment. Secondly, we really liked the work force. And thirdly, proximity to our existing operations and our vendor base in and around our plants in Randolph County meant that we could move anything back and forth in about half an hour."

Cottam notes that "logistics is a huge matter with us because we are a just-in-time manufacturing operation. We generally keep less than three days of raw material in queue. The ability to inter-plant transfer both raw material and finished goods has turned out to be a huge success in North Carolina.

"We also received outstanding support from North Carolina Commerce Secretary Keith Crisco. He was a participant early on in our process, and we received a lot of help from the Governor's Office too. The One North Carolina Fund was helpful, but the state and local incentives really have to be looked at as the icing on the cake. You have to make sure that everything fits into your business model."

"I find that the customers are very good to do business with in this area," says Stacy Hale, division vice president of operations for North and South Carolina for Windstream. "The work force is very open to the Windstream way and culture. We purchased a 100-year-old company, but they have enjoyed being part of a larger Fortune 500 company."

Scott Morris, director of communications for Windstream, says, "Our method of operation has always been to acquire very good companies. We look for operations that are very well run, and this fits our model very well."

Windstream provides broadband Internet, cable TV and telephone services. "We have numerous facilities in the Lexington area, but the network is the most important part of the acquisition," says Hale. "As part of the deal we acquired 9,000 high-speed Internet customers, 12,000 cable TV customers and 23,000 access lines."

Other significant investments in Davidson County in 2010 included a $173-million solar array by Sun Edison in Linwood and a $6-million manufacturing plant investment by Old Dominion Freight Lines in Thomasville.

Doug Croft, president of the Thomasville Chamber of Commerce, says that Old Dominion is a "very significant company in our community. They moved their headquarters here about 10 years ago from High Point, and they are one of the top trucking companies in the nation, if not the world."

Davidson County Community College played a key role in Old Dominion's expansion. "The company has been very engaged in our community college by starting a logistics curriculum and a trucking curriculum," Croft says. "They literally built a new building and a new program in truck transportation at the college. They have implemented technology to a degree that you cannot imagine."

Croft says location drives the county's success. "We are located at the center of the state, halfway between Charlotte and Raleigh, and halfway between Atlanta and Washington, D.C." he notes. "With direct access to the Eastern Seaboard, companies based here can reach half the nation in 24 hours or less."

Diversification helps. "Our traditional manufacturing was in furniture and textiles," Croft says. "We still have those industries; they are just smaller now. We are a transitioning community. In Thomasville, we are talking about it every single day — where we are going in the next 10 years. Our world changed. We are aware of it. We are not going to sit and wait and let others dictate what happens here. We have to create our own future."

A good example is the motorsports industry. "We have a small industrial park that has nothing in it but racing-related businesses," says Croft. "There is some manufacturing, some distribution, a racing team, etc. Racing hasn't replaced furniture and textiles, but it is absolutely an important part of our future. It is an incredibly clean and high-tech manufacturing industry. It was high-tech long before anyone realized it."

Xceldyne Technologies in Thomasville is one of those firms. "They make titanium valves for racing engines all over the world," Croft adds. "This is a firm that located here six years ago. Their products have zero defects, and they are constantly growing." 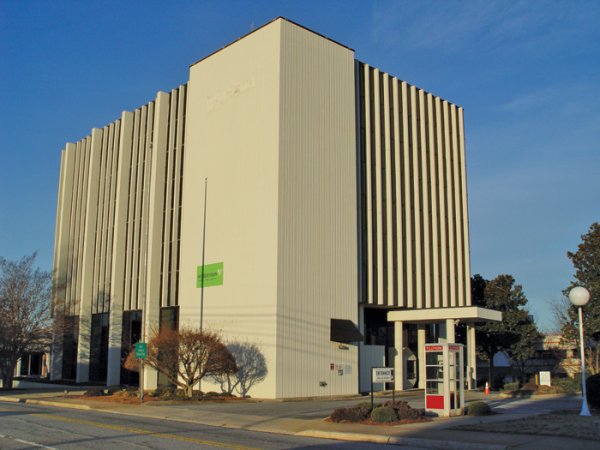 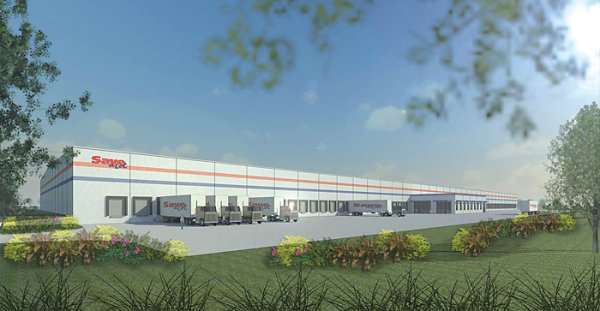 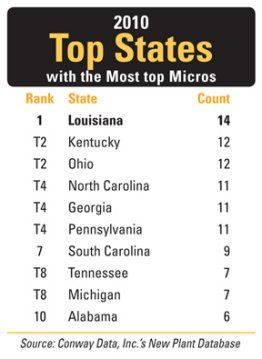