New aerospace and logistics developments at Amsterdam
Schiphol are adding to this airport city’s location credentials.

A rendering of the new General Aviation terminal at Schiphol East, scheduled to open in April 2011.
Image courtesy of Schiphol Area Development Co.
by MARK AREND
A

msterdam Airport Schiphol is considered the gold standard of 21st century airport cities, the one frequently cited as the paradigm by airport executives hoping to turn their own facilities into engines of regional economic growth. Well over 60,000 people work at nearly 70 businesses sited at or adjacent to Schiphol, from aerospace companies to air cargo and logistics specialists to global IT and financial services companies. Lodging, entertainment and other service-sector players are in ample supply, and educational institutions and R&D centers are close by. The Amsterdam city center is just nine miles (15 km.) away, but Schiphol bustles on its own, with the added advantage of runways and transportation links to points worldwide.

Two new development initiatives are now in the works that will deepen Schiphol's credentials as a center for aerospace-related commerce and logistics. Aerospace Exchange at Schiphol-East is a €20-million (US$27-million) plan to develop infrastructure "to optimize accessibility and give the area a true aerospace identity," says Paul ven den Brink, international marketing director at the Schiphol Area Development Co. The second is Amsterdam Connecting Trade (ACT), a new logistics hub with the 111-acre (45-hectare) Schiphol Logistics Park; the 420-acre (170-hectare) A4 Zone West area for logistics activities, marketing, showrooms and other facilities; and proximity to Schiphol SmartGate Cargo, a new public-private entity for facilitating cross-border movement of goods from points in Europe through Schiphol.

Several projects in the Aerospace Exchange development already are well under way. These include a new General Aviation (GA) Terminal for business- and private-jet passengers that is scheduled to open this year, and a new headquarters for Transavia.com, a low-cost airline subsidiary of Air France-KLM Group, and Martinair. The latter is the first LEED-Platinum certified office building in the Netherlands.

In April 2010, Bombardier Aerospace selected a site at Schiphol for its new European Service Centre, where it will perform MRO services for its European business-jet customers operating a combined fleet of more than 400 planes, including Bombardier's Learjet, Challenger and Global aircraft families. The facility will potentially grow to a work force of 170 by 2013. Bombardier, the third-largest civil aircraft manufacturer, signed a three-year contract with Martinair for the sublease of Hangar 4 (approximately 9,000 sq. m. or 97,000 sq. ft.) at Schiphol-East. In addition, it signed a letter of intent with Schiphol Real Estate (SRE) for the development of a custom-designed, dedicated Bombardier centre at Schiphol Aerospace Exchange (Schiphol-East), to be completed in 2012.

"After a long and thorough decision-making process, looking at 40 different airports in Europe, we have opted for Amsterdam Airport Schiphol as the European base for our customer service center," said Michael McQuay, president of Bombardier Aircraft Service Centres. "This new center will create an amazing customer experience giving us an additional advantage over our competitors."

Europe is Bombardier's second-largest market after North America, and the company expects continued growth there over the next five years. It will be in good company. "The development of Amsterdam Airport Schiphol as an airport and business location began in 1916, with the first-ever flight at Schiphol-East," says Maarten de Groof, executive vice president and chief commercial officer at Schiphol Group. "Today, under the name of Schiphol Aerospace Exchange, this area focuses on technology, knowledge, training and information. Schiphol-East is home to companies and training institutes in the civil aviation and aerospace industries, including aircraft and other maintenance business for companies such as KLM and Boeing."

ACT was formalized in June 2008 by local development agencies and Schiphol Group to make Amsterdam one of Europe's top three sustainable air cargo and logistics hubs. Specifically, the agreement calls for "a clever infrastructural design, an efficient and sustainable spatial set-up, a high quality of life, guaranteed diversity of people and activities, and a comprehensive range of logistics solutions."

Several logistics companies have taken the bait. On August 30, 2010, Rhenus Logistics assumed occupancy of a new freight facility in Schiphol Southeast, one of ACT's business parks, from Schiphol Real Estate. The building has about 81,000 sq. ft. (7,500 sq. m.) of operational space for first- and second-line transshipment activities and 30,000 sq. ft. (2,800 sq. m.) of office space.

Rhenus' new premises are part of its strategy to operate the entire air freight and handling process more efficiently and to cut costs. It was designed and built in response to the initiatives taken by Customs and Amsterdam Airport Schiphol aimed at operating the entire air-freight process according to the 'Green Lane' principle within three years.

Under this system, most incoming consignments and goods can be transshipped without delay, saving significant time and money. The new freight building will house the air freight forwarding activities of Rhenus Air, KDS Cargo, Racon Air and Copex Air. 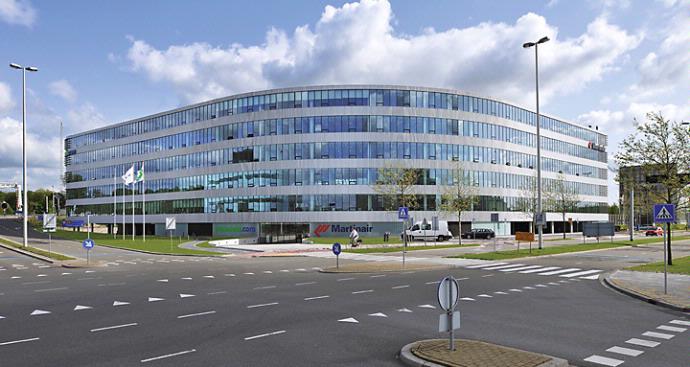 The new headquarters for Transavia.com and Martinair is the first LEED-Platinum certified office building in the Netherlands. The building is part of the Aerospace Exchange development at Amsterdam Schiphol Airport.
Image courtesy of Schiphol Area Development Co. 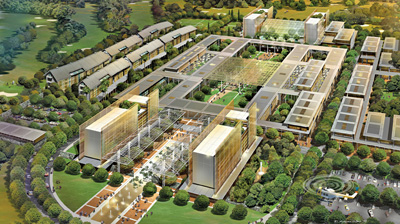 his world first integrated aviation university and training campus is being developed on a 50-acre (20-hectare) site in Bangalore, India, with satellite academies in New Delhi and Mumbai, the country's two largest aviation markets.

CAPA AeroPark is a US$125-million joint venture of Sydney-based Centre for Asia Pacific Aviation (CAPA) and Subramanya Construction & Development Company (SCDC), a Bangalore-based real estate developer. There are plans for further roll-out to other metro cities across India, South Asia and the Gulf.

CAPA AeroPark will offer a university and international standard academies for airline and airport management, pilots, engineers, air traffic controllers, cabin crew and regulators. Each academy will be developed in partnership with the leading global providers in their field.

The fully developed campus will include state-of-the-art academic facilities together with full flight simulators, a flying school, engineering workshops and laboratories, research centers, accommodation for students and faculty, recreational facilities, a hotel and convention center. CAPA AeroPark also has the potential to develop an adjacent aerospace technology and research park in Bangalore, to further enhance cooperation and exchange of knowledge between the facility and industry. 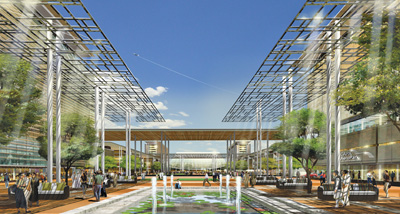 "We are excited to launch this new and vital concept in India to support the long term growth of the aviation sector. There is an emerging global shortage of skilled human resources in the industry, which is particularly acute in rapidly emerging markets such as India and neighboring regions. The aviation industries in India and the Gulf alone are expected to see investment of in excess of US$200 billion over the next decade and availability of skills is critical to support this," stated Mr. Peter Harbison, group executive chairman, CAPA, at the project announcement on November 1, 2010.

CAPA AeroPark satellite academies in New Delhi and Mumbai are scheduled to open in the second half of 2011, with the Bangalore campus opening in 2012. 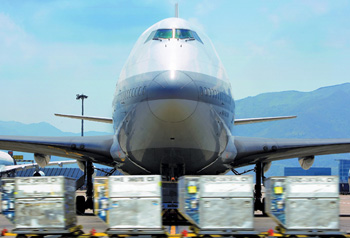 24-percent increase in air cargo activity in 2010 was enough to make Hong Kong International Airport (HKIA) the world's largest air cargo hub, surpassing Memphis International — home of FedEx's chief U.S. hub — for the first time in 18 years. HKIA is reporting cargo movements of 4.1 million tons for the year. It processed 3.38 million tons in 2009, according to Airports Council International, whose 2010 numbers will be finalized this spring. ACI says Memphis handled 3.69 million tons of freight and mail in 2009, which was virtually unchanged from 2008.

"We are proud to have achieved a record-breaking year in 2010 on the back of the strong economic performance of the Mainland and Hong Kong following the financial tsunami in late 2008," said Stanley Hui Hon-chung, chief executive officer of Airport Authority Hong Kong (AA), in January 2011. "This further reinforces HKIA's position as a leading international and regional aviation center, and a preferred gateway to the Mainland." In December, HKIA handled 4.4 million passengers and 362,000 tons of cargo, representing year-on-year growth of 6.4 percent and 10.1 percent respectively. During the same period, air traffic movements reached a monthly high of 27,725, up 14.5 percent.

Also in January, the Airport Authority unveiled Phase 1 of its HK$7 billion (US$900 million) midfield development project, which includes a new midfield concourse with parking stands for 20 aircraft, a cross-field taxiway and extension of an automated people mover.

hich major airports will dominate the world air transport system in the early 21st century? In "Airport Cities 21: The New Global Transport Centers of the 21st Century," Conway Data founder and Site Selection publisher McKinley Conway, whose flights have taken him down many a runway, looks at new airports around the world and discusses their impact on global development. The book, available at Amazon.com, also discusses site requirements and planning concepts for new global airports and related facilities. 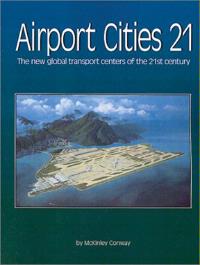 he Civil Aviation Authority of Singapore (CAAS), Changi Airport Group (CAG) and Schiphol Nederland B.V. (SNBV) signed a Memorandum of Understanding (MOU) in November 2010 to enhance collaboration on the use and further development of paperless freight documentation for the transport of air cargo between Amsterdam Airport Schiphol and Singapore Changi Airport. E-freight is an industry-wide initiative involving airports, carriers, ground handlers, freight forwarders, shippers and government agencies. It aims to integrate the air cargo and logistics supply chain by electronically linking stakeholders in the supply chain, promoting the adoption of paperless freight documentation and improving industry capabilities. This enhances data accuracy by reducing repeated manual data entry and boosts supply chain visibility, leading to productivity gains in the air cargo and logistics industry.

Under the MOU, the parties agree to exchange knowledge and expertise as well as explore the possibilities of joint research and development efforts that aim to stimulate the use of e-freight between Amsterdam Airport Schiphol and Singapore Changi Airport. The MOU also serves as a stepping stone to further enhance cooperation in other areas related to the seamless and sustainable transport of air freight, and to explore further opportunities of enhancing air cargo flows between the two airports. This includes the exchange of knowledge on the transport of perishables and high-tech products by air.

"For instance," he said, "the enabling of end-to-end handling of perishables cargo trade between Asia and Europe presents new value-added services and market growth opportunities for key stakeholders of both airports."