Site Selection’s Governor’s Cup returns to Texas, where Governor Rick Perry has some thoughts on how to make all states more competitive. For a synopsis, see the Tenth Amendment. 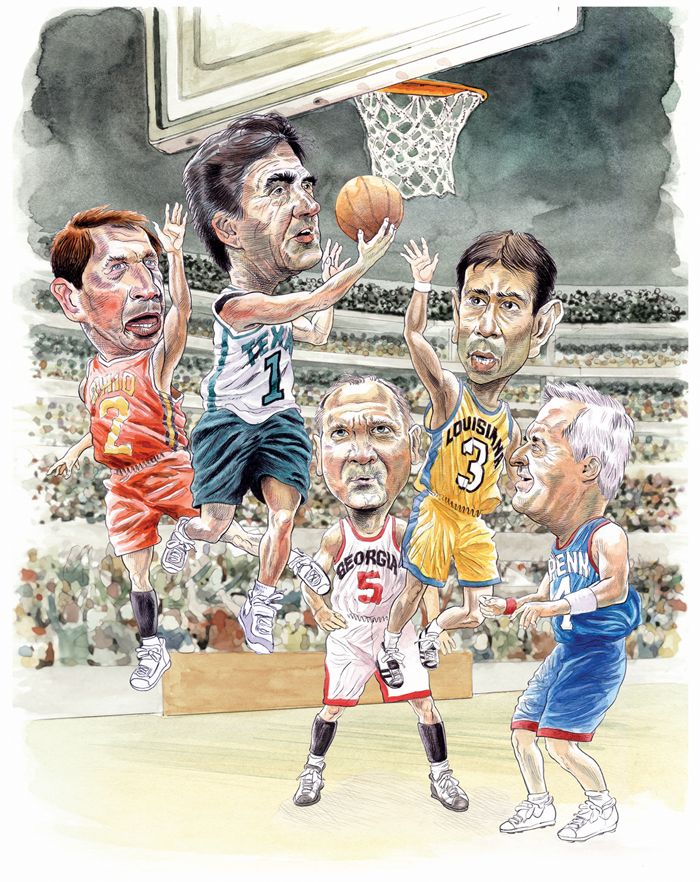 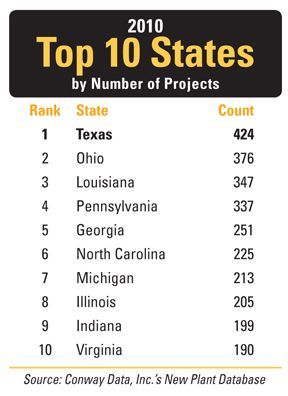 exas Governor Rick Perry is proud to have won the latest pick-up basketball game with his fellow governors. But rather than gloat, the recently re-elected Lone Star State power forward says he sincerely wants his opponents to work harder on their game. That, he says, will force Texas to be more competitive in future match-ups.

"It's a clear challenge to improve the business climate in their states to put pressure on Texas to be more competitive," says Perry. "As well as Texas has done in the past and in 2010, we're not going to be what we can be, or as strong as we can be, unless we have competition from other states."

Texas reclaimed Site Selection's Governor's Cup for 2010 new-project activity, with 424 projects, after a four-year claim to the Cup by Ohio. The Governor's Cup recognizes the state that in the previous calendar year won the most new projects and expansions according to Site Selection's proprietary New Plant Database. Qualifying projects involve private-sector capital investment in commercial facilities of at least US$1 million, 50 or more new jobs or new construction of at least 20,000 sq. ft. (1,860 sq. m.). Runners up in the 2010 competition are Ohio (376 projects), Louisiana (347), Pennsylvania (337) and Georgia (251).

State-to-state competition isn't just about making the states more competitive, though if it attracts investment and jobs, that's reward in itself. It makes the U.S. more competitive, and that's the way it's supposed to work anyway, Perry asserts. How much more competitive could the states be, and how many more jobs would they attract nationally, if he and his counterparts could use the game's original rulebook?

"It's really a 10th Amendment argument [which says] that one size doesn't fit all," says Perry. "The federal government needs to free us from overregulation in particular and over-taxation and let the states compete against each other." The 10th Amendment limits the federal government to only those powers outlined in the Constitution, leaving all others to the states or the people. Perry is a leading proponent of that, and it's a central driver of his economic development game plan.

Businesses large and small want protection from over-taxation, over-regulation and excessive litigation, says Perry. To the latter point, the governor is pushing the tort reform envelope in Texas to include a "loser pays" provision designed to discourage frivolous lawsuits.

"Businesses want stability and predictability in their regulations," he argues, not new regulatory mandates from federal bureaucracies.

"The federal government is coming into Texas to take over our clean-air permitting process," he illustrates. "It's been on the books for 17 years, it was formulated originally by [Democratic Gov.] Ann Richards. It was agreed to by the Clinton Administration. If those administrations put them in place, then why is [the Obama] administration attacking them? We have a flexible permitting process. We cleaned up the air more than any other state in the 2000s — a 27-percent reduction in ozone levels, a 53-percent reduction of nitrous oxide. We did it at the same time we were creating more jobs than any other state. You would think we would be held up as an example of how to do that, rather than have the government say, 'We're going to come in and take this over.' We know the result of that will be fewer permits, more costs and economic disaster in a state with huge refinery and other manufacturing concerns."

There is one area, however, where the federal government could show some leadership — the issue of taxes on online retail sales. Texas is in the midst of a dispute with online retail giant Amazon.com about whether the state can collect sales taxes of more than $260 million on goods sold to Texas residents that were processed in an Irving, Texas, facility that the company is now vacating.

"I'm working with our comptroller, bringing some people together with the Amazon folks to see if we can find the solution," says Perry. "This goes to the larger Internet taxation issue, and that one has to be dealt with at the federal level. I don't look to the federal government for many answers — we states can pretty much take care of ourselves. But there are national and international taxation issues that the feds do need to give some direction to." Barring that, Perry — the current chairman of the Republican Governors Association — says he is working with his peers to formulate a plan to bring to the federal government that would be in the best interests of all involved.

Meanwhile, says Perry, "My message to business is we're going to be very, very pro-business, and I say that without apology to anyone. It is the single most important thing that government does. Some, on the left in particular, say, 'Wait a minute. Educating our children or keeping the environment clean or building transportation infrastructure or taking care of people's health needs is the most important thing.' But here's the irrefutable fact: All of those are important, but the most important thing government does is create a climate where business men and women know they can risk their capital and know that they will have a fair opportunity to have a good return on that investment. If you don't do that, you cannot pay for the programs that educate children or build transportation infrastructure and so on. If you don't do that first, the others will suffer."

The governor's economic development priorities for the current legislative session include keeping in place a small-business tax cut passed in the last session and securing funding for three funds — the Texas Enterprise Fund (TEF), the Texas Emerging Technology Fund and a new incentives program for luring film production to the state — that Perry considers essential to closing many capital investment deals.

On February 15, the governor spoke to the first point at OLS Maintenance Supply in Houston: "The real drivers of job creation in Texas are our small business owners, the bold entrepreneurs who risk their future pursuing the dream of owning their own business. This session, we must take the necessary steps to preserve the competitive economic climate that allows these businesses to thrive by keeping taxes low and making the small business tax cut passed last session permanent."

The following day, Gov. Perry spoke with Site Selection about the second — funding the funds — among other topics.

"Every program deserves, and should have, the righteousness of public scrutiny," he says. "There is no program that shouldn't be looked at in terms of the benefits versus the cost. I argue that those programs have been efficiently run, and their return on investment has been substantial."

All told, Texas has invested $425 million in the TEF program since 2006, which has resulted in capital investment of $14.7 billion and "over 56,000 jobs that are directly attributable to the deals that we closed with that job-closing fund," says Perry. "Every bank in Texas would like to have that track record in terms of lending. It's a good return on investment, and the same is true of the emerging technology fund."

That program, created by the Texas Legislature in 2005 to fund R&D and commercialization of emerging technologies, is of particular interest to the governor, because of the potential for "a monstrously big return on investment. From time to time, you'll miss, and a company you invested in doesn't make it. But will the first bank to have never had losses in its loan portfolio please stand up? These are good, private-sector-proven tools that states are using to compete against each other. That's the basis of this issue. Does Texas want to unilaterally disarm from national competition for businesses? I hope the answer is no."

As for film-related incentives, says Perry, "we have become very competitive at bringing films to Texas, and keeping those crews here." Measures include the Texas Moving Image Industry Incentive Program that offers qualifying feature films, television programs, commercials, video games and stand-alone post-production/finishing projects the opportunity to receive a payment of 5 to 15 percent of eligible Texas spending upon completion of a review of their Texas expenditures. Other measures include up-front sales tax exemptions on most items rented or purchased for direct use in production; refunds of the 6-percent state occupancy tax on hotel rooms occupied for more than 30 consecutive days; and refunds on fuel tax paid on fuel used off-road.

Gov. Perry is resigned to the possibility that the three programs may not endure in their present forms, given the budget context in which they will be debated in the legislature.

"From my perspective, keeping them in place is just wise policy. How they're structured is a whole other issue we look forward to working on with the legislature," he says. "I'm willing to negotiate an amount, and maybe consolidate it all into one fund where we have the flexibility to use the funds in whichever area appears to be the best place to invest, and not have three different funds with three pots of money. We'll certainly negotiate that, but I hope the legislature will not put Texas at a competitive disadvantage. There are other governors out there, including Chris Christie in New Jersey and Mary Fallin in Oklahoma, who are both creating those types of funds today to be more competitive with states like Texas."

And that's just what the governor wants. 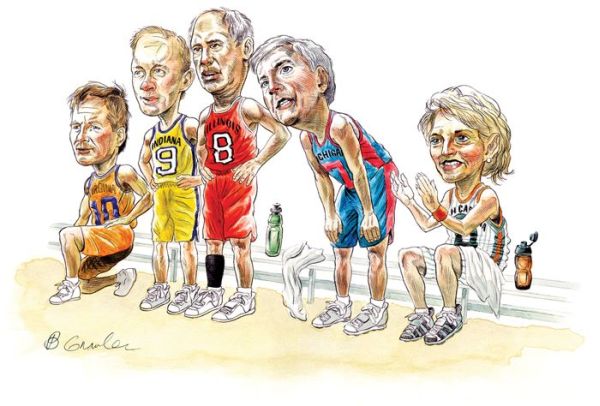 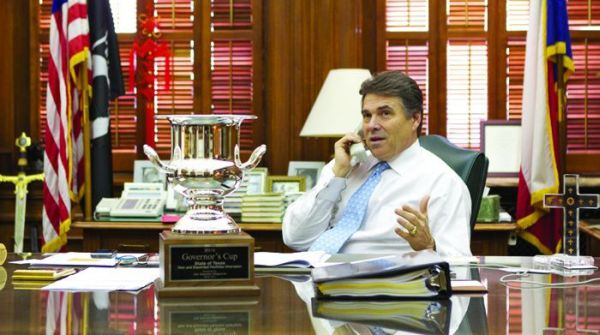 Texas Governor Rick Perry with the 2010 Site Selection Governor’s Cup. Less interference from the federal government would make all states more competitive, Perry maintains, and would make Texas even more competitive in this year’s race to attract corporate capital investment. 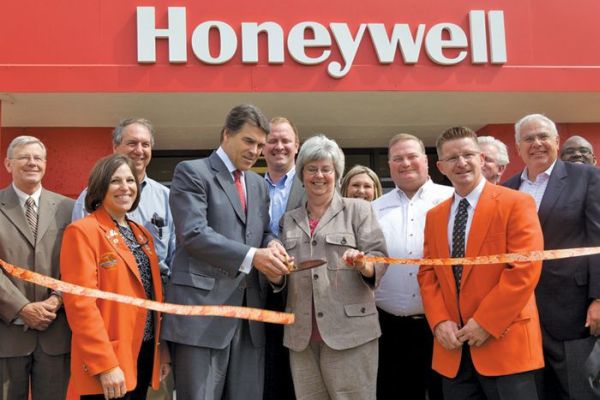 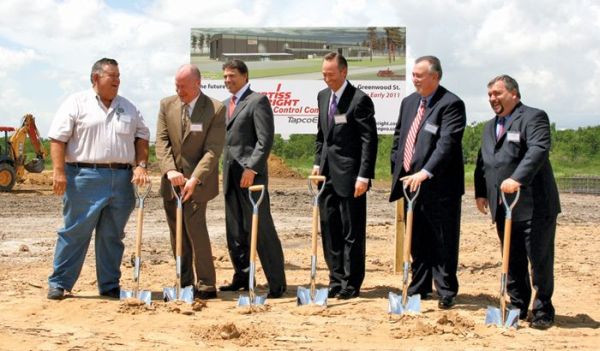 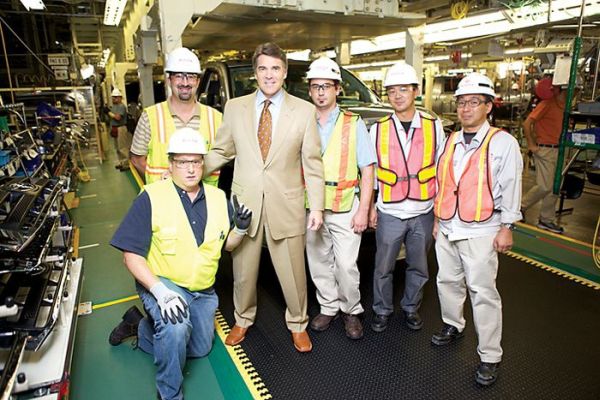 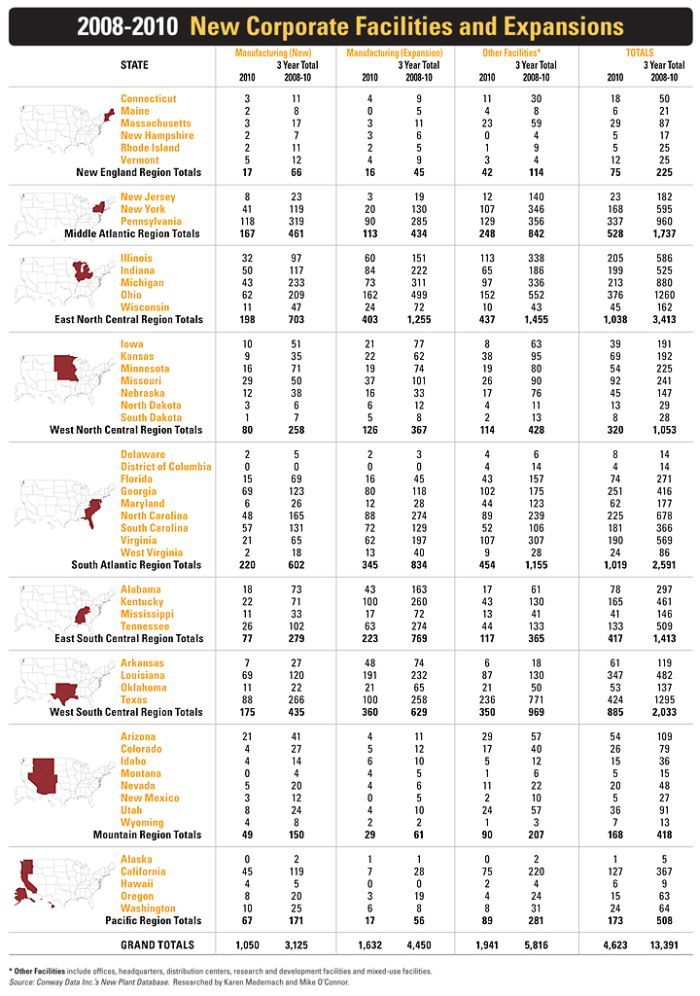 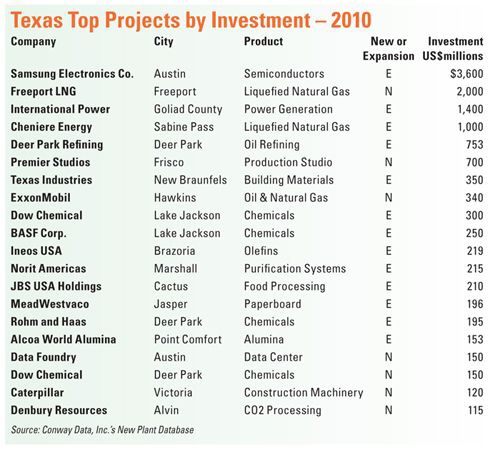