‘Project 21’ is the latest of many projects to land in Memphis.

Fifty-seven years after it was first developed, Rivergate Industrial Park (left), owned by Belz Enterprises, will welcome its biggest project ever when Mitsubishi Electric Power Products locates a new plant there. A Canadian National Railway line extension and access to the Mississippi are central to the project, as some of the transformers made at the plant (pictured in a rendering, right) will weigh as much as 800,000 pounds.
Images courtesy of Belz Enterprises and O’Neal Inc.
by ADAM BRUNS
G 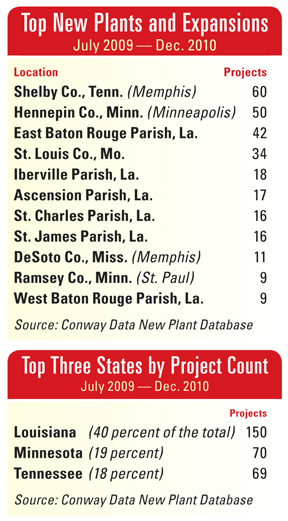 The company got something back the next day, in the form of a 15-year tax abatement valued at $34 million that was approved by the Memphis-Shelby County Industrial Development Board. It joined other incentives that include an $11-million FastTrack grant from the state, $1 million from Shelby County and the $8-million relocation of a major sewer line, which will be paid for by the City of Memphis.

Until now the sole producer of the company's transformers has been a single plant in Ako, Japan. Initial production in Memphis should begin by 2013 after extensive employee training in Memphis and Japan.

"We needed a large waterfront site near a city that could support our recruiting and training goals," said Brian Heery, president and CEO of MEPPI, on Feb. 14. "Memphis was chosen for its strengths in these areas and the support of its state and local leaders."

Mark Sweeney, principal at site selection consulting firm McCallum Sweeney, says "rail and water were critical" for transportation needs, with direct waterfront access surging toward the top in the end "because their product line ranges from very large to humongous."

Of the dozens of counties that abut the Mississippi River in 10 states, the jurisdictions highlighted in red above led the pack in corporate facility project activity between July 2009 and December 2010, accounting for 282 (74 percent) of the 378 total projects tallied. That total was 36 percent higher than the total of 278 projects tallied between July ’08 and Dec. ’09, and was even higher than the 348 tallied between July ’07 and Dec. ’08.

Sweeney says the project was code-named "Project 21" based on the company's internal project name of TX 21, which stands for "Transformer for the 21st Century." But it could have also stood for the 21 months the site selection process took.

"They knew there were market opportunities developing, but unlike some projects, there wasn't a strongly compelling date-to-market deadline yet. So that gave them the luxury of really being thorough."

The search focused east of the Great Plains, says Sweeney, mostly east of the Mississippi River. Once waterfront access was deemed essential, the search ended up evaluating 50 properties in 22 states. Some were crossed off due to brownfield status (both "small b" and "capital B," says Sweeney). Some didn't have large enough parcels to support the complex.

The search moved "pretty quickly" to inland waterway locations," he says. Some were rejected simply because "when you're on coastlines or riverfronts, you're almost automatically jumping right into the middle of areas of high environmental concern." Others were weeded out as geotechnical and soil analysis put the cost of construction too high. Even the chosen site in Memphis will see substantial costs associated with the plant's foundation. Sweeney says those costs made site development-related incentives the most important when it came time to talk financial assistance. The Memphis site also was one of only a handful that had permits already in place to build a new dock.

In the end, eight locations were visited by an engineering-focused team, and four finalist locations were visited by the entire team, including MEPPI executives. As the final stages unfolded, transition teams for departing Gov. Phil Bredesen and incoming Gov. Bill Haslam offered continuity reassurance. Locally, labor and training came to the fore.

"There are not a lot of very large transformers made in the U.S.," says Sweeney. "We wanted to make sure they were in the type of community where they could recruit world-class talent."

The Memphis team had to overcome a significant perception hurdle erected primarily by an early 2010 Forbes article that included Memphis in its "America's 20 Most Miserable Cities Index," based on a spectrum of criteria that range from serious economic measures to such debatable measuring sticks as weather and pro sports team performance. Sweeney went to the Greater Memphis Chamber team led by senior vice president of economic development Mark Herbison and told them it was a concern.

"In five days, they provided a document that I consider one of the best-focused project impact pieces of information that I've gotten from an economic development agency," says Sweeney. Memphis Mayor Wharton wrote an impassioned defense to Steve Forbes and a basketball for MEPPI CEO Brian Heery was signed by the entire Memphis Grizzlies NBA team.

A year later, even as Forbes once again was listing Memphis in the 2011 edition of its index, Grizzlies star Rudy Gay was the opening speaker at the MEPPI project announcement, which came just weeks after Electrolux had announced its own $230-million investment in an appliance plant just west of the MEPPI site that would employ 1,240.