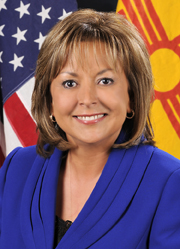 ov. Susana Martinez' background has more to do with courtrooms than boardrooms. Until her November 2010 election, she served as District Attorney for the 3rd Judicial District in Doña Ana County on the border with Mexico. But Martinez understands the issues facing corporate site selectors, if her State of the State address on January 18 is any indication. Like most states, New Mexico faces a budget deficit requiring difficult measures. Among those the governor has in mind are reducing a film-industry incentive and prodding state agencies to use the same operations manual so small businesses can accelerate their operating plans. Following are excerpts of the governor's first State of the State speech of interest to capital investors:

On the budget: "The day I was elected Governor, the state's budget deficit was estimated at just over $200 million. A week later, it doubled and grew to almost half a billion dollars. In the past, New Mexico's serious budget problems have been papered over with unrealistic projections and temporary infusions of federal stimulus dollars. This allowed politicians to shirk responsibility and avoid tough decisions. But I am here to tell the people of New Mexico that the days of kicking the can down the road are over. We have all been elected to take action."

On the film-industry incentive: "I propose reducing the state's film subsidy from 25 percent to 15 percent, which is where it first started. This has been incorrectly referred to as a tax credit. It has nothing to do with taxes. The way it works is when a film is made in the state, New Mexico taxpayers cover 25 percent of the costs.

"It's a simple and straightforward subsidy — 25 cents on the dollar. And it's been taken advantage of … One film company spent $100,000 chartering an actor's private jet, and New Mexico taxpayers paid $25,000 of it. We have a responsibility to see how each and every tax dollar is being spent … How many jobs are being created and whether we're getting a good bang for our buck. Eight states have reduced, suspended or completely eliminated their film subsidies. Studies found them too expensive for the few jobs they created. I support the film industry and support maintaining the incentive at 15 percent."

On job creation: "We must remember that the long-term solution to our budget woes is economic growth. We increase revenue by helping small businesses create new jobs — not by government creating new taxes. Let me speak plainly: New Mexicans are not under-taxed. The government has simply over-spent. I applaud the Legislative Finance Committee for putting forth a budget proposal that doesn't include tax increases and doesn't try to raid the permanent fund.

On site selection: "We must recognize that in a global economy, businesses will choose to locate and expand in areas that encourage — not impede — job growth. When a company is deciding whether it will operate in Albuquerque or Denver … in Roswell or Midland … in Farmington or Laramie, the deciding factor often comes down to the state's tax structure and regulatory policies. For too long, we've seen jobs leave New Mexico because neighboring states are more business-friendly, and it's not just our jobs we're losing to neighboring states. Too many of our sons and daughters are forced to move out of New Mexico in pursuit of those jobs. If our state is going to compete, if we're going to ensure our children can find a good-paying job close to home when they graduate, then New Mexico must become more business-friendly.

"Less than two weeks ago, I announced that Union Pacific Railroad will move its hub from El Paso, Texas, to Santa Teresa, New Mexico. More than 3,000 jobs will be created for the construction with 600 permanent jobs. To close the deal, we must put New Mexico on even footing with Texas and eliminate the tax on locomotive fuel. But we must do much more than provide targeted tax credits to certain industries. That's not the 'be all and end all' of economic development. We must set the stage to make wholesale changes to our tax structure and become more competitive with our neighbors. That's how we'll help all small businesses grow."

"One of the greatest and costliest challenges small businesses face is the fact that each agency creates its own maze of red tape. When a small business needs to get a permit from one state agency, they must abide by one process. And when that same small business needs a permit from another state agency, the process is completely different and they have to jump through a whole new set of hoops. So, I propose standardizing these administrative practices by passing the Red Tape Reduction Act. This will help small businesses understand regulatory guidelines and make complying with them less expensive, less time-consuming and less complicated. Time is money. And the more money a small business saves, the more employees they can hire."

.S. Foodservice-Albuquerque broke ground January 5th on a US$24-million, 135,000-sq.-ft. (12,540-sq.-m.) distribution center that the company says will better enable it to service customers in New Mexico, West Texas and Southern Colorado. The new facility, on a 42-acre (17-hectare) site, is expected to be complete by October 2011.

"The existing U.S. Foodservice facility in Albuquerque is operating at capacity, and we need additional space to serve the growing number of customers in the area," says Alexander Raine, vice president, corporate real estate. "We have a long, successful history of more than 20 years in Albuquerque and wanted to remain here. The new location is ideal for us as a food distribution company, because it has good access to major traffic arteries."

Working with CB Richard Ellis, says Raine, the site selection team looked at multiple locations in Albuquerque and Bernalillo County, and considered other regional opportunities, as well. "After evaluating the geography and population in the area, we determined that a base in the Albuquerque metropolitan area would enable us to best serve our customers. We worked very closely with representatives from Bernalillo County to complete the sale. The County approved an industrial revenue bond application from U.S. Foodservice that helps reduce our building and operations costs, and will help bring new jobs to the area as we continue to grow and expand."

The new facility will allow U.S. Foodservice-Albuquerque to provide its more than 1,300 customers with about 40 percent more products. The expansion will more than double the company's current cold storage capacity and increase the number of shipping and receiving docks.