One food processor moves into an historic industrial site, another goes solar
and a third will build a new plant to serve a growing market. 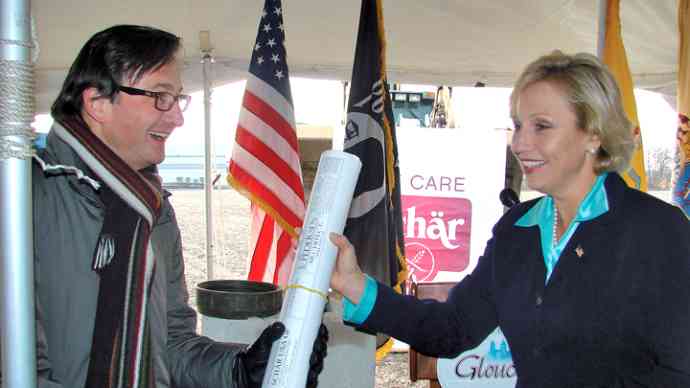 ood processing has long been an industrial staple in New Jersey, New York and Pennsylvania. Current projects include new investment by an Italian firm, a new tenant for Kodak's former manufacturing complex and a huge solar project by a firm known primarily for its pretzels.

An Italy-based food processor specializing in gluten-free foods is establishing a manufacturing beachhead in New Jersey as it seeks to serve a growing market. Schär USA is the American division of Dr. Schär Srl, based in Burgstall, Italy. Dr. Schär, which operates two plants in Germany, one in Italy, and is building another in Spain, is the market leader in the gluten-free segment in Europe. The company's product line includes breads, rolls, pasta, cookies and crackers and frozen meals.

The primary market for gluten-free foods is people with celiac disease, an inherited autoimmune disease resulting in an intolerance to gluten that affects one out of every 133 Americans, according to the Celiac Disease Foundation.

"All we do is gluten-free products," says Paul Altieri, Schär's director of U.S. production. "It's been an expanding market for 10 years. We pretty much gear our products to people who have celiac disease, from young children to adults. Around 2007, the company decided to branch out into the U.S. At that time a business and sales group was created in Lyndhurst. The company liked the area because of the Port of Newark, and we bring in our products that way. We've been growing nationally since then, selling through distributors. With the success of how our products were being received, the decision was made to have a manufacturing site in the U.S."

Altieri was part of the site selection process that looked at locations in New Jersey, Delaware and Pennsylvania, but primarily focused on New Jersey. Consideration was given to the company's supply chain and how products made in Europe were already moving into Schär's distribution center near Newark. The search narrowed to sites in central and southern New Jersey.

"We felt that New Jersey was a good location, and we looked at both existing buildings to retrofit and greenfield sites," Altieri says. "Even though there is a good availability of buildings, it was a personal preference of the owner not to compromise on a desire to duplicate our facilities in Europe."

Schär selected a site in the Pureland Industrial Park in Logan Township, located between Interstates 95 and 295 just east of Wilmington, Del., and south of Philadelphia International Airport. Proximity to the company's distribution center was a key driver, since Schär will continue to import some products from its European plants. Other considerations included proximity to other food companies (in an area known for a good food-manufacturing labor force) and suitable land.

Locating in South Jersey also presented Schär with the opportunity to work with contractors using non-prevailing-wage labor, Altieri says. It was a trade-off of sorts as the company passed on certain state incentives in the process.

"From what we had been told by real estate people, if you go south of Trenton, it is pretty easy to accomplish, so that's why we focused on sites south of Trenton," Altieri says. "The contractors we interviewed had previous experience building with non-union wages. We evaluated incentive packages from the state, and a lot are tied to the prevailing wages for construction. So it made sense to go without some of the incentives the state offered."

Altieri says the U.S. is behind Europe in its diagnosis of celiac disease. He says Schär's competitors in the U.S. are primarily "mom and pop" companies and Canadian manufacturers. Schär currently has strength in the Northeast, selling to supermarket chains such as Wegman's and Stop & Shop. In other regions, Schär's products can be found at Whole Foods, Kroger and Safeway.

"We do a lot of intense quality control on our products and raw materials to show we are gluten-free and that there is no risk of cross-contamination," Altieri says. "We focus on taste and having the appeal of mainstream products."

The picture has changed quite drastically at Building 642 in Rochester's Eastman Business Park, once home to a vast Kodak film and camera manufacturing operation. Building 642, built in 1982 and last used for film finishing by Kodak, now produces spaghetti sauce in one wing and an array of alcoholic libations in the other.

Kodak has been redeveloping the huge industrial site, which stretches from Rochester to the suburb of Greece, for several years. It is currently home to more than 25 companies.

LiDestri, a contract manufacturer and supplier of private-label products, is based in the Rochester suburb of Fairport and also has plants in California and New Jersey. LiDestri, which currently employs a total of about 700, produces more than two million jars of sauce and dips per day.

The move was prompted by a need for expansion, and infrastructure limitations at LiDestri's Spirits' operations in Dundee. The company launched its spirits operation at Eastman in 2010 and plans to begin making sauce there in March. The sauce operation will initially have one production line with space to add a second. LiDestri will eventually employ 200 at the site.

The venerable buildings at Eastman Business Park got the company's attention because its owner, Giovanni LiDestri, has an affinity for re-using old buildings.

"Our owner saw that Eastman had these vacant facilities and thought it was a good opportunity to expand," says Tony Ciulla, LiDestri's vice president of operations. "He loves to go brownfield. He hates to build brand new facilities, so we try to find buildings … and change their use. It makes more sense to purchase that building and relocate different parts of that operation into it."

LiDestri has spent the past year and a half gutting the facility and transforming it from a film-producing operation.

"We basically stripped it down, gutted it all out, put in new floors and ceilings and made it food-ready," Ciulla says. "We put in new drains and spent several million dollars preparing it for food processing. In one building, we have our spirits operation and in the other we will have a spaghetti sauce line. We are one of the largest co-packers of spaghetti sauce in America. We do contract manufacturing for various companies such as Frito-Lay, Barilla and Nestle. We do a lot of products for those customers and for store chains like Wegman's, Safeway and Albertson's."

Ciulla says the company will maintain the site in Dundee as a warehouse. He says that operation employed about 30. Employees were given an option to move to the new operation. Some did, and some elected to retire, he says.

Newman's Own is one of the recognizable brands that use LiDestri sauces. The company also has its own sauce brand, Francesco Rinaldi.

Change is afoot at the Pennsylvania pretzel manufacturing specialist formerly known as Snyder's of Hanover. Now part of a salty snack conglomerate after a December merger with Charlotte, N.C.-based Lance, the company has a new name, Snyder's-Lance. It is also proceeding with two projects conceived pre-merger: a huge solar farm across the highway from its headquarters, and a new R&D facility.

The solar farm will be Pennsylvania's largest ground-based solar-power site and will include more than 15,000 solar panels when completed this spring. The solar farm will reduce greenhouse gas emissions in excess of 230 million pounds of carbon dioxide over a 25-year period.

Snyder's-Lance spokeswoman Andrea Bartman says the project is all about the company, which already uses compostable packaging, being environmentally friendly and a solid corporate citizen.

The 26-acre (10.5-hectare) solar farm will generate more than 4.4 million kilowatt-hours annually and is estimated to supply 30 percent of the company's power requirements.

"The community we belong to has done wonderful things for our employees and customers," Bartman says. "We want to do everything we can to preserve our hometown. The solar farm was the next step in achieving our sustainability goals and ensuring our community and its environment is around for future generations to enjoy."

Snyder's-Lance is also proceeding with plans to build a research and development facility across from its headquarters. Bartman says it will be used to experiment, create, and test new products for the Snyder's-Lance portfolio. She is unable to comment on the project's costs, but pre-merger news accounts pegged it at around $10 million.

More than 900 people work at the Hanover site. Staffing numbers have not been finalized for the new research center.

"We've outgrown our current lab in the manufacturing facility, so those operations will move to the new building," she says. "We're also looking into adding an employee fitness center, but nothing has been finalized. We anticipate breaking ground before 2012."

Pennsylvania considers itself to be the nexus of U.S. pretzel manufacturing, with a few dozen companies churning out the twisted snack. Bartman says that is a result of the Pennsylvania Dutch heritage. 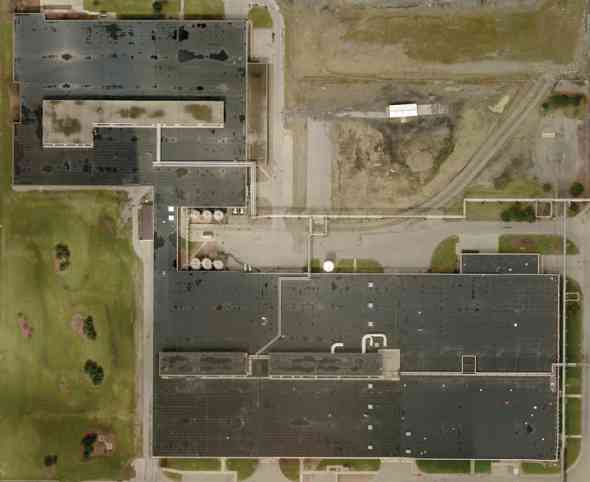 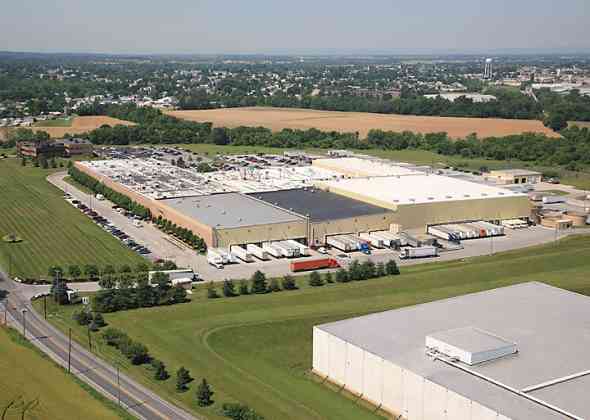 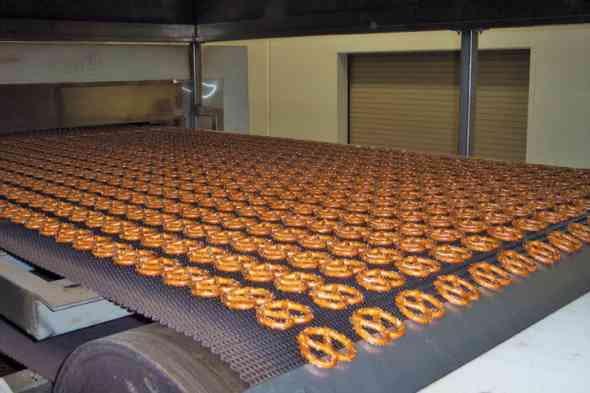