Commercial investment in the wind energy market is strong so far in 2011, following a
lackluster 2010. Is this renewable-energy sector now ready for its close-up? 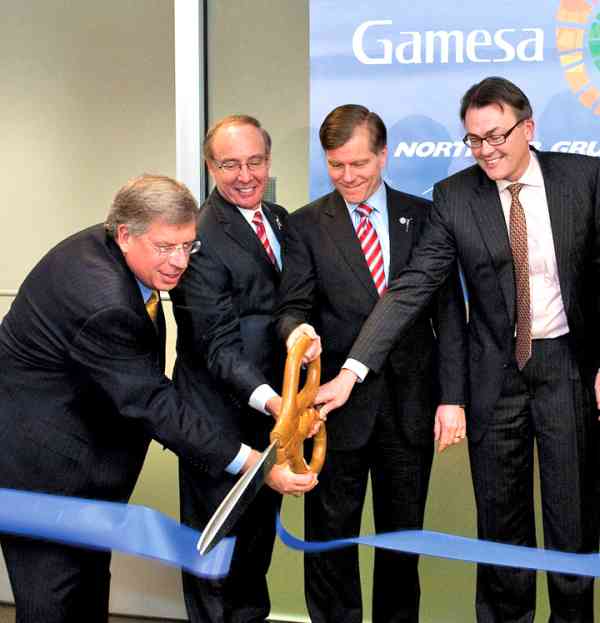 ind energy production activity was light and variable in much of 2010. But it's turning gusty in 2011, thanks in part to a one-year extension of the 1603 investment tax credit for developing renewable energy sources, passed in the closing days of the 111th Congress (see sidebar). On February 10, two significant projects were announced, sending senior executives at the Washington, D.C.-based American Wind Energy Association (AWEA) in separate directions to amplify their significance to the U.S. wind energy industry.

"Virginia is pleased to be the nexus where two industry leaders will join forces in the name of offshore wind innovation," said Virginia Governor Bob McDonnell at the Chesapeake event. "The Commonwealth offers all the attributes needed to provide an optimal location for offshore wind energy production, and to become the East Coast epicenter for the offshore wind supply chain. This partnership between Gamesa and Northrop Grumman shares similar goals with the National Offshore Wind Technology Center being developed in Hampton Roads, which the Commonwealth also supports. The opportunity to leverage both centers moves Virginia forward in our effort to become the energy capital of the East Coast and a leader in the nation's offshore wind industry."

'Unique Venture For A Unique Outcome'

Adds AWEA's Theismann, "Gamesa was the first European company to make a commitment to wind power manufacturing facilities in the U.S., and this is the first major manufacturing joint venture of a U.S. company and a European company to manufacture offshore wind turbines." Northrop Grumman brings to the table its extensive knowledge of the ocean and the ocean floor off the Atlantic coast. "It's a very unique joint venture for a very unique outcome, we hope, which is to put offshore wind turbines off the East Coast in a way that can be done economically for rate payers and successfully for the entrepreneurs that are behind getting this done."

The two companies formed the center to develop the next generation of offshore wind systems that will be deployed in the United States and around the world. It builds on an alliance the two companies formed in October to cooperate on the design, development, site selection, permitting, installation and testing of Gamesa's G11X-5.0-MW offshore wind generator prototype in the U.S., using Gamesa's multi-megawatt technology and Northrop Grumman Shipbuilding's experience in challenging marine environments.

"In our discussions with Gamesa, we realized that this is a very highly engineered product, much like the aircraft carriers and submarines we design and build — it's as complex as an engine room on a ship," says Matthew Mulherin, vice president and general manager for Northrop Grumman Shipbuilding. "But it's unique in that you build it and test it and put it in service, then leave the engine room, and nobody goes back in that engine room for a year. It's a challenging project with some of our best folks working on it. We're in the business of national security, and we see energy as a matter of national security."

"This is the first R&D center for offshore wind energy that Gamesa has opened, and it's the first of its kind in the U.S.," adds Dirk Matthys, chairman and CEO of Gamesa North America. "It's important to the U.S. market that this is being done here. Gamesa's efforts will focus on developing first this five-megawatt turbine, and we will also open a research center in the U.K. focusing on other models. You need a portfolio, because even in the ocean, there are different wind regimes and situations."

Gamesa plans to make the U.K. the core of its worldwide offshore wind business with plans to set up its marine wind technology center in Glasgow, Scotland, employing about 130. The company is developing a memorandum of understanding with Scottish Enterprise, the Dundee City Council and Forth Ports plc to embark on more development in Dundee around manufacturing, logistics and operations and maintenance (O&M) activities in the Scottish port. This is dependent on development of "offshore wind power projects in the area and the availability of sites for prototype offshore wind turbine generators," according to Gamesa, like the one near Chesapeake, presumably.

Gamesa's offshore plan could represent an investment of €50 million (US$68 million) in Scotland and create 300 direct jobs in the country. The announcement comes just a few months after Gamesa unveiled its industrial plan for offshore wind power in the U.K., where it plans to invest over €150 million ($206 million) through 2014. Gamesa's offshore wind business headquarters will be based in London. But its activity in the U.S. is significant and becoming more so.

"We were pioneers in 2005 to be the first worldwide wind turbine supplier to set up manufacturing facilities in the United States," says Jose Luis Blanco, global offshore program manager, Gamesa Technology Corp., referencing the company's investments in Pennsylvania. "We are now pioneers again in bringing research and development capabilities for offshore product to the U.S. This new center in Chesapeake is the first of its kind, and we expect an important boost for the offshore wind industry here and for the sector to take off."

The Gamesa-Northrop Grumman announcement comes on the heels of a February 7 announcement by the U.S. Departments of the Interior and Energy that they would spend $50.5 million on projects that support offshore wind energy deployment, particularly in four "high priority Wind Energy Areas" in the Mid-Atlantic (see map). The investment is part of the joint "National Offshore Wind Strategy: Creating an Offshore Wind Industry in the United States," the first-ever interagency plan on offshore wind energy. The goal is to "develop a sustainable, world-class offshore wind industry in a way that reduces conflict with other ocean uses and protects resources. The plan focuses on overcoming three key challenges: the relatively high cost of offshore wind energy; technical challenges surrounding installation, operations, and grid interconnection; and the lack of site data and experience with project permitting processes." Wind Energy Areas are also being identified off the coasts of Massachusetts and Rhode Island in the Northeast and North Carolina in the South Atlantic region.

"[Energy] Secretary Chu and [Interior] Secretary Salazar have taken significant and important actions that we believe will hasten development of the substantial wind energy potential on the U.S. East Coast," said Dirk Matthys at the February 10 event. "Gamesa is strongly committed to the U.S. market and looks forward to working with regulators and our business partners to build a vibrant offshore wind energy capability."

Matthys says the joint venture with Northrop Grumman is designed to reduce the cost of wind energy by 30 percent over the next four years.

In Abilene, Broadwind Energy invested $7 million to renovate and expand a former Lockheed Martin manufacturing facility for its new drivetrain service center in the central Texas city of 116,000. "Demand for wind turbine gearbox services is growing in this region — Texas is the number one state in the nation for installed megawatts, and Oklahoma is not far behind," said Peter C. Duprey, president and CEO. "The Broadwind facility we are dedicating today is the only facility with the gearing expertise and service capability to meet this emerging demand."

Texas is far and away the leading wind power state, with more than 10,000 MW of wind installations — more than twice its nearest competitor, Iowa.

"At the rate Texas is installing wind power, Broadwind's new wind turbine drivetrain service center couldn't have come sooner," said AWEA's Bode at the facility-opening event. "There's a reason why Broadwind is adding more jobs in Texas — because the Lone Star State knows energy, and it has embraced wind power. Through its new center, Broadwind Energy is providing an integral service within the dynamic wind energy value chain, right here in America. This facility is another example of the many jobs and economic benefits the wind industry is bringing to this country." 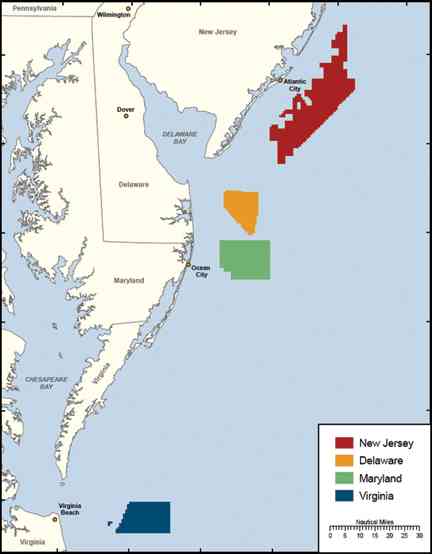 States With the Wind in Their Sails 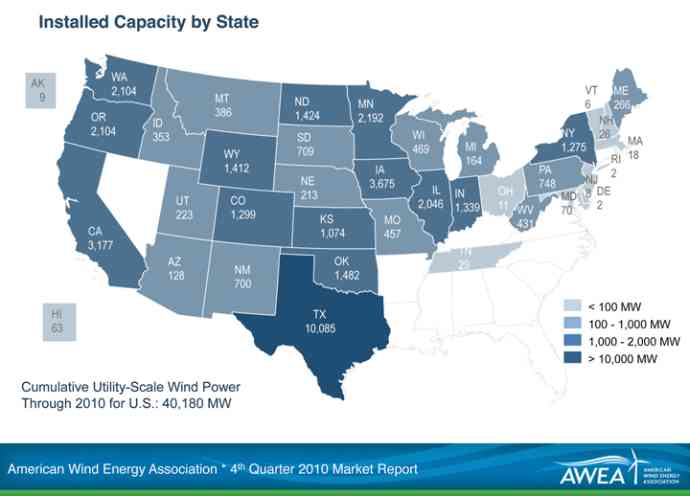 he American Wind Energy Association (AWEA) reports that the U.S. wind energy industry built just over 5,100 megawatts (MW) of wind power in 2010, or half the installations of 2009, in its U.S. Wind Industry Year-End 2010 Market Report. But it entered 2011 with over 5,600 MW currently under construction. With wind now cost-competitive with natural gas for new electric generation, utilities are moving to lock in favorable rates, the association maintains.

"Wind power is a great deal right now in many areas of the country," said Denise Bode, AWEA's CEO, when the report was released in January. "However, our industry continues to endure a boom-bust cycle because of the lack of long-term, predictable federal policies, in contrast to the permanent entitlements that fossil fuels have enjoyed for 90 years or more. Now that we're competing with natural gas on cost, we need consistent federal policies to ensure we have a diverse portfolio of energy sources in this country, and don't become over-reliant on one source or another."

A one-year extension of the 1603 Investment Tax Credit for renewable energy was passed in the final days of the 111th Congress, prompting some investors to move ahead with projects they may well have been shelved. Instead, the industry entered the new year with over 5,600 MW of electric power currently under construction, well above the same time a year earlier. To date, 40,180 MW of installed capacity is in place.

"It took two decades to ramp up and hit the 10,000 megawatt mark, and in just four or five years, we've hit the 20,000, 30,000 and now 40,000 megawatt mark," says Elizabeth Salerno, AWEA director of industry data & analysis. "That points to the exponential growth in the industry in recent years." To put the new milestone in perspective, says Salerno, 40,000 MW of energy is enough to power 10 million average American houses. As of mid-February, approximately 36,000 wind turbines are installed in the U.S. A rash of new projects are expected to start up in time to meet the new construction deadline for the 1603 tax credit, now set to expire at the end of 2011. Salerno says the extension is the chief driver of the surge in new wind power projects.

"The seamless extension of that tax credit is essential to the business in terms of making decisions," says Salerno, "because it provides a little bit longer-term certainty to companies. They can make some decisions now about starting or moving ahead with projects that they couldn't make when it was unclear if the credit would be extended."

At the same time, wind energy costs have dropped over the past two years, with power purchase agreements being signed in the range of 5 to 6 cents per kilowatt-hour recently, says Salerno. "With uncertainty around natural gas and power prices as the economy recovers, wind's long-term price stability is even more valued. We expect that utilities will move to lock in more wind contracts, given the cost-competitive nature of wind in today's market."

With uncertainty over national policies still holding back the U.S. industry, state targets for renewable energy continue to drive wind installations in many areas of the country, AWEA's report maintains. "We'll continue to work for a strong federal energy policy that drives the deployment of renewable energy technologies in the 112th Congress," Bode says, "but we'll also be defending and improving on state renewable targets, as well as promoting other sources of demand, such as more distributed and community wind projects."

The top five states for cumulative wind energy capacity at the close of 2010 all have such state targets:

With the addition of Delaware and Maryland, 38 states now have utility-scale wind projects, and 14 of those have now installed more than 1,000 MW of wind power.