Where Europe’s investors want to invest — and where they will. 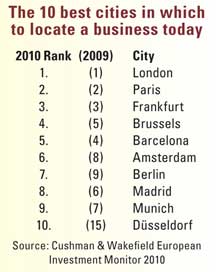 estern Europe’s signature cities — including four in Germany alone — dominate Cushman & Wakefield’s European Cities Monitor 2010 best for business ranking, now in its 21st year. But Moscow has emerged with the "most favored city" label, with senior executives from 47 of Europe’s 500 largest companies indicating they intend to expand in the Russian capital — more than in any other European city. That’s an increase of 12 such executives making that prediction over the number who made it in 2009.

The ranking measures 36 cities against such criteria as quality of life, access to markets, availability and quality of staff, cost of office space, telecommunications and transport links.

"Major corporates now see Moscow as their top target for future expansion," said Tim Millard, managing director of Cushman & Wakefield in Russia, when the report was released in October 2010. "Strong GDP growth and large scope for increased consumer spending make it an important driver for future company growth, and its oil and gas sector retains its allure. This upcoming demand is not yet priced into the market, so there remains a small window of opportunity for occupiers to secure their current and future requirements at reasonable rates. Likewise, investment yields are likely to compress rapidly, although it is almost too late to do the best deals."

London is ranked the number one city in six of the 12 major rankings, including access to markets, availability of qualified staff, and international and internal transport links. It scores poorly, however, on the cost of staff, the cost of office space and levels of pollution.

James Young, head of Cushman & Wakefield’s City office in London, explained: "Despite the financial crisis that has gripped the world over the last few years, London has retained its position as the number one place businesses want to be in Europe. Ultimately, this is a city that has huge cultural, geographic and language advantages, although it must work hard to ensure that businesses are attracted by government policy and not over-regulated or taxed away."

The top four factors for companies deciding where to relocate their business are, in order of importance, (1) easy access to markets, customers or clients; (2) availability of quality staff; (3) quality of telecommunications; (4) and transport links with other cities and internationally. Survey respondents also said that new opportunities from the emerging markets for products and services was the factor most likely to have an impact on business over the next five years. With concerns regarding an aging population across Europe, demographic and work force change is the second highest ranked factor.

"As companies continue to consolidate and restructure their operations, they are finding that being in the most efficient location can have an overriding impact on the immediate success of their business in achieving its business objectives," noted Elaine Rossall, head of business space research at Cushman & Wakefield. "As such, companies continue to overwhelmingly favor those cities that principally provide easy access to markets, transport infrastructure and qualified staff. London, Paris and Frankfurt continue to be ranked as the best three cities overall, because they yet again score well on these individual factors."