Studies reveal the potential impact
of the Great Lakes region as a
clean-energy manufacturing center. 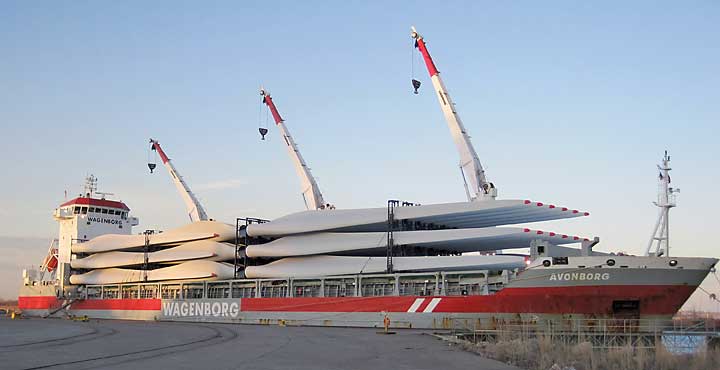 The first ship to traverse the St. Lawrence Seaway in 2011 brought a shipment of Vestas wind turbine blades to the Port of Indiana-Burns Harbor. The blades were bound for a wind farm in Ohio.
Photo courtesy of Ports of Indiana
by JOHN W. McCURRY
T 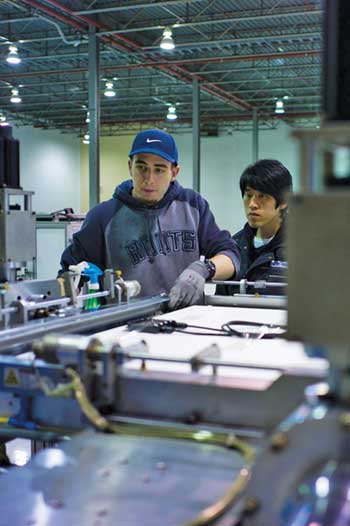 he Great Lakes continues to be a major jobs generator, and while the region’s economy is evolving, manufacturing still provides the bulk of employment. A recent study by Michigan Sea Grant says the Great Lakes are responsible for more than 1.5 million jobs in the eight-state region. A collaborative effort of the University of Michigan and Michigan State University, Michigan Sea Grant is part of the NOAA-National Sea Grant network of more than 30 university-based programs.

The analysis by Michigan Sea Grant is based on 2009 employment data from the Bureau of Labor Statistics and represents a conservative estimate of direct employment related to the Great Lakes in these industries: manufacturing, tourism and recreation, shipping, agriculture, science and engineering, utilities and mining.

While the Great Lakes has provided efficient transportation which has sustained traditional manufacturing, and its abundant water has attracted chemical and pharmaceutical companies, the region’s industrial makeup is evolving, says Jim Diana, director of Michigan Sea Grant and a professor at the University of Michigan School of Natural Resources and Environment.

"There has been a big effort in the area of clean energy production, wind turbine production and things of that sort," Diana says. "The lack of recognition of how water adds to the quality of life has made the general public totally misinformed about the Great Lakes, the quality of life here and the potential for industry and the economy. In this new economic era, growth will be less linked to traditional manufacturing and more focused on quality of life and the quality of the region’s natural resources."

A study by The Environmental Law & Policy Center, a Midwest public interest environmental legal advocacy and eco-business innovation organization, on Michigan’s solar and wind energy supply chain finds that 121 Michigan companies are engaged in the solar industry and 120 Michigan companies are part of the wind energy supply chain. The solar and wind industries provide over 10,000 jobs in Michigan. The state’s manufacturers and research and development institutions benefit from policies that encourage growth in the clean energy sector, according to the ELPC.

"Michigan can be a clean energy manufacturing powerhouse, and smart policies have helped attract new solar and wind business investment here," said Howard Learner, executive director of the Environmental Law & Policy Center. "From huge steel castings for wind turbines to ultra-thin solar shingles, clean energy equipment is made in Michigan. Old-line manufacturers are retooling to produce the solar and wind equipment for our future."

A similar ELPC study of Ohio found that there are 169 companies involved in the wind and solar sectors, employing 9,000.

One of many recent examples of manufacturing related to clean energy in the region is Northern Power Systems, a Vermont-based company, which is manufacturing wind turbines in partnership with its supplier Merrill Technologies Group in Saginaw, Mich. Northern Power expects to employ up to 137 by 2014.

Welland, Ont., a historically industrial city about 30 miles (48 km.) west of Buffalo, is one of many cities along the Great Lakes that are benefiting from the renewable energy movement. OSM Solar (Ontario Solar Manufacturing Corp.) began the first phase of production of solar panels at its assembly plant in Welland in February. The company will produce 230-watt modules with components supplied by its joint venture partner Symphony Energy of Korea. Symphony has been producing solar modules since 2003. OSM is operating in a 60,000-sq.-ft. (5,574-sq.-m.) building where Fantom Technologies used to churn out vacuum cleaners.

"One of the main reasons we chose Welland was proximity to the U.S. and having five border crossings within 20 minutes of here," says OSM Solar CEO John Gamble. "Our long-term goal and strategy is to sell into the U.S. market, knowing that the U.S. market will come to the forefront in solar in three to five years. Currently, we are building panels to supply the Ontario market. There is a special incentive plan in Ontario for Ontario-made panels, so that is our short-term market for the next 18 months or so. There is a huge market demand here and [there are] not a lot of players making panels here, so we have an undersupply situation."

OSM is ramping up its manufacturing operation with 35 employees at the end of April and 50 by July as additional equipment comes on stream. OSM supplies solar panels under the Symphony brand for residential, industrial and solar farm markets. Once OSM begins to serve the U.S., Gamble says the company will be able to serve 70 percent of the U.S. market within one day by truck.

"Welland has always had a history of manufacturing," Gamble says. "John Deere was here until it moved to Mexico a couple of years ago, and GM has been here. There are a lot of tool-and-die guys in the area. We felt that the area was definitely suited to find the employees we need. Finding good labor has not been an issue. The people we have hired have done an excellent job of learning the new skill of making solar panels. We will go to three shifts in July, and we are training, training, training as we go through the ramp-up process."

Gamble previously worked in the solar sector on the financial side, working with several companies in Europe over the past five years. That experience introduced him to some of the top solar panel builders in Asia and led to his association with Symphony Energy. OSM currently imports solar cells from Taiwan by air and other components from Korea by ship and rail via Vancouver. Gamble says he hopes to eventually source all components except the solar cells in North America.

The wind energy sector has also benefited from the Great Lakes transportation system. The Port of Indiana-Burns Harbor celebrated the opening of its 41st international shipping season with the arrival of the Avonborg on March 29. The Avonborg was the first ship through the St. Lambert lock in Québec, as the St. Lawrence Seaway opened its 53rd shipping season on March 22. The vessel carried 75 of the longest wind turbine blades in existence in North America on their journey from Esbjerg, Denmark, to Payne, Ohio, where the turbines will be installed in Horizon Wind Energy’s Timber Road project.

The ship was the first of three carrying wind turbine components for the project this spring. The blades were manufactured by Vestas in Denmark. Each blade is 161 ft. (49 m.) long.

"Federal Marine Terminals handled 15 shipments of wind cargo at the port last year and has made significant investments into specialized cargo-handling equipment," said Peter Laman, port director for the Port of Indiana. "Their experience, combined with our productive work force, makes this port a premier Midwest distribution point for wind components and oversized cargo."

Waterborne shipping generates more than 104,000 jobs and $14.2 billion in economic activity per year for the Indiana lakeshore economy. The Ports of Indiana is a statewide port authority that operates a system of three ports on the Ohio River and Lake Michigan in Mount Vernon, Burns Harbor and Jeffersonville.

The St. Lawrence Seaway Management Corporation (SLSMC) predicts that cargo shipments will rise by about 7 percent to 39.1 million tons for 2011.

"Transportation of raw materials serves as a bellwether for the economy as a whole, and despite volatile global economic conditions, we have reason to be cautiously optimistic regarding our various market segments," said Terence Bowles, SLSMC president and CEO. "Projections for the 2011 season foresee continued strength in the traditional staple cargoes of grain and iron ore. Shipments of road salt are projected to increase to replenish inventories depleted over a challenging winter season. Project cargo is pegged to rise due in part to continued activity in the oil sands."

Michigan dominates the number of jobs attributed to the Great Lakes.
Manufacturing accounts for two-thirds of the jobs in the eight states with Great Lakes shorelines.