No Rest for the Boys of Summer Spring has finally arrived, and with it came one of my favorite pastimes — following Major League Baseball. As a baseball fan I am geographically challenged. My favorite team has always been the Los Angeles Dodgers, but I have spent my entire life living in the Midwest. Being a Dodger fan living in the Central Time Zone means that most of the games start about the time I should be going to bed. Thanks to satellite TV, now it is fairly easy to catch any game. During my youth I had to rely on an easy-to-conceal transistor radio.

Believe it or not, I have come to realize that listening to all of those West Coast games earlier in my life provided important training for my current job. Evenings now find me juggling time zones in order to connect with my Asia team. Always trying to score that major hit on a project.

This season will have a new and very personal twist because my nephews have invited me to join their fantasy baseball league. There was no way I could turn down the challenge from these guys whose ages range from 13 to 30. I have to admit that the thought of having to take time to manage my roster on a daily basis was a little intimidating. But, even with that concern, I accepted the challenge, and now that I am in, winning is all that matters. The trash talking started on draft day back in March and will continue until October.

Once the regular season was under way, it occurred to me that managing a fantasy baseball team has many similarities to the business world. (I do hope my nephews are paying attention here.)

The first thing that you need to decide is your business strategy. Are you going to pursue power hitters, players that hit for average, good speed and fielding or pitching? For those of you keeping score, my strategy is great pitching coupled with players who are otherwise well rounded. Once your strategy is set, you draft your roster and fill it with the best players available. Then the fun really begins as you manage your business (I mean team) to keep your healthy and productive players active.

The first few weeks of this season had me scrambling every day to adjust my roster in order to keep my business (team) competitive and “on the field.” If I was not paying attention, I could go days without having all of my team members contributing. I could not count on my competition (those bad nephews) to inform me of my competitive disadvantage. In fact those nephews are counting on me being distracted by things like work and IAMC.

There are hundreds of similarities between sports and business. The business world is full of sports jargon. The reason is simple — someone is keeping score, and we all want to be on the winning team. My nephews may have thought that I would be too busy to compete with them this summer. They forgot that I will be applying all of my business tools in this fantasy baseball competition.

Have a great summer. In this artist’s conception, a Boeing KC-46A prepares to refuel a B-1B bomber in flight.
Image courtesy of Boeing
B

oeing on Feb. 24 received a contract from the U.S. Air Force to build the next-generation aerial refueling tanker aircraft that will replace 179 of the service's 400 KC-135 tankers. The contract calls for Boeing to design, develop, manufacture and deliver 18 initial combat-ready tankers by 2017.

"The KC-46A tankers will be built using a low-risk approach to manufacturing by a trained and experienced work force at existing Boeing facilities," said the company. "The KC-46A tanker also will fuel the economy as it supports approximately 50,000 total jobs with Boeing and more than 800 suppliers in more than 40 states."

The company's fight with EADS/Airbus continues, however, following a late March ruling by the WTO that rejected 80 percent of the EU's claims of improper government support of Boeing. The trade court found $2.7 billion in impermissible funding for Boeing, which the company said included $2.6 billion in NASA R&D funding. Last June, the WTO upheld approximately 80 percent of a claim, finding Airbus had received more than $20 billion in illegal government subsidies.

In other facility news, Boeing in March announced the beginning of construction of a second facility in . The new six-story, 320,000-sq.-ft. (29,728-sq.-m.) facility, designed by developer Gardner Tanenbaum Group, is being built in response to an increase in the Boeing Oklahoma City work force due to growth in the services business at the site and to program relocations. 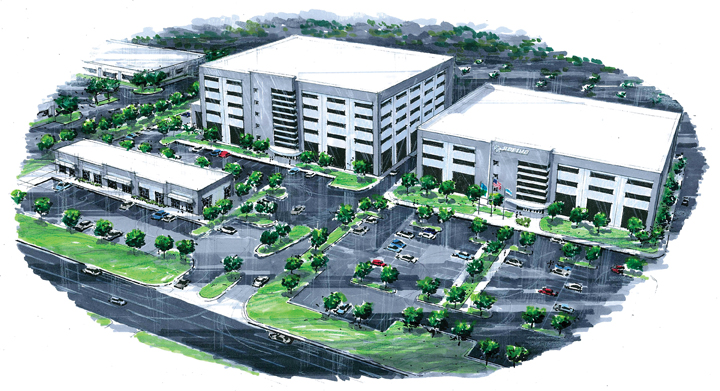 GE Aviation’s newly purchased 747, foreground, will take over as a flying testbed for an older version (background) that has been in operation for GE since 1992 at Southern California Logistics Airport in Victorville.
Photo courtesy of GE Aviation
G

E Aviation announced in February a $60-million investment to purchase and refurbish a Boeing 747-400 aircraft and turn it into a new flying test bed that will test the next generation of jet engines. The aircraft, recently purchased from Japan Airlines, features GE's CF6-80C2 engines and will be home-based at GE's facility. It will replace the current 747 flying testbed, which is the oldest version of the 747 still flying in the and the fifth oldest in the world. GE has been operating the current 747 flying testbed since 1992 and has operated a flying testbed since 1945.

"This investment in an updated 747 flying testbed is exciting news for the Victorville site and shows our commitment to the Southern California Logistics Airport and the region," said Dom Pitocco, plant leader for GE's Victorville Flight Test Operations. "Refurbishment of the new flying testbed will take about two years with the aircraft making its inaugural test flight with the new LEAP-X engine."

GE's Flight Test Operation moved to its Victorville facility in 2003 and was the first tenant at the Southern California Logistics Airport.

M announced in April a plan to build a manufacturing site for photovoltaic solar materials and renewable energy products in , part of the  High-tech Industrial Development Area in central . The new plant, 3M Materials Technologies () , will produce a variety of products, including an advanced solar backside barrier film used in crystalline silicon solar photovoltaic modules. The project will be 3M's ninth manufacturing facility in . Groundbreaking is set for two-phased construction in Q2 2011. The 3M Materials Technology () Co., Ltd. is a continuum of 3M's global expansion. This investment follows recent solar material expansions in the (, ); , ; and .

M's fellow Minneapolis-based firm Donaldson Co. announced in March it would begin construction on another manufacturing facility in . This new 140,000-sq.-ft. (13,006-sq.-m.) facility will manufacture air filters for the company's growing markets in the . Donaldson's existing plant in , which currently manufactures both air and liquid filters, will specialize in liquid filters upon the completion of this new air filter plant.

"A number of factors were considered in the selection process for the location of this new Kaman facility. scored highly in all criteria and subsequent to the location selection decision, has met all our expectations during the initial start-up phase of the operations," said Robert Kanaskie, president of Kaman Aerostructures. Earlier in 2010, welcomed a new facility from Hawker Beechcraft. (l. to r.) Gary Frantz, Con-way; Dick Heyob, Con-way driver & original driver of the truck; Dave Miller, former president of Con-way Central; and Dave Meier, Iowa 80 Trucking Museum Curator. Ole Number One was the first in the original fleet of 50 trucks and 150 trailers that began service in the company’s initial network of 11 service centers in nine Midwestern states. Today, Con-way Freight is a $3 billion company with more than 21,000 employees, 290 service centers and a fleet of more than 8,600 tractors and 25,000 trailers across North America.
Photo courtesy of Iowa 80 Trucking Museum
H

eadquarters consolidations can sometimes be freighted with loose ends, but it doesn't have to be that way. Con-way Freight in 2007 consolidated three regional carrier offices from

, and into one site in . When that HQ moved to larger digs in in 2009, "Ole Number One," a 1983 Ford CL 9000 cab-over tractor that was the company's first tractor to go into service in the under the Con-way name, was not scheduled to make the trip. It had been displayed in the main office lobby since 1993.

"For a variety of reasons, we decided not to move the truck from the previous location to the new building, and began a search for its new home," explains Con-way Freight spokesman Gary Frantz. In April that home was found, at the Iowa 80 Trucking Museum in

"During our search we discovered that no other place in the United States was doing the remarkable work of the Iowa 80 Trucking Museum to keep so many great reminders of our industry's past alive," said David L. Miller, who started with Con-way Central Express (CCX) as an operations supervisor in Cincinnati in 1983, rising through the ranks to become president of the former CCX and COO of Con-way Freight before retiring last year. "We are very proud to add Ole Number One to their collection." Photo courtesy of GENCO
I

n February, Pittsburgh-based third-party logistics provider GENCO ATC announced it was partnering with customer Kimberly-Clark Corp., Plug Power Inc., Air Products and the Aiken-Edgefield Development Partnership to launch the nation’s first multi-use industrial park fueling station to supply hydrogen directly for industrial, commercial, and government use. Above, a forklift operator fuels up at the hydrogen fueling station inside Kimberly-Clark’s 450,000-sq.-ft. (41,805-sq.-m.) distribution center at Sage Mill Industrial Park in Graniteville, S.C., managed by GENCO ATC. A $1.1 million award was made to GENCO ATC by the U.S. Dept. of Energy to help accelerate the growth of hydrogen fuel cells. Using hydrogen fuel cells instead of lead-acid batteries is estimated to reduce greenhouse gas emissions by 80 percent annually.