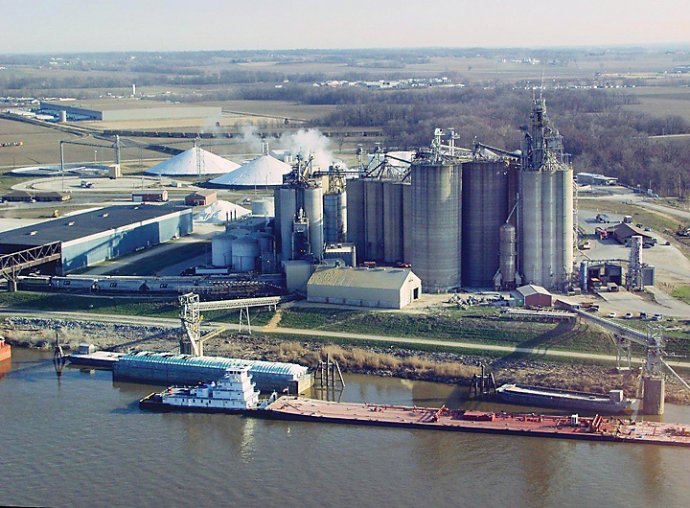 Tennis players crave the edge when it’s match point; Indiana businesses have it, when it comes to water, road, rail and air transport. 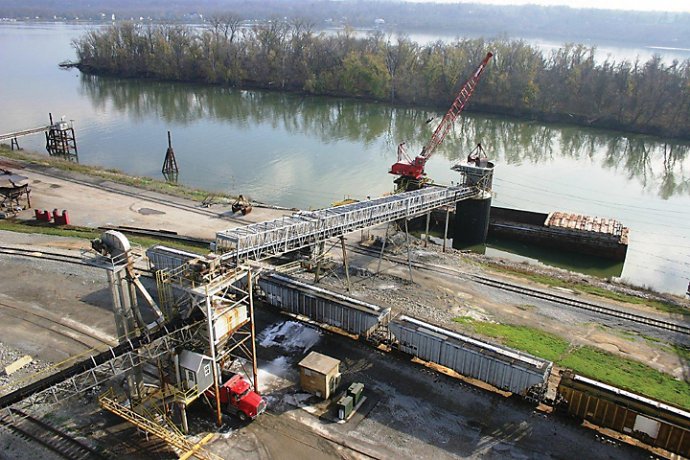 The Port of Indiana-Jeffersonville (top) and the Port of Indiana-Mount Vernon (bottom) are two of Indiana’s key logistics assets. These Ohio River ports serve a wide range of companies moving steel and other raw materials to Hoosier State manufacturers and companies exporting bulk goods to markets worldwide. Combined with the Port of Indiana-Burns Harbor, on Lake Michigan, the ports handled more than 7.7 million tons of cargo in 2010 — an 8-percent increase over the previous year.

nly a handful of Midwestern states offer companies the logistics advantage of a northern water route via the Great Lakes to the Atlantic Ocean and a southern water route via the Ohio and Mississippi Rivers to the Gulf of Mexico. But only Indiana delivers that advantage in addition to not one, but two air cargo hubs ­— FedEx at Indianapolis International and UPS at Louisville (Ky.) International on Indiana's southern border. In fact, make that three, if you include DHL's U.S. hub at Cincinnati/Northern Kentucky Airport, just a dozen miles from the southeast corner of the Hoosier State. Add an extensive Interstate highway network linking the region to more than 70 percent of the nation's business centers within a day's drive and plentiful rail capacity, and central and southern Indiana's logistics case becomes airtight. Couple that with Indiana's relatively strong business climate and pro-business governor, Mitch Daniels, and the state's competitive edge is sharper still.

"When you compare Indiana to our surrounding states, I don't think any offer a more competitive business climate or a more welcoming business climate than Indiana," says Rich Cooper, CEO of the Ports of Indiana, which operates three ports: Burns Harbor on Lake Michigan, and Jeffersonville and Mount Vernon on the Ohio River. "One of our primary goals at the Ports of Indiana is to provide a sustainable, competitive advantage for businesses that locate at our ports. Routinely, port tenants tell us that being a port company offers them as much as a $10-per-ton transportation cost advantage because of the multiple modes of transportation they can access."

There is no more economical way to ship goods today than by water, says Cooper, and the ports' rail and highway connections create "a perfect storm" for logistics players, he asserts. "In today's business environment, the costs of transporting inbound raw materials and outgoing finished goods are analyzed about as closely today as they have ever been in most businesses. They look at those costs as closely as they look at their cost of goods sold line, which is what used to drive business decisions. Today, the cost of logistics and the cost of transporting finished products and raw materials are at the top of the business analyst's list. We love that."

Ohio River Metal Services (ORMS) — Eagle Steel Products until its recent acquisition by Metals USA — moved more than 25 years ago from its Louisville site to a location across the Ohio River at the Port of Jeffersonville because of its water access, says Chuck Moore, president.

"We bring a lot of steel in by barge, truck and rail," he says, "but water is the least expensive transportation mode. Steel travels well on the water in all its forms, so we thought this was a great location." ORMS supplies steel to major local manufacturers, including General Electric and Ford in Louisville.

GE is repatriating much of its appliance manufacturing, including at the Louisville site, which procures about 95 percent of its processed steel requirements from ORMS. "It's one of those classic win-win-win situations, where the steel mill wins, we win as the middle man, and GE wins because of the lower transportation costs." Steel coils — mostly from U.S. Steel's Mon Valley Works facility near Pittsburgh — are lifted directly from the barge to the mill, where they are cut to size, recoiled and transported to GE on a just-in-time basis. "It's all about logistics," says Moore. "The transportation costs across the river to Louisville are pretty small from here, so it's a logical location."

Ford's Explorer production in Louisville is being retooled for new product lines, notes Moore. "The future looks very strong for not only Ford, but all the companies that supply parts to them as well. We have always thought of our port as the epicenter of appliance and automotive traffic. We're right on Interstates 64 and 65 — we sort of moved 'automotive alley' over here from I-75." ORMS has done some work for the new Honda plant in Greensburg, on I-74 southeast of Indianapolis, and the potential for much work from that automotive powerhouse is strong.

But Moore says his biggest customer will soon be air conditioner manufacturer Carrier Corp., in Indianapolis. The Ohio River will be less central to that logistics scenario, but Moore says Jeffersonville is close enough to Indianapolis, 100 miles away, that ORMS can deliver a just-in-time program there, as well. And there is increasing business from General Electric in Bloomington, Ind., southwest of Indianapolis, as well.

"We're really in a growth area," says Moore. "Heavy industry is coming back to Indiana fairly slowly, but the future bodes well for us."

Indiana's other Ohio River port, at Mount Vernon in the southwest corner of the state, is home to Aventine, which recently built one of the largest ethanol plants east of the Mississippi River, among other companies. Aventine commenced operations at the plant in 2010.

According to figures supplied by the Ports of Indiana, the Jeffersonville port supports nearly 11,000 jobs, the Mount Vernon port nearly 7,000. Total value of economic activity from Jeffersonville operations is $1.1 billion — $751 million at Mount Vernon. Primary goods transported to and from Indiana's ports in 2010, in order of quantity, were coal or coke, grain, fertilizer, steel, limestone and salt.

Interstates and Indiana state highways keep other industry sectors running smoothly in the region, including distributors to independent food markets. Two such companies rely on the state's highway network to remain competitive in a market dominated by national grocery store chains with more advanced logistics operations.

Loyd says the site search resulted in three potential locations, including sites in Ohio and Kentucky, all within 100 miles of the winning Cambridge City location. "A combination of state and community support" won the day for Indiana, when it came down to the final site selection, says Loyd.

Similarly, Winkler & Sons, a regional food distributor to independent grocery stores, services about 300 accounts from a distribution center in its hometown of Dale, Ind., near Evansville in the southwest part of Indiana. The company's roots date back a century, and it employs about 145 today in a town of approximately 2,500. Its service area includes southern Illinois, eastern Missouri, much of Indiana and western Kentucky.

"We're on I-64 and near Highway 231, which is a four-lane highway from Owensboro [Ky.] up to I-64, so logistically speaking, this has turned into a great location for distributing in the regions in which we want to be distributing," says Tom Winkler, president. "Since the Interstate came through, we've gone from a $20-million business to a $150-million business. The transportation logistics in the area have helped us grow. Things have improved drastically for us in that sense." Winkler & Sons uses trucking on the highways as its main logistics artery, but rail is available, if need be, says Winkler. Highway improvements have kept pace with his needs for moving products around the region, particularly south into Owensboro.

But does a 100-year-old Indiana company see a future in Indiana as a location for business?

"Indiana has become more pro-business within the last 10 years," says Winkler. "For many years, it had an inventory tax that really hurt us and caused us to think about moving to Kentucky. We probably would have made that move if we had found a like facility. But that law was changed, and in the last 10 years, the state is more business-friendly. Indiana is on the upswing now as a location."

Indianapolis International Airport is home to FedEx's second-largest U.S. hub, after its fortress Memphis operation. Opened in 1988, the Indy facility employs about 4,800 in nearly 1.5 million sq. ft. of space. About 70 FedEx flights per day use IND airport runways with more than 100 flights on peak days.

In northern Kentucky, DHL is expanding its air cargo hub, benefiting companies in southern Indiana and neighboring states. The company announced in February that it will invest $22.5 million to expand its hub facility at the Cincinnati/Northern Kentucky airport to meet the growing demands of international shipping customers. DHL will build on 19 acres of land leased from the CVG Airport authority to expand its existing aircraft parking apron and construct nine new aircraft gates. The expansion will enable parking for nine additional wide-body aircraft that will connect the United States to points in Asia, Europe and the Americas.

"As businesses increasingly go global to capitalize on emerging trends in international trade, the expansion at our CVG hub will position DHL to accommodate the growing needs of our importing and exporting customers," said Ian Clough, CEO for DHL Express U.S.

This is the second phase of a two-year, $40-million investment to enhance DHL operations at the Cincinnati hub, which includes equipment upgrades and various facility improvements. In October 2010, DHL announced a $12.5-million project to upgrade existing hardware and software applications running its auto sort system, improving the speed and reliability of shipment scanning and sorting as volumes grow at the Cincinnati hub. The CVG hub handles about 90 percent of the DHL volume that enters the U.S.

DHL says this investment also represents DHL's continued commitment to the U.S., a key component of its powerful global network. In the past two years, DHL restructured its U.S. Express division, focusing on its core international shipping specialty and implementing an extensive Certified International Specialist training program to ensure all employees are experts in the intricacies of international trade and transportation. The company also added an entirely new selection of Time Definite import and export express services and flights to the U.S. from Paris and Frankfurt to further expand next-day service from key points in Western Europe.

This investment profile was prepared under the auspices of Hoosier Energy, Bloomington, Ind. For more information, contact Harold Gutzwiller, at 812-876-0294 or hgutzwiller@HEPN.com. Also visit www.tdl.hoosiersites.com 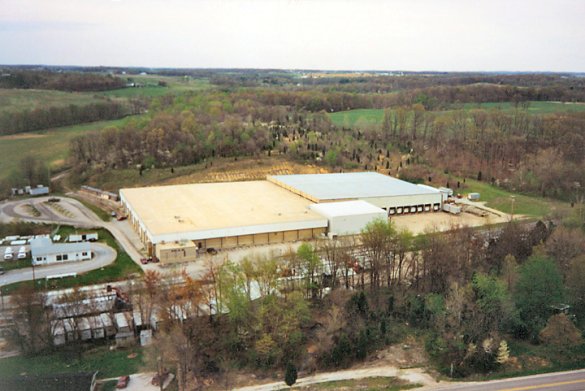 Winkler & Sons distributes food products by truck to about 300 independent grocery stores around the Midwest from this facility in Dale, near the intersection of I-64 (east-west) and U.S. Highway 231 (north-south) in southwest Indiana. 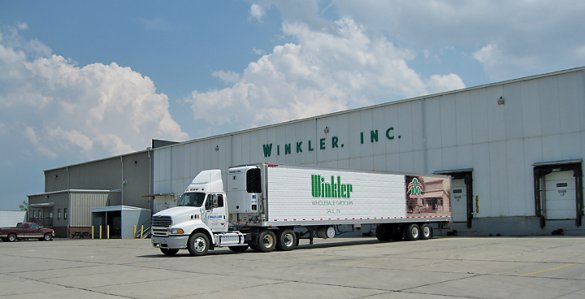 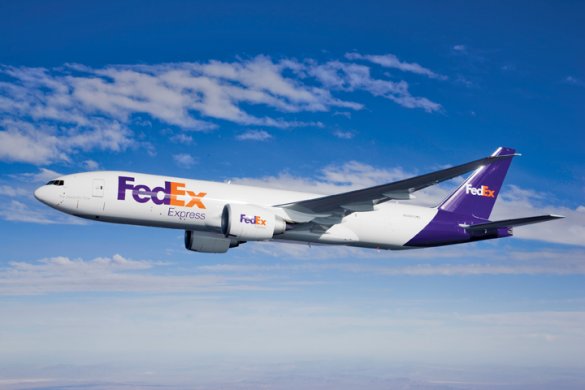 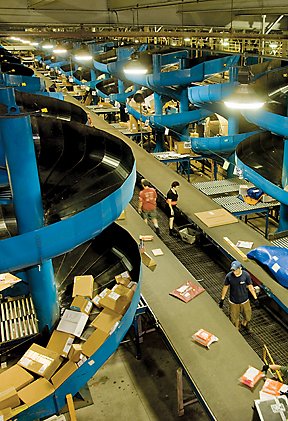 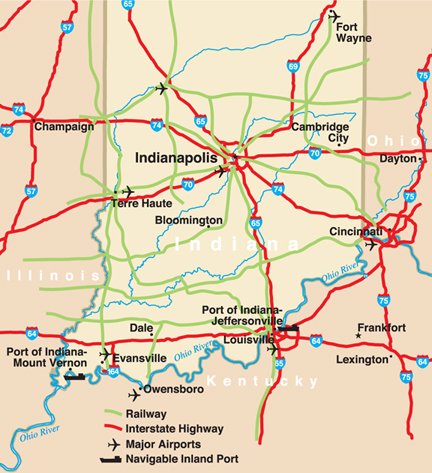 Source: www.conexusindiana.com, an alliance of private-sector companies, universities and other enterprises invested in Indiana's future as a logistics hub.