Ford President of the Americas Mark Fields, Kentucky Gov. Steve Beshear and Louisville Mayor Jerry Abramson chat after Ford’s announcement of its $600-million investment at the Louisville Assembly Plant. The $240 million in state and local incentives were also tied to a separate and previous $200-million investment at Ford’s Kentucky Truck Plant in Louisville (right).
Photo on left by Sam VarnHagen/Ford Motor Co.; other photo courtesy of Ford
by ADAM BRUNS
K

entucky continues to show the will and the way forward for the automotive industry. The Commonwealth’s 2010 economic development track record shows that approximately one-third of its top 35 corporate projects, ranked by investment amount, were in the automotive sector, including Ford’s decision to invest US$600 million in its Louisville Assembly Plant. No wonder the state ranked third in the nation for automotive projects last year, with 33.

It also comes as no surprise that the Golden Triangle of Louisville, Northern Kentucky and Lexington accounted for nearly 42 percent of all corporate facility projects tracked by the Conway Data New Plant Database. But metros outside that triangle also revved up in 2010, led by Bowling Green with 12 projects. As the charts show on the following page, each of those four areas’ corporate project portfolios was top-loaded with vehicular highlights.

Twelve micropolitan areas helped the Commonwealth rank second in the nation in total Top Micros in 2010, led by Danville, Campbellsville, state capital Frankfort, Glasgow, Murray and Somerset. Among those towns, Danville, just outside Lexington and home to Centre College, saw automotive projects from Lincoln Manufacturing’s precision stamping operation and Affinia Brake Parts that, between them, are creating 375 jobs. Somerset, in Pulaski County, welcomed a $23-million investment from Toyotetsu America.

Ford’s Louisville news in December was the big deal of the year, from the one member of the Big Three that sailed like a hyper-aware race car driver through the smoky pileup that was the North American automotive sector of the past few years.

A total of $240 million in incentives from state and local government will assist the Ford investment, which will convert the plant to make six different models, including the new Escape small SUV, beginning in late 2011. The investment brings with it 1,800 additional jobs that are expected to be filled through a combination of transferring employees from other facilities, re-activating workers on indefinite layoff at the time of launch and hiring new workers. The move comes even as the company moves Explorer SUV production to Chicago after 22 years in Louisville. Production of the Escape is moving east from the company’s plant in Kansas City, which is receiving its own $400-million investment to make a yet-to-be-announced new model.

Kentucky’s incentives are based upon an initial combined Ford investment of about $800 million — the $600 million for Louisville Assembly transformation and $200 million previously invested to accommodate Ford Expedition and Lincoln Navigator production at the company’s Kentucky Truck Plant in Louisville. Ford’s investment also is supported by the company’s green partnership with the U.S. Department of Energy. Louisville Assembly Plant is one of 11 Ford facilities in the U.S. participating in the Advanced Technology Vehicles Manufacturing Incentives Program.

“Our Louisville Assembly Plant transformation further proves our commitment to American manufacturing and our commitment to deliver the high-quality, fuel-efficient vehicles people really want,” said Mark Fields, Ford’s president of the Americas, citing the company’s collaboration with both UAW and Kentucky officials.

Reprogrammable tooling in the body shop will allow the plant to produce multiple vehicle models at the same time without requiring downtime for tooling changeover — making Louisville Assembly Plant Ford’s most flexible high-volume plant in the world.

“Manufacturing flexibility is a key to competitiveness, and we are continually exploring ways to raise the bar in this critical area of the business,” said Jim Tetreault, Ford’s vice president of North America Manufacturing.

In a late March presentation at the “Roads to Renewal II” conference in Dearborn, Mich., further entitled “Partnering for Prosperity: Communities & Companies in the Resurging Automotive Economy,” Ford’s Curt Magleby, director of state and local government relations, emphasized that same flexibility on the part of communities. “Economic development programs must influence investment decisions early in the decision process,” his presentation emphasized. “Economic development ‘tools’ and priorities must be flexible and relevant to address changing stakeholder needs (e.g. capital constraints).” Moreover, the long term must be kept in mind: “Collaboration is not driven by a single investment event … but by ongoing reviews and reassessments.”

Thanks to that brand of attentiveness by all stakeholders, Ford’s Louisville operations look to be ongoing for some time yet.

The momentum taking place in 2010 along Kentucky’s swath of the I-75 automotive corridor has shown no sign of abating in 2011. Among projects announced so far this year:


“These aren’t jobs that are planned over a five-year period, but rather are jobs that will be available as early as 4th quarter 2011,” said Shawn Adelsberger, general manager of the Martinrea Shelbyville division. 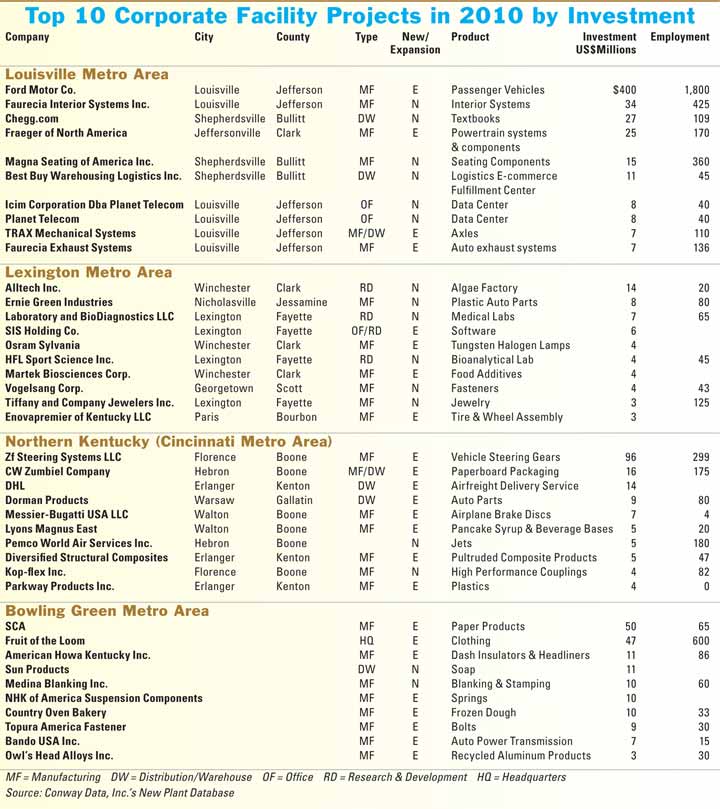