Investments from key players will boost activity in a critical Montréal-area industry. 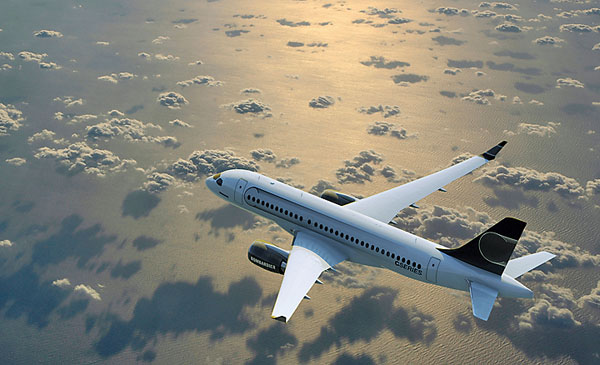 Bombardier’s CSeries will compete with airliners from Boeing and Airbus in the 100- to 145-seat market.
Photo courtesy of Bombardier
by MARK AREND
C

anada’s aerospace industry is forecast to climb modestly this year. That’s good news for the Montréal area, which is home to more than 40,000 workers in the sector and is Canada’s largest aerospace cluster. Only the life sciences and ICT sectors employ more in Québec’s largest metropolitan region. An autumn 2010 report on aerospace from the Conference Board of Canada anticipates a return to profitability in the coming months, and several new aerospace projects in and near Montréal point to industry expansion.

"Improving market conditions for commercial jets means that new orders are now coming in for the industry, albeit at a modest pace," said Michael Burt, associate director, Industrial Economic Trends, in a November 2010 release announcing the Conference Board of Canada’s sector analysis. Defense contracts were expected to remain anemic as countries with large budget deficits delay further spending.

More recently, in February 2011, the Conference Board had this to say about the Montréal economy and the aerospace sector’s role therein: "After rising by an estimated 2.7 percent last year, real GDP in Montréal will expand by a more modest 2.2 percent in 2011. Lower housing starts and provincial tax increases will hamper growth in the CMA this year. However, Montréal’s manufacturing sector is expected to continue the expansion it started last year, as segments of the aerospace industry recover."

Bombardier has started work at its aircraft production facility in Mirabel, Québec, to accommodate final assembly of the first flight test CSeries passenger aircraft. This is part of a five-phased development of the Mirabel plant, which will ultimately double in size to some 860,000 sq. ft. (79,897 sq. m.). Space optimization and re-tooling at the Mirabel facility, which began in March, will accommodate final assembly of the first CSeries aircraft required for the flight test and certification program. In addition, new buildings for the CSeries aircraft program will include a supplier satellite area; final assembly, structural joining and pulse line areas; an area for pre-flight testing; paint shops; and a delivery and administrative center.

A moving production line is being introduced at Bombardier’s St-Laurent Manufacturing Centre, where major components of the CSeries aircraft, such as the cockpit and aft fuselage, are being produced, and a moving final assembly line is planned for Mirabel.

In December, Pratt & Whitney Canada announced it would invest more than C$1 billion in research and development over the next five years to develop the next generation of high-performance aircraft engines. The investment includes a $300-million repayable contribution from the Government of Canada under the Strategic Aerospace and Defense Initiative (SADI) program.

In October 2010, the company inaugurated one of the largest flight test operations centers for civil aircraft engines in North America as part of the new P&WC Mirabel Aerospace Centre at Montréal-Mirabel International Airport. The center will support flight testing for the complete range of Pratt & Whitney engines, including turboprops and turbofans up to 90,000 pounds of thrust. Phase II of the Mirabel Aerospace Centre, already under way and scheduled for completion in spring 2011, includes construction of a highly advanced facility where the company will assemble and test the PurePower® PW1524G for the Bombardier CSeries and the PW800 engine family for the next generation of large business jets.

GE Canada’sGE Aviation business is investing C$63.5 million to diversify its manufacturing plant in Bromont, Québec, east of Montréal, where it makes fan blades and other engine components. The investment will add 80 new jobs to the facility’s existing 545. The province is making available financial assistance of up to $13.3 million from the Strategic Support for Investment (PASI) program, managed by Investissement Québec.