Four Canadian shipyards wait for their federal government to pick two of them. 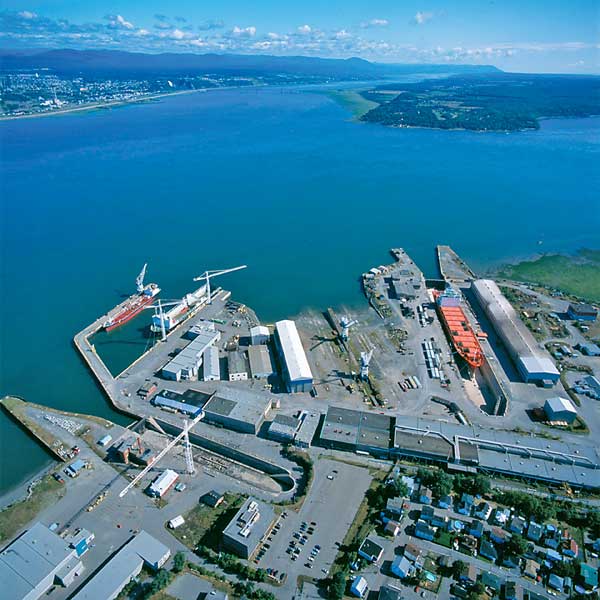 he long and still seething battle to land the U.S. Air Force’s aerial refueling tanker contract was seemingly resolved with the February selection of Boeing, and will mean 50,000 jobs in 40 states, Boeing says. But it’s not the only high-profile defense supply contract up for grabs in North America.

The National Shipbuilding Procurement Strategy (NSPS) is the result of extensive consultations with the Canadian marine and shipbuilding industry and will help to revitalize Canadian shipyards and build ships for the Navy and the Coast Guard. In February, the NPS Secretariat — composed of officials from Public Works and Government Services Canada, Department of National Defence, Industry Canada and Canadian Coast Guard, released its request for proposal to five short-listed shipyards:

But in April, Kiewit Offshore, part of the larger Omaha-based construction and mining firm, dropped out of the competition, saying its work force was already spread too thin for it to put together a realistic proposal. The company has major contracts serving the oil and gas sector in offshore Atlantic Canada and Alberta, among other locations.

The four yards remaining have until July 7 to submit their proposals, with the final decision expected later in the summer.

One of them, Davie, filed for creditor protection in 2010. The move nullified a collaboration agreement between Davie and Irving Shipbuilding to work together as shipbuilding centers of excellence with the upcoming federal contract in mind. That proposal was proffered in fall 2009. Now they are competing head to head.

On March 31, Davie announced it had entered into an exclusivity agreement with Fincantieri – Cantieri Navali Italiani and DRS Technologies Canada, a Finmeccanica company, to negotiate the potential acquisition of the shipyard by an entity that will be majority-owned by Fincantieri. In order to continue the process, Davie has obtained an order from the Québec Superior Court extending the stay of proceedings ordered by the Court to May 19, 2011, the whole pursuant to the Companies’ Creditors Arrangement Act.

"This is an important step in the right direction," said Davie President and CEO Johan Nydal, "but there is still a lot of work to do in order to complete the transaction within a very short time frame so the shipyard will be able to submit a valid bid for the federal contracts."

The Quebec provincial government has pledged to make sure Davie meets the federal government’s requirement of financial solvency. Davie, along with Irving, served the last major federal shipbuilding contract, which ended in 1996.

In the meantime, elected officials and company leaders are pulling out all the stops to ensure some of that business lands in their communities.

When Vancouver Shipyards Co., part of the Washington Marine Group Shipyards Division now renamed as Seaspan Marine Corp., was picked as a finalist last October, John Shaw, vice president — program management, noted the West Coast’s "strong and vibrant history of shipbuilding and delivering competitive products to the Federal and Provincial Governments, amongst other customers." Then he threw out a slightly more loaded comment:

"If B.C. shipbuilding is to survive and prosper in the 21st century, it is vitally important that the West Coast win an equitable portion of the [C]$$35 billion in Federal Naval and Canadian Coast Guard construction work."

Backing up its claim are new contracts announced in December to build a double-hulled oil barge and three 1,200-unit wood-chip barges. CEO Jonathan Whitworth said the projects would support the employment of 100 tradespeople, and that the timing was ideal for honing the team’s skilled trades and project management capabilities in advance of the NSPS decision.

Irving’s Halifax Shipyard has perhaps the most lauded heritage of the bunch, a 120-year resume that received its own gilding last September when the Honourable Gail Shea, minister of fisheries and oceans, cut the first steel plate for nine mid-shore patrol vessels to be built for the Canadian Coast Guard under a contract worth $194 million. Irving estimates up to 155 people will be employed by the project over the next four years.

"For the greater Halifax community this means an added $35 million in payroll," said Steve Durrell, president of Irving Shipbuilding Inc. "As well, the company estimates that approximately 50 local Nova Scotian suppliers will benefit from about $32 million in purchases of local goods and services. This is in addition to 130 estimated suppliers from the rest of Canada."

The Halifax shipyard is a major employer of members of CAW Marine Workers Local 1.

"This contract is great news for the three generations of workers serving at this shipyard today," said Karl Risser, president of the CAW local. "Those who have served over 40 years are teaching the next generation of 200 apprentices who are working here today. We urge the federal government to follow through and deliver contracts to keep people working after this job is done in 2013."

"This is the biggest opportunity for Nova Scotia since the navy was established 100 years ago," said Nova Scotia Premier Darrell Dexter. "Nova Scotia is ideally suited to meet the federal government’s needs. If successful, this contract would create and sustain up to 4,000 direct jobs across the province for the next 30 years."

"The economic impact and related spin-offs associated with winning this bid would be tremendous," added Liberal party leader Stephen McNeil. "This could create up to $7 billion in direct payroll, $2.7 billion in tax revenue, and $6.7 billion in consumer spending."