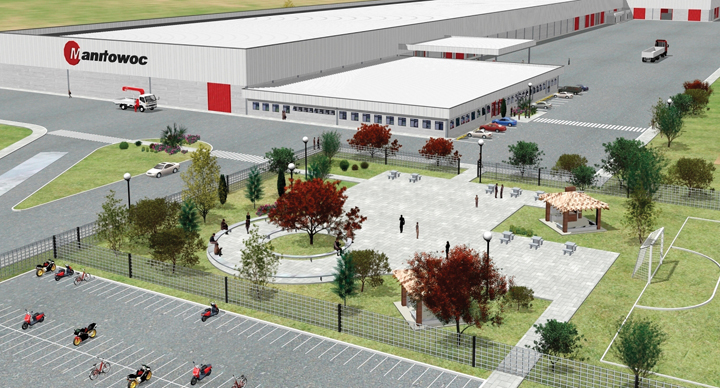 Construction equipment makers build a base in Brazil.

isconsin-based Manitowoc Cranes announced in February that it would establish its first Latin American manufacturing beachhead in Brazil. The 109-year old company is one of the world leaders in lifting equipment, and seeks to supply the construction boom in Brazil and neighboring nations.

"We put a strategy in place in 2007 with a goal of being number one or number two in Latin America for the products we sell," says Larry Weyers, executive vice president of Manitowoc Cranes' Americas region. "We have been strong in Latin America for 20 years, but I think we could clearly see growth coming, particularly in Brazil, for our type of products. It's part of a longer-term demand for power, energy, oil and gas refineries, infrastructure and ship-building markets, not necessarily related to the upcoming Olympics and World Cup in Brazil."

Weyers says Deloitte did a study for Manitowoc that examined several alternatives for Latin American manufacturing operations. Options also included Chile and Mexico, and more than one facility.

"We looked at a number of indicators including labor force and the scale of difficulty to do business, whether it's taxes or import duties," Weyers says. "We looked at payback, and it clearly pointed to a single facility in Brazil. We will provide products from that plant to Chile. For the Mexico market, most of our products right now come out of our U.S. plants."

Construction is now under way on Manitowoc's new plant in the southern Brazil city of Passo Fundo in the state of Rio Grande do Sul. Weyers says Passo Fundo offers proximity to the company's suppliers. He says the site is also near one of the top public universities for engineering in Brazil, the University of Passo Fundo.

Manitowoc, which has been active in the Latin American market for more than two decades, will maintain its sales and service office in Sao Paulo. The mining sector is booming in Chile and other South American countries, and Weyers says the company will be serving that industry.

"We just shipped a number of units to a gold mine in Chile in March," he says.

JC Bamford Excavators, a global construction equipment specialist based in Rocester, England, is building a $100-million factory in Soracaba, Brazil, to produce excavators and backhoe loaders. The 350,000-sq.-ft. (32,000-sq.-m.) factory in Brazil is being built a few miles from JCB's existing factories, and about 50 miles (81 km.) west of Sao Paulo. JCB has been producing backhoes in Brazil since 2001 and excavators since 2010.

"Last year saw a welcome return to growth for JCB, with an increase in our worldwide sales of almost 50 percent, which is a tremendous achievement in a very competitive market," said JC Bamford Chairman Sir Anthony Bamford. "One thing that sets us apart as a privately owned, family company is that we take a long-term view and can make decisions quickly. With markets growing so rapidly, the time is now right for us to enhance our already strong presence in Brazil, and as a result I'm delighted to announce that we are building a new factory in Brazil for the production of excavators and backhoe loaders."

Soracaba is also the location for Case New Holland's new industrial complex, a Site Selection Top Deal of 2010 which opened in March 2010 and includes a factory and parts logistics and distribution center. Case New Holland, which is part of the Fiat Group, anticipates that the factory could create up to 3,000 jobs when it reaches full production in 2012.

The $628-million project is part of the Fiat Group investment plan for the years 2007-2011. Fiat describes the project as the biggest single machine industry investment in Brazil's history. The Sorocaba factory is producing agricultural and construction equipment to supply the Brazilian market, as well as exporting to other Latin American countries and more than 50 countries around the world.

PACCAR, a Bellevue, Wash.-based manufacturer of commercial trucks under the Kenworth, Peterbilt and DAF brands, is also boosting its South American presence. The company announced in February that it is evaluating potential sites in Brazil for a factory to build its DAF trucks. PACCAR opened a parts distribution center in Santiago, Chile, in December. The search for a site in Brazil was still ongoing in early April.

"We are still at the very early stages in our site search," says Robin Easton, PACCAR's treasurer.

JC Bamford is building a new factory in Soracaba, Brazil, to manufacture its excavating machines.
Image courtesy of JC Bamford