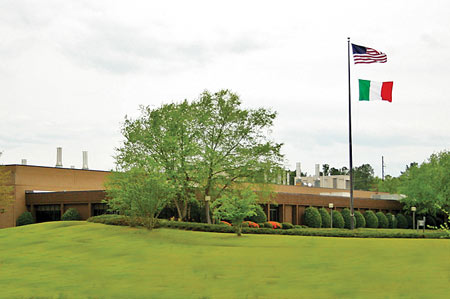 South Carolina has a long history of investment by foreign-based companies. One of the latest to do so is Italy-based Saati, which has chosen Fountain Inn as a manufacturing base for its Saati Americas division.
Photo courtesy of Saati Americas
S

outh Carolina is rapidly emerging as a center for advanced materials manufacturing, especially in the development of composites. New companies are being attracted to the state from around the globe due in part to the state's expertise in textiles.

One such company is Materials Innovation Technology (MIT), which has established Lake City in Florence County as a manufacturing base to produce composite products for the aerospace and automotive sectors. MIT has developed proprietary technology to reclaim carbon fibers from scrap materials. Jim Stike, MIT's president, says the company worked on the technology for about five years, received patents and was funded by SBIR programs from the U.S. Departments of Energy and Defense and the National Science Foundation.

"It was time to take the technology out of the lab and pilot plant and put it into commercialization production scale," Stike says.

MIT's target markets are aerospace and automotives, or any industry that seeks lightweight materials. The company is based near Asheville, N.C., but could find no suitable buildings in the area when it began to look for a manufacturing facility.

"We contacted the South Carolina Dept. of Commerce and the next day they sent us information on 10 buildings that were available in the Greenville and Columbia areas as well as buildings in Sumter and Florence counties," Stike says. "The availability of existing sites was pretty impressive."

Stike says by the time MIT began narrowing the field, the recession and banking crisis was full-blown and the process slowed. However, he says South Carolina officials became more aggressive in their recruitment.

"The state kept sweetening the deal and offered more incentives," Stike says. "We finally landed on a building in Lake City with potential to expand, and with the best incentive package we could get. Not only did the state have tremendously aggressive programs for tax abatement, job creation and employee training, the county was also very aggressive and helped us up-fit the building to our specifications."

"They said, 'You would be crazy not to go where the best deal is,' " Stike recalls.

The Lake City facility was built as a spec building in 2003, but had been empty for six years. The building has been re-fitted to suit MIT's needs, and the first group of employees has completed training programs developed through the state.

"We have 20 people at that site right now and we are waiting for the general economy to pick up," Stike says. "This is new innovation, and we are going after unplowed territory. We, however, are optimistic, and things are starting to point in the right direction for us."

The 14-acre (5.7-hectare) site in Lake City offers room for future expansion, plus an adjacent 50-acre (20-hectare) parcel that is available. MIT's goal is to create 120 jobs by 2015. Stike says he believes that goal will be met or exceeded.

MIT extracts carbon fibers from the manufacturing remnants of several industries, chiefly aerospace. The company is working with Boeing, using the leftovers from materials used to make its 787 Dreamliner. MIT receives its raw materials from a long list of companies and industries including several Boeing suppliers. The company is also working with Airbus and its suppliers, as well as Bombardier and Honda Jet. But not all of MIT's raw materials come from aviation.

"We've got a whole tractor-trailer load of used hockey sticks," Stike says. "We also get materials from Trek bikes, which uses carbon in the frames of its racing bikes.

MIT maintains its administrative and engineering group in Fletcher, N.C.

"We are already talking about expanding and going into new areas and starting to commercialize," Stike says. "It's 'crawl, walk, run' as we move out of funded development work into commercialization."

Another company taking advantage of the state's textile expertise and availability of existing buildings is Saati Americas, the U.S. division of the Italy-based global advanced textiles and engineered materials company. The company has moved into a 260,000-sq.-ft. (24,154-sq.-m.) building formerly occupied by Kemet Electronics in Fountain Inn, about 15 miles (24 km.) south of Greenville.

John Tauriello, vice president for the composites and protection division of Saati Americas, says the company's site search for a new manufacturing facility cut a swath through the heart of the traditional textile manufacturing region of the Carolinas.

"We took a look at a corridor between Charlotte and Greenville and in so doing we looked at several locations in both states," Tauriello says. "We were very pleased to come to South Carolina because we felt we were welcomed into the area by the South Carolina Dept. of Commerce and the Greenville Area Development Corp. We felt like they offered a very business-friendly approach."

Tauriello says Saati had a tight set of site selection criteria which limited the number of potential sites. The company wanted an existing facility rather than building a new plant, and it wanted to be in a region with other high-tech companies.

"We appreciated the advanced materials industry that is developing in the Greenville area," Tauriello says. "We have a heritage in textiles, and while most people think of textiles as weaving towels out of cotton, we are talking about more engineered textiles. There is also a skilled and motivated labor force we can tap into."

Saati expects to employ between 75 and 100 at the facility within three years. The company is currently in the second phase of refitting the building with machinery, and expects to be fully operational by the end of September 2011.

Saati serves four principal markets: composites for applications in industries such as automotives, aerospace, defense and wind energy; fabrics for protection applications for body armor and vehicle protection; chemicals for the screen printing industry; and microfiltration fabrics with applications ranging from medical products to acoustic filtering for cell phones.

Alexium International is another high-tech textile specialist that has migrated to South Carolina's Upstate. The Australia-based firm, which develops advanced fabrics for defense applications, has opened a facility in Greer in Greenville County and anticipates creating 200 jobs by 2015.

"South Carolina is very much a pro-business state," says Stefan Susta, Alexium's COO. "We found that for some of our initial applications, South Carolina still has a lot to offer in its work force and potential business partners and collaborators, even universities we can work with. Like they say in Greenville, 'Live, work, play.' It's a pleasant environment."

A significant portion of South Carolina's advanced materials sector is connected to the state's long association with the textile industry. While the commodity end of the business is mostly gone, the highly technical segment of the industry is thriving.

"While many textile companies are having a hard time, the technical textiles sector is doing relatively well and, I think, is the future and picture of what the textile industry will look like in much of the old "textile belt" in this country," says William C. Smith, a long-time technical textiles consultant based in Greenville. "New technology and new applications are constantly being developed."

"Clemson University's ICAR [International Center for Automotive Research] will result in new textile materials for use in automotives." Smith says. "Likewise, Boeing's new Charleston plant for the 787 Dreamliner is using carbon composites, as well as textiles for insulation and interiors — all resulting in lighter and more fuel efficient aircraft."

Boeing said it would vigorously contest what it called a “legally frivolous” complaint brought before the National Labor Relations Board on April 20 by the International Association of Machinists and Aerospace Workers, which challenges Boeing’s 2009 decision to complement production capacity in Washington state with this new assembly plant, nearly complete, in North Charleston, S.C.
Photo courtesy of Boeing