ome of the world's leading producers of fibers and fiber-related products have large new projects in various stages of development. Here's a look at two.

Owens Corning, a global producer of glass fiber reinforcements, has opened a new production facility in the Yuhang Economic and Development Zone in Hangzhou, China. The plant significantly expands the company's capacity in China.

"Building a new facility in China is part of our global business strategy to supply our customers locally in growing regions of the world," said Owens Corning Chairman and CEO Mike Thaman.

Capacity from the new Yuhang plant, currently in its first phase of operation, will augment output from an existing facility nearby, and will supply rovings (slightly twisted rolls or strands of fibers) to the Asia Pacific market that are currently being imported from Europe and the Americas. The new facility employs approximately 280 people and brings the number of composite production sites in Asia to eight. 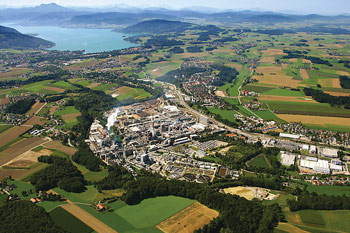 The Lenzing Group plans to build an industrial-scale factory for its Tencel fibers at its Lenzing, Austria, headquarters.
Photo courtesy of the Lenzing Group

In Austria, the Lenzing Group, a specialist in textile fibers, is expanding in its namesake city. The expansion includes the construction of the first industrial-scale production plant for Tencel fibers at the company's site in Lenzing, Upper Austria. The company is also adding a new production line at its South Pacific Viscose subsidiary in Purwakarta, Indonesia. The projects, along with those already in progress, will boost the Lenzing Group's annual fiber production capacity by about 25 percent. The total investment is more than US$412 million.

The new investment program also includes the expansion of the Tencel production site in Mobile, Ala. At Lenzing's site in Nanjing, China, a second production line is currently under construction, which is scheduled to almost double current production capacity to 140,000 metric tons by mid-2011. xxonMobil Chemical officially opened its in March. The $90-million facility, which employs 200, is located in 's Zizhu Science-Based Industrial Park.

"The opening of the is a significant milestone demonstrating our long-term commitment to and the region," said Steve Pryor, president of ExxonMobil Chemical Co.

"The enables us to work more closely with Asian customers on premium product applications and tailor solutions to the local market," said Will Cirioli, the company's vice president, Global Technology.

Port Project Under Way in Russia

odrugestvo Group, a fast-growing agro-industrial company, has started construction on a new port complex in . The $430-million project, scheduled for completion in 2013, will include a new deep-sea port terminal and soybean crushing plant. The Sodrugestvo Group has already invested more than $600 million in port infrastructure and processing facilities in since 2001.

"Sodrugestvo's continuing investment in our facilities underscores our commitment to the Russian market which is critically important to our group's health and future growth," said Alexander V. Lutsenko, chairman, Sodrugestvo. "This nearly half-billion-dollar expenditure will provide us with new production and storage facilities and new shipping berths that will allow us to increase our presence in Northern, Central and ."

The new port complex has been specially designed to support the import and export of dry bulk agricultural commodities and vegetal oils. Headquartered in , the company has 32 facilities located in nine countries including , , , the and several Eastern European nations. Bayer MaterialScience will expand in Brunsbüttel, Germany.
B

ayer MaterialScience plans to invest more than $144 million in the expansion of the high-tech production plant for MDI (diphenylmethane diisocyanate) at the in . MDI is the raw material for polyurethane rigid foam, which is effective when used for thermal insulation in buildings and in refrigeration.

The project is part of the phased optimization concept announced previously for isocyanate production in . The first phase is the construction of a new production plant for TDI (toluene diisocyanate) in with an annual capacity of 300,000 metric tons per year. The facility is scheduled to come on stream in 2014. Bayer said the , in Schleswig-Holstein state near the mouth of the in northern , was chosen over other Bayer sites due to the availability of raw materials and existing infrastructure. he project in reached a milestone on March 31 with the lifting into place of a 400-ton steel bridge connecting the project's two towers. It is now the tallest sky bridge in the world at 664 ft. (202.5 m.) high. The mixed-use project is being developed by International Capital Trading and is being built by Arabtec Construction and National Projects & Construction. The sky bridge is made out of structural steel, enveloped with aluminum and glass cladding and supported at four points in the two towers. The new sky bridge is 30 meters (98 ft.) higher than the sky bridge of the in .