Greater Columbus and the State of Ohio work to corral
Bob Evans Farms’ headquarters in the Village of New Albany. 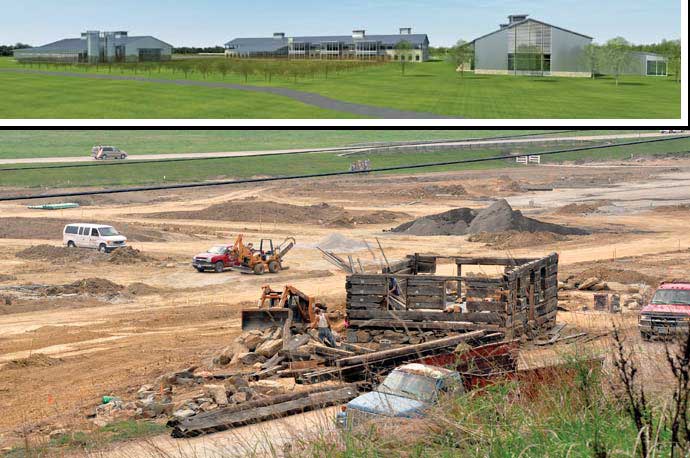 In addition to its headquarters investment (rendering, inset), Bob Evans Inc. is investing more than $3 million in the renovation of its iconic farm in Rio Grande, Ohio.
Images courtesy of Bob Evans Farms
by ADAM BRUNS
L 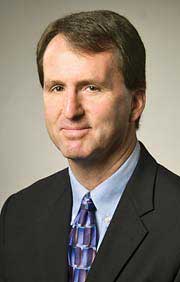 ike the old bromide about making sausage, sometimes you don’t want to see how a deal was put together. But in the case of “Project Sausage” — the new $33.5-million Bob Evans Farms headquarters announced last March in New Albany, Ohio, just outside Columbus — the substance appears to live up to the sizzle for everyone at the table.

Legend has it that the late Bob Evans himself, who was born in 1918 near Toledo and had farm-raised the company from the southeast Ohio town of Rio Grande since opening his first restaurant in 1962, was told that he couldn’t keep running such a big company from Rio Grande. So he headed north on Highway 23, got near Columbus, and asked if he had yet reached the city limits. When told that he had, the legend insists, he got off at the next exit and said, “Okay, the corporate headquarters will be right here.”

“There never was a true master plan,” says legend re-teller Joe Eulberg, the executive vice president of human resources for Bob Evans whose responsibilities also include corporate communications, philanthropic functions and leading the renovation of the original Bob Evans Farm. Instead, the company took the piecemeal approach as needs arose — buying the adjacent Southland Mall, for instance, when they needed more office, test kitchen and training space — resulting in a hopscotch effect and eventually, that hemmed-in feeling.

“It was getting to be a real pain,” says Eulberg of the campus first established in 1968. “We have a lot of space here but it doesn’t work very well, and is carved up every which way.”

There’s a master plan now, thanks to the marriage of long-term corporate strategy on the company’s part with the long-term vision and master-planning execution that is the Village of New Albany. The latter has been led in large part by development firm New Albany Co. and its founder Leslie Wexner, founder, president and CEO of The Limited Brands, who, as he did with NetJets a few years ago, took a personal interest in Bob Evans Farms’ future.

“You almost can’t say enough good things about Les Wexner and what he’s doing there,” says Eulberg. “He saw what we need to look like and feel like, and it’s exactly the same thought process he has for the community. He was astoundingly generous, making sure we have the resources, making sure every shareholder, employee and customer will be proud of what the Bob Evans headquarters will be.”

In a word: iconic. The match crystallized at a town hall meeting hosted by Bob Evans CEO Steve Davis, who flashed slides of rolling fields and white fences. Everyone identified it as the original Bob Evans farm. But it turned out to be New Albany. “It already looks like what Bob Evans looks like,” says Eulberg.

In an increasingly mobile and competitive landscape, the Bob Evans project story demonstrates that a company’s out-of-state alternative may be more real than ruse, and a company’s community-minded principles can be too.

The move out of the City of Columbus rankled its share of city officials, who felt they had made a strong offer with a site in the Polaris development in the city, and offered an incentive package totaling $14 million, compared to a New Albany package that totaled almost $10 million. The move is also receiving from the Ohio Dept. of Development a 70-percent, 10-year tax credit for promising to add 150 jobs, and $7.2 million in additional payroll, to its existing headquarters staff of 400.

Eulberg says the company truly went the extra mile to see how it could somehow reconfigure its existing 38-acre (15.4-hectare) campus, but all the options “were far more expensive than going greenfield, because of the way it had been built ad hoc over the years, even when you adjust for the fact that we owned the land.” There was also a projected three-year campus disruption factor, versus 32 months with the greenfield option: “So for about three years you’d completely turn the place on its head, build something sub-optimal and hurt productivity.”

As Eulberg’s group looked around, they also realized that special requirements such as food innovation and product development spaces did not mesh well with most existing building stock. “You can’t just take eight stories of a downtown high-rise,” he says. Thus began a robust greenfield search process led by consultant Tom Carter. One option was land Bob Evans owns in Richardson, Texas, from its acquisition of the Country Sausage company, another homegrown, farm-based family enterprise originally run by the Owens family. Carter, Eulberg and Davis knew the area from having lived there. And the asset in Richardson that Bob Evans Inc. had acquired was not yet fully utilized.

“It’s a beautiful kind of family farm in a very urbanized dense setting,” says Bill Sproull, president and CEO of the Richardson Economic Development Partnership. He says the city and its telecom corridor, including the Samsung Telecom USA headquarters across the street from the sausage company, “kind of grew up around the original Owens farm. It’s not a huge property, but it’s very idyllic, an oasis in the middle of an urbanized corporate suburban community.”

“It’s a company with a national presence, and Dallas is easy to travel out of, with an ample work force and an attractive cost of living,” says Tom Carter. “So there were a lot of good reasons to consider it. It wasn’t like we were throwing a dart at a dartboard tying to find a place outside of Ohio. You could easily make a case for it.”

Jennifer Chrysler, director of community development for the Village of New Albany, says any doubts about the viability of the Texas option don’t give enough credit to the Ohio Dept. of Development nor, by corollary, to local agencies like hers.

“I doubt there is a whole lot of trickery going on. We’ve received calls, and you know when they’re going to leave and when they’re not,” she says. “The telltale sign is holdings in another state.”

She says the old idea that just because you grew a company in one state you’re going to keep it there indefinitely no longer holds water.

“I don’t think anything is final anymore,” she says. “It’s where you can grow a business. So I definitely think that there was a real threat to explore other opportunities outside Ohio. Also they’re a retailer, and their goal is to expand their footprint. You grow in other places. They’re already a staple here in Ohio.”

The company employs 14,000 Ohioans, and its mix of various facilities, along with nearly 200 restaurants in the state, generates almost $36 million in tax revenue each year in Ohio.

The Vision Thing and The Right Thing

Ultimately, says Joe Eulberg, his company was planning for many decades into the future. “That was filter number one,” he says, followed by strict economics, which included incentives. “Regardless of whether you like or don’t like subsidies, if they’re being offered and you don’t ask for that, you’re not doing your duty for your shareholders,” he says. “The state and New Albany were a class act. They didn’t really play the nickel-and-dime game so much. They wanted to put together a package that makes it compelling from the get-go, rather than 75 rounds of negotiations.”

Just as important for Bob Evans was its sense of duty and obligation to the City of Columbus and its soon-to-be-former campus. “I’ve never worked with a company that has more integrity than Bob Evans has,” says Carter.

“We give the state a lot of credit for being willing to get out of the bureaucratic box,” Eulberg says. “We’re not going to leave a place and board the window up and hang a sign. We want to make sure that this place continues to be a place that has good jobs, growth and activity. It will be a great home for somebody. The state was very helpful. They got very creative in designing things that are key parts of marketing this place. We think there will be more jobs on this campus after we leave than there are now.”

Chrysler says even before her team knew it was Bob Evans, they learned that it was a company interested in becoming part of the fabric of the community, and which had a strong emphasis on values and customer commitments, all of which, she says, “fit to a ‘T’ the types of companies we had already attracted.” And once the prospect was identified, knowing the physical constraints of its Columbus campus made it less awkward to pursue. “The professionals we work with know that businesses have to make decisions that are best for their functionality,” she says. “Government can’t be a hindrance to that, nor can we necessarily guide it that much. The private sector drives business and drives decisions, and we all understand that.

In New Albany, instead of the standard “coming soon” sign, Bob Evans has erected a silo that matches the one found down on the farm in Rio Grande. The project is the latest manifestation of a 25-year-old master-planning vision that began with the needs of corporate end users receiving just as much attention as the needs of homebuyers. Chrysler says many companies “like the idea that they know who their neighbors are today and who they’re going to be tomorrow.” They also like the fiber-optic network built with utility AEP and operated by Bluemile Inc. “That infrastructure has saved the average company between 15 and 20 percent on their cost of technology,” says Chrysler, noting the recent locations of several mission-critical facilities in New Albany from such companies as TJX and Nationwide.

For the record, the regional economic development coalition Columbus2020, just launched last year to serve an 11-county area, recorded the Bob Evans project as one of many expansion/retention successes among the area’s impressive list of projects early this year from such companies as scale maker Mettler Toledo, logistics firm Exel and food packaging firm Pactiv. Jennifer Chrysler gives Columbus2020 a lot of credit.

“They’re doing a very good job of helping each of our communities to attract business from outside the state,” she says, noting that a rising tide of project activity for all means less likelihood of conflict between communities. “We have a great relationship with Columbus despite some mixed feelings about this one project. We probably always will have a great relationship with Columbus, and continue to work together to best market ourselves as a region.”

An artist’s rendering of Bob Evans Farms’ forthcoming new headquarters campus in New Albany offers glimpses of a company as focused on the future as it is on its farm-centered past. 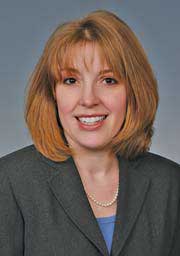