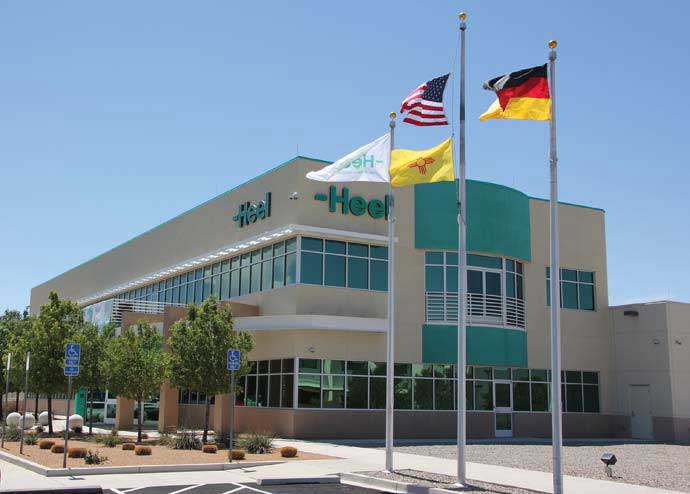 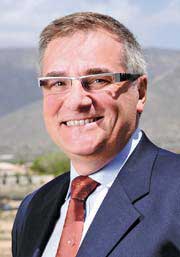 ourists and retirees aren’t the only people enjoying fun in the sun in the southwestern U.S. these days. High-tech companies serving the hospitality industry and other sectors are seeing rays of hope in the desert too.

“I see this area becoming a miniature Silicon Valley,” says Scott Garrison, CEO of Las Vegas-based LINQ360, a rapidly growing company that serves the technology needs of firms in the gaming and hospitality industries.
In fact, an exodus of high-tech companies from California has turned Arizona, New Mexico and Nevada into the new Technology Triangle of America.

“We will be hiring more employees and taking more space here in Las Vegas,” says Garrison, whose firm has 8,500 sq. ft. (790 sq. m.) and just signed a lease for 8,500 more sq. ft. in the gambling mecca of the world. “When people think of Vegas, we get a bad rap. People think only of the Strip, but we are so much more than that.”

An influx of technical talent is transforming Nevada, he says. “I am done opening companies in California,” notes Garrison. “We are very close to Silicon Valley. There is no reason why we cannot become the next tech hub in the United States.”

Garrison is doing his part to build that tech hub, launching the LINQ360 Innovation Center Powered by Microsoft in Las Vegas. “We were playing golf one day here in Vegas with the head of the Microsoft travel organization,” he says. “We finished playing golf and said, ‘Wouldn’t it be great for Microsoft to have an innovation center in Las Vegas in the hospitality sector?’ So we built one. We opened on March 4 with 14 members. Today we have 21 members.”

The roster of companies at the Innovation Center is growing. Qvew, a mobile technology and social media networks firm, is relocating from Santa Barbara, Calif., to incorporate in Nevada with offices at Garrison’s center.

“We ended up with a client in Las Vegas called Precision Finance,” says Eric Sanchez, founder and CEO of Qvew. “Their ad agency introduced me to Scott Garrison. He introduced me to people at Microsoft, and they really liked the digital communications tool that we developed for the hospitality industry. It just made sense for us to move to Vegas.”

Such movement is making sense for a lot of companies these days. Somer Hollingsworth, president and CEO of the Nevada Development Authority, says, “The resort industry is starting to come back. The number of tourists is going up. Room rates are starting to go back up, and these trends are driving a lot of companies to come here. We are seeing Vegas start to come back.”

Garrison says this movement is only the tip of the iceberg. “We are starting to see businesses from all over the world show an interest in us,” he notes. “In our next phase, we are starting a business accelerator. We will be starting up companies from right here in our Innovation Center. We will be bringing in companies in all stages of growth. We are working with the University of Nevada Las Vegas and we are creating a partnership with them to grow companies in the field of hospitality and gaming technology.”

Since opening in March, says Garrison, his firm has entertained visitors from China, Australia and other nations. “Someone is coming in today from an Indian casino in Washington to see what we are doing,” he says. “In many cases, they are coming to us from other states because of business climate issues. Taxes are a big issue for companies in California and Washington; that is one reason they are considering a move to Nevada.”

Sanchez says that Nevada rolled out the red carpet to welcome Qvew from California. “It helped that Nevada has become very friendly to startups like us,” he says. “We are getting a lot of support from NDA. They are holding our hand to help us every step of the way. The governor has been very helpful to us too. All the little things that are very difficult to do in California have been very easy here.”

Sanchez says that Qvew will grow to 20 employees in Nevada by the end of 2012 and then to 70 workers in two years. “UNLV has a very strong hospitality department. There is a lot of focus on technology there,” he says. “The governor’s office is helping us with training dollars, and being connected with LINQ360 will only help our company grow.”

Like Las Vegas, Albuquerque is rapidly emerging as a technology hub in the Southwest as more companies find greener pastures for growth in New Mexico.

Thierry Montfort, president and CEO of Heel Inc. in Albuquerque, says that his homeopathic medicine manufacturing company thrives in New Mexico because of the skill sets of the local work force.

“We need to attract specific skills for the work we do, and we are able to find those talents right here in Albuquerque,” Montfort says. “We are working with the work force commission, the colleges and the universities on this. The diversity of the work force is also a real positive for our company. The Native American influence, the Mexican influence and the Spanish influence all benefit our firm.”

“New Mexico overall is a pro-business state,” he says. “The economic development organization and the chamber of commerce are both responsive to business needs. The quality of business life is very good. Traffic is very light. Typical commute times are only 15 to 20 minutes. That means there is less stress, and if there is less stress, there is less tension and you produce better results.”

Gary Tonjes, president of Albuquerque Economic Development, says that his community is on a roll these days with high-tech expansions. Vitality Works, a natural products company that makes supplements and nutriceuticals, acquired a former Honeywell factory of 109,000 sq. ft. (10,126 sq. m.) on 122 acres (49 hectares) on the west side of Albuquerque. The firm plans to grow its work force from 58 to 88 by 2014, Tonjes says.

Emerging technology in renewable energy will also impact economic growth in New Mexico, Nevada and Arizona, adds Tonjes. “The SunZia Transmission Line project will be a very robust transmission network to take renewable power out to California,” he says. “It is not a project that is going to get off the ground in 2011, but it is one that has many companies spending a lot of money trying to figure it out. Renewable energy is a main trend now in all three states.”

The SunZia project would cover about 460 miles (740 km.) from Socorro County or Lincoln County near Bingham or Ancho, N.M. to Coolidge in Pinal County, Ariz. SunZia Transmission LLC plans to build and operate up to two 500-kilovolt transmission lines.

The purpose of the project is to transport electricity generated by alternative power resources to Western power markets and load centers. The project would grant wind, solar and geothermal power generation access to the interstate power grid in the Southwest.

In Arizona, recently enacted legislation has paved the way for robust growth in several industry sectors.

Called the Arizona Competitiveness Package, the legislation includes job tax credits of up to $9,000 for each qualifying new job; a 100-percent increase in the electable sales factor for multistate corporations between 2015 and 2018; a 30-percent reduction in the corporate income tax rate, taking it from 6.9 percent down to 4.9 percent; a 34-percent research and development tax credit, one of the best in the nation; and an aggressive acceleration of the depreciation schedule for business personal property.

“We have seen a significant increase in prospects since we signed the competitiveness package in February,” says Sandra Watson, executive vice president and chief operating officer of the Arizona Commerce Authority. “Our portfolio has increased by 350 percent under the governor’s leadership this year.”

From July 1, 2010, to June 30, 2011, the ACA assisted expansion or relocation projects involving 30 companies. Altogether, these projects created more than 10,000 jobs and generated more than $1.3 billion in capital investment in Arizona.

“Gov. Jan Brewer signed the most significant economic development package in the history of our state,” Watson says. “It was developed as a consensus agenda led by the governor in partnership with the private sector. It was designed to improve our economy, encourage job growth and create a business-driven solution that would encourage investment in Arizona. It worked.”

The package captured the attention of many California-based executives, adds Watson. “We have seen about 35 percent of our prospect inquiries come from companies in California,” she notes. “Some are expanding firms. Some are relocations. In addition to California clients, we have seen an increase in international clients, particularly in the fields of aerospace, science and technology, renewable energy, defense contract work, and entrepreneurship.

A case in point is AT Security, which announced on Oct. 3 that it would leave Irvine, Calif., for Scottsdale, Ariz. The security services firm’s headquarters relocation brings $5.1 million in capital investment and 200 high-wage jobs to the state.

“Relocating our corporate headquarters to Scottsdale will allow AT Security the chance to save on cost and increase its ability to put people and military veterans back to work,” said Jacques Davis, president and CEO of AT Security. “I am glad AT Security was able to partner with ACA, GPEC [Greater Phoenix Economic Council], the City of Scottsdale, Southwest Realty and Desert Troon to make this move possible.” 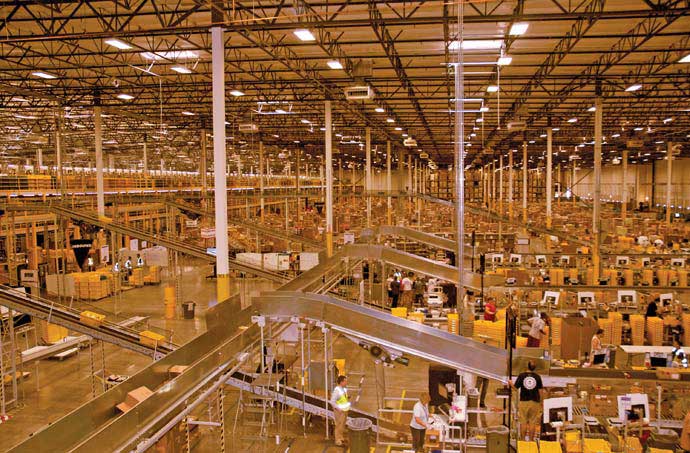 Amazon is investing $150 million and creating 3,000 jobs in Arizona as part of the company’s plan to modernize its distribution system.
Photo courtesy of the Arizona Commerce Authority 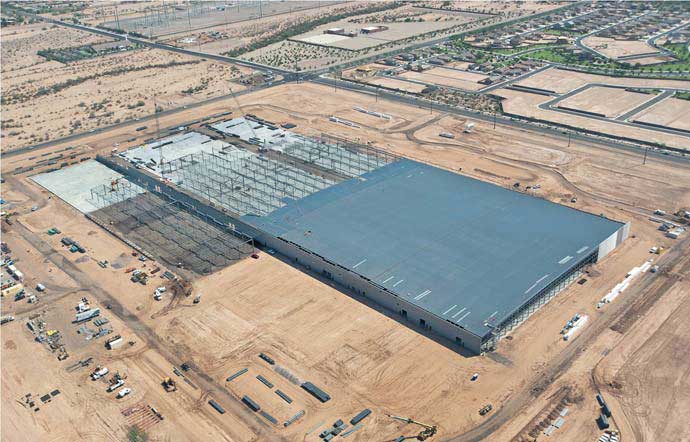 First Solar is investing $400 million and creating 1,200 jobs in Arizona in one of the largest corporate facility projects in the state in recent years.
Photo courtesy of the Arizona Commerce Authority