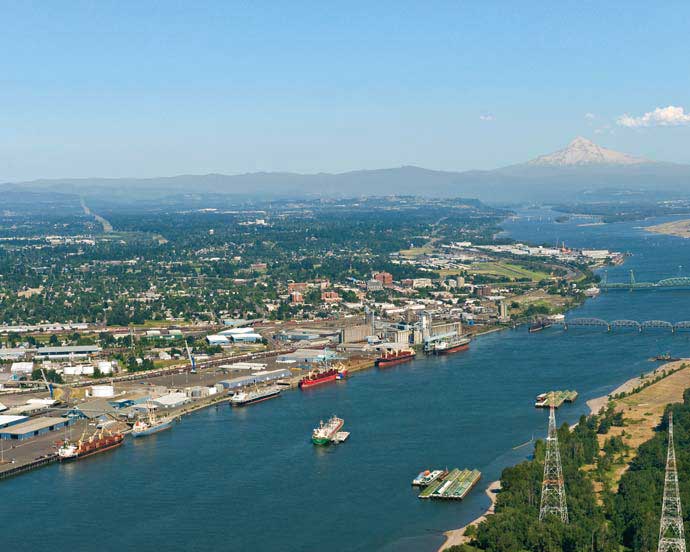 The Port of Vancouver USA (above) worked with state and local officials to put together a compelling incentives package for Sapa Extrusions. Sapa is relocating one of its plants from Canada to the port in southern Washington and bringing 100 new jobs to the region.
Photo courtesy of the Port of Vancouver USA
by RON STARNER
W 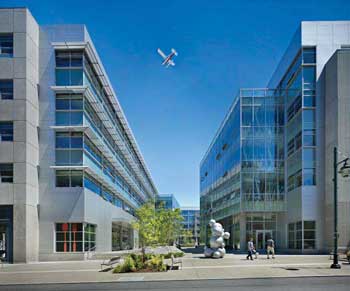 Amazon is adding 6,000 jobs at South Lake Union in Seattle, which is undergoing an historic industrial renaissance.
Photo courtesy of the City of Seattle
hen Sapa Extrusions announced in June that it would expand its presence significantly at the Port of Vancouver USA, the decision sent a strong signal that logistics infrastructure is driving the new wave of corporate growth in Washington.

From Vancouver and Seattle to Spokane and Pullman, the multimodal transportation network of Washington is acting like a magnet to industrial companies needing to reach international markets quickly.

“One outcome of the recession has been a resurgence of interest in Vancouver and the port,” says Curtis Shuck, director of facilities at the Port of Vancouver USA. “We are coming together with a new strategic plan, a new vision and a new focus. As a result, the region of Clark County and Southwest Washington is getting noticed more now. We have invested heavily in our infrastructure, and that is making the port a lot more attractive to corporate investors.”

The Columbia River Channel deepening effort — a 20-year, bi-state initiative with many partners — “opens up a huge amount of new doors for import and export opportunities,” says Shuck.

Sapa is the latest to invest, announcing June 14 that it had signed a long-term lease for a 142,000-sq.-ft. (13,192-sq.-m.) building on port property. Sapa, North America’s largest provider of extruded aluminum profiles, signed a 15-year lease with two five-year options to extend.

The lease enables Sapa to relocate one of its plants from Vancouver, B.C., Canada, to the port in southern Washington and bring 100 family-wage jobs to the region. Sapa is expected to invest US$9.5 million into manufacturing equipment and additional facility upgrades at the building formerly occupied by Panasonic. More than 200 workers were laid off when Panasonic shut down its plant in 2008. The port is investing $1.3 million in the project, which is slated to become operational this fall.

“The Sapa project is a great example of what the port brings to the table,” says Shuck. “We are not just your ordinary landlord. This deal is a long-term relationship. We had a vacant building that proved to be the right fit for Sapa, which already had a presence across the river in Portland. The timing fit and the use fit. They needed more than just the typical landlord doing a real estate deal. They needed a partner that would work with them throughout the entire development process. We formed a special project team that supported Sapa all the way through the design and engineering program and through the entire permitting process.”

Sapa’s seven-inch aluminum extruding press is scheduled to open this month and bring on 100 new workers from the Vancouver area — a region hit hard recently with joblessness.

“With Clark County’s unemployment rate continuing to hover right around 13 percent, our ability to make necessary improvements to a public facility is bringing a major private-sector employer to our community,” said Larry Paulson, executive director of the port.

With 16 plants in North America, Sapa employs more than 550 workers at its plant in Portland. The Port of Vancouver facility will be Sapa’s first plant in the state of Washington.

“Our relationship with Sapa started about five years ago,” adds Shuck. “This deal proves that our business-friendly environment is more than just words on paper. We have established a bond of trust.”

Project Swift Lives Up to its Name


Vancouver isn’t the only Washington community reaping a logistics-driven windfall, however. Across the state, Caterpillar Logistics Services recently selected Spokane as the site of the company’s newest parts distribution warehouse. The 550,000-sq.-ft. (51,095-sq.-m.) facility represents a $40-million capital investment and will result in the creation of 100 to 150 jobs in Spokane.

“This is the largest project I have worked on in the last 10 years,” says Robin Toth, vice president of business development for Greater Spokane Inc. “Community collaboration made this deal happen. We worked with the governor’s office, the county, the city and the airport to land this project. We got a full suite of concessions from our four utilities. And the governor put in about $250,000 to get the client to commit to the project.”

Peoria, Ill.-based Caterpillar cited the work force of Greater Spokane as a pivotal factor in the deal. The new plant is part of Caterpillar’s global supply chain enhancement. The Spokane facility will be the fourth parts distribution center to use Service Parts Management, a global solution that replaces multiple legacy software systems supporting the Cat Parts network. Caterpillar selected Spokane after a comprehensive site search that covered Eastern and Western Washington, Idaho and Montana.

“They felt that a site within about 20 miles (32 km.) of the Washington-Idaho border would be an ideal location,” says Toth. “They will also serve Canada from this location. The final site decision came down to Spokane and the adjoining county in Idaho. There was one site in each county. We emerged the winner based on the total portfolio we put together. The site in Spokane is right off Interstate 90 and it allows them easy access to the ports of Seattle and Tacoma very quickly.”

Speed to market was another critical consideration. “They first came to us on March 20 and then announced the deal on June 23,” Toth adds. “It was code-named Project Swift. They called it that and they meant it.”

State and community leaders held 50-plus meetings during the 90-day period. “It was much quicker than a typical expansion. It probably involved 100 people,” says Toth. “We didn’t even know who the company was until 60 days into the process. Most people did not know until June 23, the day the press release was issued.”

Caterpillar joins a cast of logistics end-users in Spokane. American Tire Distributors announced recently that it will build an 80,000-sq.-ft. (7,432-sq.-m.) facility, increasing its footprint in the community by a factor of 10.

“This has been our biggest year in private investment, economic impact, job growth and tax revenue in a long time,” Toth says. “From an overall perspective, we think that the companies who have made shrewd investments are looking to take advantage of decreased property prices. Municipalities in our area are able to offer concessions in order to increase the tax revenue.”


In Tri-Cities, Wash., around Kennewick, a series of large-scale industrial investments are being driven by the need to reach growing markets in the West and overseas. AREVA Inc., TiLite and the Pacific Northwest National Laboratory are all making huge investments.


“We have been the fastest-growing metropolitan area in the state since 2000, and our economy has been growing at a rate of 1,000 to 2,000 jobs a year for the past six years,” says Carl Adrian, president of the Tri-City Development Council. “Food processing is big in Eastern Washington. We have one of every 10 food-processing jobs in the state. More french fries are produced here than anyplace else in the world.”

Fertile minds are also grown in the Kennewick-Richland-Pasco MSA. Forbes magazine earlier this year named the Tri-Cities area the “11th Geekiest City in the U.S.,” based on the percentage of workers with jobs in science, technology, engineering and mathematics.

“We have made an official request to the U.S. Department of Energy to transfer 1,450 acres [587 hectares] to us for energy development and manufacturing of components and energy production. It will include a 900-acre [365-hectare] mega-site,” Adrian says. “Our goal is to create a clean energy park.”

High-tech corporate expansion projects are proliferating around the state. In Redmond, HCL Technologies announced Sept. 22 that it will spend $4 million on a software development center and hire up to 400 workers over the next two years. In Seattle, sizable expansion investments are coming from Amazon, Facebook, Yahoo, Google and HTC. Leading the pack is Web-based bookseller Amazon, which expects to add 6,000 jobs at South Lake Union in the city.

“Amazon told us that this is exactly where they want to be,” says Stephen Johnson, director of the Office of Economic Development for the City of Seattle. “Developers are telling us that innovative, fast-growing technology companies really love the dynamics of big cities. They want to develop their campuses as urban, not suburban.”

HTC, one of the largest phone producers in Asia, selected Pioneer Square for its new facility in Seattle. “This is Seattle’s first neighborhood and the oldest part of the city,” says Johnson. “This is an edgy kind of environment and it fits their culture.”

Russell Investments, which produces the Russell 2000 and is one of the world’s largest financial firms, relocated last year to Seattle from nearby Tacoma. The company was founded 75 years ago in Tacoma but left the city because the firm said it wanted access to a larger talent pool and an address in “the center of a major Pacific Rim city.” The move brought 900 jobs to Seattle.

“South Lake Union is an extension of our central business district,” Johnson says. “It is just south of downtown and west of Interstate 5. It started as a place where you haul trees and do heavy industry. Ten years ago, it was a collection of auto dealers, furniture stores and warehouses. We had 18 acres [7.3 hectares] of city-owned property that had been accumulated over the years to build a ring highway. That never happened. We traded it with Paul Allen’s company.”

“Amazon was the big driver,” Johnson adds. “The Gates Foundation is there now. We have the world’s largest cluster of companies working in the field of solving global health problems. The lesson we have learned from this experiment is that big cities matter. And big cities that create places that integrate land use, economic development and transportation infrastructure will be the most competitive locations in the future.”