As the People’s Republic embarks on its 12th five-year plan, industrial multinationals plan for much further along than that. 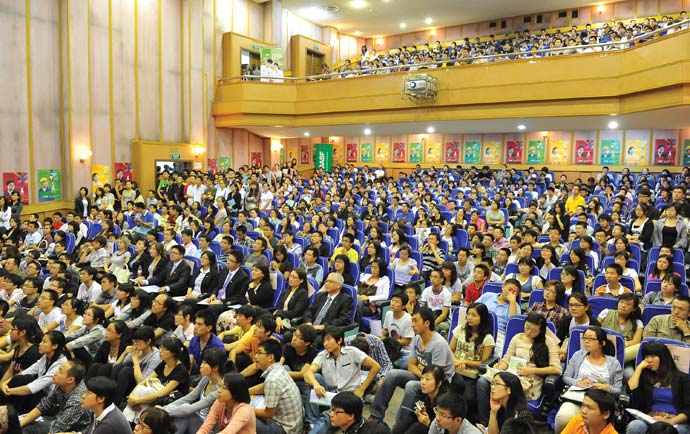 Some 900 students attended the first of eight “campus talks” hosted by BASF at East China University of Science and Technology in Shanghai.
Photos courtesy of BASF
by ADAM BRUNS
D

oes the photograph on this page frighten or inspire? How a company or a country answers that question goes a long way toward explaining the maturing and increasingly integrated global role of China as a production, research, talent and market base.

The image was made by BASF on Sept. 20, 2011, as it kicked off its Campus Talk 2012 series with students at 32 universities in eight cities. The first talk welcomed about 900 students at East China University of Science and Technology in Shanghai. All with an eye toward meeting potential candidates for BASF's GROW program, a graduate trainee program in place in China since 2007 that allows new recruits to experience various positions within the company with clear guidance and mentoring. In 2011, 87 students joined the program, a significant increase from previous years.

"I am pleased to see the changes fresh graduates bring to our teams," said Johnny Kwan, Chairman of the BASF Greater China Country Board. "BASF will continue to grow in China with several new projects under construction and opening of our Innovation Campus Asia Pacific next year in Shanghai." Other cities on BASF's campus tour include Beijing, Guangzhou, Chongqing, Chengdu, Changchun, Ji'nan and Hefei.

A Congressional Research Service paper issued in August 2011 said, "China's economic output of US$3.3 trillion (based on market exchange rates) was one-fourth the size of U.S. GDP ($13.2 trillion). But according to a projection by Carnegie Endowment researchers, China's GDP may be almost 20 percent larger than the U.S. GDP by 2050 ($46.3 trillion for China versus $37.6 trillion for the United States)."

The same report said manufacturing value added per capita has increased nearly six-fold in China since 1990, while stagnating in Latin America and Sub-Saharan Africa. In 2010, China overtook the United States as the world's largest producer of manufactured goods with a market share of 19.8 percent, slightly larger than the U.S. share of 19.4 percent.

China ranked 26th in the World Economic Forum's competitiveness rankings released earlier this fall: "As in previous years, its macroeconomic situation is again very favorable (10th), despite a prolonged episode of high inflation," said the WEF. "China is one of the world's least indebted countries, boasts a savings rate of some 53 percent of GDP, and runs only moderate budget deficits. These factors, combined with good economic prospects, contribute to an improvement of the quality of its sovereign debt far greater than that of the other BRICs. China also achieves relatively high standards in terms of health and basic education (32nd), with positive trends in health indicators and nearly universal access to primary education, which is well assessed in terms of quality."

China ranks high in business sophistication (37th) and innovation (29th), "particularly when considering its level of development," said the WEF. "On a less positive note, a number of challenges persist in the areas of corruption and judicial independence within the institutions pillar (48th). Moreover, the sentiment among businesses is that the country has become less safe over the past three years, resulting in higher costs for protection against diverse forms of crime and violence. Finally, standards of business ethics (57th) and corporate accountability (66th) are below those found in a number of other economies."

The WEF's corporate survey found that the three most problematic factors for doing business in China today are inflation, access to financing and inefficient government bureaucracy.

Among the many BASF facility expansions and upgrades stoking its talent search was the recent addition of new lines at the company's engineering plastic compounding plant in Pudong, China, where new grades of material are now made under stringent Good Manufacturing Practice (GMP) conditions complying with international food contact guidelines.

As the company stated in its 2010 annual report for Greater China, released in summer 2011, "in the past year, BASF has furthered its commitment to China with new investments including a planned facility to produce water treatment chemicals in Nanjing; a dispersions plant in Daya Bay, and a polyurethane system house in Tianjin. BASF began construction of a 400,000 t/a facility to produce MDI (dimethyl diisocyanate) in Chongqing in April, which will become a nexus of industrial development in western China."

The company also continues to grow its epoxy, laminate and polyurethane business as it relates to products ranging from wind turbine blades to automotive parts and components. The latter business is especially vibrant in a land where driving and car ownership are on a rapid growth curve. This summer BASF's regional manufacturing hub in Shanghai committed to doubling production capacity for mobile emissions catalysts with a €40 million (US$54-million) investment. The catalysts are made for automotive, motorcycle and heavy-duty diesel engines. The company has invested €50 million (US$68 million) over the past decade to create an integrated manufacturing, R&D, supply chain management, marketing and sales hub at the Shanghai site.

All in all, driven in part by increasingly restrictive emissions standards set by Chinese authorities, BASF aims to achieve sales of around €20 billion [US$27 billion] in 2020.

Data from China's Ministry of Commerce (MOFCOM) show that FDI increased by 17.4 percent in 2010 over 2009, to $105.7 billion. According to the ministry's Foreign Investment Bulletin in late September, from January through August 2011 the number of newly approved foreign-funded enterprises in China totaled 18,006, up by nearly 7.7 percent year on year. The number of enterprises from the U.S. was down by nearly 5.3 percent, while EU enterprises were up by 8.5 percent and Asian establishments were up by more than 8.6 percent. Some recent highlights:

Also in September, Swedish firm SKF opened its second industrial bearing factory in the Dalian Economic and Technological Development Area, in northeast China, after opening the first in 2006.

In early October, German chemical and consumer goods maker Henkel broke ground for a new industrial adhesives factory in Shanghai. The company said the new plant will be the main adhesives manufacturing site in China and the Asia-Pacific region and upon completion will be the largest adhesives factory in the world, with an estimated annual production of 428,000 tons.

Another German firm, printing services and equipment company Heidelberger Druckmaschinen, in early October announced the opening of the third construction phase at its Qingpu site near Shanghai. The site now employs around 400 people, serving a print products market that company leaders said has more than tripled over the past decade.

Carbon black manufacturer Cabot Corp., based in Massachusetts, has opened a new $20-million masterbatch plant in the Tianjin Economic Development Area, part of what is now the world's largest rubber and specialty carbon black facility

General Motors in September opened the first phase of its GM China Advanced Technical Center (ATC) in Shanghai. It will house more than 300 employees when fully staffed. 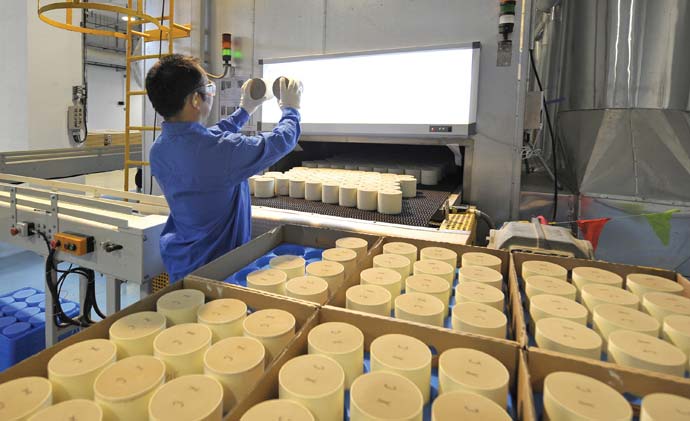