Gov. Dannel Malloy explains how the state is improving its business climate. 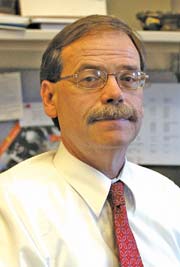 t didn't take long for the Bioscience Connecticut initiative to bear fruit. The US$864-million investment, which was approved in July and will expand research capacity and incubator facilities at the University of Connecticut Health Center, was part of the enticement that led Jackson Laboratory to announce a $1.1-billion, 20-year investment in a new center for personalized medicine and systems genomics.

"We have a foothold in bioscience and we have significantly strengthened our position," Connecticut Gov. Dannel Malloy tells Site Selection. "We are not shy about talking about our own research triangle. Attracting Jackson Lab is a good endorsement."

Jackson Lab's decision to expand in Connecticut follows a nearly two-year effort by the Bar Harbor, Maine-based organization to land incentives for a similar project in Florida. After that effort met with resistance from Florida lawmakers, the project was abandoned. (For full coverage and interviews with Jackson Lab officials about that project, read the Florida Spotlight in the March 2011 issue of Site Selection.)

Mike Hyde, Jackson Laboratory's vice president for advancement, says the visibility gained as a result of its 18-month effort to land in Florida, drew competition for possible future projects. Jackson had inquiries from about 10 local and state entities after it withdrew its Florida plans. Jackson's Florida initiative, which began in Naples and later moved to Sarasota, came up against a tough budget year in the state, and  there weren't enough funds for it to play out, he says.

"People were following the story," Hyde says. "We began to get some inquiries from around the country about the project, most of which we put on hold while we were having discussions in Florida. After the decision to withdraw from Florida, we experienced a real flood of inquiries. We had really not intended to explore another opportunity immediately, but the people from Connecticut were extremely well organized, persuasive and thoughtful and set themselves apart."

Florida's hesitation gave Connecticut an opportunity, according to Catherine Smith, commissioner of the state's Department of Economic and Community Development (DECD).

"One of the senior members of the governor's team read about it in the Bar Harbor newspaper and sent it to me and my team," Smith says. "We agreed together that it would be a good idea to approach them. So we cold-called them. The fact that we had this big investment got their attention."

"They sent some of their critical scientists and lead investors here and met with scientists from the University of Connecticut and Yale as well as some of their business leads, and kicked the tires around our real estate," Smith says. "That meeting proved to be pivotal. Ed Liu, the new Jackson Lab CEO, flew in from Singapore to participate in the meeting. From there, we both felt very good about the synergy. On the scientific side, they were excited. From start to finish, it was pretty quick on their part, especially since they spent two years kicking the tires in Florida. We are extremely excited. Everyone who has met with Jackson Lab has been overwhelmingly impressed."

"We were impressed with the quality of research at the University of Connecticut and at Yale, and in fact, some of our faculty had existing collaborations with those institutions, professional relationships going back years," Hyde says. "In addition, Governor Malloy and his administration had made a substantial commitment to funding biomedical research in the state, both on the academic and the commercial level, as evidenced by the Bioscience Connecticut initiative."

"The promise is to personalize treatments for human diseases, to maximize therapeutic outcomes, to minimize damaging side effects, and to provide significant cost savings in health care delivery," Liu said.

The deal is subject to legislative approval, which could come in a special session held in late October. The proposal calls for the state to provide a total of $291 million in support to Jackson Laboratory Genomic Medicine over 10 years for construction, equipment and operations. The total 20-year capital and research budget for the institute is projected to be $1.1 billion, with Jackson providing $809 million through federal research grants, philanthropy and service income.

Malloy, the former mayor of Stamford who was elected governor in November 2010, has talked about reinventing the state from an economic development standpoint. He conducted a "jobs tour" through the summer and into the early fall, attending 70 meetings, business tours and economic development events.

"At the end of the last session of the legislature, I said it's now time for job creation," Malloy says. "We have handled a disastrous budget situation that I inherited and now it's time to look at longer-term problems. I began a jobs tour and discussion, meeting with business leaders, visiting startups and all the major companies."

Malloy says one of the important things he learned during his tour is that the state needs to use its community college and technical education system to greater advantage.

Malloy says he hopes the legislative jobs session at the end of October will provide the state with tools to make it easier to do business, prepare a viable work force, increase investment in startups and new technologies and enact a number of initiatives aimed at helping small businesses.

"We want to revise our economic development and take a look at tax incentives, grants and loans to make sure it's a modern package compared to other states," Malloy says. "We've already had some success in the legislature."

Malloy got the legislature's nod over the summer for his "First Five" program, designed to attract large-scale business development projects by augmenting and combining the state's best incentive and tax credit programs for the first five companies that create 200 new jobs within two years, or invest $25 million and create 200 new jobs within five years. The program was approved for two years and so far has been given to Cigna, ESPN and Ticket Network, to expand existing facilities in the state. Malloy says the state is in discussions with other companies.

"Having Cigna move its corporate headquarters here was very significant," Malloy says of the insurance giant's move from Philadelphia. "I have made it clear that that we view insurance as a major industry in Connecticut. We have a major outreach to the industry and we are going after it and being aggressive. ESPN, whose headquarters is here, will be adding an additional digital broadcast center. It's a major investment on their part. We want to see ESPN continue to be based here. Ticket Network is a relatively small but rapidly growing company with an interesting use of technology. It was started by a guy [Don Vaccaro] who is a serial entrepreneur."

Malloy says going forward the state will take a far more comprehensive approach to job growth and will compete with every state for jobs. The state will build on its traditional strengths of financial services, aerospace, biosciences and precision manufacturing, while seeking to add other industries.

"We will be going after areas where we can be competitive," Malloy says. "We are probably not competitive in low-value-added goods. But if you are going to build a submarine or a jet engine, there is a good chance you will build it in Connecticut."

Connecticut's energy costs are far higher than the national average. Malloy acknowledges that is a challenge and says the state is taking a multi-faceted approach to deal with the issue.

"We have brought it down about a penny per kilowatt-hour during the last 12 months by backing out charges to lower costs. We will be aggressive about this and will seek a more diverse supply of energy. We are having discussions with our utilities as well as discussions with Canadian provinces about the importation of hydroelectric power from the Churchill project in Labrador."

Insurance giant Cigna was the first recipient of the First Five benefits. The company, which has a campus in Bloomfield, will receive $50 million in economic benefits from the Connecticut DCED and will add at least 200 jobs within the next two years, increasing the company's employment in the state to more than 4,000. The company also plans to make a significant investment in capital improvements and technology infrastructure to upgrade its facilities in Connecticut.

Bloomfield was the original home base for Connecticut General, which merged with Philadelphia-based INA in 1982 and established corporate headquarters for the newly renamed CIGNA in Philadelphia in 1983. The headquarters designation is not expected to materially impact employment or CIGNA operations in Philadelphia.

Ticket Network, an online sports and concert re-selling company similar to StubHub, was the second recipient. Based in South Windsor, the company will retain 292 jobs and create a minimum of 200 new full-time jobs within two years, and possibly up to 600 over the next 10 years. TicketNetwork will receive up to $7.75 million in state assistance.

ESPN, the third recipient, is building Digital Center 2, the 19th and largest building on its Bristol campus. ESPN's commitment will create a minimum of 200 new full-time jobs within five years, with incentives for up to 800, and reaffirms the company's baseline of more than 3,800 full-time employees in Connecticut.

ESPN plans to invest more than $100 million in its new facility, a 193,000-sq.-ft. (17,929-sq.-m.) building to be located adjacent to the existing Digital Center. The new building will greatly increase the company's production capacity and flexibility for new digital media formats and emerging technology. It will house four studios, six production control rooms, 26 edit rooms and more on four levels, dedicated to a variety of U.S. and international studio programming.

The state is providing ESPN with a 10-year, $17.5 million loan from the DECD for the construction of the facility and the creation of at least 200 jobs; and up to $1.2 million to fund a job training grant program ranging from $300,000 for 200 jobs created to $150,000 for each additional 100 jobs created up to 800 jobs. Job training will be developed based on ESPN's needs. The Connecticut Development Authority may also assist with up to $6 million in sales use tax exemptions on capital equipment and construction materials. 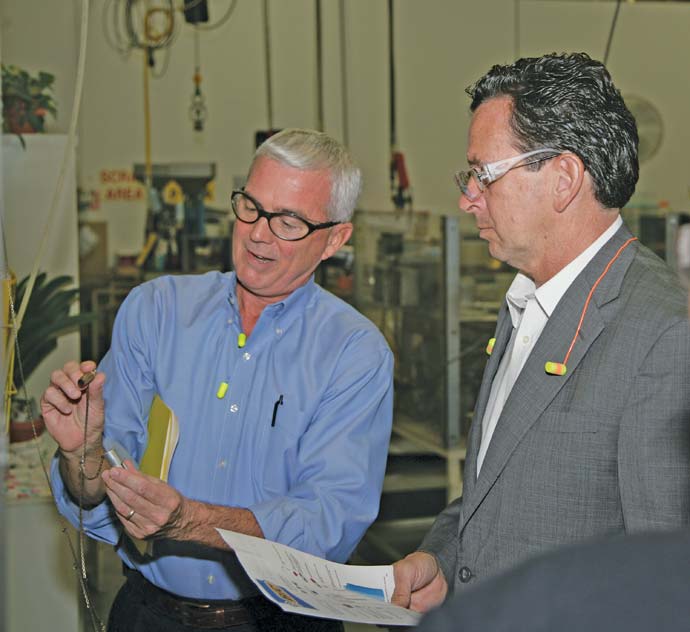 Gov. Malloy speaks with an employee of the BIC Corporation at their factory in Milford during his jobs tour this summer.
Photo courtesy of the Connecticut Governor’s Office