East Coast ports strive to be the fittest for the Panama Canal expansion. 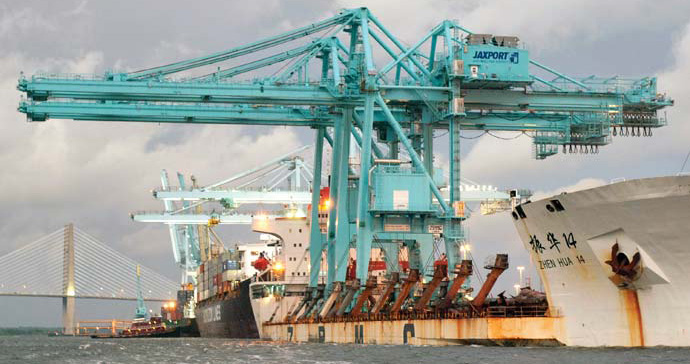 Two new cranes, valued at $10 million apiece, arrive at the Blount Island Marine Terminal at the Jacksonville Port during Labor Day weekend. The cranes stand 165 ft. tall (50.3 m.) and can each lift 50 tons of cargo.
Photo courtesy of the City of Jacksonville
by JOHN W. McCURRY
P 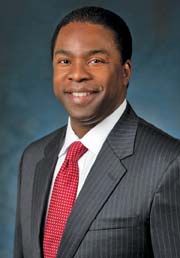 ort cities along the Eastern Seaboard are eagerly anticipating the increased logistics business expected to result when the expanded Panama Canal opens in 2014. Larger vessels traveling through the canal will likely make fewer stops, so competition is intense among the handful of ports that will be able to handle the mammoth 12,000-TEU ships.

"Ports that have the depth now are New York/New Jersey, Baltimore and Norfolk," he says. "Norfolk is blessed because the U.S. Navy is there and they have the depth and will be assured of maintenance for an unlimited time to come. New York has the depth, but the Bayonne Bridge is too low, so they have a different issue to address. Baltimore has the depth, but they don't have the volumes that put them in the same league as Norfolk. The fourth is Miami, which has secured funds from the state to dredge and ready themselves for the 50-foot [15.2-m.] draft and beyond."

Ports in Savannah and Charleston will be competing for dredging money, Carver says. Charleston will likely have an advantage, he says, because it only needs two miles (3.2 km.) of dredging compared to 19 miles (31 km.) for Savannah.

"Both states are feverishly competing for federal attention to study what is needed and to get the funding needed," he says. "Charleston has a fairly deep harbor already and they are able to get vessels from the Suez Canal, which are pretty large 8,000-TEU vessels. In Florida, Miami has been selected by Governor Scott as the port of choice for channeling money for dredging. That will cause Jacksonville to not be ready for the largest vessels, but that doesn't mean these other ports are going to suffer. They just won't be the first port of call — but they can be the second port of call."

Alvin Brown, mayor of Jacksonville, has become a port authority himself among elected officials. He chairs the U.S. Conference of Mayors' Exports and Ports Task Force. He plans to use that platform to make the case for the importance of investing in U.S. ports. He has already made port development a focus in Jacksonville as it targets the growth industries of logistics, transportation and aviation.

"I made the port my top priority for my administration," Brown says. "The port is a $19-billion economic engine in our city. It's already created 65,000 jobs. We want to put Jacksonville back to work and make our port the focus. When you think about Jacksonville, what most people don't know is that we are located at the most western point of the Eastern Seaboard. Within eight hours, we can reach 60 million customers in the Southeast."

Brown acknowledges that the port has some topographical challenges that must be addressed such as a navigational improvement at Mile Point where the St. John River and the Intracoastal Waterway meet. Heavy currents there prevent large ships from calling on the port for a good portion of the day. Brown says fixing that issue would immediately bring 3,500 jobs to Jacksonville. The U.S. Army Corps of Engineers is currently working on a feasibility study for the project.

Brown, who took office on July, plans to create a mayor's ports advisory council to solicit input from the business community. He says he will be working with U.S. Senators Bill Nelson and Marco Rubio, along with regional and local officials, to seek funding for dredging.

"We will be seeking federal dollars and state dollars, and the city will play a role," Brown says. "If we all work together, we will have funding for dredging. For every $1 invested in the seaport, it yields about $6.90 to the state. We want to make sure we are competitive in the marketplace."

As the $5.25-billion widening of the Panama Canal proceeds, the Panama Canal Authority has been renewing partnerships with ports, including extending memoranda of understanding with Eastern Seaboard ports. The Philadelphia Regional Port Authority (PRPA) was among port entities recently renewing an MOU. In 2010, the Port of Philadelphia handled more than 3.6 million metric tons of cargo — a 17-percent increase from 2009.

The PRPA is supporting a large-scale investment to deepen the Delaware River Main Channel from 40 ft. to 45 ft. (12.2 m. to 13.7 m.). Green-lighted by the United States District Court for the District of Delaware in January 2010, the deepening is projected to directly create more than 8,000 new jobs.

Another recent extension was signed with the South Carolina Ports Authority, which owns and operates the Port of Charleston. Charleston currently has the deepest harbor in the region and is already handling large ships with a capacity greater than 8,000 TEUs with drafts of up to 48 ft. (14.6 m.). To accommodate expected growth from the canal expansion, the Port of Charleston is investing heavily through a 10-year, $1.3-billion capital plan. Included in the plan are major upgrades to existing facilities and the construction of a new terminal that will boost port capacity by 50 percent. Simultaneously, business is on the rise, with a 17-percent increase in Charleston container volume in 2010.

An extension was also signed with the Maryland Port Administration regarding the Port of Baltimore, which anticipates the completion of a 50-ft. container berth that is expected to bring larger ships and more cargo to Maryland.

Carver says the projected increased traffic from the Panama Canal is propelling demand for inland ports. One of Jones Lang LaSalle's clients, Florida Inland Port, recently signed a letter of intent with the Port of Miami for a strategic alliance.

Formerly known as Treasure Coast Intermodal Campus (TCIC), the Florida Inland Port is a privately funded, rail-oriented logistics center encompassing more than 4,000 acres (1,619 hectares) in southwest St. Lucie County. It will connect to every major Florida port along the Atlantic Coast, incorporating multi-modal access (rail and highway) to inland locations and offering a range of sites for warehouses, distribution centers and assembly plants. The logistics center will enable shippers to offload cargo from any of Florida's major seaports, store and/or assemble it at Florida Inland Port facilities, and ultimately use rail and highway to complete the import-export cycle. Development of the Florida Inland Port is expected to take place over the next 25 to 30 years.

Over the next decade, the Port of Miami will invest $2 billion in infrastructure improvements. Current approved and funded projects include construction of a tunnel under Biscayne Bay connecting to the Interstate highway system; the restoration of on-port rail service with links to the national rail systems; deepening its channel to 50 ft.; and rebuilding its bulkheads to handle post-panamax ships.

All of these are being timed for the completion of the Panama Canal expansion in 2014.

Portland, Maine — channel is 35' now, with no immediate plans to deepen it further.

Boston (Massport) — channel depth is 40' now; port wants to go to 45' to 50'; feasibility study is underway but not yet completed.

New Haven, Conn. — channel depth is 35' with no immediate plans to deepen it further.

New York/New Jersey (PANYNJ) — depth to container terminals is currently 40'-45'; construction is underway on $2.3 billion federal project to deepen main and access channels to 50' and expected to be completed before end of 2014. Depth to non-container facilities runs between 35'-45'.

Wilmington, Del. — Wilmington's channel (Christina River) is 35'-38' at Mean Low Water with a 5' range of tide and no immediate plans to deepen it further.

Philadelphia (PRPA) — channel depth is currently 40', but project underway to deepen it to 45'. Initial construction began in 2010 but will be several years before completion.

Baltimore (MPA) — currently has a 50' channel, but no 50' deep container berths. New lease with Ports America at Seagirt terminal gives the responsibility to the terminal operator to pay for dredging the berths to 50' by 2014. Berth dredging now underway and completion is slated by the end of 2012.

Norfolk (VPA) — Virginia Ports Authority is currently the only U.S. Atlantic port that has 50' depths all the way to the dock. The Corps has authorized their channel to 55' and a general reevaluation report (GRR) is under way to go to that depth.

Wilmington, N.C. (NCSPA) — channel is currently 42'. Port wants to go deeper, and a feasibility study is getting underway for Wilmington Harbor.

Charleston, S.C. (SCSPA) — main entrance channel is 47' and harbor channel is 45' deep at low tide. The USACE completed a reconnaissance study in July 2010 determining federal interest in further deepening the navigation channel, which was a key funding to begin the feasibility study provided in USACE FY2011 Work Plan.

Savannah, Ga. (GPA) — channel is currently 42' deep, but Corps of Engineers will dredge to 48' at a cost of $588 million if project study issues are resolved. Savannah has to be reauthorized in next WRDA because cost now exceeds the 120 percent of authorized cost threshold. There is also pressure from the South Carolina side of the bi-state oversight authority over whether to dredge the river further to 50' to encompass a proposed Jasper County container terminal between South Carolina and Georgia.

Brunswick, Ga. (GPA) — has a 36' navigation channel, with no plans to deepen.

Jacksonville (JAXPORT) — main channel is 40' deep now; port is looking to go to 45' and has a feasibility study underway for an estimated $500 million to $600 million project. A separate project, called Milepoint, which is where the Intracoastal Waterway intersects the St. John's River and where the cross currents restrict vessels to 35' feet of draft until high tide, is under study to reduce the cross currents and eliminate the navigation restrictions.

Ft. Lauderdale/Port Everglades — channel is now at 42' deep and berth depths range from 27' to 44'; port has a feasibility study underway to deepen its navigation channel to 50'.

Port of Palm Beach District — channel is currently 33' deep with feasibility study underway to go to 42'.

Port of Miami — main channel depth is 42'; port has a 50' channel authorized, but all necessary Corps funding is not yet secure for construction. Florida's governor, Rick Scott, has pledged to pump $77 million into the project. The project is currently in the preconstruction engineering and design phase.

Puerto Rico — San Juan channel is dredged to 40', with plans to widen the channel further but no immediate plans to deepen. Fernandina Harbor is dredged to 35' with no immediate plans to deepen. Port of Ponce (aka, Port of the Americas) recently finished construction on a 50' navigation channel and post-Panamax container berth as part of an $84.4-million government-funded expansion, giving the port an annual container capacity of up to 500,000 TEUs.