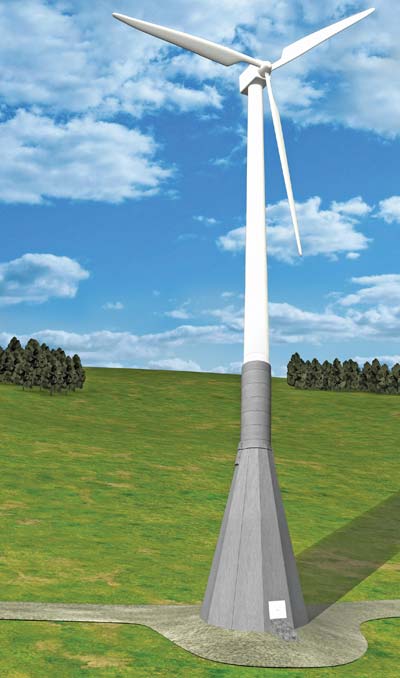 Concrete specialist Tindall is venturing into the wind energy sector with the development of bases for wind towers.
Image courtesy of Tindall Corp.

echnology is pushing wind turbines higher and putting them into all sorts of new locations, including on top of skyscrapers, data centers and big-box retailers. Two companies pushing wind power innovation have independently selected a new industrial park in Newton, Kan., for new manufacturing facilities.

Newton, which is about 25 miles (39 km.) north of Wichita, was selected for its location in the middle of the U.S. "wind belt," Palumbo says.

"We wanted to make sure the logistics part of the equation for our products was taken care of," Palumbo says. "Access to rail is important because we intend to ship a lot of our products by rail. We will have access to both Union Pacific and Burlington Northern [BNSF]. We will be trucking inbound raw materials. Logistics is a big deal for us."

Tindall's location hunt was handled internally and from the top.

"Our owner William Lowndes is a pretty hands-on guy," Palumbo says. "He has taken an interest in this entire product development and in the site selection for this new facility. He got personally involved here and identified the general region. We didn't look in just Kansas. We looked at several states around there and zeroed in on the communities that might meet our needs. Mr. Lowndes was involved in it every step of the way."

Tindall has set up a pilot line for the concrete bases at its facility in Atlanta, Ga.

"We will do some production at our plant in Atlanta until we get the new plant in Newton under construction," Palumbo says. "Once we get a backlog built up that we are comfortable with, we will break ground in Newton. We expect to do that in the next 12 months."

The Newton plant will be built in two phases, with each phase employing 200. Tindall purchased 230 acres (93 hectares) in the park for the project. The plant will be dedicated exclusively to making the wind tower product, known as the Atlas CTB.

Palumbo says the concrete base will allow for the creation of a hybrid wind tower, which in turn will allow for taller towers that will be more efficient and produce more power due to the higher winds at the higher altitude. He believes this will be the future of wind towers in the U.S. and beyond. Customers for Tindall's product will be a mix of wind farm developers and wind turbine manufacturers, he says.

"The wind industry started out with towers in the 40-meter range in the early days, and as they have developed the technology, they have been able to get the towers to 80 meters and soon to 100 meters," Palumbo says. "There is some economic limitation to being able to get steel towers above 100 meters [328 ft.]. You can't design and build a steel tower that you can ship economically. What has been happening is a lot of development, and we've been one of the privately funded efforts to get higher hub heights. No other company has developed the system that Tindall will be rolling out very soon."

Another new type of wind power technology will also occupy a portion of the Kansas Logistics Park. New Millennium Wind Energy, a company formed in Avon, Colo., in 2008, chose the park for its first manufacturing site. New Millennium plans to produce point-of-use wind turbines made of composites for use on buildings.

"The turbines fit a unique niche," says Bruce Russell, New Millennium's executive vice president. "It's essentially a new technology and it's predicated on putting turbines on buildings. They are lightweight. We have overcome torque and weight issues. These are high-output turbines, and we will have multiple sizes for multiple purposes. For instance, casinos use enormous amounts of power and a lot of them are in windy areas. We are not replacing power on the grid — we will be at the end user."

The turbines, which weigh about 300 pounds, will sit on nine-foot-tall pedestals and will range in overall height from 28 ft. to 36 ft. (8.5 m. to 11 m.). New Millennium selected Kansas because of the state's commitment to wind, he says.

"Kansas has policies, government support and public institution support to really make the wind corridor come alive," Russell says. "It's nice to know that people are of a kindred spirit. You couldn't ask for a better kind of supporting mechanism. We were welcomed not only socially, but they threw things on the table that let us know they were serious. As part of the deal, the city will issue bonds and basically build the building, providing us some breaks on that front."

Construction will begin on the 50,000-sq.-ft. (4,645-sq.-m.) building during the first quarter of 2012. Plans call for an eventual expansion with some of New Millennium's manufacturing partners co-locating in an expanded facility.

Proximity to the aerospace cluster in Wichita was another attraction. New Millennium will seek the same type of skilled labor required in aerospace manufacturing. The company will be working with the National Institute for Aviation Research (NIAR) at Wichita State University on composite-related projects.

New Millennium has a strategic partnership with GKN Aerospace, which has a facility in Wellington, about 30 miles (48 km.) south of Wichita. New Millennium is also looking for sites for three other manufacturing facilities. Russell says these will likely be in Rhode Island, to serve the office building markets of Boston and New York City; St. Louis, which is also home to a GKN Aerospace plant; and Pueblo, Colo., which will serve the western U.S.

"GKN will be a significant partner in composites," Russell says. "Everything else, we will be trying to buy off the shelf. Our total commitment is that everything will be made in the U.S. We will be buying components from other contractors and assembling at the plant."

Between Tindall and New Millennium, all but about 45 acres (18 hectares) of the Kansas Logistics Park's original 500 acres (202 hectares) of Kansas farmland are allocated. Mickey Fornaro-Dean, executive director of the Harvey County Economic Development Council, says she hopes the park, which is a joint county and city project, will eventually expand to between 800 and 1,000 acres (325 to 405 hectares). The park is located between interstates 35 and 135 and provides access to the Watco short-line railroad in addition to Union Pacific and BNSF. She says the park is not necessarily a wind-manufacturing park.

"We aren't limiting ourselves with wind, but we are leading with wind," Fornaro-Dean says.

Nevertheless, if successful, Newton, Kan., could become a wind energy hub not unlike Newton, Iowa, where TPI Composites and other firms have established operations.

"A big factor was that they had a building ready for us," says Mads Fogh Kragelund, site manager for Jupiter Kansas. "We needed to take over the building in a short time frame."

Kragelund says another factor was that manufacturing wages are lower in Kansas than in Iowa or in Florida, where Jupiter also has a facility.

Dutch firm Draka, now part of Italy's Prysmian Group, located a facility in Hutchinson near the end of 2010 specifically to supply the Siemens nacelle factory there. Draka is the eighth-largest cable manufacturer in the world, the third-largest in Europe, and is the main supplier of value-added cable for Siemens Wind in Denmark. 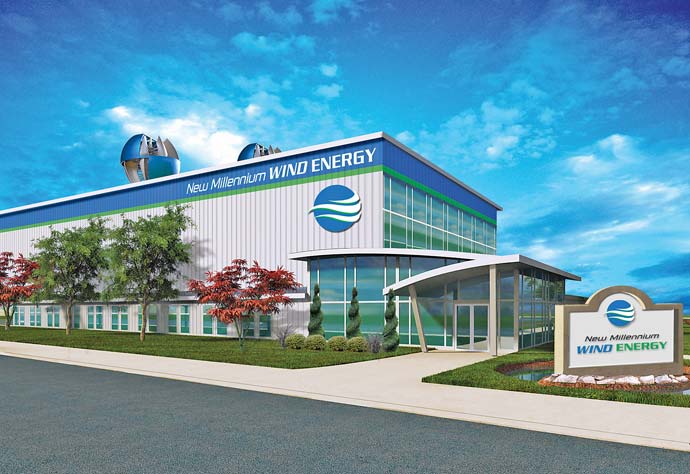