BASF in August signed a memorandum of agreement (left) with Jeonnam Province and Yeosu City to expand production capacity for MDI, a critical ingredient to the polyurethane industry, at its complex in Yeosu (right).
Photos courtesy of BASF
by ADAM BRUNS
P

erched on the southern tip of the Korean peninsula is the city of Yeosu. Known for its ocean ecology, the city of just under 300,000 also boasts an ocean-port economy driven by its own historic port and the nearby Port of Gwanyang, home to Korean giant POSCO's largest steelmaking complex in the world, as well as the Gwangyang Bay Area Free Economic Zone (GFEZ).

Meshing well with a national focus on sustainability and smart-grid projects, Yeosu next year will host World Expo 2012, under the banner "The Living Ocean and Coast." Infrastructure expansions involving airport and rail are well under way. And South Jeollanamdo Province's first foreign school is scheduled to open one year from now.

The expo's vision statements talk of a post-industrial model citizen called the "seatizen," but current project activity points to model investment behavior on the part of major industrial multinational citizens, including petrochemical investments in the past two years from LG Chem, Honam/Mitsui and GS Caltex, and a US$72-million expansion announced in June by BASF.

The German chemical giant signed a memorandum of understanding to expand its facility making MDI (diphenylmethane diisocyanate), an important raw material for the polyurethane sector. The investment by BASF and other companies will increase MDI capacity from 190,000 tons per year to 250,000 tons per year, and create 40 jobs in the process. A separate MDI capacity expansion by KUMHO Mitsui in Yeosu will raise that plant's capacity to 200,000 tons per year by the end of 2012.

"This investment will help us secure reliable supply to our customers not only in Korea, but also throughout the Asia Pacific region," said Wayne Smith, president of BASF Polyurethanes. "It demonstrates our strong commitment to the polyurethane industry and to supporting our customers' dynamic growth."

"According to our Asia Pacific Strategy 2020, we will invest €2.3 billion [US$3 billion] in the Asia Pacific region between 2011 and 2015," said Albert Heuser, president, market and business development Asia Pacific for BASF. "With this investment we are supporting the plans of Jeollanamdo Province for rapid and sustainable development. At the Yeosu site, we are producing products that help our customers increase energy efficiency and lower carbon emissions."

BASF's Yeosu site was established in 1998, was designated a foreign investment area in 2000, and currently employs 280.

As with its aims in China (see p. 882), BASF's interests in Korea go well beyond physical plant, and into the very business infrastructure of the republic. That's why the company hosted the Global Alliance Project Series (GAPS) conference in late August at Korea Trade-Investment Promotion Agency (KOTRA) headquarters in Yeomgok-dong. At the conference, BASF Venture Capital GmbH presented its business strategy and collaboration plans to Korean companies and institutes focusing on chemistry-based new materials, technologies and system solutions related to OLED, nano-technology, graphene, lithium-ion battery and other technology areas.

"There have been many inquiries from global chemical corporations on launching their businesses in the high-tech electronic materials field in Korea," said Hong-cheol Ahn (Hank Ahn), Invest Korea commissioner of KOTRA. "Through the GAPS program, we hope to develop cooperation between multinational companies in this field and many small but strong Korean companies." Over 200 representatives from interested companies and research labs in Korea attended the conference.

According to figures released this summer, FDI pledges for the first six months of 2011 gained 23.8 percent year-on-year to total $5.37 billion.

In the transportation infrastructure arena, in August the Yeosu Gwangyang Port Authority (YGPA) was officially launched. "It will help the GFEZ's Gwangyang Port and Yeosu Port grow into one of Northeast Asia's top 10 international logistics ports and lay the foundation for vitalizing the local economy of eastern South Jeolla Province including the GFEZ," said an official release. The new authority will be led by Lee Sang-jo, president of the Korea Container Terminal Authority.

According to the government, the port authority structure will have more leeway than the container terminal authority does to seek out various financing and partnership arrangements, and to step up marketing.

Among the latest projects in the area is the Hwanggeum Industrial Complex, planned by the GFEZ in Hwanggeum-dong, Gwangyang City, but "slowed by difficulties concerning reclamation of shared waters." Meetings have been ongoing through the summer to resolve those issues. Eventually, the complex, which covers 1 sq. mile (2.6 sq. km.) of land and sea, is to see half its area developed by 2015 in such fields as primary metals, metal processing, transportation equipment, and machinery and equipment.

The heritage of the Gwangyang area goes back to Stone Age villages. Yeosu, meanwhile, was the first port in the province to open to foreign trade, in 1923. It also was where Admiral Yi Sunsin in 1592 constructed turtle-shaped battleships to repel an invasion by the Japanese. Hence the new slogan of the united ports: "Using the sea for prosperity instead of national defense."

That prosperity is expected to be tinted green, and not by seaweed.

"Low carbon, green growth" was proposed as the country's new development strategy in August 2008 by President Lee Myung-bak. Plans were quickly put in place to support green-industry growth with laws and incentives. Korea aims to rank as one of the world's top seven leading countries in green growth by 2020, the year by which it hopes to have reduced greenhouse gas emissions by 30 percent. "From September of this year," said a government release this summer, "nearly 500 firms will begin working towards their reduction goals through the national greenhouse gas and energy management system."

According to the government, the number of venture start-ups in green industries has risen more than 40 percent since 2009, with nearly 800 businesses registered in 2010. "The government's green certification system, introduced in April last year, has certified more than 400 cases of green technology, projects and firms."

Investment in R&D, green and otherwise, continues to be a strong point in Korea, which ranked third in the world in 2010 in its ratio of total public and private R&D spending to GDP, having raised that total by more than 15 percent from 2009. Korea's private sector accounted for 72 percent of the country's total R&D expenditures of 43.85 trillion won (US$37 million). The nation is home to more than 345,000 researchers among its more than 48 million people. 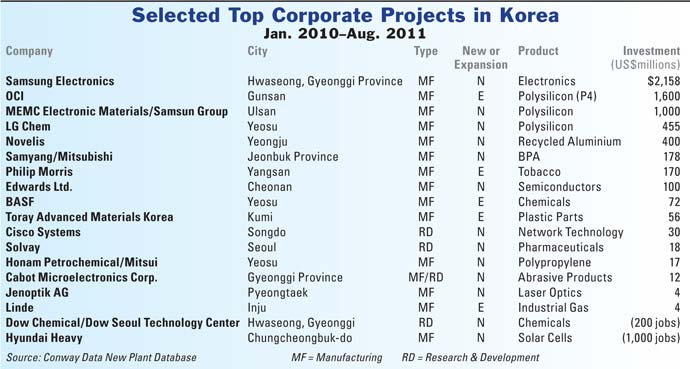