assachusetts-based Blu Homes, which employs approximately 90 people at its sole plant in western Massachusetts and offices in Boston, Ann Arbor and San Francisco, will nearly double its payroll by opening a new 250,000-sq.-ft. (23,225-sq.-m.), 80-employee manufacturing facility on the historic naval base on Mare Island, in the Bay Area community of Vallejo, Calif.

In a turnaround from the trend, Blu, a maker of prefab architect-designed homes, turned around from Nevada to consider the Mare Island location after talking to Tom Steyer, co-chairman of Californians for Clean Energy and Jobs, and founder of Farallon Capital Management.

"Tom made a very persuasive case for integrating Silicon Valley's talent for developing and supporting innovation with the industrial strength of communities like Vallejo," said Bill Haney, president of Blu Homes. "And with the commitment of Lieutenant Governor [Gavin] Newsom and Tom Sheaff's extraordinary team at Lennar Mare Island, we were able to find a fantastic location in the Bay Area." 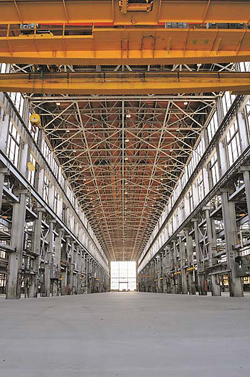 Blu Homes' operation will be housed in the former Building 680 on Mare Island.
Photo courtesy of Lennar Mare Island

"Blu Homes' focus on innovation and environmental responsibility makes the Bay Area the perfect choice for their manufacturing facility," said Steyer. "If Blu's production facility expands as planned, hundreds of green industrial jobs for Californian workers will be created over the next few years."

Originally occupied by the Patwin people thousands of years ago, Mare Island was the nation's first naval shipyard on the West Coast, established in 1854 and ultimately closed in 1996, having built or overhauled hundreds of ships and submarines. Lennar Mare Island's portion of the 5,000-acre (2,024-hectare) island encompasses approximately 650 acres (263 hectares). Included in the Mare Island Reuse Plan are 1,400 homes and roughly 7 million sq. ft. (650,300 sq. m.) of commercial and industrial space. The mixed-use, master-planned community is being developed through a public/private partnership between the City of Vallejo and Lennar Mare Island, LLC.

Blu Homes said in May it had raised $25 million in private investment capital since its founding in 2007, and its homes were going up in 12 states and a handful of other countries. Its other plant in East Longmeadow, Mass., just opened in June 2010.

Blu Homes range in price from $70,000 to $275,000. Blu's customers begin the homebuilding process by customizing their own homes for free online and in 3D. After selecting from a wide variety of designs, floor plans, interior design palettes and appliance packages, homebuyers are able to visualize and receive pricing information for their new home in real time.

Blu then builds each home with precision tooling, trained craftspeople and structural steel frames, which not only hold up well in various weather conditions, but allow "spacious, light-filled floor plans with widths of up to 34 feet, and ceiling heights reaching 16 feet." The factory building environment virtually eliminates concerns over mold and other allergens, which are common issues in the traditional site-building process.

After leaving the factory, Blu's homes are put up on-site in one day and completed in less than two weeks. The timeline on Mare Island will be nearly as fast, relatively speaking, with the facility due to open in late October and the first homes to be produced by year's end. The operation will be housed in the former Building 680, where environmental remediation was completed last year.

‘They Were There Last Time We Checked’ hose who see government employment as an inverse business climate barometer may find morsels of meaningful data in the Annual Survey of Public Employment and Payroll released Aug. 30 by the U.S. Census Bureau. But just as with FDI and other data working its way through the federal labyrinth, there is a lag factor: The data was compiled for the month of March 2010.

"The 90,740 state and local governments across the country had 16.6 million full-time equivalent employees [FTEs] in 2010, 203,321 fewer than were employed in 2009," according to Census Bureau estimates. More than half worked in education. Part-timers also decreased slightly, to 4.8 million.

Most state governments saw increases in their part-time work force, led by Wisconsin, which added 5,063 part-time employees, followed by California with an increase of 2,836 state employees. Florida saw the largest loss in part-time employment (7.5 percent), with a drop of about 3,555 employees. ctober 6 saw the opening of DuPont's new $500-million, 200,000-sq.-ft. (18,580-sq.-m.) Cooper River Kevlar plant (pictured), just north of Charleston, as well as the announcement that Continental Tire the Americas (CTA) will construct a $500-million plant in Sumter County, just east of Columbia, that will employ more than 1,600 people. CTA will also invest $4 million and add 80 jobs at its headquarters in Lancaster County, just south of Charlotte, where the company already employs nearly 350.

For the full story, including insight into potential business links between the two megaprojects, read the Online Insider exclusive "Going Up?" at SiteSelection.com.

hile complaints of unfair trade and currency practices by China continue to resound, an August release from the US-China Business Council (USCBC) showed that out of 435 U.S. congressional districts, 333 districts had higher growth in exports to China in 2010 than they did to the rest of the world.

"In 2010, exports to China rose 32 percent — faster than export growth to any of America's top-five export destinations," said USCBC Vice President Erin Ennis. "China is our third largest export market and is growing faster than many of our other major destinations for American manufactured goods and agriculture products. The nearly $76-billion increase in exports to China during 2000-10 exceeded growth in every other market for U.S. goods and farm products. U.S. exports to Canada and Mexico rose $69.3 billion and $52 billion, respectively. Brazil was a distant fourth with just a $20-billion increase."

Here are the top U.S. state exporters to China in 2010, ranked by value of exports: ased in part on the assertion that the U.S. economy "is about 66-percent driven by consumer spending that takes place close to them," supply chain advisory firm Chicago Consulting says therefore, "many businesses' actual demand patterns closely parallel the U.S. population. Even many industrial products will have a demand pattern closely resembling the U.S. population pattern."

Hence the firm's recent release of its annually updated list of "The 10 Best Warehouse Networks," based purely on newly available U.S. Census population data and no other factors. Over the 15 years Chicago Consulting has assembled the list, the population has shifted toward the Southeast and Southwest, reflected in microcosm in the state of Indiana, where the "single best warehouse location" has migrated over a 10-year period from Terra Haute to Bloomington to now Washington, which is just over 40 miles (64 km.) from the nearest Interstate (I-64 to the south) but is along the route of the long-debated and slowly developing I-69 corridor. site adjacent to its complex next to the ConocoPhillips refinery in Westlake, La. (pictured), has been chosen by Sasol as the location for a proposed new gas-to-liquids fuel production operation that could entail an investment as high as $10 billion. Read about the germination of this project and another multibillion-dollar project in Louisiana from Cheniere in the Site Selection Energy Report story, "In Fact It's a Gas," at www.siteselection.com.