New campuses in Omaha reflect consideration
of the people who will work at them. 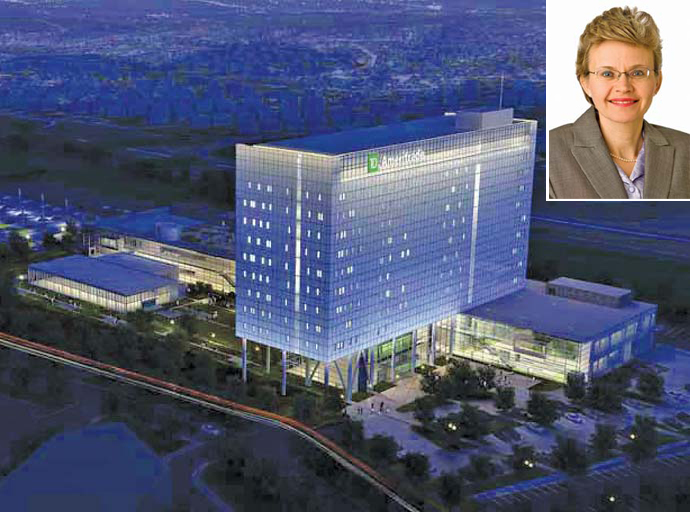 TD Ameritrade’s new headquarters, in Omaha’s Old Mill neighborhood, will be the tallest and most visible building outside the city’s downtown when it is completed in 2013. The company’s many Millennial workers will appreciate its sustainable-design features, predicts Karen Ganzlin (inset), chief human resources officer, who oversees corporate real estate.
Images courtesy of TD Ameritrade
T 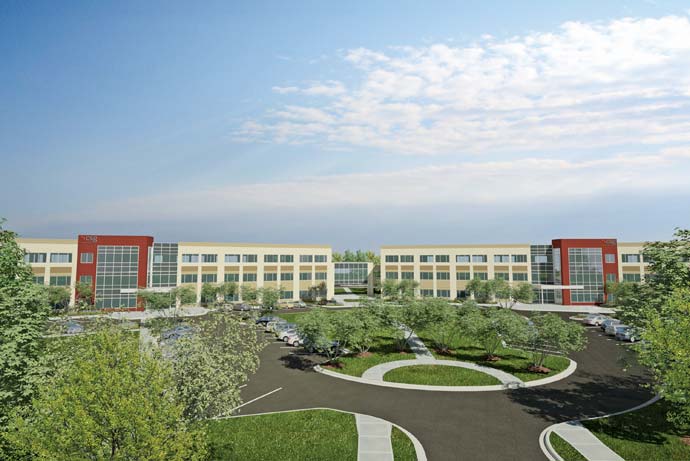 The national brokerage firm occupies three buildings in the Old Mill area west of downtown, and since that location works well for employees, Old Mill was chosen as the location of the new campus. The site will feature a 12-story, 475,000-sq.-ft. (44,128-sq.-m.) tower that is being designed to earn LEED Platinum certification. It would be only the second office building in Nebraska to earn that designation.

"The headquarters and technology building will be the only piece of real estate that we own in the organization — the rest is leased," says Karen Ganzlin, chief human resources officer, who oversees corporate real estate. "So we wanted to invest in an asset that wouldn't depreciate over time and one that we would be very proud of as owners. That led us in the direction of sustainability and LEED Platinum certification. That's very important to the future of the work force. We're all hiring Millennials these days, and things like sustainability and green space are very important to them. Also, we're a national company and a major employer in Omaha, so together with its central location near two freeways this building helps us from a branding and marketing perspective as well. It will be the tallest building outside the downtown core."

Investing in the Old Mill district was a win-win for both Omaha and TD Ameritrade, which was founded in the city 35 years ago. New development had largely bypassed the area in recent years, Ganzlin explains. "It was morphing into a bit of a dead spot, which is unfortunate because it's a good location with a creek, green space and so forth. I think we were future-focused enough to see that we could perhaps turn this into something pretty special."

Employees will move into the new tower beginning in April 2013, but it's not too soon to enjoy the project, which has been under construction since July 2010.

"As we started this project, I knew in my mind's eye what I thought it was going to be, but it's exceeding all my expectations," says Greg Quick, AIA, director of corporate real estate and facilities. "Besides being an architect, I'm also a real estate broker, so I know what location can do for you. Not only did we pick the right location, but this location will make our building a banner — an everyday promotion — for TD Ameritrade. The architecture and signage will enhance that. It's the best project I've worked on, and we can't wait to see it completed."

Green design components being incorporated into the headquarters facility include open workstations with natural daylight and outside views; lower water and energy consumption through use of certain mechanical, electrical, air handling and plumbing systems; recyclable and low-emitting building materials that limit release of pollutants; and several acres of green space adjacent to the building.

"We looked at the different levels of LEED certification and did analysis of what the attributable costs would be for each level," says Lorne Hurov, managing director, TD Ameritrade's real estate division. "At the end of the day we'll pay probably somewhere in the neighborhood of 10 percent more to achieve a LEED Platinum building." There's more capital investment up front, but over time the energy savings will more than compensate for that, he notes.

Omaha has served TD Ameritrade well as the company has grown over the past three decades, says Ganzlin. Its economy is diverse (agriculture, food processing, manufacturing, call centers and business services are among the main sectors) and does not fluctuate wildly, and labor is in good supply.

"We're the only game in town in terms of large national brokerage firms, but First National Bank of Omaha is here, one of the largest, best-run regional banks in the U.S.," she says. "Several Fortune 500 companies are here as well — Union Pacific, ConAgra, Berkshire Hathaway. It's a good market for talent, and it's easy to retain talent here. It's a little harder to get people here, and Omaha is working on marketing what we have to get more people to come. But once people are here, they realize the quality of life — the cost of housing, shorter commutes — is a real advantage."

Not far from Old Mill is the site of business support services provider CSG Systems International's new campus, which is now under construction.

"Our work force is our highest capital, which made it an easy decision to stay based in Omaha," says Damon Barry, senior counsel. The Colorado-based company broke ground in June on a two-building, 208,000-sq.-ft. (19,300-sq.-m.) corporate campus that will open in the fall of 2012. Founded in Omaha in 1994, the company has more than 1,400 employees in the area. It chose the build-to-suit option due to a lack of suitable space on the market in the location and timeframe required, says Barry.

"This location does not change the drive time, on average, at all for our employees," he says. "We don't want this change to be a disruption."