Project flow along the Ohio now pools in big cities even more than in the past.
But the energy industry is fueling big projects in smaller and rural areas as well. 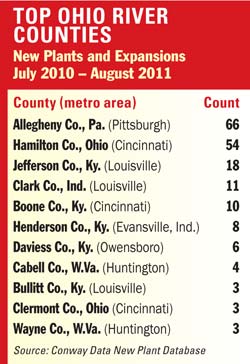 or the eighth straight year we present our analysis of corporate facility growth in every county along the river's banks (Pennsylvania, West Virginia, Ohio, Kentucky, Indiana and Illinois), including the list of top-performing counties shown above. The leaders continue to lead: Greater Pittsburgh, Cincinnati and Louisville. Cracking the top of the list this year are two counties in West Virginia. And a cracker for ethane could make that state's riverbank home to one of the biggest energy projects to spring up anywhere in the U.S. this year.

Shell announced in June it was developing plans to build "a world-scale ethylene cracker with integrated derivative units in the Appalachian region" of the U.S. In the meantime, Bayer Corp. has made it known that two West Virginia complexes it owns — one in Institute, near Charleston, and the other in New Martinsville along the Ohio River — would be ideal locations for such projects.

The cracker, a multibillion-dollar investment, would process ethane from Marcellus natural gas to produce ethylene, one of the primary building blocks for petrochemicals, said Shell. The company's leading derivative option is polyethylene (PE), an important raw material for items ranging from packaging and adhesives to automotive components and pipe. Shell says most of the PE production would be used by northeastern U.S. industries.

Ohio and Pennsylvania are also vying for Shell's attentions. Shell owns and operates four petrochemical crackers in the U.S. at Deer Park, Texas, and Norco, La.

Data released by the American Chemistry Council in late September as part of its U.S. Chemical Production Regional Index showed that the Ohio Valley region led the U.S. in year-to-date percentage increase in chemical production, at 3 percent. An early 2011 report from the Council analyzed the impact of a hypothetical 25-percent increase in ethane supply on growth in the petrochemical sector and said such an increase would generate 17,000 new knowledge-intensive, high-paying jobs in the U.S. chemical industry; $4.4 billion more in federal, state, and local tax revenue, annually; a $32.8-billion increase in U.S. chemical production; and $16.2 billion in capital investment by the chemical industry to build new petrochemical and derivatives capacity.

End users of polyethylene and other plastics are growing already in the Evansville-Henderson, Ind.-Ky., metro area. On the Henderson side, recent project investments have come from Legacy Plastics, Matrix Composites and Sunrise Tool and Die.

On the Evansville side of the river, Berry Plastics is expanding for the third time in two years, adding 120 customer service, finance and general administration positions over the next three years. The company in June said the positions are a result of continuing company growth as well as the consolidation of office locations in Rolling Meadows, Ill., and Minneapolis, Minn. Berry employs more than 2,250, or 15 percent, of its 15,000 worldwide employees in Indiana, where the Evansville-based company got its start in 1967 as Imperial Plastics.

In September, the former Whirlpool campus in Evansville got a positive jolt from Netherlands-based wind turbine blade technology firm Global Blade Technology, whose GBT USA subsidiary will establish its first U.S. office and manufacturing facility in approximately 45,000 sq. ft. (4,181 sq. m.) of space it will lease from The Kunkel Group at what is now called Park41, which consists of 1.2 million sq. ft. (111,480 sq. m.) of space.

The firm will manufacture molds, tooling, prototypes, and other components necessary for customers to manufacture wind turbine blades. Over the next two years, GBT will make a real estate and personal property investment of approximately $3.5 million and create nearly 40 new jobs. The City of Evansville is offering GBT USA a $292,500 three-year low-interest loan through the Evansville Revolving Loan Fund (RLF); $208,000 in Community Development Block Grant Program Disaster Recovery funds granted to the city by the Indiana Office of Community and Rural Affairs; and a 10-year Evansville Urban Enterprise Zone Investment Deduction, with an approximate value of $147,000.

GBT USA plans to establish an additional manufacturing facility in Southern Indiana in the next several years for full-scale production of composite rotor blades for wind turbine generators. Company officials have indicated that this additional facility, which would be located in Evansville but not necessarily at Park41, would require an additional investment of approximately $40 million and create 400 new jobs by 2014. The Indiana Economic Development Corp. (IEDC) has offered GBT USA up to $2.8 million in performance-based tax credits and up to $200,000 in training grants based on the company's job creation plans.

Helping the Process Along

"He also said that we 'get it,' " she says, meaning "we understand how you make decisions. Instead of submitting incentive programs, we said, 'What is it you need, and how can we put something together that meets your needs?' "

Dewey just came into the position, bringing with her a process manufacturing background. "During the first projects I worked, I was very impressed with how fast you can get responses from our state," she says. "They understand this can't go into a black hole."

That applies at the local level too. Debbie Bennett Stearsman, vice president of community development at the Economic Development Coalition of Southwest Indiana, made Dewey aware of the revolving loan program, which had not really been fully utilized in the past few years. "We started realizing we maybe had been too onerous, making it too difficult to loan the money out," Dewey says of the program, formerly administered by the department of metropolitan development. "We're trying to say, 'Let's let the economic development organization administer it, because they're the closest to the projects. That takes another step out.' "

"You're going to see more than just the bulk commodities using the river," she says, "That's an opportunity we'll start to see more of. There's a lot more capacity on waterways." 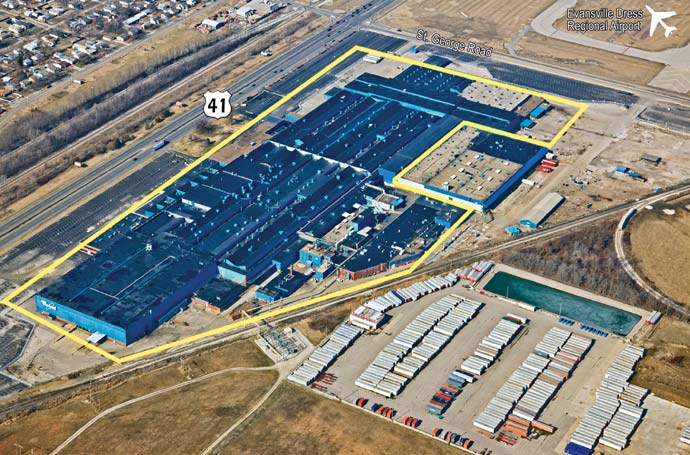 GBT USA will make molds and tooling for wind turbine manufacturers at this
former Whirlpool campus, redeveloped as Park41, in Evansville, Ind.
Photo courtesy of The Kunkel Group 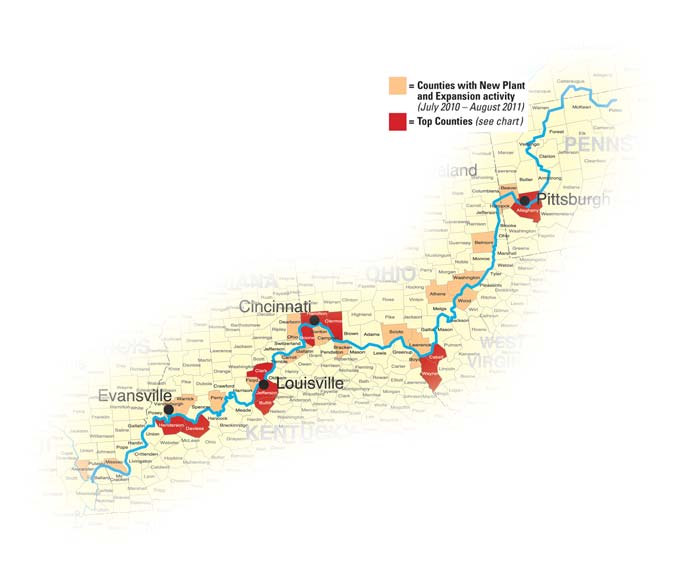