In Our Imperfect World …

What makes the perfect business park? 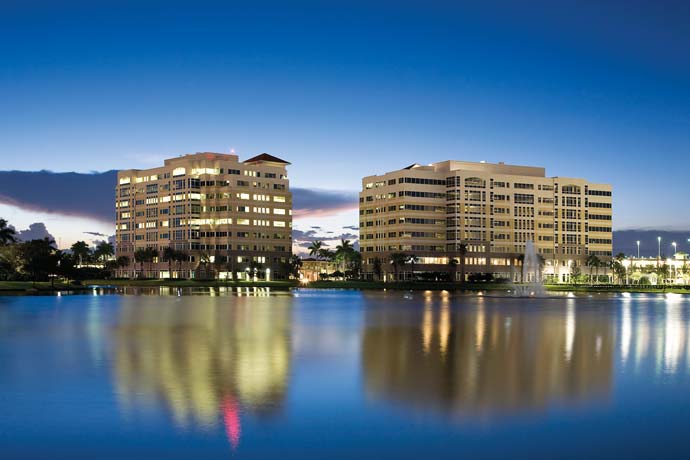 Royal Palm in Plantation is one of several class A business parks in the rapidly growing regional headquarters mecca of Broward County, Fla. The project is a development of Duke Realty.
Photo courtesy of the Greater Fort Lauderdale Alliance
T

here is no ideal business park. The economy continues to struggle, showing slow growth at best. This has been, and likely will continue to be, a significant negative to absorption of business park sites as well as warehouse and office space. This is impacting use mix, design, and location choices. As the economy does begin to improve, what is preferred now will change in part, so be flexible.

Slow economic growth continues to affect site location and design of business parks, as well as the demand for logistics, manufacturing, and office space.

The current economy and market reality as well as these trends will impact site selection decisions. On the demand side, cost cutting measures often translate to consolidation, resulting in fewer but larger facilities. Optimal locations of major distribution centers are based on logistics costs, leading to decisions to locate on major intermodal trade lanes.

Use mix in parks is changing:

How sites are marketed matters more than ever before because of the reduced demand for sites and spaces.

Select members of the NAIOP Research Foundation, Industry Trends Committee, and Industrial Development Forum I contributed to this article.

lues & BBQ are Southern traditions, but they are not complete without Business. A unique facility centrally located in West Tennessee is transforming into a ready-made site for businesses to thrive.Milan Commercial Complex, located at the Milan Army Ammunition Plant spans across 22,000 acres and offers over 1 million square feet of available working space as well as storage facilities for warehousing, distribution or energetics.

Redevelopment began in 1998 and has attracted defense contractors, energetic & industrial manufactures, rail services and a highly specialized motor carrier group. Synergies between tenants can be utilized by companies that locate to Milan.

The Armament Retooling & Manufacturing Support (ARMS) program is what differentiates this site from your typical industrial park. The ARMS program offers prospective businesses the opportunity to locate at eligible facilities, and provides financial incentives for building alterations or upgrades tailored to tenant needs.

Large and small companies benefit by being at Milan. The site is within a fenced perimeter making security a key attractor as well as fire protection and emergency services. Milan is served by CSX and West Tennessee Railroads and is convenient to air, water, and highway connections. Additionally, extensive infrastructure is already established and tenants can utilize on-site specialized services such as industrial x-ray, environmental & metrology labs, test range, and machine shop. In essence everything a tenant may need is only steps away.

For details including information on ARMS incentives contact Milan Commercial Complex at 731-686-6261 or visit www.milancommercialcomplex.com. 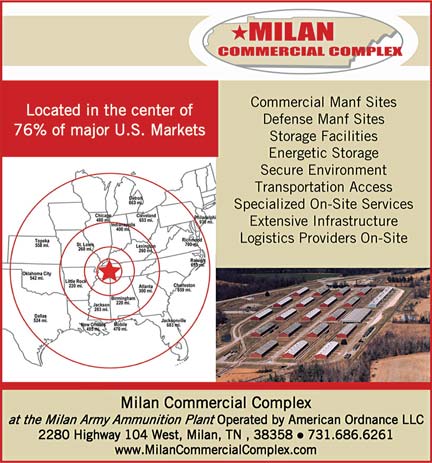 ambridge is located in Isanti County which is one of Minnesota's fastest growing counties. As the county seat, Cambridge is at the center of this growth. Steady growth in population, business, and industry has transformed this thriving, vibrant city into a regional hub for employment, shopping, services, health care, entertainment, and education.

Cambridge has preserved its small-town charm while attracting a diverse and healthy economic base. Its historic downtown supports an eclectic mix of shops, tech start-ups and service businesses all catering to a growing population of 8,111 residents.

One hour from Minneapolis/St. Paul International Airport and minutes from the Cambridge Municipal Airport. St. Cloud's regional airport is 48 minutes west. Cambridge is located on State highways 95 & 65 and is only 13 miles to I-35 and 18 miles to MN 169.

The city-owned Industrial Park is Certified Shovel Ready. It offers parcels from 1.4 to 24.4 acres at competitive rates with all utilities in place and financial incentives to business expansions and relocations.

Learn more about how your business can prosper in Cambridge, MN, by visiting www.opportunitycommunity.com, or call 763-552-3209. 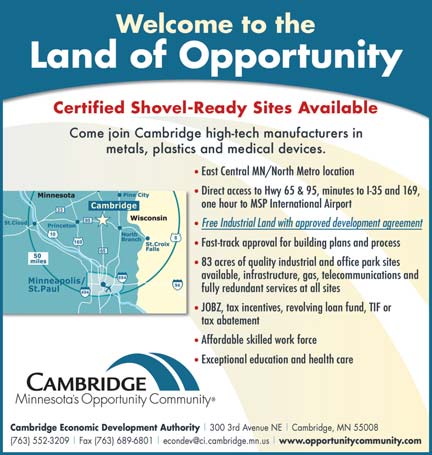 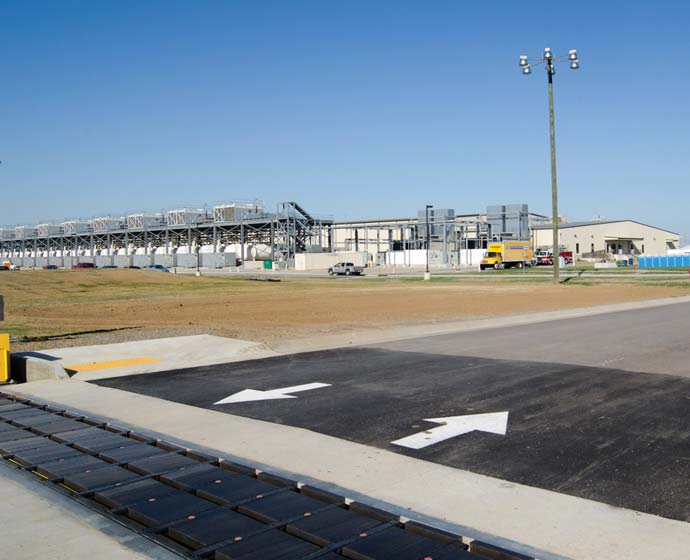 The Google Data Center at MidAmerica reflects the latest in energy-efficient design and uses half the energy of a typical data center.

When MidAmerica's management team tells prospective companies about their suite of competitive advantages, visitors welcome the news that can really make a difference to their company.

Perhaps it is the location. Equidistant from both coasts, MidAmerica is right at the intersection of two major interstates near Tulsa. "When we say that we are at the crossroads of the Wal-Mart Expressway and the NAFTA Transportation Corridor, most people have a pretty good grasp of where that is," said Sanders Mitchell, Administrator for the park. The park is bounded by both Highway 69 and Highway 412; two major four-lane US interstates that can deliver a "same day" logistics punch to nearly one-third of the nation. In addition, lead rails traverse many sections of the park and there's even an on-site Regional Business Airport that is jet-certified for most corporate business aircraft. Just 15 minutes away, an inland waterway port provides barge transportation as yet another option for year 'round convenience.

Maybe it is the cost and variety of utilities to be found on-site. There are two natural gas transport suppliers. The primary electrical provider to the park's industries has its major source of power generation on-site for more reliable service. There are two transmission substations and five distribution substations conveniently located throughout the park. It is a very competitive market for electrical service. Prospects can expect megawatts of savings compared to other locations in the Sunbelt.

Is water important? To major users, it can be a critical element of their operations. At MidAmerica, it can flow in abundance. The park owns both water and wastewater treatment plants. Rates lead the nation in affordability and companies that need a million gallons per day — or more — can be served without problem.

Seeking a skilled workforce? MidAmerica industries enjoy some of the nation's most productive employees. And, to assure that your labor force remains competitive in a global economy, you can keep their skill sets sharp at one of two nationally-regarded on-site training facilities.

Another competitive advantage includes a tradition of helping firms get more money to their bottom line. "We can often help a company reduce operating costs by 20-70% and that's a pretty big deal in challenging times like we have now," said Mitchell. Even MidAmerica's hometown has the dollar-stretching spirit. For several years, Pryor Creek has been listed as among the top ten for low costs according to the quarterly ACCRA Cost of Living Index. Recently, Pryor Creek regained the "Number 1" position in the nation for affordability.

For plant sites, MidAmerica has no shortage of options. Several spec buildings are almost always available. There's a 118,000 square-foot facility that served as a luxury motor coach manufacturing plant for nearly two decades. Two new 30,000 square-foot buildings are also available. Numerous Greenfield sites are offered, too — along with many "BuildNow" shovel-ready sites that enable companies to start construction immediately and avoid all the "red tape and zoning commission" issues. For example, Google chose a BuildNow site for a data center which became operational in September of 2011 as the latest part of their international data center network.

"When we search for a data center site we have very specific criteria such as the caliber of the work force, the right business climate and the infrastructure to support the power and technical needs of our operations. MidAmerica Industrial Park fit the bill and have surpassed our expectations," said Joe Kava, Google Senior Director, Data Center Construction and Operations.

The facility represents the newest in a fleet of highly-efficient Google data centers that uses half the energy of a typical data center. The company already has 106 employees with more to be hired as the data center campus grows.

Founded in October of 1961, MidAmerica is now celebrating it's 50th anniversary. The park has a colorful history with milestones that include a Presidential visit from LBJ and many years of an on-site industrial trade show designed to introduce MidAmerica firms to the local community.

MidAmerica is governed by a board of trustees to oversee all business operations. The park has accrued a "blue chip" roster of over 80 companies that includes divisions of many Fortune / Global 500 firms. It has been recognized by leading economic development publications as a top-ranked expansion or relocation site for growing companies and has been named as a "Certified Industrial Park" by the Oklahoma Department of Commerce. Additional details about MidAmerica can be found on their website: www.maip.com. 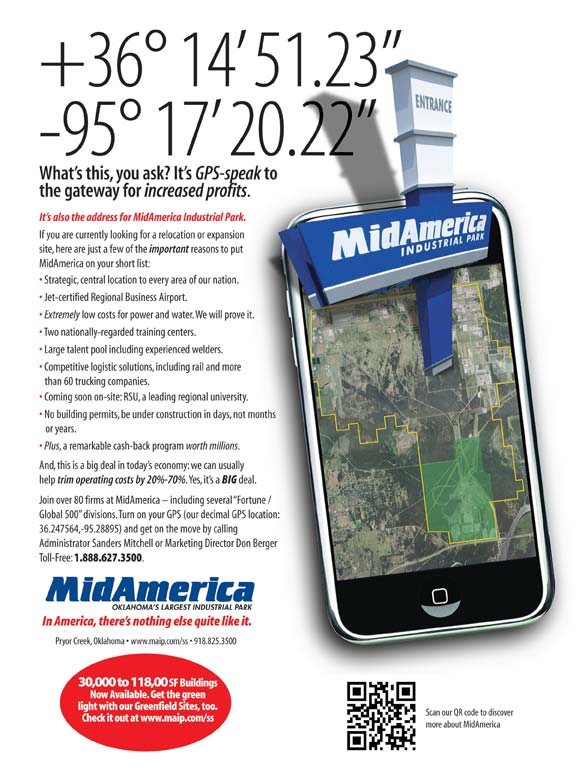 Building Douglasville’s Economy One Business at a Time

The City of Douglasville Development Authority (CDDA) is the incentive source for companies locating or expanding in Douglasville. Douglasville's pro business approach rewards companies making a commitment to new jobs and investments in the City. The following project incentives are available:

The CDDA expedites the issuance of building permits to within 5 to 10 work days of the application being filed. 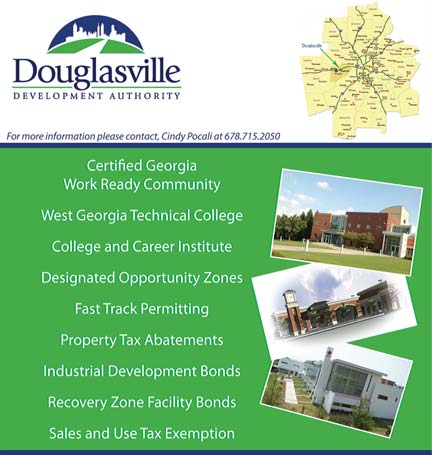 he Tucson Airport Authority has nearly 5,000 developable acres near the Tucson International Airport, with several sizable parcels "shovel ready," complete with utilities and other infrastructure improvements in place. Available opportunities are for both on- and off-airfield, airfield taxiway access to runways, are convenient to Interstates 10 & 19 and rail lines. In addition, TAA is marketing low-cost industrial and warehouse space at the Tucson Industrial Center (TIC), and office space at several properties.

For a complete list of properties and their attributes, visit flytucsonairport.com, facility and land leasing.

TAA hopes to maximize land development resources and leverage Tucson International Airport's position as a major economic development hub in the region, not only in the movement of goods and people but as the backbone for the region's target industries. In addition to new development opportunities, TIA's existing tenants are starting to plan business growth and expansion as signs of economic recovery continue to boost confidence.

To learn more about commercial development opportunities, contact Mary Davis at (520) 573-4840, or by email at mdavis@tucsonairport.org. 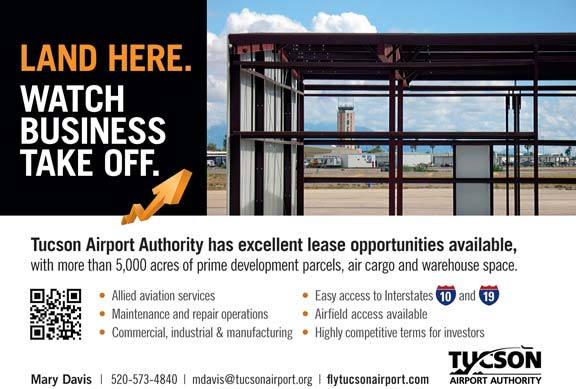