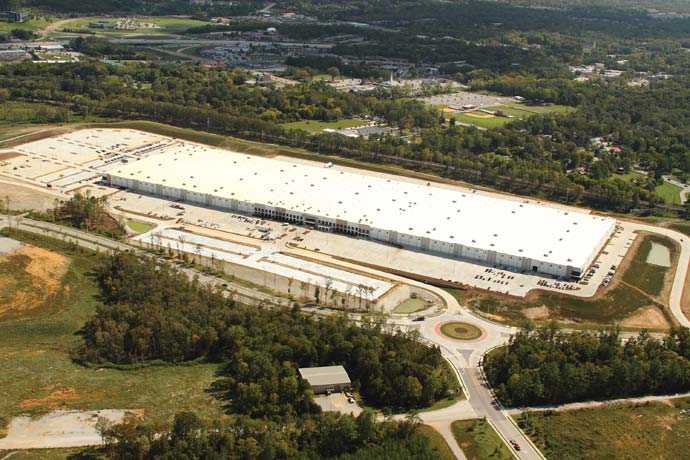 ennessee reached a new sales tax deal with Amazon.com in October which figures to more than double the company's original employment goals in the state. The online retailer will maintain its previously announced distribution centers in Cleveland, Chattanooga and Lebanon and will add 2,000 more jobs at other sites to be determined. Combined, the projects will account for 3,500 jobs and an investment of US$350 million.

Under the agreement, which will require legislative action to implement, Amazon will also begin to collect Tennessee sales taxes beginning Jan. 1, 2014, unless a national solution is addressed before that time.

Currently, Tennessee law requires that consumers pay use tax to the Tennessee Department of Revenue when making an online purchase from any retailer that does not collect sales tax. After 2013, responsibility for collecting and remitting the Tennessee tax will shift to the company. In the event that the U.S. Congress acts before January 1, 2014, all online retailers will collect sales tax at the time federal legislation is enacted.

The agreement will be presented to the Tennessee General Assembly as legislation for consideration when members convene in January.

"It's a big deal for us," said Paul Misner, Amazon vice president. "As for the sales tax issue, it must be resolved in Congress. It's the only way the state of Tennessee will be able to obtain all the sales tax revenue that can be collected for the state, and we are committed to going to Washington with the state's leaders both here in Nashville and Washington, D.C., to obtain that sales tax legislation as soon as possible."

"Right now they are ramping up to employ 3,000 people between now and Christmas," he said of the company. Asked about the continuing nationwide controversy over state sales tax revenue collection from Internet retailers such as Amazon, which has erupted in battles with state authorities in Texas and California, he said, "I think we made the right deal at the right time. In talking with people at Amazon, I think they know their time is limited as far as how long they can run with this model: It will be a national issue — you can't resolve it state by state. Some time in the future the way they pay taxes will change. Right now it's good business for Chattanooga. And I'm sure they're employing people from the entire region."

The University of Tennessee has received a five-year, $18-million award from the National Science Foundation and the U.S. Dept. of Energy to lead an NSF Engineering Research Center to address power transmission systems. The new center, called CURENT (Center for Ultra-wide-area Resilient Electric Energy Transmission Networks), involves a consortium of academia, industry and national laboratories.

"Our country is in a defining moment in history as it relates to the urgency to address the aging infrastructure and managing our energy needs," said Chancellor Jimmy G. Cheek. "This award propels UT to the front lines both domestically and internationally of smart-grid research. We have the leading experts and the sophisticated tools to develop the transformational technology that will make our power grid greener, safer, and smarter."

An array of auto component manufacturers have flocked to locations across Tennessee over the past year to supply assembly operations in the Southeast.

Galway, Ireland-based C&F Group is investing $12.5 million to locate a facility in Kingsport. The company, which was formed in 1989, looked at more than 20 Southeastern locations, said Tom Hyland, president, C&F Manufacturing USA. C&F said it will create 450 jobs over four years at the plant, which will be its first in the U.S. C&F, which will locate in the Northeast Tennessee Business Park, specializes in production of aluminum and steel decorative and functional trim components.

SL Tennessee, a subsidiary of the South Korea-based SL Corp., is investing $14 million in an expansion of its facilities in Clinton, which it says will create 100 jobs and add 175,000 sq. ft. (16,257 sq. m.) to the company's manufacturing complex. SL Tennessee supplies parts to General Motors, and this is the company's fourth expansion in Clinton within the last decade. SL Tennessee, located in the Interstate 75 Industrial Park, manufactures automotive parts including gear shifters, parking brakes and lighting products. In 2001, the firm became the first Korean-owned automobile parts manufacturer in the Volunteer State when the Clinton facility opened.