On the Rebound?
Or Never Came Down?

FDI levels are rising in India. So are actual projects,
thanks to government approvals and infrastructure needs.

An artist’s rendering of a proposed Infocity being planned by leading Indian developer Shapoorji & Pallonji.
by B. NITIN RAO
D 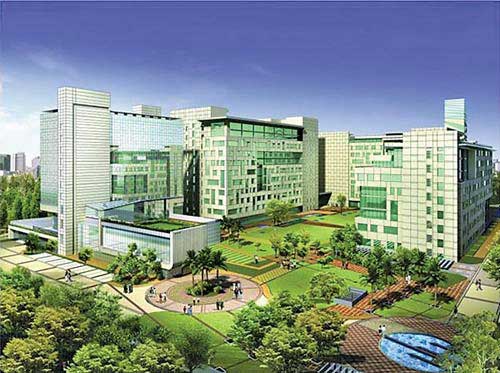 A proposed IT park being developed by Shapoorji & Pallonji.

riving along the Old Mahabalipuram Road (OMR) in Chennai, the capital of the southern Indian state of Tamil Nadu, you come across scores of construction sites with hundreds of workers busily laboring on, even as the sun sets across the Bay of Bengal, just a mile to the east.

Traffic zips across on the wide artery — dubbed the IT corridor — as thousands of employees working at several multinational companies in the information and IT enabled services sector head home, even as others report for the night shift at BPOs and other facilities.

Chennai, once a quiet, laid-back and conservative city, has emerged as a vibrant automobile and information technology hub, attracting hundreds of Indian and international companies lured by lower real estate costs, better lifestyle and saner traffic conditions. And the 30-mile (48-km.) IT corridor — the first phase, covering about 12 miles (19 km.), is now nearing completion. OMR is today bustling with activity as corporations have once again started investing in real estate.

Indeed, at a time when the threat of a double-dip recession is hovering ominously over several economies across the globe, India continues to confound observers with its unusually buoyant economic indicators.

Take foreign direct investment (FDI) inflows, for instance. In June, the inflows shot up by a phenomenal 300 percent, touching US$5.65 billion, the second-highest monthly inflow in more than a decade. This was on the back of a 111-percent jump in inflows in May, when FDI added up to $4.66 billion.

In the first quarter of the current fiscal year (India’s financial year starts in April), FDI inflows at $13.44 billion shot up by 133 percent in comparison with the first quarter of the previous fiscal year. In fact, 2011 has been a remarkable year for India in terms of global investment inflows. During the first six months of the year (January-June), FDI inflows were up by a hefty 53.8 percent at $16.68 billion.

Analysts expect fiscal 2011-12 could prove to be a record year for foreign capital inflows, perhaps even topping $35 billion. Unlike foreign institutional investments, or portfolio inflows that are invested in the stock markets, FDI represents long-term capital that goes into the acquisition of productive assets, contributing to economic expansion and generating jobs.

Worryingly for the government, FDI inflows stalled in the wake of the global recession and declined sharply over the past three years. In 2008-09, India attracted $27.3 billion in FDI; it fell to $25.6 billion a year later and plunged to $19.43 billion for fiscal 2010-11.

According to the World Investment Report from the United Nations Conference on Trade and Development (UNCTAD), India slipped six notches to the 14th spot in the global rankings of economies attracting FDI. (The UNCTAD report, along with many other international studies, considers the calendar year for FDI inflows, and not India’s financial year; this results in variations in FDI inflow figures).

Recent months have seen the Indian government tackle formidable issues that have stalled FDI inflows. A committee of top bureaucrats recently recommended allowing 51 percent FDI in multi-brand retailing; top international retailers including Walmart of the U.S., Tesco from Britain and Carrefour from France, are eagerly awaiting opening up of the retail sector (at present FDI is allowed in single-brand retail outlets).

One reason for the slowdown in FDI was the opposition from several environmental activists to the setting up of megaprojects, especially in the metals and mining sectors, in sensitive regions of eastern India, where locals were also opposed to the projects. However, after much political debate and even court battles, some of the proposed ventures are now getting clearances.

These include a $12-billion project by South Korean steel giant Posco to set up a plant in the eastern state of Orissa. The federal environment ministry approved the project recently, and work is expected to begin soon, along with the inflow of funds.

India’s funding needs are indeed huge. The government estimates that the infrastructure sector — including airports, ports, highways and expressways, and power plants —needs about $1 trillion in investments over the next five years. While government and Indian private sector investments would be able to partly fund these ambitious projects, there are huge opportunities for global investors in the coming years.

Says Arun Maira, member of the government’s Planning Commission: “India will continue to be an attractive investment destination in the long run because we know that revenue streams will come from big markets like India and China, as they are yet to realize their full potential, unlike saturated markets of the U.S. and EU.” He says, however, that there could be some fluctuations in the near term as investors would need money to repay debts in the U.S.

FDI inflows into India usually end up in about a dozen investor-friendly states. These include a few southern states (Tamil Nadu, Karnataka and Andhra Pradesh), two western ones (Maharashtra and Gujarat) and a couple of northern ones (Delhi and Haryana). Mineral resources-rich states of eastern India are also attracting global investor attention of late, though the process of getting the proposals cleared (from both environmental and legal aspects) can be a drawn-out one.

Significant opportunities are also available in either investing or partnering with existing players, in sectors such as special economic zones, IT parks, bio-technology complexes and even semiconductor complexes. The high-tech sector, despite the slowdown in the developed world, continues to grow at a healthy clip and demand for space in these facilities continues to remain high.

In Pune, for instance, according to Jones Lang LaSalle’s Asia Pacific Property Digest blog on August 2, both absorption and leasing activity remained robust in the first half of the 2011 calendar year. Net overall absorption was 2.3 million sq. ft. (213,591 sq. m.), with nearly two-thirds of that total leased during the second quarter. “Over the past one year, we have seen occupiers’ focus shift towards SEZ units,” the report said, “which was clearly visible as IT SEZs accounted for approximately 66 percent, i.e. 1.51 million sq. ft. (140,890 sq. m.), of the total space absorbed in 1H11.” 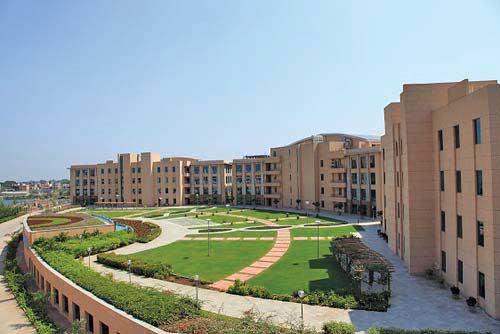 The SP Infocity at Pune, which has emerged as another leading IT hub in India. 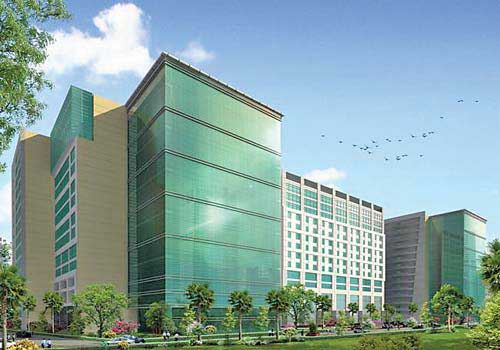 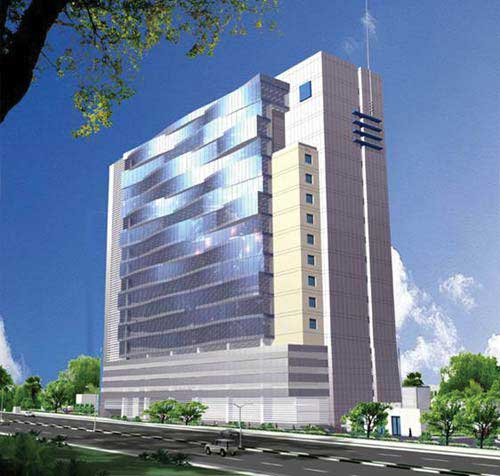 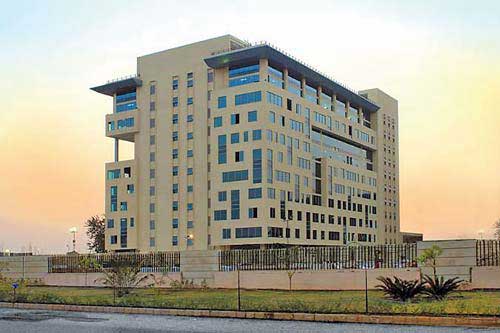 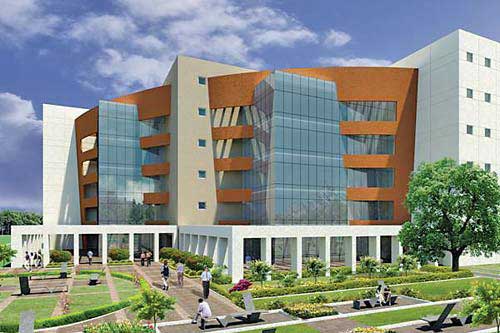 The SP Infocity at Nagpur in central India.
S

hapoorji Pallonji is a 140-year-old construction group that has to its credit over 10 million sq. ft. (929,000 sq. m.) of built-up space in more than 40 IT parks. The following excerpts are from an interview with Rayomand Dastur, executive vice-president, sales and marketing, Shapoorji Pallonji Real Estate:

Site Selection: What are the factors that have attracted developers to put up IT complexes and special economic zones (SEZs) in the western Indian state of Maharashtra?

Pune, for instance, is an attractive location for IT and IT Enabled Service SEZs, both because of its emergence as a major IT hub and the availability of talent from its numerous educational institutes. The city is also a favored destination due to its moderate climate and being a hub for auto manufacturers, which has attracted several auto ancillary companies. In terms of IT space, Pune has a total stock of about 13 million sq. ft. (1.2 million sq. m.) of IT SEZ space and 17 million sq. ft. (1.6 million sq. m.) of IT non-SEZ space.

Mumbai, the state capital, is not an IT hub like Pune. This is primarily due to the historical prominence of banking, financial sector and insurance companies in the city. In terms of IT space, Mumbai has a total stock of about 4 million sq. ft. (371,600 sq. m.) of IT SEZ space and 40 million sq. ft. (3.7 million sq. m.) of IT non-SEZ space. This relative shortage of SEZ space in Mumbai is due to the fact that the city’s high land prices mean it’s only financially feasible to construct expansive SEZ development in very peripheral areas of Mumbai, where land is relatively cheaper.

SS: Is there good response from the IT sector to the opening up of these major complexes?

RD: In Mumbai, vacancy level in SEZ IT space is just 5 percent, whereas in non-SEZ IT space it is 23 percent. This indicates relatively strong demand for SEZs.

SS: How many such projects has your company executed?

RD: SP Real Estate owns two IT/ITES projects in the state of Maharashtra. We have developed these projects under the brand name of SP Infocity, one in Pune and other in Nagpur. IT companies pay special attention to brand of developer and the social infrastructure inside and around the project.

More than 8,000 professionals of different IT clients like IBM, BNY Mellon, ADP, Syntel, and Honeywell, among many others, enjoy facilities like a clubhouse, health and spa centers, swimming pools and vast open spaces offered by our project.

SS: What are the factors that an international investor looks for while investing in such parks and special zones?

SS: Do you see other exclusive complexes coming up in Pune/Maharashtra in other areas including biotechnology, nanotechnology and chip-making?

RD: These specialized technology hubs need government agencies’ support. The past evidence suggests these developments have happened in the states where government-funded research institutions are already available. Another important aspect is availability of power and technical skills. So we need to work more to attract such kinds of specialized developments in Maharashtra.


Two Cerebrums Better Than One

umar Urban Development Ltd is a major developer of IT parks in India. Kruti Jain, director of the company, talks about her company’s experience in putting up these projects.

On response from international companies:
IT majors from across the globe are coming to India, especially a city like Pune, which now hosts companies such as IBM, Microsoft, Infosys and Oracle. IT parks are flourishing in the city.
In fact, Pune is the best suited location for the software industry due to its excellent weather conditions and its proximity to Mumbai. The expressway has really shrunk the travel time between Pune and Mumbai.

On factors that international investors seek:
They look basically for the availability of skilled professionals and IT infrastructure, which Pune can provide. Moreover, IT professionals from Mumbai add to the talent pool.

ANGALORE, the capital of the southern Indian state of Karnataka, is also known as the Silicon Valley of India, because of the presence of a large number of IT and other high-tech firms. The government of Karnataka has for years been encouraging the setting up of specialized IT parks in and around Bangalore. The city today boasts of some of the top such facilities to have cropped up in India.

Brigade Group, a leading Bangalore-based developer, has been promoting software and IT parks, SEZs and other facilities for the vibrant high-tech sector. Its latest venture is the World Trade Center Bangalore at Brigade Gateway.