Rain reuse via syphonic drainage is among this new facility’s LEED attributes. 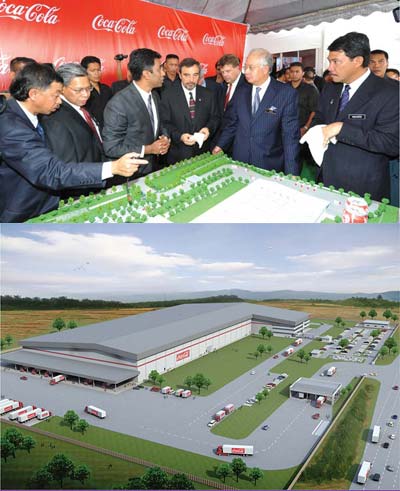 oca-Cola Bottlers Malaysia is going it alone. Coke’s franchise agreement with local bottler Fraser & Neave Holdings Bhd is set to expire in September. In March 2010, Coke announced plans to invest US$302 million in a new bottling facility in Negeri Sembilan, south of Kuala Lumpur, that will produce the company’s full line of soft drinks, water and juice products. Sites near Johor Bahru in the south of the country and on an island off the west coast (with just one bridge to the mainland) were considered and eliminated in favor of the Negeri Sembilan location with its proximity to the Kuala Lumpur market. The Enstek plant will employ more than 600 directly, and 10 times that at local suppliers and distributors.

“Within a year of the groundbreaking, we produced our first bottle,” says Vamsi Mohan, general manager. “We are very pleased that we could bring the facility to the manufacturing stage within a year, and the plant is now producing. Previously, we were importing our Minute Maid products from China into the Malaysian market. Now it’s local production.”

Mohan cites the cooperative role of the government in helping keep the project on schedule. “The governmental agencies closely guided us through the process to its logical conclusion.”

Mohan says the plant is built to cater to the capacity requirements of the Malaysian market for the next two to three years. Expansion plans call for doubling capacity within a few years, after which other sites will be considered for additional production. “At least until 2013 or 2014, we are good to go at this site,” he relates.

World Class in Every Sense

Enstek is being built as a Coca-Cola Center of Excellence, which Mohan says means “world class in terms of operating standards, safety standards and environmental standards. There is one in China and one in the Philippines, and Enstek will be one from day one. It’s a journey, but all of these principles are being incorporated.”

The greenfield plant is green in several ways, not the least of which are its LEED design and numerous sustainability features. These include roof-water harvesting from the 10-acre building (it rains on average 250 days per year) using a syphonic drainage system that directs rainwater to production uses. Approximately 10 percent to 15 percent of the plant’s water usage is from rain. Additional features include effluent water and backwash reuse, air rinsing of cans rather than water rinsing, a building automation system to regulate temperature, low-energy conveyor motors, solar heating, skylights, process heating recovery and reuse and many others.

“From the beginning, everything from construction-based disposal, the way the environmental specifications are designed, forest-certified wood for furniture — everything had to be about getting LEED points,” says Mohan. “It takes a long time, and we are a work in progress. We are going for Silver, and we are well on our way down that path.”